The 43-year-old lawyer, appointed by Governor Martin O’Malley to his state post in 2009, replaces Peter O’Malley, the governor’s younger brother, who left the chief of staff post last month after a nine-month tenure, which followed the departure of the mayor’s inaugural COS, Sophie Dagenais.

Sanchez also succeeds the very short reign of Thomasina (Tomi) Hiers as interim chief of staff, who announced her return to state government.

A native of Cleveland, Ohio, Sanchez has maintained a low profile in a state agency with little public presence, despite its handling of many state regulatory functions and boasting a workforce of over 2,000 employees.

Prior to coming to Maryland and serving on a welter of O’Malley task forces in 2009, Sanchez served as senior vice president for Community Impact Leadership at the United Way of America.

Prior to that, he was CEO of United Neighborhood Centers of America, a national non-profit organization, and executive director for the Hispanic National Bar Association and Foundation. 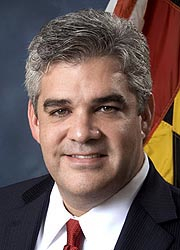 In a statement released by her office today, Mayor Rawlings-Blake said that Sanchez will further her initiative to grow Baltimore’s population by 10,000 families  – a program that had been  spearheaded by the younger O’Malley prior to his departure.

Rawlings-Blake lauded Sanchez’s “wealth of great experience” and said his knowledge about workforce development issues “will go a long way to help strengthen our efforts to expand job opportunities and get Baltimore growing again.”

Gov. O’Malley also weighed in this morning, calling Sanchez “a highly-effective member of my Cabinet over the past three years.”

“Mayor Rawlings-Blake,” he added, “is getting a very capable, talented and professional leader that will help drive progress in Baltimore City.”

Sanchez himself had little to say this morning.

He was quoted in the mayor’s release as calling his appointment “a great honor” and lauding the mayor’s “record of achievement and success,” which were described as reducing crime to historic lows, strengthening public schools and reducing property taxes.

(Veracity note: the latter two mentions or allusions – increasing school construction spending and cutting the property tax rate by two cents – have not yet gone into effect, with the bottle tax bottled up in the City Council.)

(Also: kudos to Hassan Giordano who called out the Sanchez appointment in his weekend Baltimore Examiner column.)