Diving police, trying to remove a derelict boat from a Fells Point dock, considered using a high-explosive “detonation cord” to blow the boat out the water.

The IG investigation arose from a federal lawsuit, previously reported on by The Brew, by a former BPD officer who said he was ostracized from the marine unit after he blew the whistle on its activities.

Though on a much smaller scale than the federal charges against the disgraced Gun Trace Task Force, yesterday’s report describes an unsupervised police team concocting far-fetched schemes to remove a weather-beaten boat and demonstrate the skills of its diving-enthusiast leader.

The report confirms some of the charges made in the suit by ex-cop Jeffry E. Taylor, while adding a new wrinkle – that removal of the cabin cruiser “Danger Zone” could have been done for free.

The Maryland Department of Natural Resources has a program where abandoned boats in public waterways are removed at no cost to the local jurisdiction.

DNR officials confirmed to Cumming’s investigators that the agency would have done the work for free – if asked. But “contrary to statements provided during the investigation” by police, the marine unit made no attempt to contact the DNR, the report said.

Instead, the six-member unit plunged into its own salvage attempts, which took three months (December 2016-February 2017) and involved various schemes to dislodge the boat from its partially-submerged pilings. 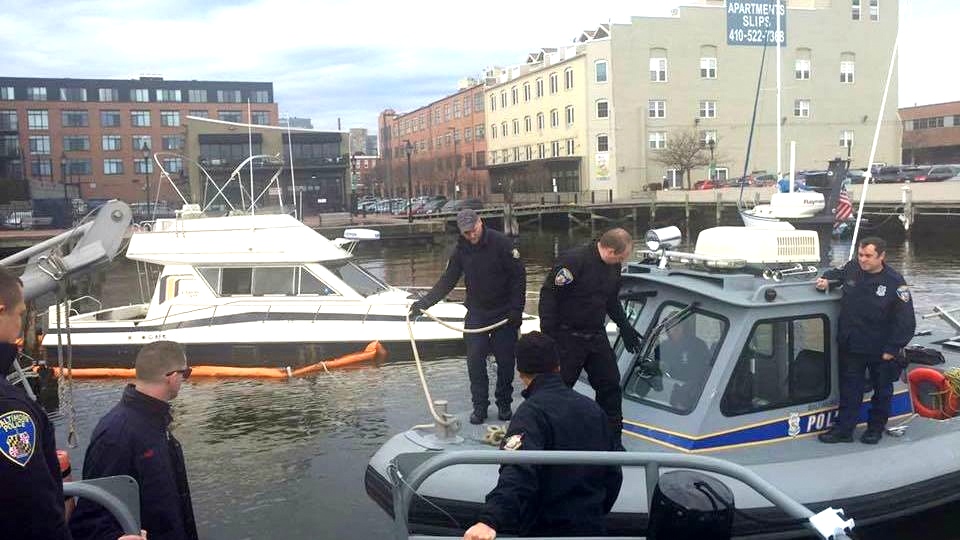 BPD’s marine unit and urban rescue team work to clear pilings as part of a months-long operation to remove “Danger Zone” from its moorings off Fells Point. (@BPDmarineunit)

One operation deployed a towline, stretched from the boat to a police utility truck stationed on shore, to try to move “Danger Zone” off the pilings.

It didn’t work. Neither did towlines attached to a smaller and then larger police boat.

Frustrated by its lack of success, the marine unit twice approached the BPD Bomb Squad about wrapping an Army-style detonation cord, which holds high explosives within a plastic tube, around the pilings. “The bomb squad officers denied the requests,” the report noted.

“This is what special forces do to secure a helicopter pad in the jungle.”

A police source told The Brew that use of such explosives would have amounted to a military operation in the middle of the harbor, exposing other boats – not to speak of residents and visitors along waterfront Fells Point and Canton – to potential danger.

“This is what Special Forces do to secure a helicopter pad in the jungle,” said the source, who was not authorized to discuss BPD internal affairs.

The IG report confirmed allegations by Taylor of misspending and potential overtime abuse by the marine unit without naming the person in charge of the operation, Sgt. Kurt Roepcke.

Roepcke remains head of the marine unit, according to the police department. A snorkeling aficionado, he started the underwater recovery team during the Frederick Bealefeld administration despite the fact that both the Baltimore Fire Department and DNR have diving teams.

In investigating the allegations made by Taylor, the IG was given “conflicting accounts between senior police commanders, mid-level managers and the supervisor,” the report said.

In particular, “a BPD officer” provided misleading information to a superior about the purchase of a $900 underwater chainsaw used in the “Danger Zone” operation.

The officer said that the chainsaw was borrowed from a vendor when, in fact, it was paid for by the city under a requisition order that did not follow administrative procedures, the report said.

Regarding improper overtime alleged in the lawsuit, the police department told IG investigators in writing that no overtime or compensatory time was paid to officers involved in the boat salvage.

This was not accurate, according to the report.

“A review of BPD records revealed at least three occasions where overtime [or] compensatory time was paid to officers as part of the salvage operation.” 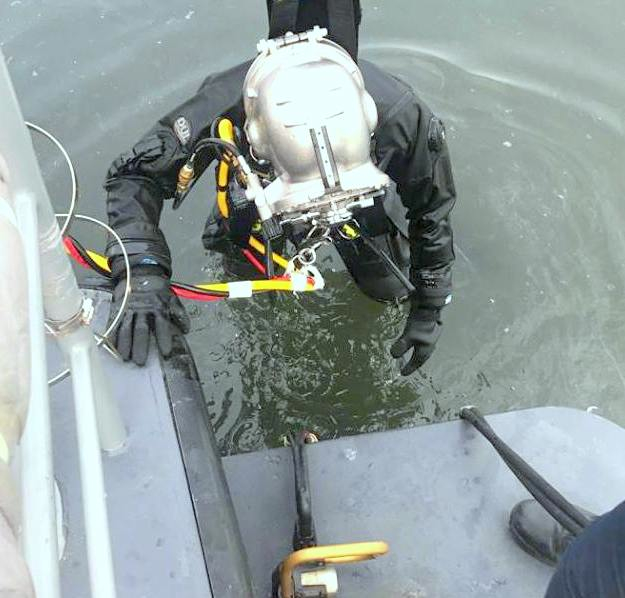 Sgt. Kurt Roepcke with the underwater chainsaw used to cut pilings away from the boat’s hull. The IG says the saw was improperly purchased. (@BPDmarineunit)

Evidence of Cover -Up

There was other evidence of efforts made to hide the origin of the operation and the activities of the marine unit.

The IG, for example, was given two copies of the same internal BPD report about the “Danger Zone” salvage.

“In some instances, the information provided in the [two copies] was different,” the report said, without specifying the differences.

The IG was given two copies of the same BPD report. Each had different information.

According to Taylor’s lawsuit, Melissa Hyatt instructed Roepcke to remove the boat in December 2016. Then a rising BPD commander, Hyatt reportedly acted on a complaint by an acquaintance, who considered the vessel an eyesore, even though it was legally moored at the dock.

Hyatt, who was named Baltimore County’s new police chief last month, is not referred to in the IG report. 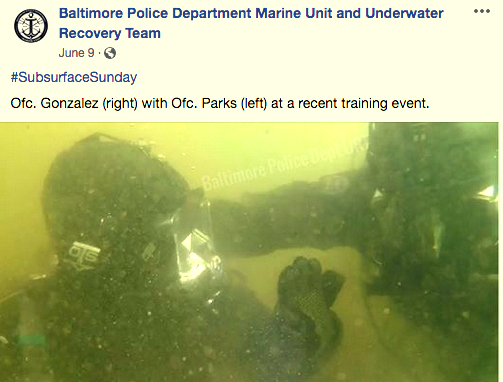 Ultimately, the marine unit moved the badly-damaged cabin cruiser to a pier on Boston Street, where trouble again ensued.

A Department of Transportation tow truck was incapable of lifting the boat from the harbor. Eventually, the BPD hired a private company to remove the boat and dispose of its remains, which cost the city $7,367, the report said.

At least publicly, the response by the BPD to the “Danger Zone” investigation has been muted.

In a letter to the IG, Commissioner Michael Harrison outlined several procedural changes and a promise.

He said that management personnel will visit the marine unit “multiple times per week” and will make sure all personnel “have the necessary skills and training to properly fulfill the unit’s responsibilities.”

The unit’s supervisor (presumably Roepcke) will now be “responsible for submitting a weekly calendar to management which outlines events for which the marine unit participates.”

Most significantly, the IG report “has been forwarded to [the] Public Integrity Bureau for appropriate disciplinary action,” Harrison wrote. 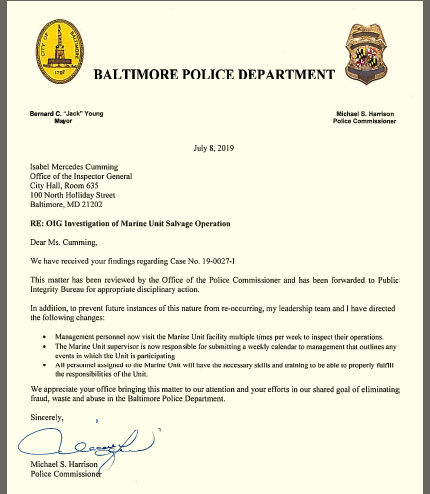 Letter by Police Commissioner Michael Harrison in response to the IG’s critical report on the marine operation.