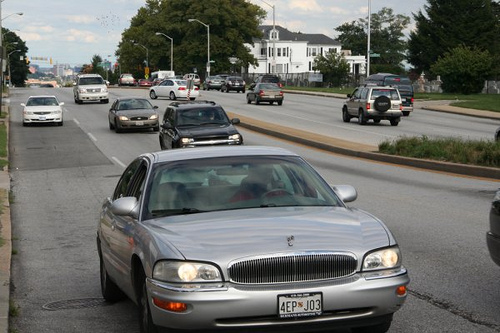 Would light rail down the middle of Baltimore

Today’s CAFFEINATED COMMENTARY is on the Red Line, the proposed east-west transit line for Baltimore. The business, political and civic leaders lined up to support it call it “4C.” The terms used by some transit advocates and residents of affected neighborhoods are occasionally unprintable . . .

Governor Martin O’Malley’s choice of light rail Alternative 4C as the Locally Preferred Alternative (LPA) for the Red Line project is the culmination of a seven-year campaign to build a new transit line to suit business and development interests.

What could have been a great project to improve mobility has become, first and foremost, about real estate, with big developers eyeing parcels in West Baltimore and pipeline projects along the southeast waterfront. Support for 4C has come largely from the Greater Baltimore Committee and their affiliate institutions, the city’s movers and shakers. That would be okay, if not for this fact: the Red Line is simply wrong as transit and a wrong decision for Baltimore.

I don’t live near the proposed 4C route, I’m speaking here as a longtime transit advocate.

((Another mug ‘o commentary we’re pouring today: “Time for some myth-busting on the Red Line,” by Jamie Kendrick, deputy director of the Baltimore City Department of Transportation.))

The Red Line will be slow.
Yes, it would have those tunnels, but it would actually operate a bit slower than our famously sluggish existing Light Rail. (Actually, the Light Rail moves much more quickly outside the center of the city, where it can generally operate in a segregated right-of-way.) Compared to the subway, the Red Line would be really slow.

How do all these compare, exactly? Baltimore’s Light Rail averages some 21 mph, the Red Line would average less than 20 mph under ideal circumstances and, meanwhile, our high-performance Metro (heavy rail) is besting 30 mph.

The Red Line, even with those tunnels, would still suffer some five miles of street-surface operation, where it would be forced to operate at the posted speed limit and encounter potential delays with traffic signals and obstructing traffic. Don’t be dismissive of speed. This may go against the wisdom of some urban planners, who consider “place-making” above the transit they intend to provide and insist that street rail is the antidote to our woes.

The fact is that speed matters: higher-speed services have the attractiveness to get choice riders out of their cars and onto transit. Speed is time and time is money. It allows those who can’t afford cars to be able to travel throughout Baltimore to their jobs, to their schools and to their homes in less time. It allows people to live fuller lives, instead of waiting for an infrequent bus or sitting on an idling light rail vehicle. I think many realize the incongruity of our efforts to spend $1.6 billion and provide more slow service.

The Red Line won’t be safe.
That five-mile portion to be operated on city streets impairs not only reliability, but also safety. The Red Line LPA would have the tightest dedicated two-lane transit-way yet built (22.5 feet) because space on both Edmondson Ave. and Boston St. is extremely limited. The 50,000 vehicles-per-day right now on Edmondson Ave include large numbers of full-size trucks that would be a mere three feet from passing trains, with only a curb as protection. Patrons at the proposed Allendale Station on Edmondson would be waiting on a narrow island platform between the tracks and zooming traffic.

Research tentatively indicates that nowhere else in the country has light rail, with fully-dedicated lanes, been built for streets with as much traffic as Boston and Edmondson. The loss of lanes will create bottlenecks and create more congestion and lost time. Some advocates say: Good! Traffic goes slower, so more people ride transit. I say: Bad! Because the reduced road capacity leads to slower traffic, which in turn slows down the connecting bus system.

The recent revelation that the Cooks Lane tunnel would be single-tracked adds insult to injury. The MTA professed early with great exuberance that the Red Line would move beyond the single-track mistakes of our earlier line. Now they backpedal and introduce a one-tube tunnel with a blind curve creating a potential deathtrap. What a way to cut corners in a desperate attempt to meet cost-effectiveness!

The Red Line won’t tie the system together.
Despite the rhetoric from the GBC and its president, Don Fry, 4C would not do much to connect and integrate Baltimore’s disjointed transit. The two-block long transfer at Charles Center with the existing Metro subway line would be the greatest distance between two stations intended as a connection for any U.S. transit system since federal financing began in the 1960’s. We already have one of these non-connecting “connections” in town — the much-maligned 1 to 1.5-block transfer between the existing Light Rail and the Metro at Lexington Market. Why should we build an even longer one?

The eastside waterfront alignment would be an anomaly among regional systems. Service so close to the water severely limits a station’s accessibility (fish tend not to ride). Even most in Canton would find their station inconvenient.

The Red Line has low maximum capacity.
If the MTA’s new, larger Red Line ridership projections are to be believed (the product of a convenient new travel model released recently) the proposed east-west line could quickly max out.
The Metro carries about 3,600 people per hour during the peak morning commuting period. I have estimated, based on its physical limitations, that the Red Line will only be able to accommodate 2,400 people per hour, per direction. (Their peak-hour ridership of about 1,800 puts them already at 75% of their maximum capacity.)

Furthermore, future extensions to Dundalk and a fulfillment of our regional transit plan would actually max out the line. Ironically, popularity could render the Red Line obsolete.

The decision-making deck was stacked from the beginning.
Red Line alignment selection process was supposed to involve citizens, taxpayers, and communities and there were numerous meetings and comments put on file. But the options available for their consideration were unfairly limited. Through both the Ehrlich and O’Malley administrations, the Red Line study has been stocked with ridiculous straw man alternatives. Against federal guidelines, the Ehrlich administration removed Metro as a modal option. All the while MTA has inflexibly adhered to a rigid east-west alignment. In 2004, an alternative alignment and report recommended by its own Citizens Advisory Committee was never recognized.

Inner Harbor East  has dictated the destiny of the Red Line.

The quality, connectivity and flexibility of our entire regional system have been compromised because they hinge on serving this one location above all else, I would argue. Ensuring that the Red Line serves this nearly-complete, politically-juiced development — being pitched as the city’s “new downtown” — is the reason decision-makers have ruled out several much more affordable and sensible configurations, including several promising approaches backed by the Transit Riders Action Council of Metropolitan Baltimore. The best of these would have simply extended the existing Metro subway line east and west, using alignments neighborhoods could have more easily embraced.

The main reason these alternatives were never taken seriously? Because, they could not accommodate Inner Harbor East. A Red Line built as an extension of our current Metro could not be engineered to serve this new development. To reach Inner Harbor East from downtown, the Metro would have to be extended underground, in an area where tunneling is not feasible because of a tangle of old infrastructure, the foundations of high-rise buildings, valuable historic properties and proximity to the water.

Serving Inner Harbor East with an entirely new east-west subway line that would avoid these technical issues would be prohibitively expensive, requiring not only a new downtown tunnel but too much tunnel elsewhere to ever be cost-effective. The end result: extending Metro was pretty much off the table.

Rail transit service for Inner Harbor East is not without merit, but forgoing a station there in the near term allows far more options, including building the Red Line cost-effectively as Metro, with alignments that neighborhoods can embrace.

The Red Line won’t promote new development.
One of the promises made by Red Line boosters is that this kind of transit stimulates development. That’s actually not very likely, unfortunately, in this case. Harbor East is mostly built out already and the ridership projections in this and other east-side areas along the route are not impressive.

We’re constantly being told that the Red Line could be like light rail systems in cities like Portland or Seattle that seemed to spawn redevelopment. The problem is that all those other metro areas have much higher growth rates than Baltimore. The development there was coming anyway. The fairer comparison is to transit systems in places like Philly, Cleveland, Pittsburgh, St. Louis and Buffalo. Check out Philly’s light rail “subway-surface” lines: unending dreariness, and those lines have been there for more than a hundred years.

This need not be a done deal.
The preceding was only a snapshot of the laundry list of issues from the last seven years. But there are things we can do. We can initiate an expanded, supplementary Alternative Analysis to look at all reasonable options, including heavy rail and alternate alignments that would provide superior transit value, integrate into our neighborhoods, and have a competitive cost-effectiveness rating.

We can delay the construction start of the project 18 to 24 months to do this. Baltimore will survive. I don’t believe citizens and advocates will mind a wait as long as we’re working diligently toward financing and building our system. We can build a better Red Line by constructing an expensive option over a longer time frame. We can decide to forego federal funding, reposition our state priorities firmly toward transit, avoid the pork barrel mentality, and later on re-file for federal funding to construct extensions.

This LPA is not the only buildable choice. We can do this right.

Nathaniel Payer, who lives in Mount Vernon, is the Vice-President of the Transit Riders Action Council of Metropolitan Baltimore.