An international flotilla of tall ships and navy vessels is scheduled to enter the Inner Harbor on June 13 to kick off a three-year celebration of Baltimore’s part in the War of 1812.

The only problem is that the channel to the harbor is not deep enough to accommodate the 25 or so ships expected at the “Star-Spangled Sailabration” – and dredging by the city of Baltimore has not yet started.

A $1.1 million contract to open a 26-foot-deep channel from the Domino Sugar plant to Harborplace sailed through the city’s bidding process in record time last month and was approved by the Board of Estimates this week.

Jamie Kendrick, deputy director of the city Department of Transportation, which is responsible for the project, said the contract would be let “within 30 days.”

That leaves less than 100 days to complete the dredging in time for the Sailabration. The contract specifies that winning bidder, McLean Contracting Co., complete the job in 90 days or face a $10,000 penalty.

Kendrick expressed confidence Wednesday that dredging would be finished on time.

McLean beat out three other marine companies to win the contract, which came in 54% below the city’s estimate.

The dredging will be paid for by state motor vehicle taxes allocated to the city.

The project caught Eliza Steinmeier Smith, head of the Baltimore Harbor Waterkeeper, by surprise. “I haven’t heard anything about this,” she said, expressing concern that there were no local hearings on the plan.

“I want more information about how the dredging could affect the water column because we know there is a lot of toxic stuff in the sediment,” she said. “When you dredge, you move around the sediment, and that raises a red flag.”

The Chesapeake Bay Foundation does not typically review “routine dredging of harbor channels unless there is a major wetlands impact,” said vice president Jon Mueller. The environmental group did not review the Inner Harbor plan, he said. 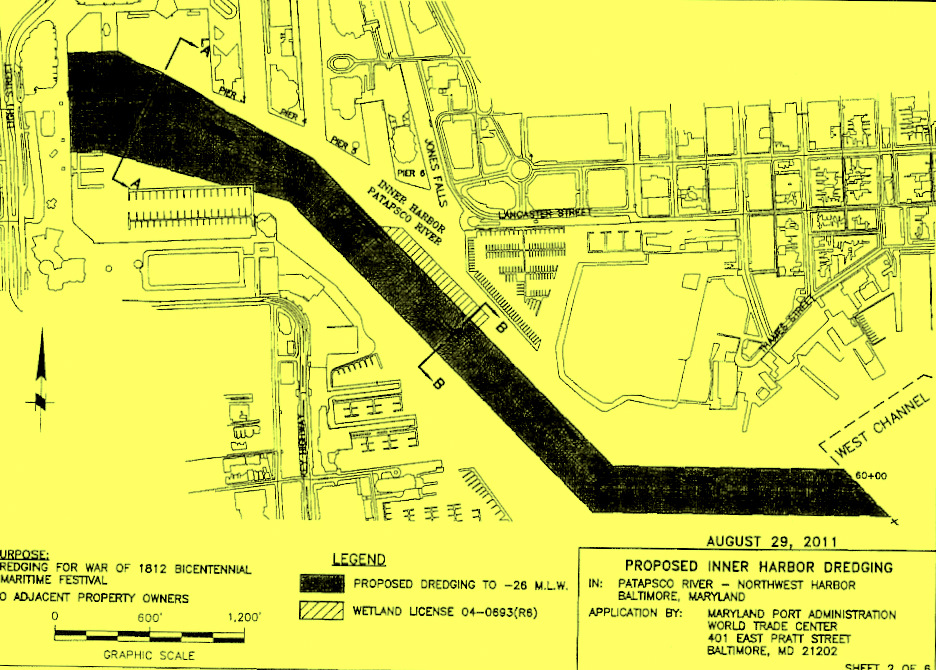 Map of the new channel, between 300 and 600 feet wide, needed to fit 25 or so ships into the Inner Harbor in early June. (U.S. Army Corps. of Engineers, Baltimore District)

The dredging will start at the 40-foot-deep “West Channel” that lets bulk carriers dock at Domino’s South Baltimore plant and proceed to the Light Street shore of the Inner Harbor past the Jones Falls, Piers 3-6 and the Harbor East and Rusty Scupper marina areas.

A permit issued by the U.S. Army Corps of Engineers allows for dredging 120,000 cubic yards of sediment to reach 26 feet below mean low water. The permit authorizes maintenance dredging of the new channel through year 2021.

Much of the Inner Harbor has depths of 18 to 30 feet, including the remnants of an old channel. The city contract calls for removing 80,000 cubic yards of sediment and 100 tons of debris.

Because sediment in Baltimore Harbor is considered contaminated, state law requires that dredged material be placed in approved containment sites owned by the Maryland Port Administration at Cox Creek or Masonville.

The project required a state tidal wetlands license, which was granted in December by the Maryland Board of Public Works following a review by the Maryland Department of the Environment.

According to MDE spokesman Jay Apperson, the agency reviewed the potential ecological effects on fish and migrating birds – as well as the potential economic and recreational benefits of dredging – and recommended approval of the license.

The new channel will pass within 200 feet of the southwest tip of Harbor Point, site of the former Allied Chemical plant that discharged chromium and other wastes into the harbor for 140 years before operations ceased in 1985.

The site was part of a $110 million “Superfund” cleanup by the U.S. Environmental Protection Agency. The 27-acre site is now owned by developer John Paterakis Sr., whose organization landed the new Exelon headquarters building.

The June 13-19 Inner Harbor Sailabration will feature tall ships and warships from Brazil, Columbia, Ecuador, Indonesia, Mexico and the U.S.

The U.S. Navy Blue Angels squadron is scheduled to fly over the Inner Harbor on June 16 and 17.

This will be followed by Baltimore’s celebration of “two centuries of peace” since the 1812 war.