Passersby might think that the big white bird painted on the front of the vacant former fried chicken joint at Charles Street and North Avenue is a dove and simply one of the countless murals Baltimore has used for years to perk up struggling neighborhoods.

They’d be sort of right . . . but off by several orders of magnitude.

The artwork is the first of at least 20 to be painted in the Station North Arts & Entertainment District by local, national and international artists as part of the nearly $100,000 Open Walls Baltimore project. And the bird, shown held in a human hand, is actually a carrier pigeon, says the artist.

“It’s a bird that has a relationship with man – we affect it. People have this relationship with the natural world that’s complicated,” said Gaia, Baltimore’s homegrown (and now world-renowned) street artist, who is curating the show.

“It’s maybe, less a metaphor than a straight appreciation of this beautiful bird.”

But what message is the pigeon and the whole project – sponsored by PNC Bank, a National Endowment for the Arts grant and other donors – delivering?

(Gaia will surely be asked this tonight at 5:30 at the Windup Space, when Mayor Stephanie Rawlings-Blake and others kick off the three-month project.) 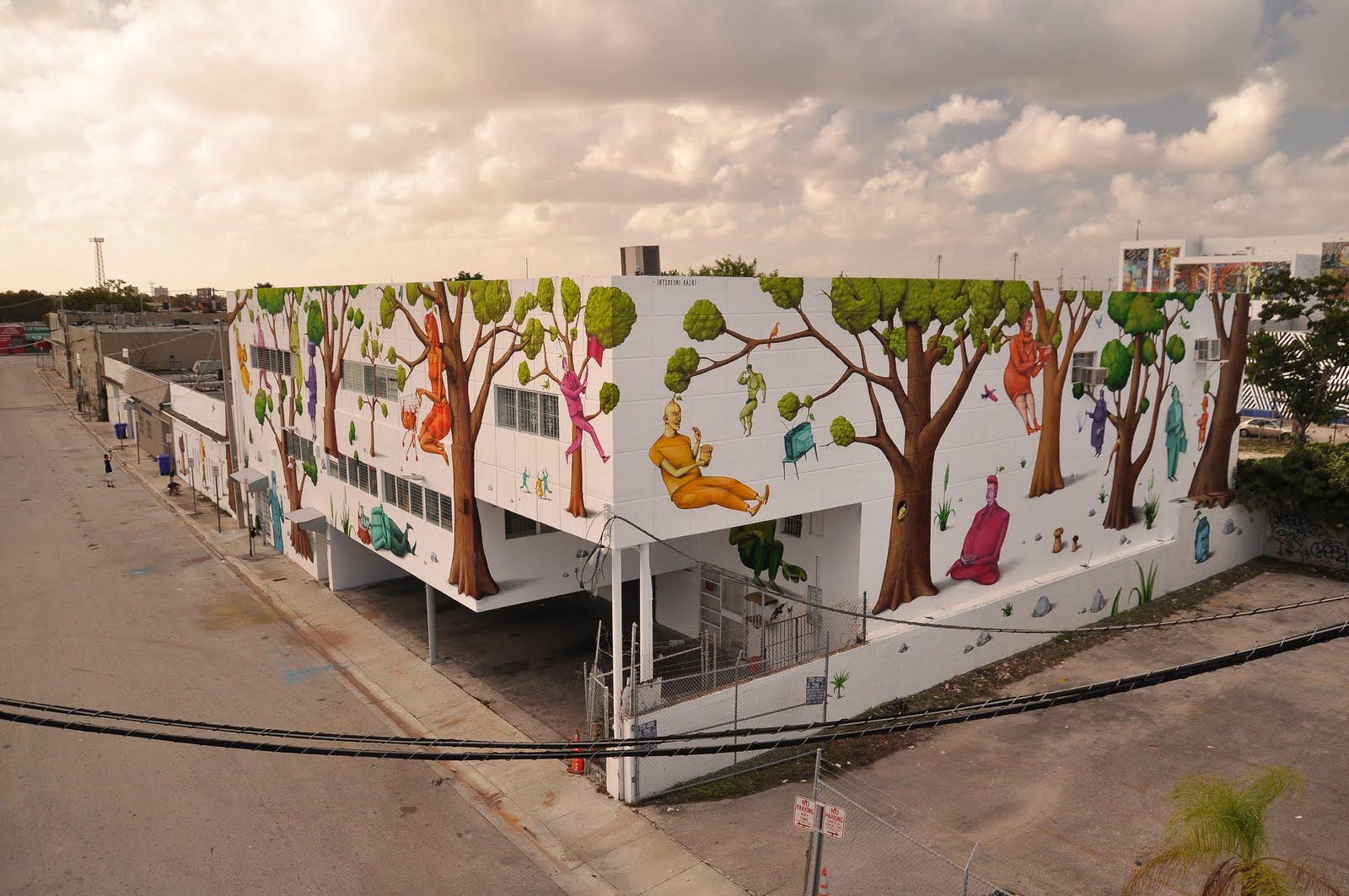 In Miami, "Flora of Ukraine," by the artists Interesni Kazki, who will be participating in Baltimore's "Open Walls" project. (Flickr)

But Gaia and other organizers also talk about how they want the murals to do so much more: to help them build a bridge between Station North and Greenmount West. The former may be a haven for artists, students and assorted hipsters, the latter an economically-challenged community of longtime residents, but they share the problem of blighted homes and vacant commercial buildings.

The Open Walls organizers view their large-scale, geographically-focused art-making as a kind of emergency oxygen treatment for two Baltimore communities that often seem, in their own ways, to be gasping for breath.

“We know that people are always more willing to invest in neighborhoods where they feel like somebody cares and there’s some community life,” said Ben Stone, Station North’s executive director. “This is going to bring in a lot of different people and really activate the neighborhood.”

So how did such a big-ticket project fall into the lap of a graffiti artist who still asks reporters to use his street tag (Gaia, primordial Earth-goddess of the ancient Greeks), which he adopted since his art form is in most cities technically illegal?

Gaia said it all began when he met a PNC bank executive at his senior year show at MICA and told him about some of the large-scale public art projects in other cities, such as Living Walls in Atlanta and Wynwood Walls in Miami.

“He asked me what it would cost to do that here,” Gaia recalled, “and I dropped a pretty conservative number and he was like, ‘Oh, word!’”

In other words, the bank guy liked it.

Not Your Father’s Murals

Asked what will differentiate the murals from the ones scattered across Baltimore, Stone notes that the quality will be good (“these are real artists who participate in juried shows) and that the scale will be large (“we’ve got a 40-foot lift truck.”) The second mural is being made on the 50-foot high wall of the parking garage across the street from the Charles Theatre.

Concentrating the art in one area will make it a kind of destination, he said and another distinguishing feature is that the artists will be using some unusual media.

“One of them is doing human body casts. Another is applying plaster and then chipping away at it” to make a bas relief, he said.

The Politics of Public Art

What to expect from the art? Some of the participating artists have a style that is abstract, while others’ is more representational, like that of Sten and Lex from Italy and Interesni Kazki, from Ukraine. 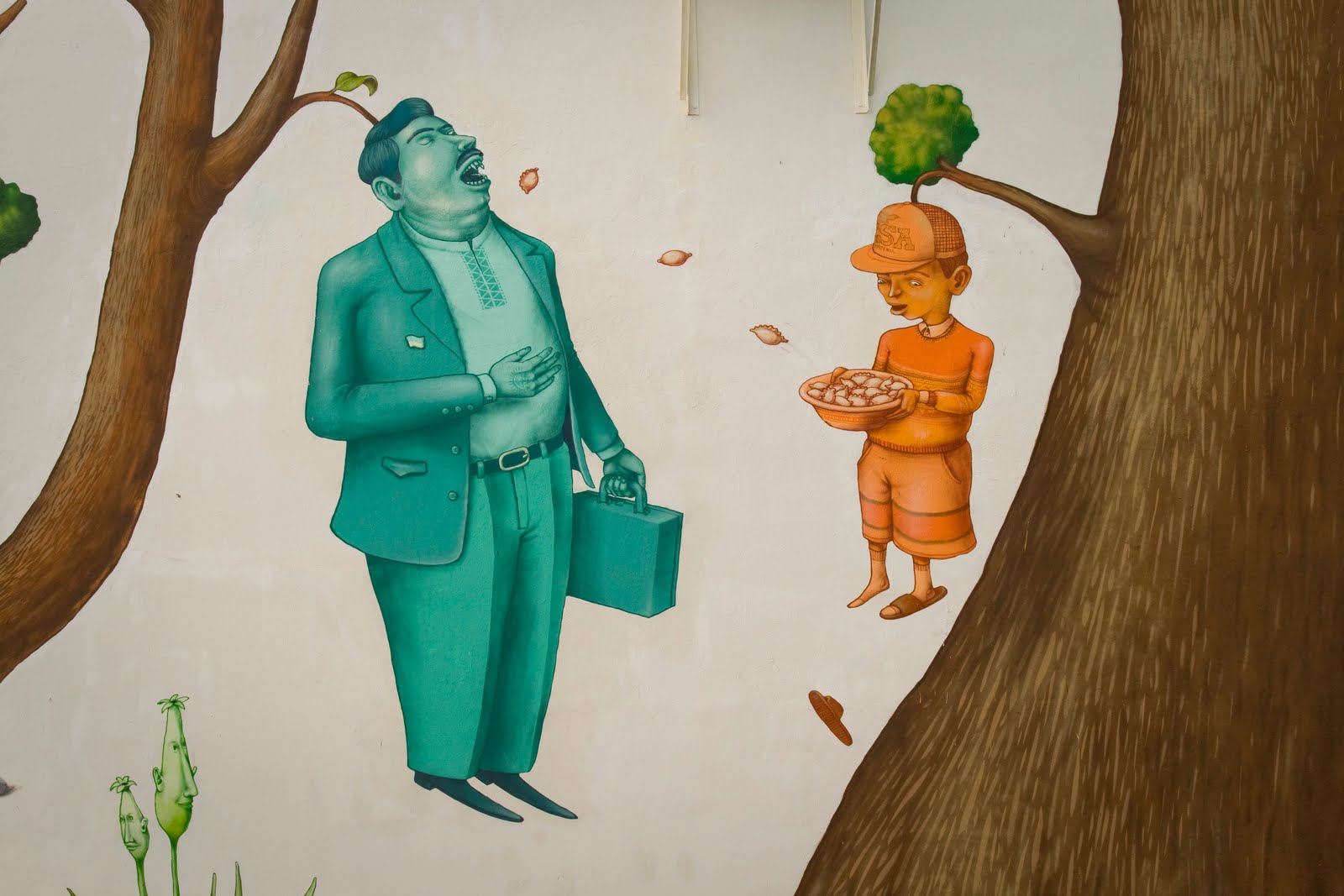 Interesni, in fact, wrapped a whole building in Miami with a work titled “Flora of Ukraine” that includes a traffic cop taking a bribe and a cross-legged meditator cradling money in his lap.

So, Stone was asked, will some of the Baltimore murals be not just representational but political? Not really, he said.

“A lot of street artists are extremely political and we mostly left out a lot of those,” he said. “We don’t want it to seem like we’re exploiting the walls of Baltimore for some political message, even if it’s a message we might happen to agree with.”

And yet they are artists, so “under the surface” there’s “inevitably” going to be some subtext, Stone observed. 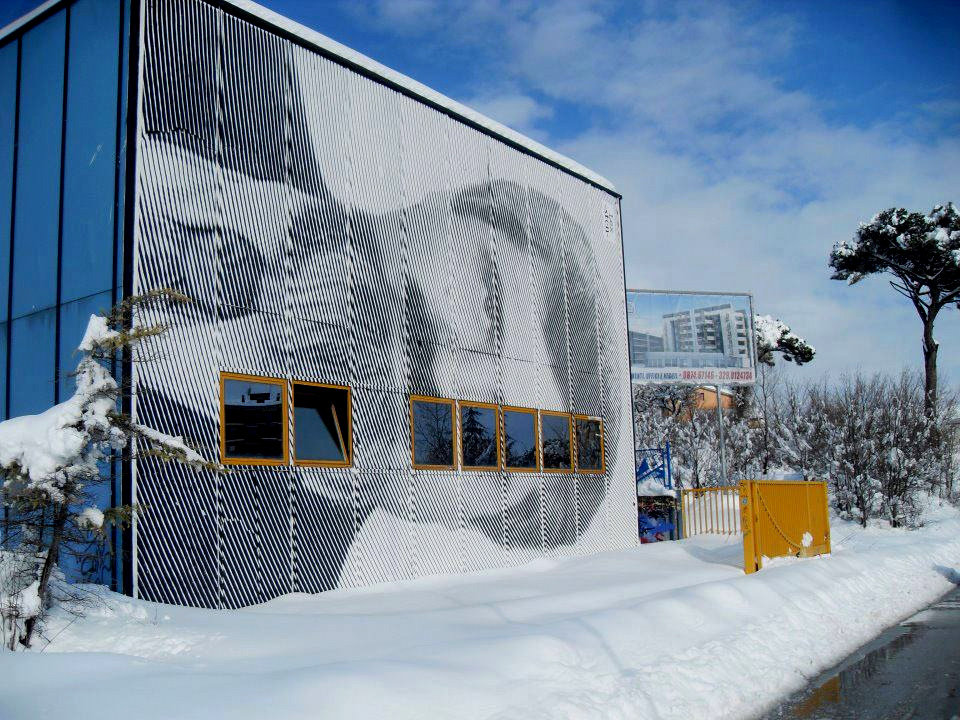 Another sensitive task was choosing what buildings to put the art on.

Murals can implicitly be “stigmatizing,” Stone pointed out. “Think about it: you never see a mural in Roland Park. You often see them in blighted neighborhoods, on problem corners.”

For that reason the Open Walls art work is going on “viable businesses,” as well as vacant structures, he said. Stone has been negotiating with these property-owners and businesses, in part to make sure they’re matched with an artist whose work they like. (“That hasn’t always been easy!” he said, with a sigh.)

Still, Stone is excited by the prospect of turning the area into a huge al fresco art gallery this spring and frank about the urgency that drives the project.

In spite of support from the city and MICA, there are still vacant buildings and rubble-filled lots in Station North, along with the galleries, artists’ studios, theater company (Single Carrot Theatre) and upscale pizza and microbrew establishments.

Among the problem vacants are several city-owned structures, including the corner building where Gaia painted his pigeon and the adjacent Parkway Theatre, a deteriorating gem of a movie house where redevelopment plans have been stalled for years.

Other buildings, like 10 E. North Avenue and the North Avenue Market, are in line for  renovation, but it’s happening very slowly.

Meanwhile, neighboring residential communities are fighting their own battle with boarded-up structures, part of the city-wide war against disinvestment and blight.

So, is Open Walls a Baltimore application of James Q. Wilson’s controversial “broken windows” theory, the idea that crime can be reduced and communities made healthier by keeping up appearances (repairing broken windows, for instance)?

Stone’s not going there. “It’s not like we’re pretending everything is going to be fine after this,” he said, “but we think it can have a really meaningful  impact.”

One major component of the project, he said, is the process of making the murals, which are planned not just for places like North Avenue and Charles Street but for non-artsy, residential areas like Brentwood Avenue and Chase, East Oliver and Latrobe streets.

“We’ll have artists working on these things for 10 days straight – they’ll be in the neighborhood,” Stone said.

“It’s been hard for us to reach out to communities only two blocks away, but this will help.”

They plan lectures, barbecues to celebrate completed murals and a newsletter to keep area residents informed. These events, Gaia said, might bring together two other groups that have traditionally regarded each other across a gulf – starving artists and property-owners and developers.

“The artist community is extremely afraid of gentrification,” Gaia said. “They’re scared to death the owners are going to sell the Copy Cat Building.”

Maybe Open Walls, he said, can be a good opportunity for all the parties with a stake in the area’s future to meet and plan it together.