The Sparrows Point steel mill was five days away from a forced tax sale, due to nonpayment of property taxes, when its owner filed for Chapter 11 bankruptcy.

By placing the property under the protection of the U.S. Bankruptcy Court in Delaware last Thursday, RG Steel stopped the sale of the 3,144-acre property scheduled for Monday, June 4, Baltimore County officials confirmed to The Brew today.

“The property would have gone to tax sale, but the bankruptcy filing has now put these debts in the hands of the bankruptcy court,” said Fronda J. Cohen, a spokesman for the county.

RG Steel owes Baltimore County $4,526,001.07, according to tax officials. Included in the bill is $1.8 million in interest and penalties.

RG Steel purchased the property on March 31, 2011 from Severstal. County records show that the mill’s 2011 property taxes were paid in full, ending on June 30, 2011, by Severstal.

After July 1, 2011, the new owner stopped paying all but nominal taxes. The Sparrows Point accounts were formally in arrears last October, and a final notice of delinquency was mailed to RG Steel on March 1.

((UPDATE: State assessment officials confirmed that RG Steel has appealed the Baltimore County assessment of the mill property. However, appealing an assessment does not absolve a property owner from failure to pay currently owed taxes, officials said.))

The underpayment of property taxes follows a pattern in which the struggling steel company failed to pay a wide spectrum of suppliers, shippers, vendors and other government authorities.

The company is also $3.9 million in arrears to the Ohio Department of Taxation. (RG Steel owns facilities in Warren, Steubenville, Yorkville and other eastern Ohio towns.)

Property with a Harbor View

Four parcels, representing the Sparrows Point mill, had been offered for sale by Baltimore County at its June 4 tax-delinquency sale. They included a 2,443-acre parcel constituting the main steelmaking facilities, including the “L” blast furnace, which are assessed at $226 million.

In addition, 701 acres of land on the north side of the peninsula was on the tax-sale list. This property had an assessed value of $12 million.

Under the law, a party can buy tax-delinquent property by paying off the taxes due. This means that – theoretically – the entire Sparrows Point complex could have been purchased for $4.5 million on Monday if the company hadn’t filed for bankruptcy protection.

In practice, however, the likely scenario would be that the company, or its bankers, would step in and pay the taxes to protect their assets.

While his name does not appear in tax or bankruptcy court records, Ira Rennert is the majority owner of RG Steel. 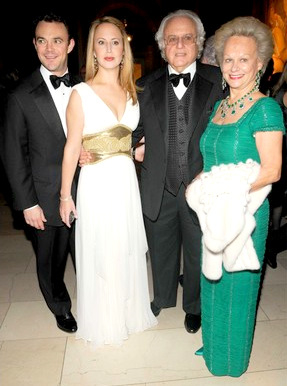 Ira Rennert, with his daughter Nina, his wife Inge and Nina's husband, Mitchell Davidson, at a 2009 charity banquet. (Clint Spaulding)

The 78-year-old financier has a net worth of $5.4 billion, according to the latest Forbes list of the world’s billionaires.

The company describes itself as the nation’s fourth largest flat-rolled steel producer, but it never remotely reached that production goal and has lost more than $200 million in the last year, well-informed sources tell The Brew.

Rennert owns the company through his family-owned holding company, The Renco Group.

According to spokesperson Cohen, Baltimore County’s lawyers are preparing to file a tax claim in the Delaware bankruptcy court, which will ultimately decide whether the debt will be paid in full or part or not at all.

As a general rule, property taxes are among the more secured debts in a bankruptcy proceeding.

Baltimore City may not be so fortunate. In an arrangement that dates back to the 1940s, the city supplies the mill with up to 50 million gallons of treated wastewater from its Back River Sewage Treatment Plant.

The wastewater (known as industrial process water) is used to cool furnace equipment and to gather up sludge and other chemical byproducts from steelmaking.

Some of the water leaving the mill is treated and discharged into Baltimore Harbor, while the heavier sludge, coming chiefly from the furnaces, is trucked to a company-owned landfill overlooking Bear Creek and buried.

RG Steel is required to pay $950,000 a year to Baltimore for use of the wastewater, but those payments are in arrears, Harry E. Black, director of finance, confirmed to The Brew.

Black said his office is reviewing records to determine how much RG Steel owes the city. (The steel company reports a debt of $1,992,345.06 in its bankruptcy filing.)

Somewhat offsetting this debt is an IOU from the city to RG Steel. Every year, the city purchases pickle liquor from the mill to use for water treatment at the Back River plant.

Because of a “procedural error” in updating the name of RG Steel from prior owner Severstal, the city’s computer rejected invoices from the steel company. This resulted in $88,994.25 in payments owed to RG Steel, according to Rudolph Chow, chief of the city’s water bureau.

On May 16, the Baltimore Board of Estimates authorized payment of this arrearage, plus an additional $230,000 to continue pickle liquor purchases through March 2014.

No payments, however, was made to RG Steel prior to its bankruptcy filing, Chow said.

If such payments had been made, they would be under the control of the court and would have been difficult to retrieve.

City Solicitor George Nilson said yesterday that he was planning to hire a private attorney to represent Baltimore’s interests in the bankruptcy.

In order to receive some repayment of the $2 million owed by RG Steel, the city needs to make the case that its claim is more than unsecured trade debt, which rarely gets paid in full.

Last Friday, Bankruptcy Court Judge Kevin J. Carey gave RG Steel two months to find a buyer for the Sparrows Point mill. He approved $50 million of debtor-in-possession (DIP) financing to permit to the company to stay afloat over this period.

RG Steel indicated to the court that it will fulfill existing customer orders at the Baltimore County mill and lay off a majority of the workforce during the next several weeks.

The “L” blast furnace has been idled, sources tell The Brew, and another key production facility at Sparrows Point, the 68-inch hot strip mill, has been shut.