The new $1.1 billion Johns Hopkins Hospital building is just around the corner from the first one, but it’s advanced medical facilities are a world away from the original 125-year-old edifice affectionately known as “The Dome.”

The assertive, hard-edge Neo-Modernist building is also on another planet, stylistically, from the fussy old red brick Queen Anne-style Main Building, built to house the relatively primitive medical technology of an earlier century.

Architecturally, the new building accomplishes what it set out to do: incorporate patient rooms, offices, and specialized facilities like cardiovascular imaging that were unimaginable a century ago; distinguish its children from its adult sections; create a new entrance – the third – for the hospital; and not incidentally create a showcase for art as well as medical science.

The new building had to meet a high standard. When the hospital first opened in 1889, Harpers Weekly called it the “largest in this country and the finest in the world.” 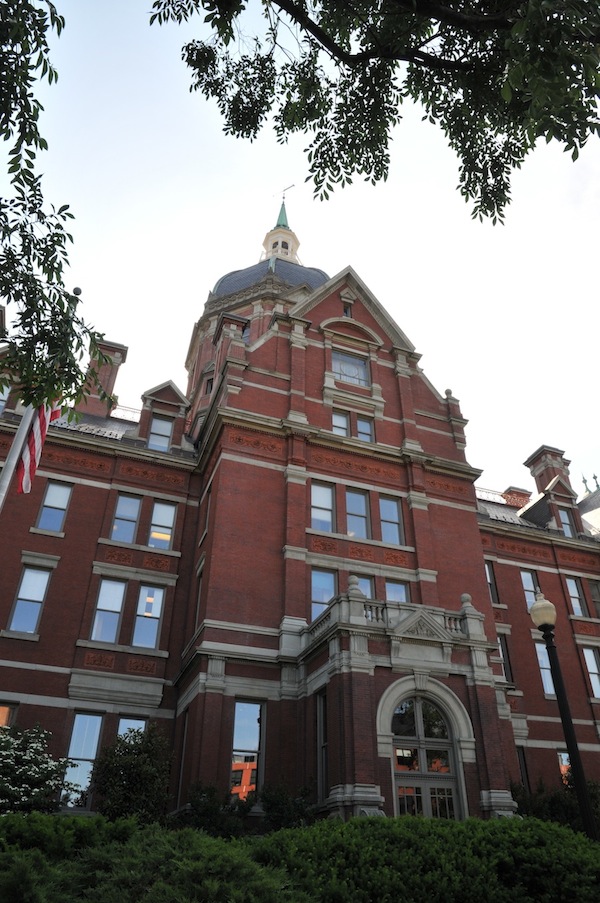 Johns Hopkins, a grocery clerk who became one of Baltimore’s wealthiest merchants, wanted the hospital that bears his name to be part of the university’s medical school, that is, a teaching hospital, a radical departure for the time.

The man behind this idea, John S. Billings, an Army surgeon who did the initial planning, also wanted separate patient wards for sanitary reasons.

Billings believed in the therapeutic effects of proper ventilation, heating, and lighting.

In this he proved to be prophetic, as well as in his grand statement that the hospital’s good works “shall not be confined to the City of Baltimore or the State of Maryland, but shall be for the benefit of the sick and afflicted of all countries and of all future time.”

The Bloomberg Children’s Center, with the curved facade on Orleans Street, and the Zayed Tower for Adults, set back behind a drop-off plaza and landscaped garden, both rise to 12 stories from an eight-story base and feature cantilevered sections. 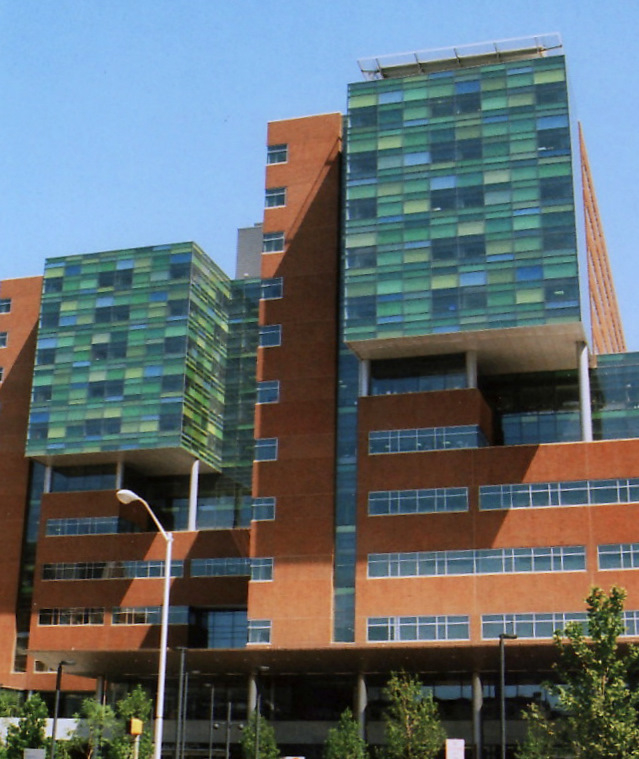 The building is connected to the rest of the hospital campus in the rear, and also, via elevated and enclosed pedestrian walkways, to the parking garage across the street.

The setting is enhanced by a very pleasant terraced garden, designed by Olin landscape architects. The materials are traditional brick, with imitation stone trim, steel and glass.

The glass is unusual, and here is where the artists come in. The program called for separating the children and adult wings.

“Originally we wanted to use the colors to differentiate the two sections,” said Jerry Johnson, design principal in the Chicago office of Perkins-Will, the architects. At first, they tried using laminate films to give the glass color. 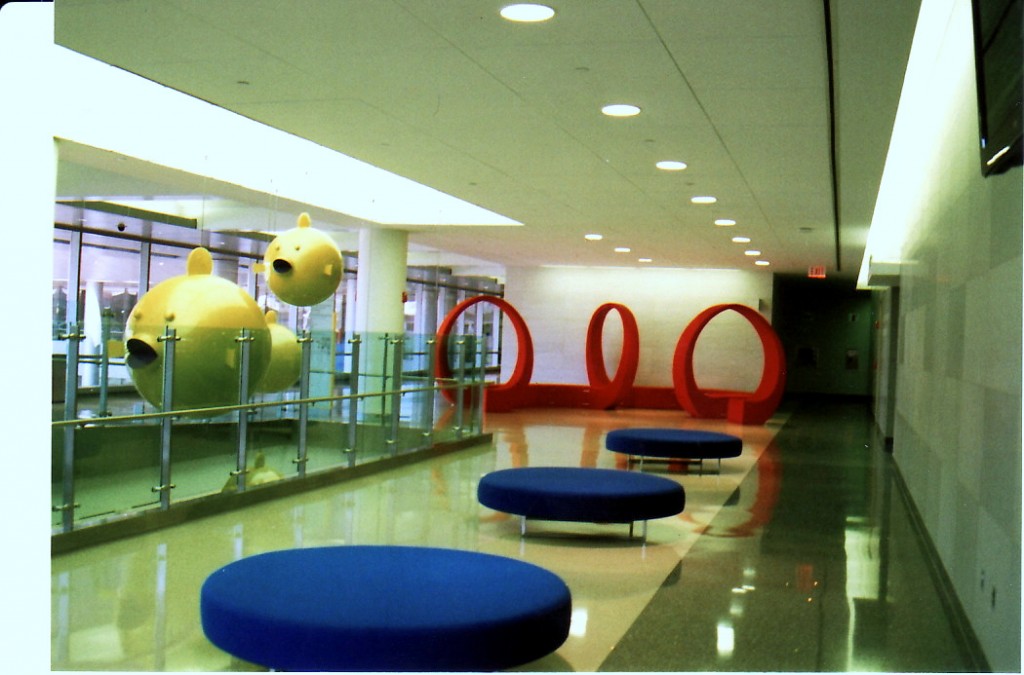 New York mayor and JHU graduate Michael Bloomberg, who provided $120 million of the cost of the children’s wing, wanted to incorporate art in the public spaces.

His team brought in Spencer Finch, a specialist in glass art.

Finch put the color on metal panels set several inches behind the glass, creating a shadow box effect. (A shadow box is a glass front case containing an arrangement of objects; artist Joseph Cornell was its greatest exponent.)

The real reason for the metal panels was that hospital planners wanted to alter the traditional patient room interior by locating the bathrooms on the outer walls.

Finch employed 26 colors, inspired by the ones Monet used to paint his famous garden, but the visual impression from Orleans Street is more Mondrian. Blue is the primary color in the children’s wing; green in the adult section.

Finch gave the glass a frit pattern in the form of a curved brushstroke that creates a shadow on the metal panel behind it and produces a watery ripple effect. It also blends the colors together and reduces solar glare. (The frit is fired into the surface of the glass with ceramic material.)

From the inside, in the right light, it produces a snow globe effect. The glass curtain wall itself became a work of art.

The new building contains several hundred works by some 70 artists. 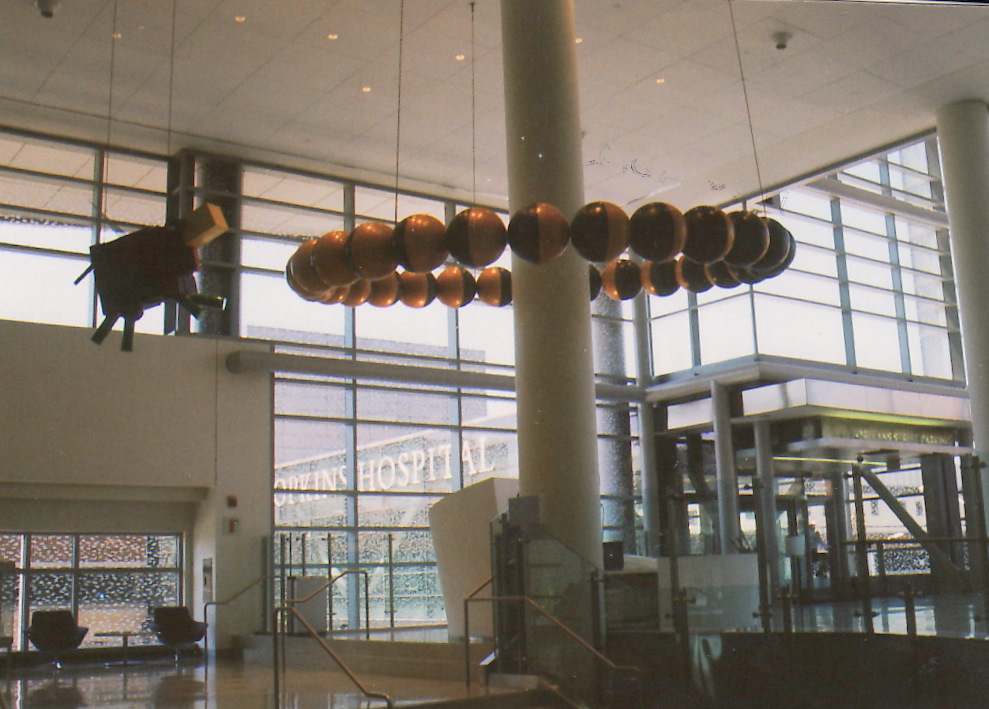 The cow jumps over (28 phases of) the moon, one of the art pieces in the hospital. (James D. Dilts)

Prominent among them are the giant whimsical fiberglass sculptures in the children’s wing by UCLA professor and theater designer Robert Israel, including a yellow school of puffer fish and a cow jumping over 28 phases of the moon.

Perkins-Will also designs airport terminals, so the new hospital entrance with the expansive drop-off plaza, the parking garage and connecting walkways may seem familiar to visitors. So may the large-scale bathrooms.

The new entrance on Orleans Street is more visible and accommodating than the former one located off Wolfe Street behind the building with the familiar dome, designed by Billings. The original main entrance featuring Thorvaldsen’s statue of Christ the Consoler in the rotunda is now mostly ceremonial. 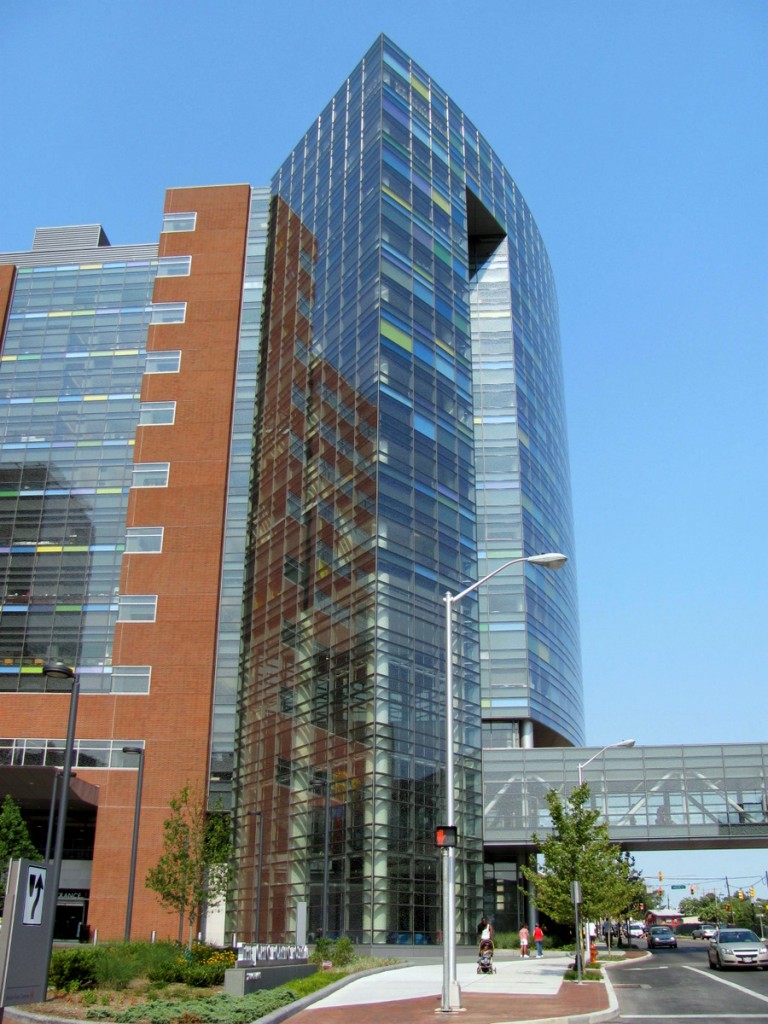 The Children’s Center tower is translucent in the mid-day sun. (Mark Reutter)

The visitor to the new building enters a voluminous, two-story, light-filled lobby incorporating a white curvilinear reception desk and elevators and stairways to the second floor public spaces.

The north-south slope of the Johns Hopkins Hospital’s 14-acre site enabled this arrangement. Adult and pediatric emergency departments are located below grade in the rear accessed by a new ambulance entrance off Wolfe Street.

Balducci’s coffee and sandwich bar, and a pleasant outdoor patio that connects with the rear of the Phipps Building, occurs at the bend in the L-shaped main corridor that leads to the children’s and adult wing reception lobbies.

Assembling a structure of this complexity requires a tremendous effort. A consultant to Perkins-Will wrote the program for the hospital and fully a third of the firm’s 1,200 employees and four of its offices – those in Chicago, New York, Los Angeles, and Washington, D.C. – worked on it over an eight-year period, to say nothing of dozens of Hopkins personnel and hundreds of suppliers, contractors and workmen.

That they have succeeded in their ambition is the real triumph of the building.

Yes, there are minor glitches. Some of the conference rooms reportedly lack electrical outlets, for example. But that is to be expected in a project of this size. Most of its new occupants seem happy with the result. “There is no other building like this,” said Jerry Johnson, not immodestly. 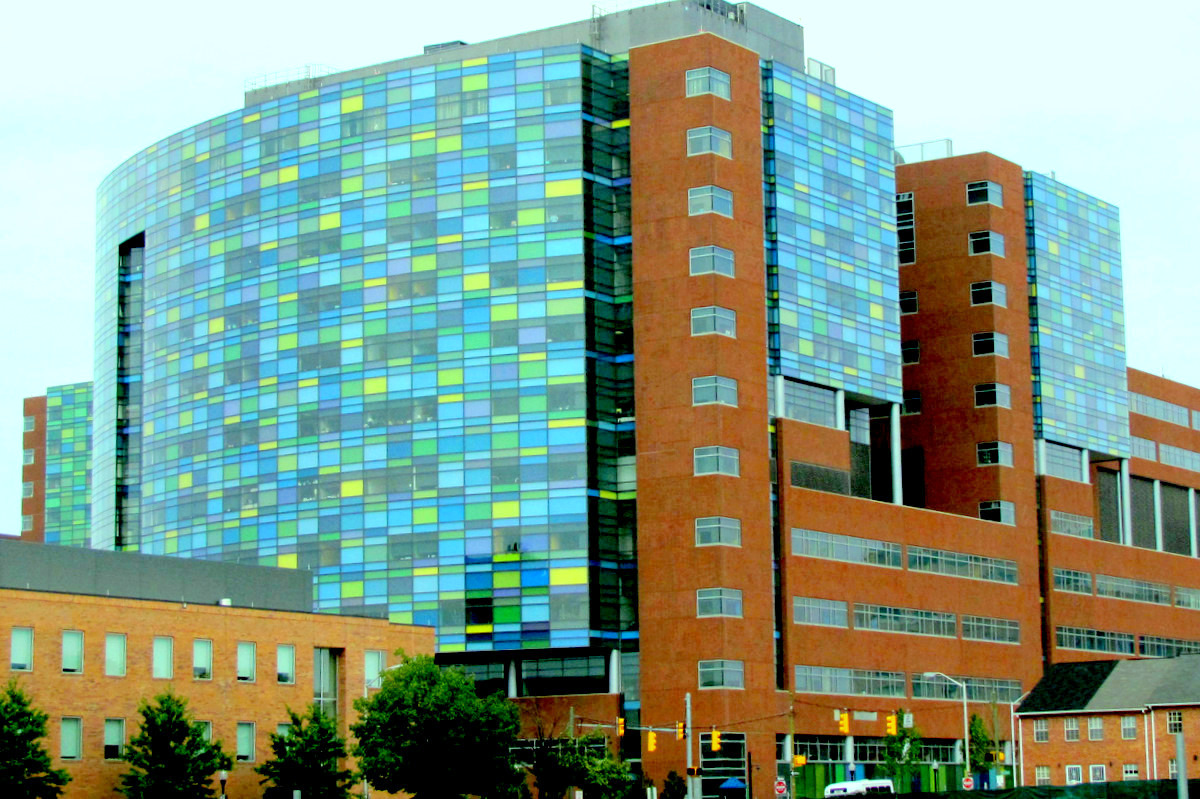 As evening approaches, the glass turns into deeper shades of blue and yellow. This view is from Fayette Street near Washington Street. (Mark Reutter)

John Billings also would be pleased to see his theories borne out, including “using the hospital as an instrument of medical education.” A main reason for the private patient rooms is to cut down on hospital-borne infections.

“Hospitalitis,” or sickness induced by the hospital itself, was also a concern in Billings’ day, which is why he wanted separate ward buildings to interrupt the transmission of germs with fresh air and daylight.

Billings might likewise certainly applaud the creative use of light and color in the new building, and the extensive artworks designed to brighten the mood of its patients, as the institution he had planned at the dawn of the age of electricity enters a new age.
______________________
James D. Dilts is co-author of A Guide to Baltimore Architecture (Tidewater Publishers). He is also president of Friends of the Peale, a non-profit group seeking to reopen the Peale Museum as a center for Baltimore architecture and history.