The revised plan calls for adding 1,000 residential units and a new hotel at the 27-acre site located west of Caroline Street between Fells Point and Harbor East.

The residential properties would join such large office complexes as the 350-foot-high Exelon Tower, scheduled for completion at the end of 2014.

Under the present plan, the developer could face a revenue “shortfall” of up to $10 million a year during the early phases of the project, which could take 10 or more years to complete.

So far, Paterakis has not applied for PILOTs (Payment in Lieu of Taxes) that subsidized the Legg Mason Tower, Baltimore Marriott Waterfront and other properties he developed at Harbor East north of this project.

The billionaire owner of the largest private bakery in the U.S. is also motivated by a desire to increase the number of residents living at Harbor Point to provide a “24-hour living environment,” according to Greenberg.

The new plans were outlined before the Urban Design and Architecture Review Panel (UDARP), the first step of a process that will require final approval by the City Council.

Local residents only heard about the plan a week ago when the developer “rather casually” presented an update of the project to the Fells Point Task Force, according to Carolyn Boitnott, coordinator of the Waterfront Coalition.

Boitnott said the increased density threatens to “swallow up Fells Point,” noting that the residential building proposed to front Caroline Street will be 12 stories high, three times higher than the current buildings across the street. 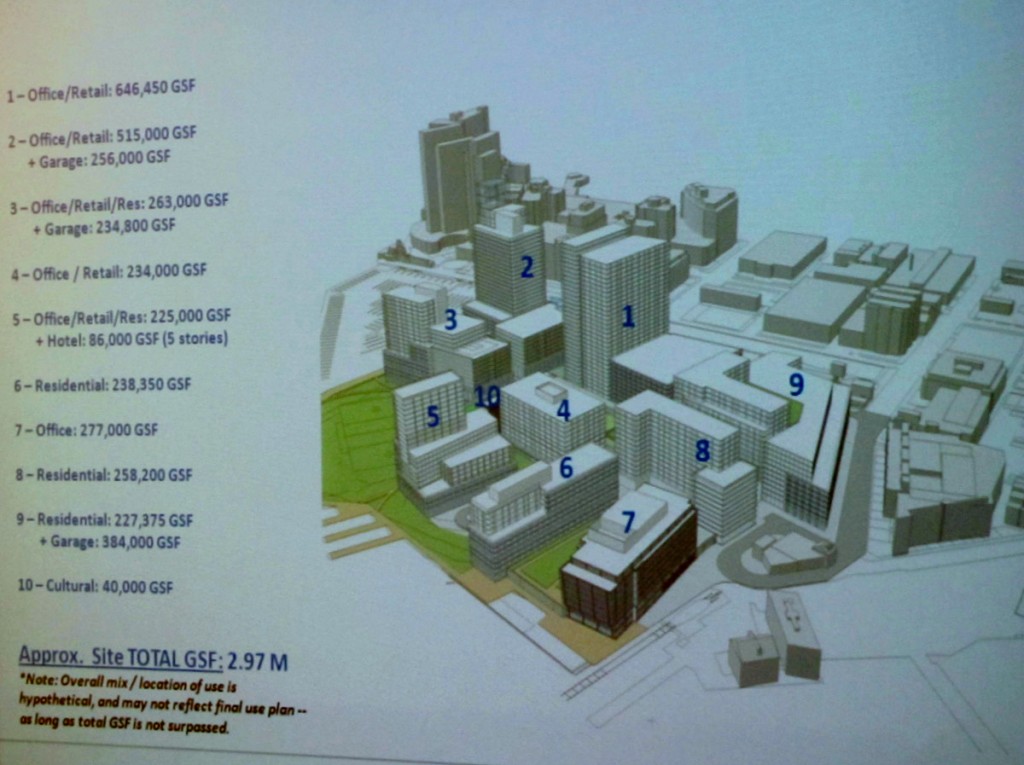 The Paterakis group wants to build residential structures along Caroline Street and near the waterfront, chiefly in buildings 5, 6, 8 and 9 in this architect’s sketch. (Harbor East Development Group)

Several members of UDARP expressed concern today about the “massing” of the proposed buildings, especially the high-rise Exelon building, but expressed overall approval the project.

The design panel called on the developer and its architect to address a number of specific design elements and return to the panel with revisions.

In addition to added density, Greenberg said that the developer wants to reduce the project’s TIF allocation from $154 million to around $100 million (the exact figure has not yet been determined, he said).

A lower TIF should reduce the interest rate on the bonds that the Paterakis group would pay in lieu of property taxes and lower the overall cost of borrowing. Greenberg likened the change to a homeowner who reduces the size of his mortgage so as not to be burdened with excessive interest costs.

Under a TIF, Baltimore city issues bonds on behalf of a private project, and the developer pays off the bonds with revenues that would otherwise be paid in property taxes to the city.

A TIF carries the risk that if a new development does not generate enough property taxes to pay the bond costs, the developer is on the hook for the difference.

Greenberg said the Paterakis group is willing to pay for more infrastructure at Harbor Point rather than face higher TIF financing.

The 27-acre site is capped by a concrete seal to contain hazardous waste buried beneath. The waste was generated over many decades of manufacturing chromium products by an Allied Chemical factory.

While Harbor Point is expected to host two towers rising up to 350 feet, it will also contain 9.3 acres of open space, a central park roughly the size of one of the wings of the Mount Vernon Place Square and a waterfront promenade.

The project’s architect, Ayers Saint Gross, floated the idea of wetlands bordering parts of the public promenade to add diversity to the design and improve the quality of surface water draining into the Inner Harbor.

Tom Stosur, director of the planning department, called on the developer to consider the whole site as an “eco-district” and complete the open spaces as rapidly as possible, so that the public could enjoy the harbor.

Boitnott, of the Waterfront Coalition, said the 27-acre plot was originally planned as a waterfront park until it was determined that Allied Chemical waste could be capped and built over safely.