Tuesday’s appearance on the Marc Steiner show by several City Council members offered some insight into the Rawlings-Blake administration’s talking points as it pushes back against audit reform and the legislation is gradually whittled down.

Two councilmen who voted to substantially weaken the bill Monday night sought to alternately portray the situation as either not so bad or quite terrible – and the fault of the city comptroller.

“There’s a couple of things that are important to note and important to reiterate. This city already does an annual audit,” said Councilman William H. Cole IV, a close ally of Mayor Stephanie Rawlings-Blake. “It is untrue to continue to say publicly the city isn’t auditing its funds.”

What he was referring to was the city’s annual Comprehensive Annual Financial Report (or CAFR). Readers can see an example of one HERE and note that it is a general review of the city’s finances, dependent on city finance officials to supply accurate totals for broad categories of city government functions. 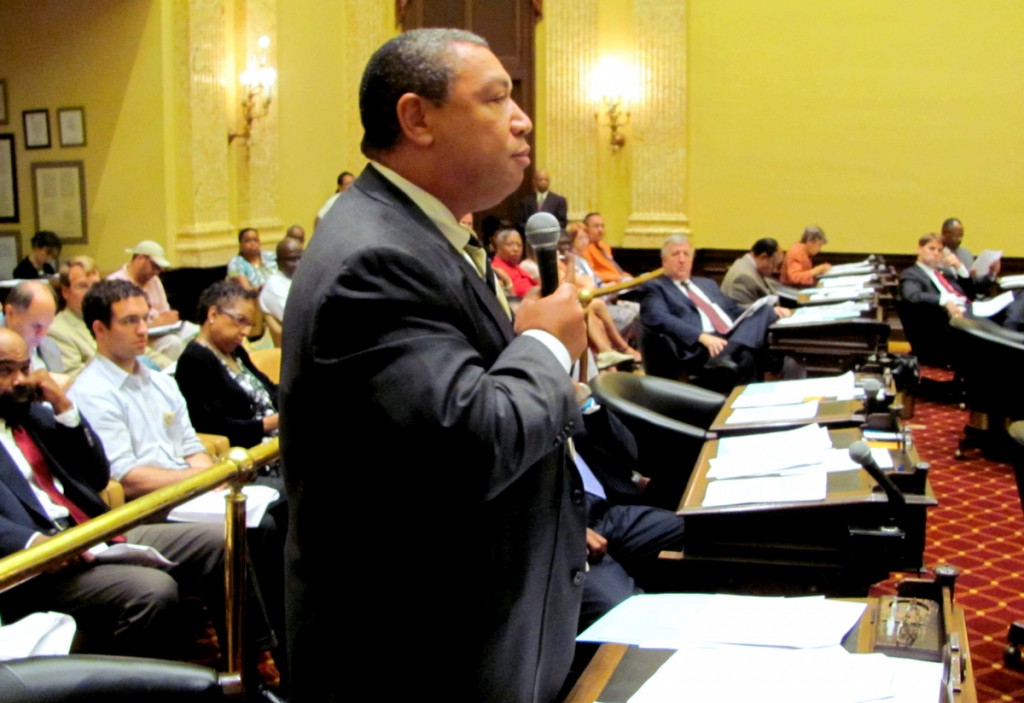 Councilman Bill Henry speaks against the amendments that weakened the audits bill at Monday’s meeting. Council members Mary Pat Clarke and Bill Cole sit at the opposite end of the chambers. (Photo by Mark Reutter)

In the introduction to the 2009 Baltimore CAFR linked to above, auditors Ernst & Young note that the document is part of “a broader federally mandated ‘Single Audit’ designed to meet the special needs of federal grantor agencies.”

It is not the kind of agency-specific financial audit conducted frequently and routinely in other cities and sought by many citizens in Baltimore now as a way to root out possible waste or mismanagement and review agency books on a schedule comparable to those of such cities as Philadelphia or Dallas.

Also appearing on the WEAA 88.9FM radio show was Councilwoman Mary Pat Clarke, who called Cole on this point.

“Bill, before we go forward, the finance director and you both affirmed yesterday [that] yes [this is an audit] of the city as a whole, not of individual agencies,” Clarke said.

Cole acknowledged that she was right by saying, “Correct. There are presently no agency-level audits being done except for those that are revenue-producing like the Parking Authority and the Baltimore Development Corporation.”

And yet he returned to the “we-do-annual-audits” argument several more times.

Switching gears, Cole then complained about the lack of audits and blasted Comptroller Joan M. Pratt’s office for not conducting them. (Pratt and Mayor Rawlings-Blake have not been getting along recently, with the former accusing the later of engaging in “fraud, waste and abuse” over a disputed VOIP phone system.)

“We have a comptroller’s office with a department of audits,” Cole said. “Brandon Scott stood up on the floor last night and. . .  said it accurately: ‘Why is it that these agencies haven’t been audited in his lifetime?’ And that’s what I’d like to know.”

So why did Cole oppose several versions of the audits bill up until the greatly-scaled back version approved by a preliminary Council vote on Monday? (It now specifies a charter amendment that would mean audits every four years for 13 city agencies, with the process not starting until 2014.)

“We’ve never seen a fiscal note for it, we’ve never been able to put a dollar figure on it,” he explained.

“If we hadn’t held up this bill so long in trying to come up with compromises to get it passed,” Clarke put in dryly, “maybe we would have had time – during the budget process, even – to figure out what it would cost.”

(Actually, city budget chief Andrew Kleine wrote in May that the annual cost of conducting financial audits under the legislation could be $1 million or more.)

Clarke questioned what Pratt’s audit department does with its 33 auditors, and Steiner noted that San Diego has 15 full-time auditors and a $2.7 million audit budget (much smaller than Baltimore’s) and yet in 2011 identified $37.8 million for the the city in potential recoveries.

Cole chided Clarke (“Councilwoman, they’ve said that they don’t have enough resources to do it right now.”), but added, “We need to get the Comptroller in here.”

Another confusing part of the radio show conversation was the discussion of performance audits, which are a broader examination of government agencies’ ability to meet policy goals rather than financial audits, a hard-nosed accounting of specific expenditures.

In Monday’s wrangling over the legislation, the Mayor’s council allies had fought for a bill that would specify only performance audits. (Clarke succeeded in blocking them, and retaining financial audits.)

Councilman Nick Mosby, who voted Monday in favor of the amendments to weaken the audits bill, insisted that he was “all for audits.”

When asked by Steiner why then he had voted against requiring them of all agencies every two years, Mosby’s reply seemed to be that requiring audits annually would be hard and unusual (“It would make Baltimore unlike any other city in the world!”) and that performance audits would be especially hard (“Do you know how hard that is? Performance audits, Marc?!”).

Councilman Bill Henry, who tried on Monday to table the amendments sought by the mayor’s office, touched on a central question behind the debate.

Do citizens and top city leaders know how public money is being spent?

“My suspicion would be that in departments they have records of what they’re doing  that are not mirrored in the Finance Department,” Henry said, “and that what’s on the city’s books is not a 100 per cent picture of what financial activity each agency is doing.”

Later in the conversation Cole returned to that point and disputed it, saying firmly “Baltimore City has one set of books.”