Today the city agreed to pay the B&O Railroad Museum, a private group, twice the annual cost of running the Edgar Allan Poe House, a public facility, in hopes of turning the latter into a moneymaking tourist hot spot.

The word “privatization” was never uttered as the Board of Estimates approved a consulting contract with the B&O Museum to help transfer the Poe House from city management to a non-profit with no capital funds that is nonetheless expected to generate enough cash to become self-sufficient.

The big benefactor of the changeover will not be the 501(c)(3) non-profit the city has incorporated to manage the Poe House, but the B&O Museum.

The museum will receive $180,000 for a year’s worth of advising “Poe Baltimore” about a new website and other issues of branding and administration – or double the $85,000 in annual operating costs that the city said it could no longer afford to keep the Poe House open.

On the other hand, Poe Baltimore is expected to raise $382,500 by 2013 through a mix of new events and programming plus grants, sponsorships, individual membership fees and partnerships.

According to Rawlings-Blake, Poe Baltimore “will assume full responsibility for operating and funding the Poe House” without any capital start-up funds from the city.

While the mechanics differ, the business model here is the same as has been instituted, over vigorous protests by many citizens and several elected officials, for city rec centers. 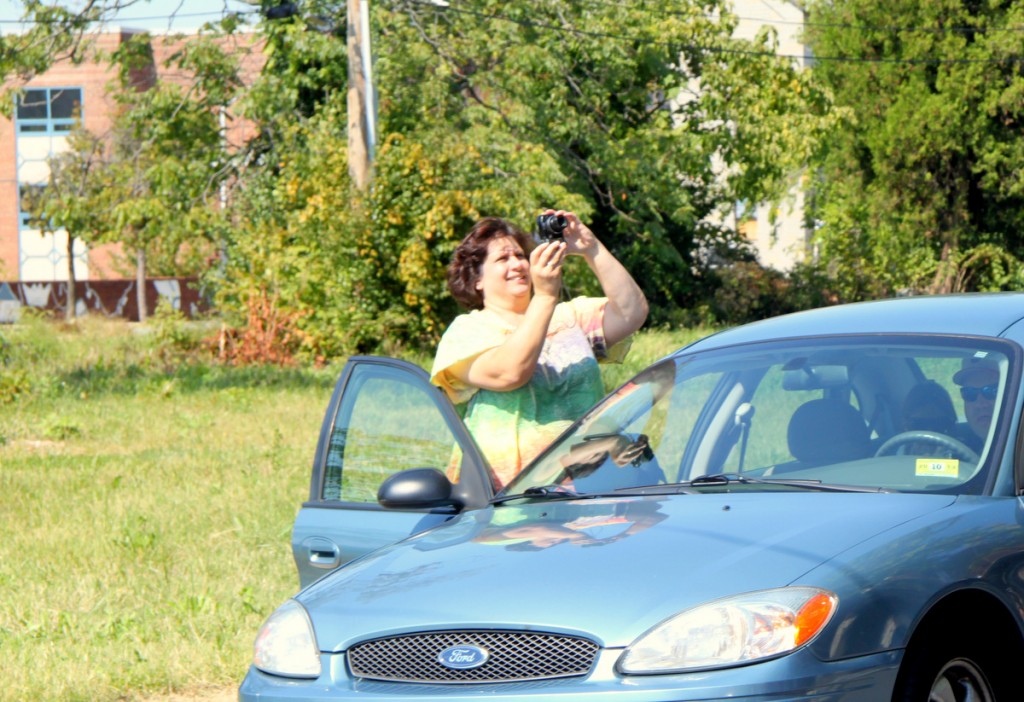 We encountered this New Jersey woman taking a picture of the Poe House last week: “My daughter is a huge Poe fan!” Let’s hope she returns. (Photo by Fern Shen)

In both cases, the city is contracting out municipal functions to private groups expected to generate revenues, independent of city funding, through admission charges, sponsorships, individual giving and grant aid.

It’s too early to tell whether the half-dozen rec centers, still undergoing the first stages of privatization, will emerge as more efficient operations – with better programming for kids – than the old “civic model” administered by the Department of Recreation and Parks.

But what’s clear is that Rawlings-Blake is gung-ho on privatization in the face of rising municipal costs and flat revenues – and is seeking to expand the model to other facets of city government.

Earlier this year, the mayor denied that the city was considering selling or leasing 15 historic Baltimore landmarks, including the Shot Tower, Peale Museum and Cylburn House.

Her remarks came after the Board of Estimates had commissioned an Annapolis appraiser to evaluate the landmarks with an eye toward “marketing opportunities.”

Last week, Jeff Jerome, longtime curator of the Poe House, lost his job (officially, he retired), and the museum was closed to the public as part of the transition to the new management.

The city will be following recommendations of the Cultural Resources Management Group (CRMG), hired last year to devise an operating, business and financial plan for the Poe House.

The $45,000 report from CRMG calls on the B&O Museum to develop a fundraising plan and membership database, provide administrative oversight, and prepare a “visit-friendly website,” two videos, interpretive scripts and “basic branding” for the Poe House

For the next six months, the Poe House will be closed.

Then the museum is scheduled to reopen, with new exhibit installations including flat-screen TV monitors, to engage “the imagination and involvement of a wider audience and becoming an active contributor to the surrounding community,” according to today’s Board of Estimates agenda.

Traveling in His Mind

In its report to the city, CRMG says the B&O Museum, six blocks south of the Poe House in West Baltimore, is a natural fit to create an operational plan for Poe Baltimore because of its location and “shared history.”

The report repeatedly makes a point that “Poe rode the train on his travels to and through Baltimore.”

If this were the case, Poe’s travels were very short. During the time he lived at the Poe House, railways were in their infancy, and the B&O’s route amounted to just 13 miles, between Baltimore and present-day Ellicott City.

Mixing the nuts and bolts of a railroad museum with the macabre imagination of Poe might be a tougher task than the city’s consultants realize.