In Washington, party affiliation and competing ideologies can afford a reliable cover for politicians struggling to elbow each other out of the way and claim the public limelight.

Forty miles to the north, in a city where every elected official is born and bred into the same party and the humdrum of meat-and-potato constituent service trumps lofty principles – public recognition is limited and relations among bigwigs can get testy.

Such was the case today when Baltimore’s two highest elected officials fought over who should take credit for, of all things, government transparency.

It all started when the mayor’s press office issued a release with the headline, “Mayor Rawlings-Blake Announces Expanded Broadcast of Public Meetings.”

In the release, Rawlings-Blake assumed credit for the live broadcasts, starting today, of the meetings of the Board of Estimates (plus Municipal Zoning and Appeals Board and Board of Liquor License Commissioners) on cable TV25.

“I’m pleased,” the mayor was quoted as saying, “that we are able to increase access to government meetings.”

This release, courtesy of City Council President Bernard C. “Jack” Young, charged that the mayor had no right to take credit for the broadcasts because she had tried to block them.

“The truth, in fact, is that the idea to televise these important hearings was the brainchild of Baltimore City Council President Bernard C. ‘Jack’ Young, who along with members of the Council worked for nearly two years to televise these hearings.”

As supporting evidence, the release included a 2010 Baltimore Sun article saying the mayor’s finance office objected to the Council’s plan for live broadcasts, saying the cash-strapped city couldn’t afford the $45,000 needed to support the venture.

Only after Young, the Council and “a host of good government advocates” championed the measure did the mayor reluctantly relent, the release said.

“Because of My Efforts”

Thus, during the inaugural live broadcast of a Board of Estimates meeting today, viewers of cable TV25 were beamed the sight of Young saying, “So because of my efforts, citizens will now be able to watch these proceedings via the city’s cable station and online.”

Taking the mantle of a crusader slaying a political dragon, Young continued, “For too long, citizens were kept in the dark about decisions made by these powerful boards because they were not televised or streamed online. I am thrilled that we have ushered in a new era of openness and accessibility.” 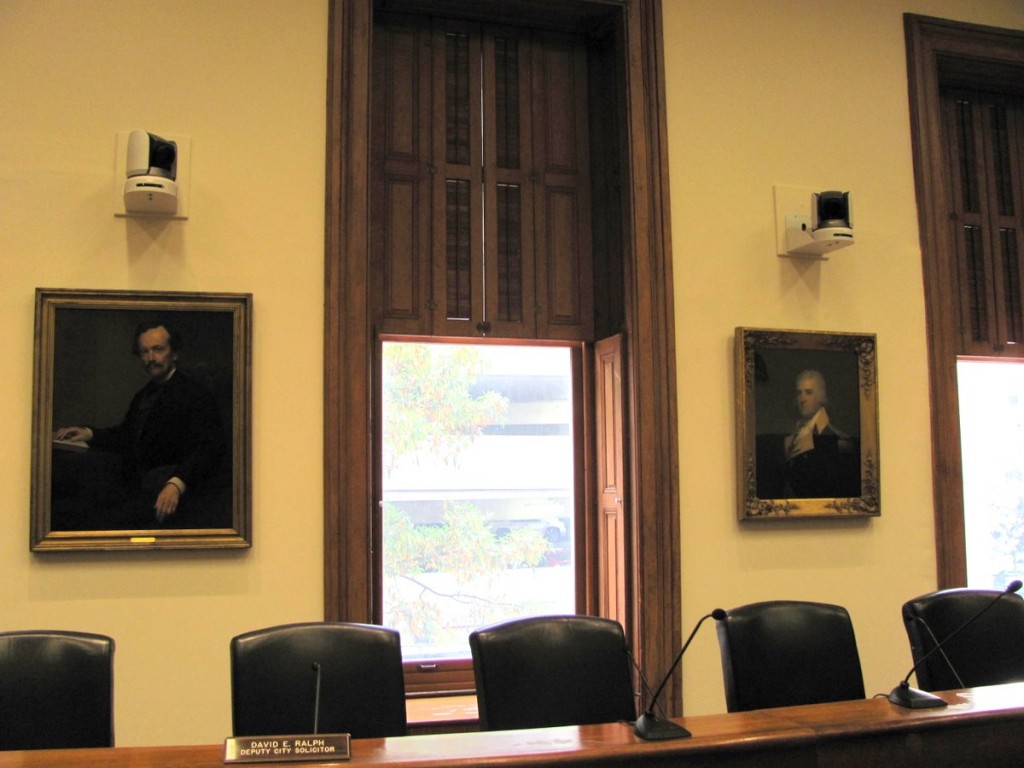 Cameras stationed in the Hyman Aaron Pressman Board Room for televised hearings of the Board of Estimates, Zoning Board and Liquor Board. (Photo by Mark Reutter)

The mayor also expressed pleasure that “by making government more open and transparent, we can help residents better understand our decision-making process and how they can become involved in the life of the city.”

This quote comes from the mayor’s aforementioned press release. After conferring with her press aide, the mayor did not recite the release verbatim during today’s meeting. Instead, she generically thanked her cable and communications team and lauded public accessibility in general.

Throughout today’s broadcast, the two politicians did not look at – or speak to – each other from their side-by-side seats. After the cameras were turned off, heading in different directions, they provided little transparency as to their public or private thoughts.