Baltimore got a glimpse yesterday not just of Mayor Stephanie Rawlings-Blake’s new development chief, a 45-year-old economic development official from Boston, but also of the cadre of real estate attorneys, downtown businessmen and civic power players who helped the mayor select her.

Brenda McKenzie was announced as president and CEO of the Baltimore Development Corporation (BDC) after closed-door interviews with a panel that included representatives of some of the city’s biggest developers who have won lucrative tax breaks from the BDC.

The agency is tasked with aiding the city’s 225 neighborhoods through such programs as Baltimore Main Streets, Westside Initiative, Facade Improvement Grant Program and Brownfields Initiative.

The mayor described McKenzie’s four years as economic development director for the Boston Redevelopment Authority in glowing terms, saying she “successfully facilitated $15 billion in private development” there. In Chicago, where McKenzie was deputy commissioner for the Department of Planning and Development, she oversaw $1.8 billion in residential and retail development, including 7,000 new housing units.

Summoned by Rawlings-Blake, several business leaders came to the microphone to laud the choice of McKenzie. Donald C. Fry, president of the Greater Baltimore Committee and a member of the interview committee, said McKenzie’s 19 years of experience gave her a unique appreciation of the importance of neighborhoods to economic development.

To Listen and Learn

In the past year, the BDC has faced mounting criticism from citizens’ groups and faith leaders for what they see as favoritism toward glitzy waterfront projects and tourism – at the expense of existing neighborhoods and longtime residents.

Winning the approval of the BDC is the first step toward starting a major development project in Baltimore, and the quasi-public agency has the power to recommend different types of tax breaks to the mayor and City Council. 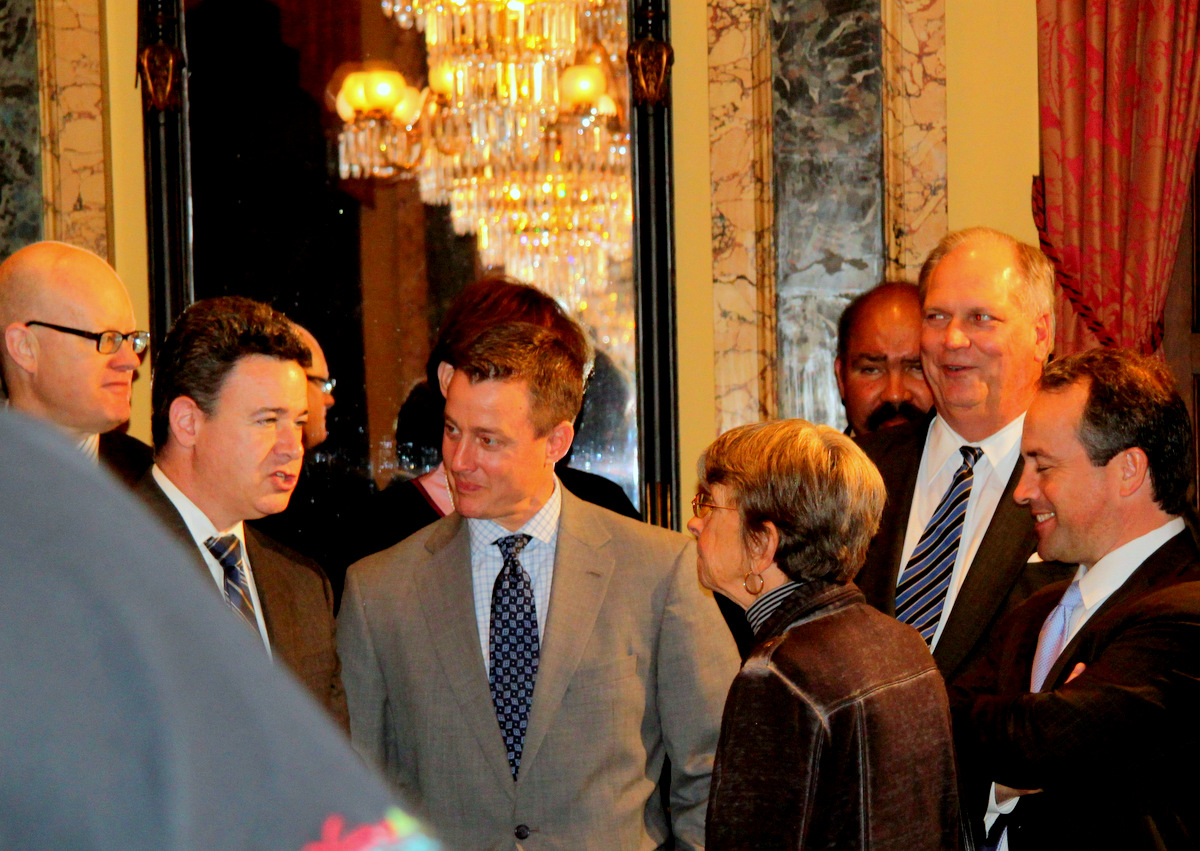 Picketers (including the Rev. Heber Brown, the group “Another BDC is Possible,” union representatives, youth advocates and others) have gathered outside the BDC offices, protesting city development policy and closed-door meetings to discuss development deals. A panel formed by City Councilman Carl Stokes, chair of the Council’s Taxation, Finance and Economic Development Committee, made a series of recommendations last year to open the agency to greater accountability.

McKenzie’s predecessor, M.J. “Jay” Brodie, whose retirement created the vacancy, was the face of the city’s economic development policy which he vehemently defended as bringing tens of millions of new revenue dollars to the city.

In her brief remarks yesterday, McKenzie gave little indication if she planned to make any substantive changes to the agency. Asked about the criticism of BDC, she said she was new to the job and wanted to listen and learn.

“My main priority at this point is to be open . . . transparent and collaborative,” she said.

The members appointed by the mayor to interview about a dozen potential candidates for the BDC job included two of Baltimore’s leading real estate lawyers – Jon M. Laria and Mark P. Keener.

Laria, managing partner of Ballard Spahr’s Baltimore office, represents the 25th Street Station Wal-Mart project in North Baltimore and Under Armour in its planned expansion of its Locust Point headquarters. He is also counsel for State Center LLC.

His partner, Mark Pollak, represents the developers of the Lexington Square “Superblock” project. The BDC board recently recommended to the City Council that the long-stalled retail-and-apartment project be awarded a PILOT tax break conservatively estimated at $22 million.

On his firm’s website, Keener says he was directly involved in negotiations with the city for the development of the Legg Mason Tower, Marriott Waterfront Hotel and Spinnaker Bay Apartments at Harbor East that received more than $8 million in property tax breaks in fiscal 2010.

Keener reports that he currently represents the Paterakis Group in its negotiations with the BDC over the disposition of Harbor Point, in particular an initiative pushed by the developer to reinstate an “EZ” (Enterprise Zone) tax credits worth tens of millions of dollars.

The other members of the panel that interviewed candidates for the BDC post – assisted by the Florida headhunting firm of Gans, Gans & Associates – were insiders in local business and political circles:

• Kaliope Parthemos, deputy chief of economic and neighborhood development, who is the closest advisor to the mayor on all development matters.

• Harry Black, director of finance for the city.

• Atwood “Woody” Collins III, president of M&T Bank’s Mid-Atlantic Division and member of both of the Baltimore Development Corp. and Greater Baltimore Committee.

• Karl Gumtow, founder and CEO of Cyberpoint, a cyber security firm, and board member of the Greater Baltimore Committee.

• Bert J. Hash Jr., president of the Municipal Employees Credit Union (MECU) and member of the BDC board.

• Arnold Williams, an accountant at Abrams, Foster, Nole & Williams and long-time chairman of the BDC. 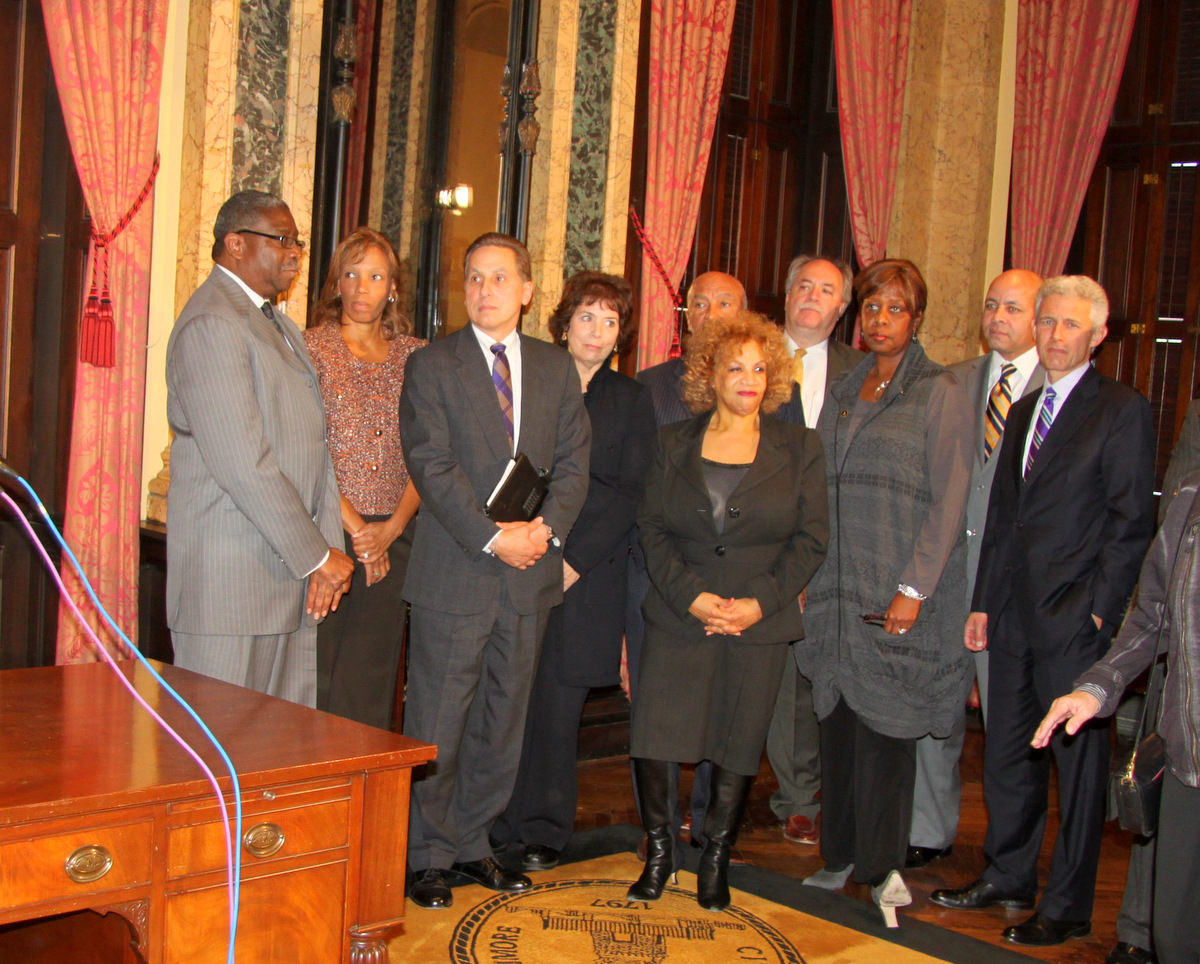 At yesterday’s press availability, McKenzie raved about Baltimore’s neighborhoods to reporters and, saying she was new to the city and still learning about it, asked, “What’s a good neighborhood” to move to when she begins her job next month.

Told by The Brew that “we could ask readers to suggest one,” she said, “I’d like that.”

After Kaliope Parthemos came over and told the media that McKenzie had other obligations and needed to leave, a reporter asked her one last question: “How old are you?”

“Oh, now I really do need to leave!” she said with a smile, refusing to give an answer. A mayoral spokesman later e-mailed the information that she is 45.