A middle-aged woman being dragged out the door of Baltimore City Hall by uniformed officers – that’s the image the public got last week of activist Kim Trueheart after she was, apparently, banned from the building and then arrested.

But another image of Trueheart originates from inside City Hall, where the 55-year-old is something of a fixture, and staffers, bureaucrats and elected officials regard her with affection, respect and more than a little wariness.

Sometimes she’s the only member of the public present at City Council work sessions and budget reviews. Before and after meetings, council members and Council President Bernard C. “Jack” Young are frequently seen chatting with her.

Most of them know that in her bag, along with snacks and a camera, are pertinent documents that she has probably read more closely than they have.

At a committee hearing last year, for example, watching a councilman flounder as he questioned an administration official, Trueheart scribbled a series of  questions, flagged an aide’s attention and sent them up to him.

The councilman then proceeded to raise each of her points. Most in the room probably had no idea where he got his second-wind.

Still, for every sotto voce nudge from Trueheart on her priority issues – neighborhoods, recreation centers, after-school programs for city youth and the mismanagement and cronyism that she believes divert funds from those causes – there are other very harsh public blasts.

Government officials are shamed for missing key votes (“Where is Pete Welch?” went one Tweet. “Need an apb”).

Reporters, for whom Trueheart is sometimes a source, have also felt her wrath. She has called out local media, including at one point The Brew, for failing to report on what she sees as institutional racism.

But her sharpest and most frequent barbs are aimed at Mayor Stephanie Rawlings-Blake.

“The reign of our dictatorial Princess of BMore Poli-Tricks continues,” she commented online in July, regarding a news story about how the administration’s allies on the Council weakened a bill intended to address the city’s chronic failure to audit major agencies. 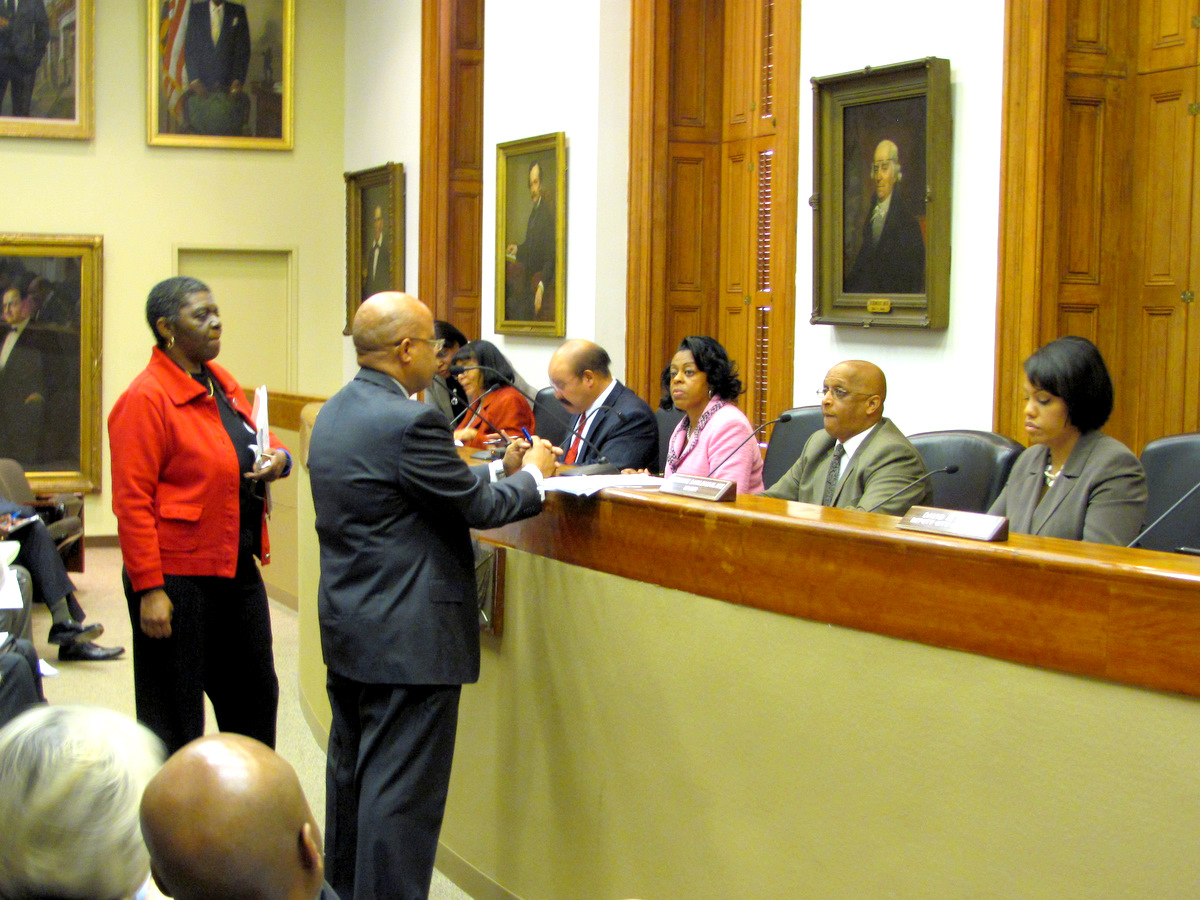 Trueheart speaks at the Board of Estimates last year. On the far right is Mayor Stephanie Rawlings-Blake.  (Photo by Mark Reutter)

“This is a foul budget,” she said in April, during the public comment period at the annual Taxpayers’ Night, looking straight at Rawlings-Blake. “You’ve offended us. You’ve offended our children.”

She regularly attends the Wednesday meetings of the Board of Estimates, where she just as regularly files protests against contracts she believes don’t serve the public.

The mayor’s staff appears determined to come up with ways to prevent Trueheart from directly addressing Rawlings-Blake at these meetings. Reporters who have traditionally approached the mayor after adjournment are now being directed to an inner office for credentialed media only.

When Trueheart tried to attend these press briefings, she was barred by the mayor’s media staff.

A Board of Estimates Fixture

Sometimes the activist shouts out her opinions from her second-row seat at the Wednesday board meetings, often drawing a stony glare from Rawlings-Blake, who controls the board through her vote and the votes of her two appointees, Public Works Director Alfred Foxx and City Solicitor George Nilson.

Whether this was the kind of behavior that Baltimore police were referring to in their arrest report (written last Wednesday after Trueheart was stopped at City Hall) is unclear.

In addition to her allegedly causing a disturbance during a mayoral press availability in the City Hall Rotunda and allegedly refusing to leave the building last Wednesday, her offenses as described in the police narrative are vague.

“Ms. Trueheart was told because of her disturbances and her being confrontational on other occasions she could not enter [City Hall],” the report reads.  The “complainant/victim” on the document is listed as “Mayor City Council.”

Whether the ban is legal and whether her arrest will stand may become clearer tomorrow morning when Trueheart’s case is scheduled to come up in District Court. She is charged with trespassing in a public building during working hours, disorderly conduct and failure to obey a law enforcement officer.

Meanwhile, the Northwest Baltimore resident is describing her arrest as “a hugely significant attack on my civil rights,” and says she’s earned her in-your-face stance because it’s backed by facts: “I do my homework.”

“I Challenge the Decision-Makers”

“When I get in the decision-makers’ faces, I’ve got some stuff for them – it’s not just me ranting,” she said in a phone interview with The Brew after she was released last week from Central Booking. “I challenge the decision-makers to make better decisions.”

Few likely know the personal story behind her passionate advocacy.

The Western High School graduate was born and raised in Baltimore, growing up in the Allendale section of Edmondson Village. Her father’s side of the family came from Charlottesville, Va., she said, and her mother’s family is from Alabama.

She joined the U.S. Navy after high school, serving four years of active duty as an intelligence specialist. In the Naval Reserves, she became the senior enlisted advisor to the first African-American admiral in the Reserves’ intelligence program. 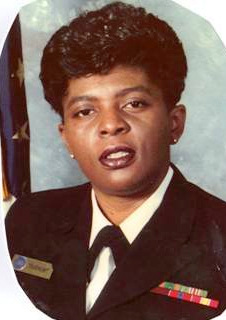 After working in private industry for a few years, she moved on to work as a civilian in security for the Department of the Navy.

As a Department of Defense program manager, she was in charge of civilian acquisition professionals in finance, logistics, security, contracting and cost analysis oversight of government and contractor activities, she said.

At the top of her career, she said she supervised over 300 civilian employees and earned a six-figure-plus salary, when she resigned in 2005.

“I just left everything, walked away and started trying to find out what I wanted to do, my purpose” she said.

“I was being consumed with a constant drive for money, and I didn’t like that feeling anymore.”

She’d been living in Hyattsville, but was drawn back toward Baltimore in 2010.

She’d begun volunteering with non-profits and the 4-H program at the University of Maryland and working with children in Cherry Hill and other low-income neighborhoods – compelled by a highly personal reason.

“I lost five cousins to gun violence in Baltimore City,” she said. “These are good people who lost their lives not on the corner selling drugs.” One was shot for a leather jacket. One was was shot and killed by her husband while she was Christmas shopping.

“I thought Baltimore can do better than this,” she said. “Baltimore needs to offer these people who pulled the trigger something better.”

In addition to her general advocacy, Trueheart has focused her energy on a particular project in her neighborhood – the Liberty Rec and Tech Center, one of those threatened with closure as part of a mayoral consolidation plan.

Working with other community leaders, she’s helped organize fundraising events and reached out to the local tech community to help save the facility.

That’s what she said she was working on hours after her release from Central Booking.

“I’m talking to some lawyers. Then I’m going over to MICA to see what they’ve got. They’re donating surplus stuff for the rec center,” she said, referring to the Maryland Institute College of Art.

“I think we could get some art supplies, maybe some easels,” she added, always forging ahead.