Baltimore’s municipal workforce is not only expensive due to outmoded pension and health care benefits – it is also “unhealthy,” according to Mayor Stephanie Rawlings-Blake.

In a speech describing her 10-year plan for fiscal reform this morning, the mayor bluntly said, “Our workforce is unhealthy.” She explained that “nearly 50% of city employees and retirees have critical or chronic illness[es]” that drive up medical costs.

In a private conversation with municipal union leaders before the speech, Rawlings-Blake put the exact number of ill employees and retirees at between 46% and 48% of the workforce, according to two officials who attended the briefing.

When asked to break down that number between active employees and retirees, the mayor indicated that she did not know the answer and promised to get back with the information.

Ryan O’Doherty, the mayor’s chief spokesman, said after the speech that the figure of sick workers came from an earlier consultant’s study. He said he did not have on hand any specifics of the report’s findings.

Today’s speech was billed as a way for the mayor to discuss her ambitious plan for fiscal reform with hundreds of city stakeholders.

Due to limited seating at the Graham Auditorium at the Walters Art Museum, the event was held on an RSVP-only basis, with members of the public required to submit their names to the mayor’s office by last Friday.

As it turned out, Graham Auditorium was half empty, with only about a dozen seats on the second-floor balcony – reserved for the public – filled.

Altogether about 130 people attended, a large number of whom were department heads, mayoral staff and elected officials. 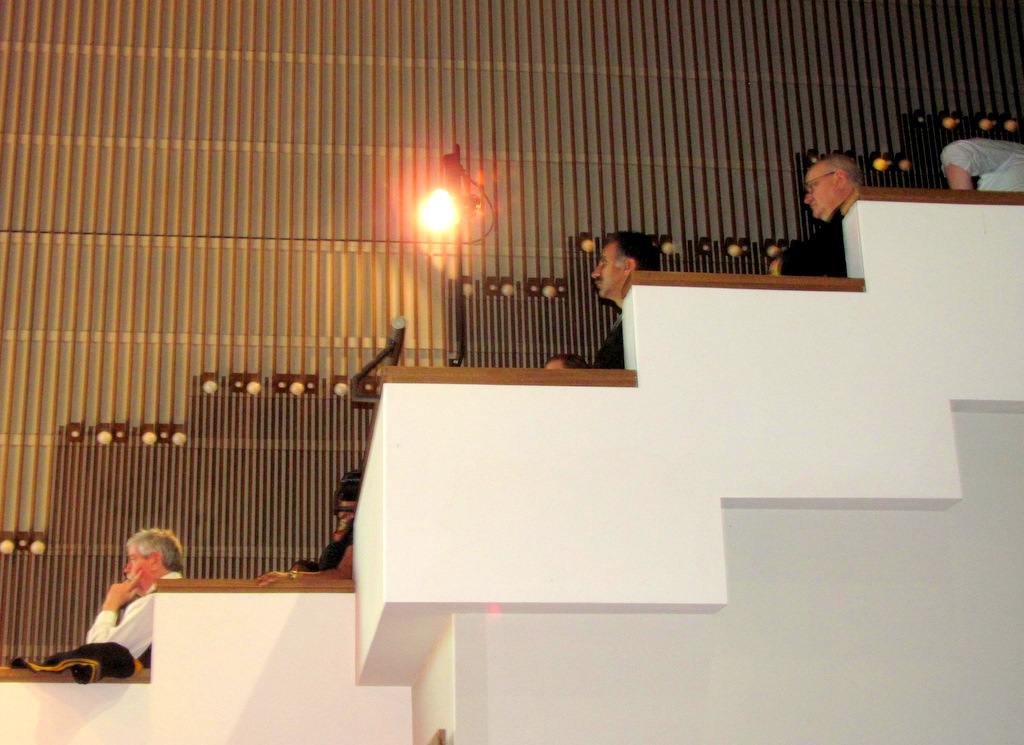 Working through a PowerPoint presentation, the mayor repeated the main points of the plan she unveiled in her State of the City address last week – reforming employee pensions and health benefits, instituting longer service hours for firefighters, and lowering property taxes to make the city more economically competitive with surrounding counties.

To combat the municipal workforce’s poor health profile, the mayor pledged to expand disease management and wellness initiatives with a “significant commitment of city funding and support.”

She said the city would initiate an “eligibility audit” for health benefits, to ensure that all city premium payments are directed for workers and dependents legitimately covered by the plans.

Other than this reference to audits, the mayor did not address, or endorse, the role of audits to examine the spending habits of city agencies.

Perhaps the most controversial aspect of her plan – to assess a yearly fee to collect residential trash and recycling – was noted without any details of the fees proposed or level of service. The mayor did pledge to use the funds collected from the trash fee to lower property taxes “dollar for dollar.”

Beginning her speech by noting that Baltimore lost more than a third of its population since 1950, she said “a new urban story” is beginning to emerge.

“Population loss is slowing to a near halt, and many neighborhoods are experiencing new growth. Baltimore is safer, public education is improving with growing enrollment, more vacants are being rehabbed and our businesses and institutions have made new investments,” she said.

The purpose of the fiscal reforms – which include some 100 separate proposals – is to maintain the city’s upward momentum, she said, and “grow” the population by 10,000 new families.

The reforms are based on a $460,000 report by Philadelphia-based PFM Group, with supplemental material provided by the Hay Group, Walker Benefit Services and Advanced Benefits Solutions. A 24-page color booklet distributed today lists 15 consultants who worked on the report.

No representatives from community groups were listed as participants in the project teams.

The mayor was today introduced by Freeman A. Hrabowski III, president of the University of Maryland, Baltimore County (UMBC), who later endorsed the idea of making Baltimore a student-friendly, high-tech city during a question-and-answer period.
____________________________
To download the 10-year financial report, issued in full today:
http://finance.baltimorecity.gov/bureausandoffices/budgetmanagementresearch/TenYearPlanBackgroundReport.pdf