That’s not as contradictory as it sounds.

The proposed $3.5 billion budget is 15% higher than current spending, but contemplates some drastic changes for city employees. Retirement givebacks and added health benefit co-pays for staff and retirees – as well as longer workweeks for firefighters – are the bedrock of her financial scaffolding.

By targeting employee contributions and eliminating the variable supplemental benefit, the city expects to save $20 million in health care costs this year.

With additional changes, such as replacing pensions with 401(k) plans for new hires, savings will increase over time, helping to wipe out a $750 million “structural” deficit that the mayor’s financial consultant, PFM Group, says the city faces between now and 2022.

Among them: a 25-cent-per-trip excise tax on taxi rides, 9% increase in residential water and sewer rates, 1% increase in the public parking garage tax, $48-a-year fee (on average) for stormwater improvements mandated by the state, and a billboard tax sure to raise the ire of Clear Channel and other outdoor advertisers.

On the other hand, the most controversial aspect of the Ten-Year Financial Plan – a “users fee” for residential garbage and recycling collection – has been dropped for now. And for those who hate those “Big Brother” speed cameras, the mayor is depending on a revenue stream of $11.3 million in tickets generated by 74 fixed and 18 portable machines.

The end result is a budget remarkably free of the massive cutbacks of services that the mayor strongly suggested were in store just a few weeks ago.

In fact, the city is using a one-time inflow of cash ($30 million) from changing the way it pays for its car and truck fleet to distribute $10 million for street repaving, $10 million for a “surge” of vacant house demolition and $5 million to upgrade recreation centers into community centers.

These funds will be paid for by city bonds and from a 338% increase in federal and state grants. Subject to the vagaries of possible “sequestration,” the feds have committed $19 million for the Central Avenue Streetscape – a big boost for the Harbor East crowd – plus $10 million to rebuild the crumbling Edmondson Avenue bridge over Amtrak and $5 million in Community Development Block Grants.

The state will contribute $137 million for enhanced nutrient removal at the Back River sewage treatment plant, $9 million for blight elimination (much of it earmarked to the East Baltimore Development Inc. to use around the Johns Hopkins Medical Center), and $33 million for street resurfacing, drainage and traffic safety improvements.

City revenue bonds, meanwhile, will go to replace an aging water and sewer system and to meet federal mandates to improve drinking water and stop overflow sewage from draining into the Chesapeake Bay. 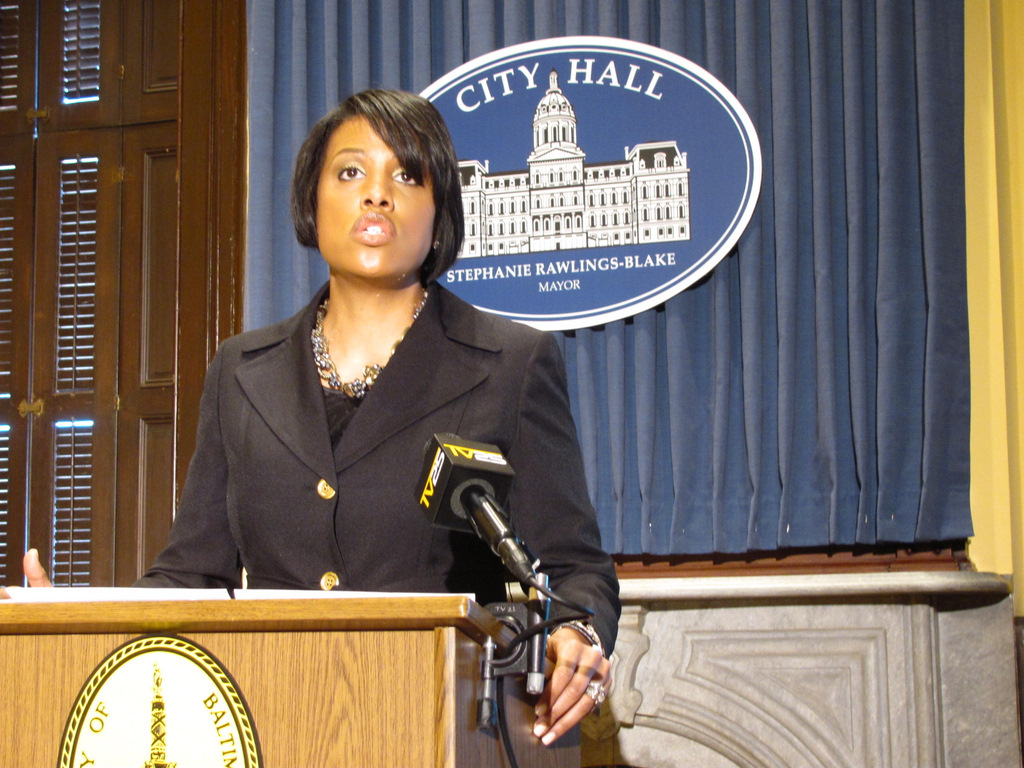 Mayor Rawlings-Blake lays out her budget plan at a news conference on Wednesday. (Photo by Mark Reutter)

Rawlings-Blake also wants to increase the city’s $2.4 billion operating budget by $67 million or 3%.

The biggest benefactor would be the Police Department and its new commander, Anthony W. Batts. Some $228 million is proposed for police patrols ($8 million over 2013), $51 million for crime investigation (a $4.6 million increase) and $33 million for the Violent Crime Impact Division (a $5.2 million enhancement).

Offsetting these increases will be a $2 million cutback in the city’s homeland security program and one less police helicopter buzzing over the city (saving $1.2 million in personnel, fuel and maintenance).

While the Ten-Year Financial Plan calls for a 10% cutback in the city’s workforce by 2022, those cutbacks won’t be happening now. The new budget envisions a grand total of 18 eliminated jobs, leaving 10,146 positions paid through the general fund.

So what does the budget represent in terms of the mayor’s goals?

It means safer streets, better schools, stronger neighborhoods and innovative government, according to the mayor’s presentation at City Hall. This year she will be able to achieve her vision more fully, aided by the first increase in state aid in several years.

Through a complex mix of state-formula aid, general obligation bonds, and revenues from the beverage container tax and future casino revenues – the mayor is proposing to funnel $42 million into the physical renovation of city schools. Far short of the $2.4 billion needed to modernize the system, it’s still substantially more than school allocations in previous years.

In keeping with her 2011 election pledge, Rawlings-Blake proposes to reduce the property tax for homeowners in 2014. The new rate would represent an 8 cent – 3.5% – rate cut over the last two years and is in keeping with the mayor’s “20 Cents by 2020” initiative.

In terms of government operations, the mayor steers clear of any substantive changes. The mayor contemplates modernizing city agencies (especially through IT expenditures), but not reforming them.

From the reliance on high-priced consultants that advise many government agencies to the practice of EWOs (Extra Work Orders) tacked onto big-ticket contracts – the inner workings of City Hall will go on next year as it has for many previous years: unchanged.

To illustrate: the mayor is allotting only $1 million to meet the new charter mandate of every-fourth-year audits of major city agencies.

That’s far less than the $2.2 million requested by the Comptroller’s Office.

While less draconian than the last three budgets, the 2014 plan will not be without its political flash points.

Foremost is the administration’s continued effort to shift firefighters to a three-shift schedule. Currently, firefighters work on two 10-hour day tours and two 14-hour night tours. Under a proposal put forth by Fire Chief James Clack, they would work one 24-hour shift, followed by 48 hours off, making for a 52-hour workweek compared to 42 hours at present.

The new budget does not dismantle any more companies. But the shift change would eliminate 156 firefighter positions – to be abolished through attrition – and eventually result in a savings of $9 million a year, according to mayoral spokesman Ryan O’Doherty.