From the 1970s expressway war to the 1980 opening of Harborplace to the 2011 Occupy movement, the Inner Harbor has held constant prominence as a philosophical battleground.

As a symbol of Baltimore’s attempt to reinvent itself from a factory town to a white-collar hub, the Inner Harbor has been embroiled in one “game-changing” scheme after another. As a result, the most important element of the district has often been overlooked: how to make this waterfront asset work as the city’s most inviting urban place.

Faced with a rising tide of vacant office space, the Rawlings-Blake’s administration is trying to entice developers to convert empty buildings into apartments through lucrative tax breaks.

In another sign of malaise, a major empty space in Harborplace was filled last June with a Ripley’s Odditorium, an attraction shared by dozens of American tourist towns, with the Bmore twist of a Chessie monster draped across the pavilion.

Now ASG has been rehired by the Waterfront Partnership and Greater Baltimore Committee to prepare a new Inner Harbor plan under a new catchphrase, “a playground for Baltimoreans.” 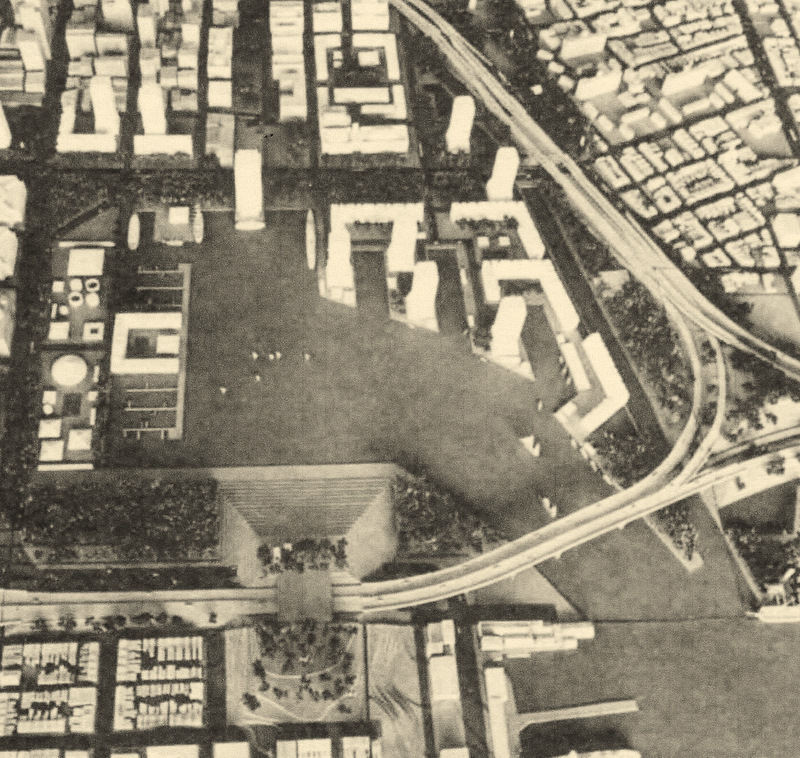 Some 40 years ago, city fathers aimed I-95 like a dagger across the harbor, slicing through Federal Hill and turning what is today’s Harbor East into a giant interchange with I-83. Strong citizen opposition put the brakes to the plan.

The playground metaphor suggests an emphasis on the things that locals would want, a larger version of the neighborhood swing-set and jungle gym so-to-speak, rather than convention space, new office buildings and cheesy Chessie monsters.

The trend is clear – downtown is becoming a neighborhood and the city’s traditional hub of white-collar jobs is dispersing eastward toward Harbor Point.

The previous ASG plan seemed directed toward stopping this trend by appealing to high-strung adrenaline junkies, as testified by a YouTube video produced by the Greater Baltimore Committee that ends with Bruce Springsteen’s “Born to Run.”

It’s no wonder the city decided to annually turn the Inner Harbor inside out for a Grand Prix of “suicide machines. . . fuel injected and steppin’ out over the line,” as Springsteen sings in the same song.

But turning downtown into an appealing neighborhood playground calls for a totally different approach.

A neighborhood is a refuge, a place to center yourself, a place you come home to. Not a place where every move must be choreographed around encounters like 180 mph racecars and their portable grandstands.

Think Mr. Rogers’ neighborhood, not Springsteen’s. In such an urban theater, residents should be the stars, not the “extras.”

The opportunity is there for such a transformation, because this latest Inner Harbor study has been billed as a “road map” of incremental, fundable projects, and not just a grand breathless “vision.”

Getting Back to Reality 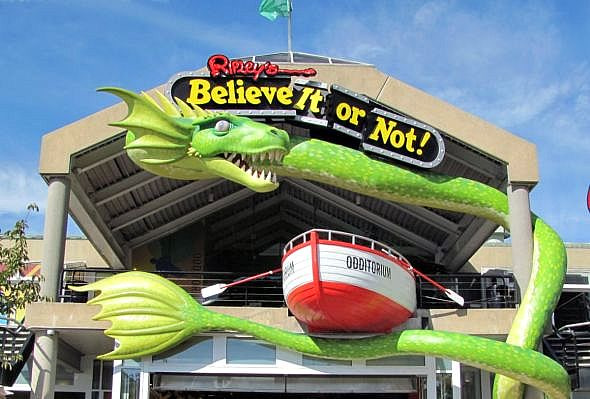 Is this the future of Harborplace? (Photo by Mark Reutter)

The city then remade ASG’s vision into a narrower streetscape by pushing out the building fronts with a whole new series of additional “big box” stores of the type that have already closed or that haven’t gotten off the ground at the Howard Street Superblock.

In its final iteration, the city settled for simply re-grading Pratt’s ivy beds for new grass and sidewalks, and creating a south side bikeway that was functionally designed as a sidewalk. It works about as well as bikes on sidewalks usually work, which indeed is an improvement.

The city also planned to build an expensive new traffic roundabout at the intersection of Light Street and Key Highway to lend more of a “Harbor East air” to that desolate spot of intersecting concrete.

But that plan ran into opposition when community folks realized that from the standpoint of pedestrians, the plan amounted to little more than replacing the traffic signals with yield signs. The city then went back to the drawing board.

As the Inner Harbor’s perimeter, Pratt and Light Streets are its interface with the rest of downtown, and so are critical to the way the Inner Harbor is used by locals. The failure of this interface is perhaps best illustrated by the way Harborplace turns its back on the streets, except for the loading areas and dumpsters.

Pedestrian crossings are particularly bad on Light Street. Its main pedestrian spine down Conway from Camden Yards had to be closed to pedestrians many years ago for safety. The only alternatives are the south side of this intersection, which is discontinuous at the west end at Camden Yards, or two blocks away at Pratt Street (to the north) and Lee Street (to the south).

The right-of-ways of both streets are wide enough to create vast improvements. The key is to split both streets into two physically separate roadways – a through street for traffic and a local street for local access.

Then instead of cluttering the Harborplace frontage with driveways used for whatever the vehicles feel they can get away with, there should be classic urban sidewalks which establish a clean relationship between the street and the buildings, just as with any traditional street-oriented urban building.

The street itself should have regulated short-term loading zones and the buildings themselves should be retrofitted or expanded with internal service facilities. Harborplace’s Pratt Street service “outhouse” and Light Street screening wall should go. 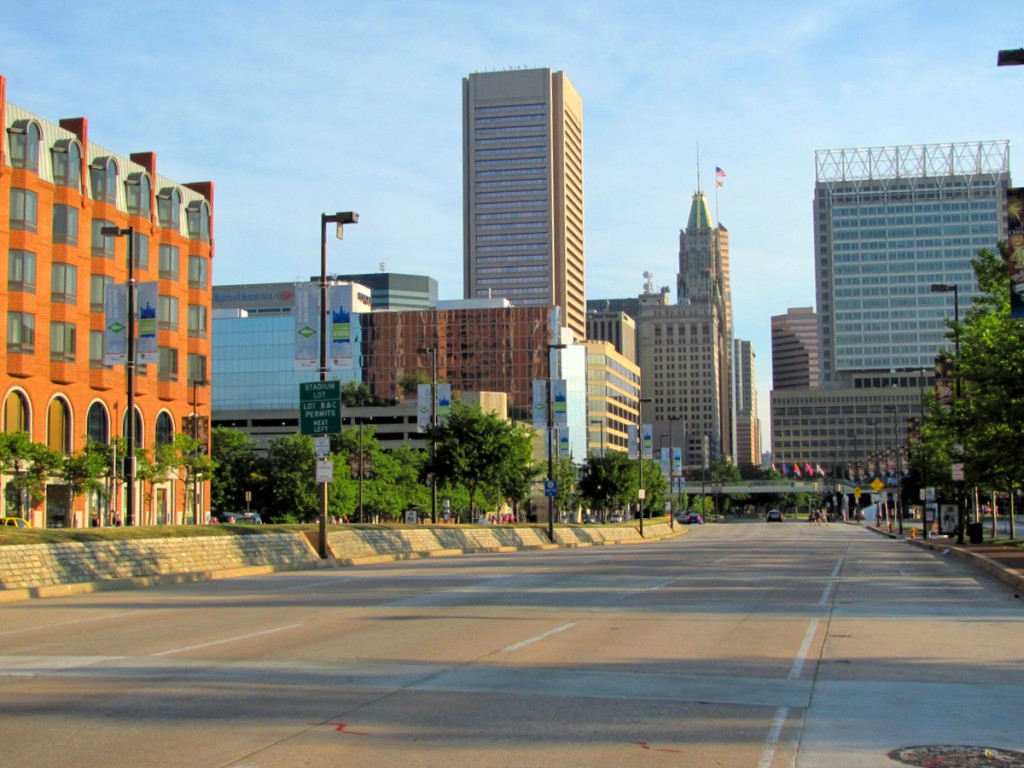 The five lanes of northbound Light Street are quiet on a Sunday morning but still a formidable barrier for pedestrians. (Photo by Mark Reutter)

Pratt and Light’s local service roadways can also be designed with attractive pavement treatments that integrate them with the pedestrian spaces and make the entire street look narrower.

Light Street, in particular, can be made far narrower than the current intimidating ten-lane width.

The bulbous median walls must also go. Pedestrian crossings should be no more than a block apart. Pratt and Light should no longer function as a noose around the Inner Harbor.

The medians between the new local and through traffic roads can also be made into special places, doubling the amount of precious space for curb activities. These medians will be continuous for several blocks, unencumbered by driveways or intersections, perhaps as many as five blocks apart on Pratt Street between Light and Market Place, making them ideal for an uninterrupted bikeway as well as for joggers and purpose-driven walking.

Such a new emphasis on locally oriented design has its most crucial application in transit.

The impending downfall of the proposed Red Line is rooted in the futility of spending $1 billion-plus to try to bury it under Lombard and Fleet streets.

Possible routes of a surface streetcar network to create a natural flow of transit for Inner Harbor visitors and residents. (Prepared by Gerald Neily)

Instead, the Inner Harbor needs convenient user-friendly surface transit that will create an organizing theme.

A streetcar line that runs directly through the Inner Harbor is the perfect way to continuously call attention to transit’s presence as the way to get around. And the need to rebuild Pratt and Light streets to accommodate more local uses provides the ideal opportunity.

The line should also go through Piers 5 and 6 to reach Harbor East, rather than through the congested Pratt/President intersection.

Streetcars can have a special relationship with pedestrians that are virtually impossible with any other transit mode. Unlike vehicles on roadways, the tracks feel benign, and when the streetcar arrives, it’s simply another event in the ongoing surrounding urban theater.

Such a network would be geared for short trips where speed is less important than the experience itself, and a streetcar’s natural “catchment area” is ideal for the city’s 19th-century grid of narrow streets.

In short, as Ayers Saint Gross and the city take another stab at planning, the best way to think of the Inner Harbor is as a livable space. The goal for the district is not to be caught up in bigger, bolder, more pumped-up and “world class” schemes. The goal is to make the place more inviting.

If the Inner Harbor truly works, its extraordinary natural setting will speak for itself as an attraction to residents, office workers, shoppers and tourists alike.
________________
Gerald Neily was transportation planner for the Baltimore City Department of Planning from 1977 to 1996.