The Board of Estimates today agreed to defer for one week voting on an unprecedented increase in city water and sewage bills. But the mayor, who controls the panel, made it clear that she still supports the overall 42% rate increase.

The board’s action came after the Department of Audits, as The Brew reported exclusively yesterday, sought a one-week delay in voting so it could review the financial justification of the increase.

City Comptroller Joan Pratt complained today that the auditors were being asked to approve “something that we do not have a rationale for” and she accused the Department of Public Works of delaying delivery of financial information supporting the rate increases.

Before an audience packed with vocal opponents of the rate increase, Pratt asked for “a second” to her motion to indefinitely delay the vote until audits receives all of the information it has requested.

“Second,” Third,” “Fourth,” “Fifth,” members of the audience shouted out, until City Council President Bernard C. “Jack” Young quelled the crowd by saying, “I will second the motion.”

After Mayor Stephanie Rawlings-Blake and her two appointees, City Solicitor George Nilson and Public Works Director Alfred Foxx voted against an indefinite delay, Young said, “The nays have it and the motion fails.”

The parliamentary skirmish underlined the fact that the mayor appears determined to push through a 15% water rate increase to start July 1, followed by 11% increases each in July 2014 and July 2015, amounting to an 42% increase.

In previous board matters, City Solicitor Nilson has defended the right of Alfred Foxx to vote on agenda items that are proposed by his agency rather than abstaining.

Foxx is in charge of the Bureau of Water and Wastewater, which is requesting the water rate increases. Foxx’s abstention would have resulted today in a 2-2 vote, thwarting the administration’s effort to get the rate increase package approved quickly. 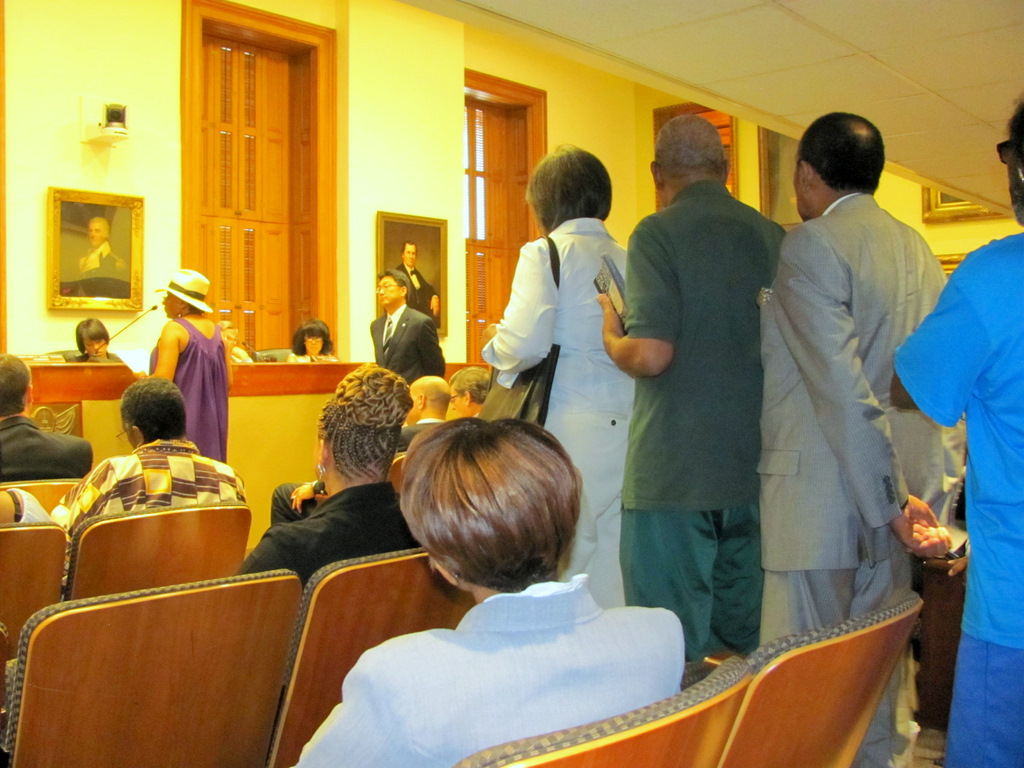 Citizens line up to protest the water rate hike at the Board of Estimates today. (Photo by Mark Reutter)

During two-minute presentations before the board, more than 15 citizens and two City Councilmen voiced objections to the rate increases.

There were no defenders of the proposal.

Leo Burroughs Jr., of Bolton Hill, questioned why the city has not tried to go after “big businesses and not-for-profit corporations” that owe millions of dollars in unpaid water bills. He cited the Sparrows Point steel plant, which received up to 40 million gallons a day of treated wastewater from the city before it went bankrupt in 2012.

“The steel mill closed its doors owing the city $6 million,” he said, citing a Brew news story. “George Nilson should be vigorously prosecuting all such offenders. Black and poor individual homeowners are forced to pay up, while the wealthy are aided and abetted by your malfeasance.”

Frank M. Conway Sr., clerk of the Baltimore City Circuit Court, complained that the water bill increases were part of the city’s “attempt to overtax the great citizens of Baltimore,” and said residents on fixed incomes or unemployed will find it hard to pay the proposed increases.

The board heard similar objections from dozens of others, such as Donald Smith, who described himself as a lifelong city resident.

“You are terrorizing the citizens,” Smith said. “Families like ourselves are moving out of Baltimore City.” A number of citizens noted the lower water rates in Baltimore County, which has not passed on the same rate increases as those in the city.

Rudolph Chow, chief of the water bureau, said the rate increases were necessary to meet a consent decree with the federal government to stop the pollution of the Chesapeake Bay caused by leaking pipes and sewage overflows during and after storms.

Displaying samples of corroded and broken pipes unearthed by water crews, he outlined a plan to increase the rehabilitation of the city’s system from 5 miles of new mains a year to 40 miles a year.

“Less than a Bottle of Spring Water”

Even with the proposed new rates, Chow said the average residential water bill will be lower than those of other East Coast cities and will amount to about $1 a day – “less than a bottle of spring water.”

Chow said the rehabilitation projects and consent decree call for rates that exceed the 9% annual hikes approved in recent years by the Board of Estimates. “Maintaining 9% increases in funds is not enough,” Chow told the board.

Councilwoman Mary Pat Clarke asked if the proposed jump to 15% (followed by the 11% increases in 2014 and 2015) was based on the actual capacity needs of the system. “Can we even spend it,” Clarke asked, “or are we putting it away?”

“Do we really need to raise water rates this fast at this time?” she continued, noting that the city is imposing a stormwater fee next week, which is projected to raise (or remove from the pockets of homeowners and businesses) $24 million a year.

The mayor did not interact with the citizens protesting the water rate increase at the Board of Estimates meeting.

Later at a press conference held in her ceremonial room, the mayor was asked about the “complete lack of confidence” in the city government’s “competence” displayed by citizens during the hearing.

This is how she responded:

“I heard that. Anytime we talk about increasing fees and people are struggling, I know it’s frustrating. I know councilmen talk about making painful choices. When I introduced a 10-year plan, I talked about the painful choices that Baltimore has to make based on our fiscal situation, and related that to the tough choices that people have to make around their table every night.

“It’s frustrating. Everybody wishes we were in a different situation, but wishing isn’t going to change it. We have to make tough decisions in order to change the financial future of our city. And when you do that, you can’t make those changes and make everybody happy at the same time. That’s what I call tough decisions.”