On top of the horror stories they told about strangers in their building, fellow tenants being robbed and threatening graffiti on the walls, the elderly residents of city-run Bel-Park Tower apartments had another message Wednesday:

It didn’t always used to be this way, they told the assembled group of city police officers, state lawmakers and top Baltimore Housing officials, including Housing Commissioner Paul T. Graziano.

“This is the worst it’s ever been. We used to have call buttons. If we could go back to [using] them, it would help,” said Patricia “Miss Pat” McEachern, one of about 75 residents who came to a meeting organized by Del. Jill P. Carter in the wake of a residents’ picket outside the Housing Authority of Baltimore City’s downtown headquarters last month.

“We can’t even sit outside without smelling urine. People who don’t live here are urinating outside,” said McEachearn, who has lived at the subsidized Northwest Baltimore apartment building for eight years. 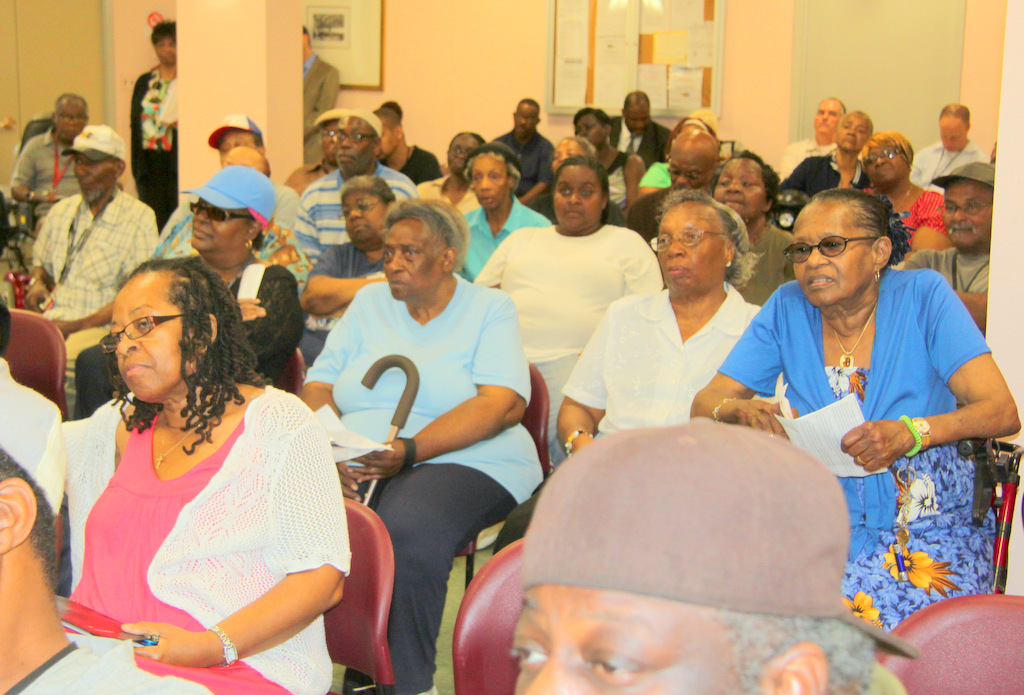 Bel Park Tower tenants at a Wednesday meeting with Baltimore Housing officials and others to air complaints about security. (Photo by Fern Shen)

An even more effective strategy, some said, was a “Tenants on Patrol” program, in which residents trained by the Housing Authority helped to keep their buildings secure.

“We used to have volunteers. . . It was six or seven people with walkie-talkies,” said Charles Buster, 79, a former president of the Residents’ Council. “We checked every floor.”

“As it is now, nobody knows nobody,” he said. Strangers are moving “from floor to floor, they’re threatening people, they’ve been robbing people in the parking lot.”

Addressing the tenants, many of whom entered the room on motorized wheelchairs, Graziano said he engaged his agency “at the the highest level” when he heard about the problems at Bel-Park.

“This is an issue we all take very seriously,” he said, noting that he had alerted Sean Buchanan (associate director of public housing), Kimberly Washington (chief of staff), Reginald Scriber (deputy commissioner of community service), Kevin J. White (inspector general) and Anthony Scott (deputy executive director), all of whom were at the meeting.

Graziano and his deputies promised that HABC would increase staff by the end of the week, step up security measures within “a couple of weeks” and meet again with tenants on July 10 at 1 p.m.

He said his agency had already taken action to increase security in Bel-Park but alluded to the challenge posed by criminal activity in the neighborhood (“clearly this building doesn’t sit in isolation”) and implied that the police could be doing more to help out (“our residents need police security and support as much as any other residents.”) 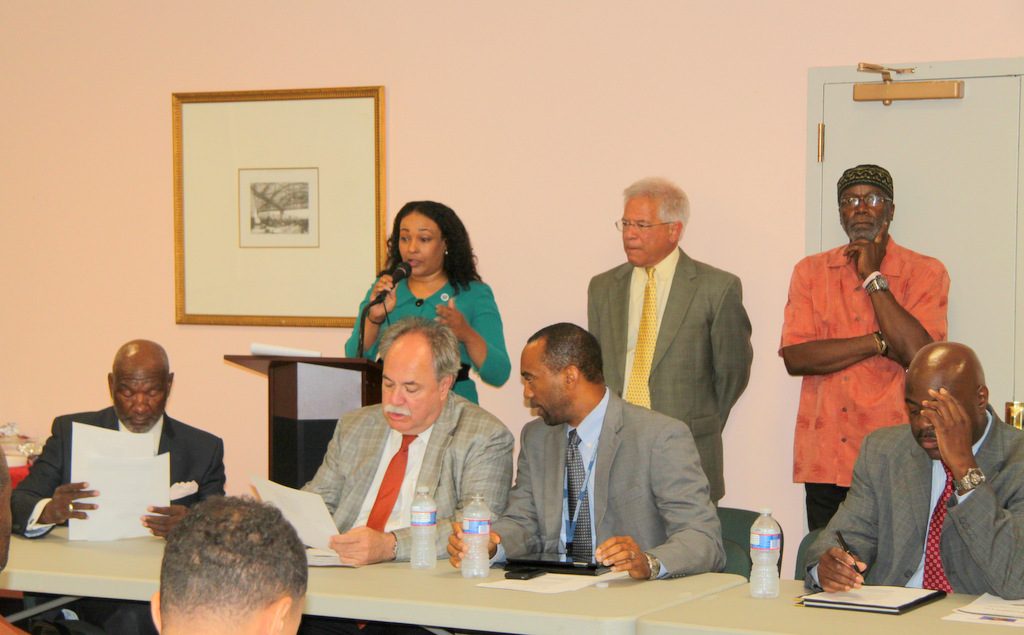 Paul Graziano, with Reggie Scriber to his right and Anthony Scott to his left. Standing (l to r) Jill carter, Sandy Rosenberg and Nat Oaks. (Photo by Fern Shen)

He addressed several specific issues the residents raised, including their main one: that strangers were being permitted to get past the front desk, enter the elevators and wander freely in the building. “Nobody should be going in unless the resident goes down and escorts that person upstairs,” he said.

As for the complaint by several residents that someone with a master key had been going into their apartments, using the bathroom and taking things, Graziano said there had to be a master key for all the units in the building “for emergency reasons.”

But if the key is “not in the proper hands. . . if we have to change the locks, we will,” he said, prompting one woman in the audience to roll her eyes and murmur, “Hallelujah.”

As for the tenants on patrol program, he said it’s an idea “we definitely would like to take a look at.”

Carter said she is hopeful the situation will improve but finds the severity of the problem and the official response so far “troubling.”

“These things should have already been in place. There appears to be some kind of bureaucratic apathy there,” she said, in a phone interview with The Brew. “These are certainly not new issues and the Housing Authority seems well aware of them. They clearly need to make some serious changes in the process of admitting people into the building.”

“It’s abominable that seniors are forced to live in fear and feel like prisoners,” Carter said. She noted that for the recent July 4th barbecue, Tenants Advisory Board delegate Mary Lawson had to grill the food and bring it inside to residents because security concerns still make it impossible for residents to gather  for the events outside. 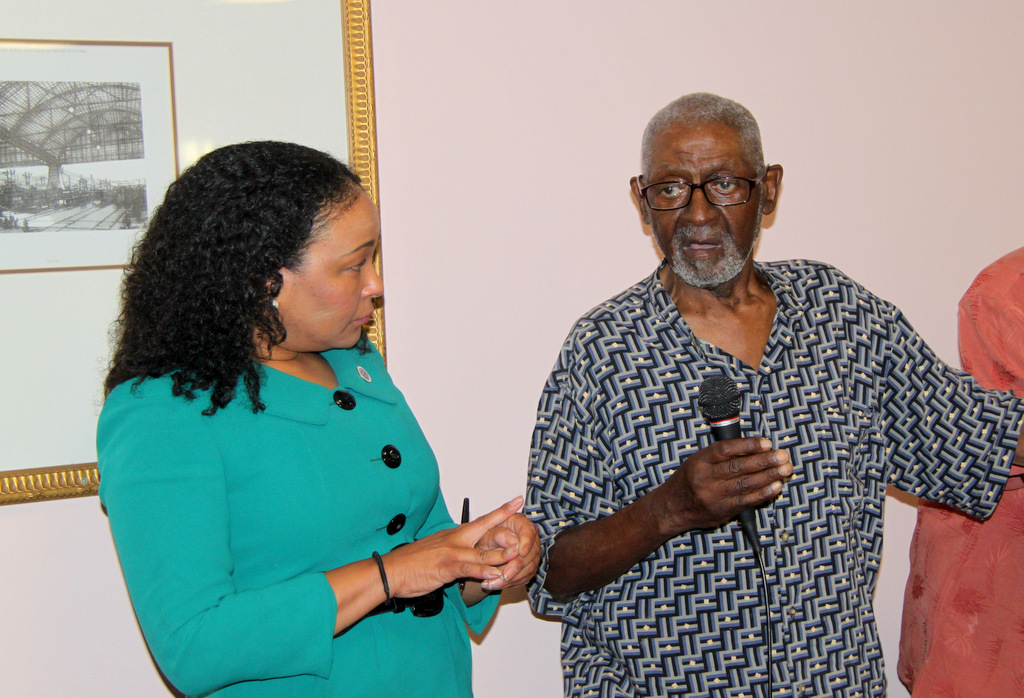 Residents at other Baltimore-area senior communities like Charlestown in Catonsville don’t have to live that way, she said, “would you want your mother or grandfather to live like that? Of course not!”

Graziano may have acknowledged the possibility of reviving the tenants patrol program in the meeting, but in earlier meetings with HABC, Carter said, she was told there wasn’t enough money for it.

The idea that Housing officials are dragging their feet “makes me think there’s a real problem of priorities at the top,” Carter said, “and if you ask whose responsibility it is ultimately to fix it, it rests with the mayor.”

The degree to which lawyers and police have a role in the Bel-Park problem was made clear by “RESIDENT ALERT” fliers (taped to the front door and distributed to tenants) with the picture a woman’s  face shown. “The person in the picture has been barred from Bel-Park Tower,” it reads in part. “Any resident who assists her in entering the building under any circumstance will run the risk of being evicted.”

“That lady! She is the ringleader! Her and her boyfriend!” a man in a wheelchair said during the meeting, prompting Graziano to advise him to make such allegations privately to his staff. 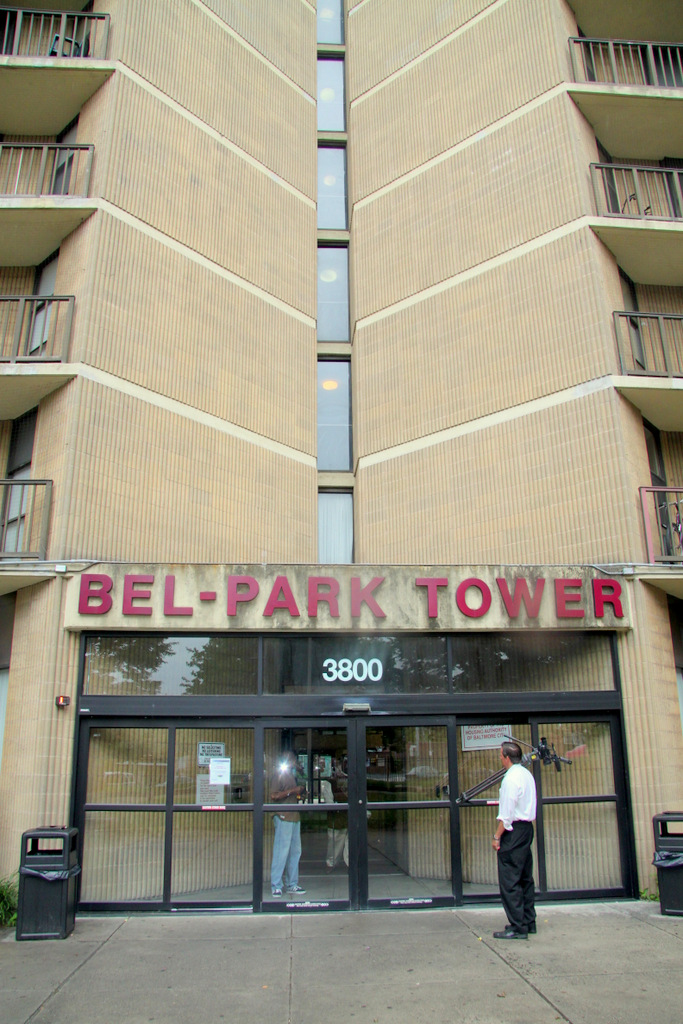 Another tenant, Sharon Jones, complained about graffiti in the building’s elevator that remained there for days, a message that her grandson saw when visiting her “and he told me it scared him.”

Why, one man asked, was HBAC’s housing police force dismantled?

It happened as part of a federal mandate 10 years ago when Martin O’Malley was mayor,” Graziano replied, saying they were told to turn to local police officers.

Speaking for the Baltimore City Police department, Capt. Marc Partee warned tenants that they will need to carry identification with them from now on.

“If you’re sitting outside and you don’t have your ID, we’re going to write you a citation for trespassing,” he said. “I’m going to be the hammer.” He chided them for not reporting and said after reviewing recent records he didn’t find “any calls  for robberies from this area.”