Baltimore Housing had promised a nighttime security guard who would sit at a table in front of the monitor’s booth and keep out the loitering troublemakers who have been robbing, threatening and generally terrifying elderly tenants.

But the security guard never showed up.

“After a while I had the maintenance man put away the table,” said Mary Lawson, delegate to the Residents’ Advisory Board for Bel-Park Tower. “We realized no one was going to come.”

On Wednesday, Lawson and other residents of the formerly-seniors-only apartment building on West Belvedere Ave. came downtown to ask Baltimore Housing officials what happened. 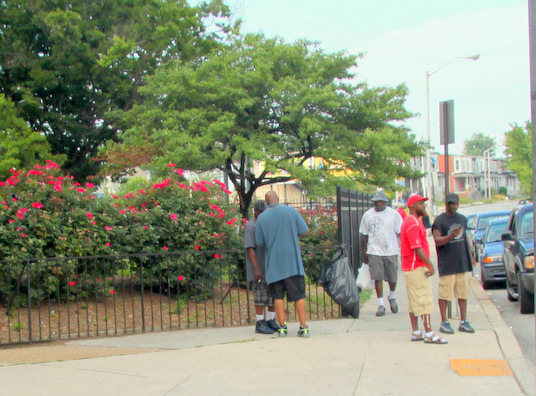 Afternoon scene outside the Bel-Park Tower earlier this week. (Photo by Fern Shen)

“They just told us it didn’t work out,” said Bernadette White, president of the Residents’ Council, after a two-hour meeting from which The Brew was barred by housing officials.

A spokeswoman for the Housing Authority of Baltimore City (HABC), which runs the 274-unit building, was apologetic but didn’t have much more to add.

“We have had arrangements with two different security companies. After agreeing to the contract, both companies opted to back out for their own reasons,” said Cheron Porter, director of communications for Baltimore Housing.

“We are working feverishly to find a new security company,” she added.  Asked to cite a reason for  excluding the media from the meeting, Porter said “sensitive” subjects were going to be discussed with staff.

Ever since elderly tenants from Bel-Park called attention to their plight on June 21 by picketing outside Baltimore Housing’s downtown headquarters, officials have been promising to help improve security there.

But they have also pointed to changes in federal housing policy they say have compelled them over the years to convert senior citizen housing into “mixed population” buildings. This has meant younger tenants with disabilities, including recovering substance abusers. 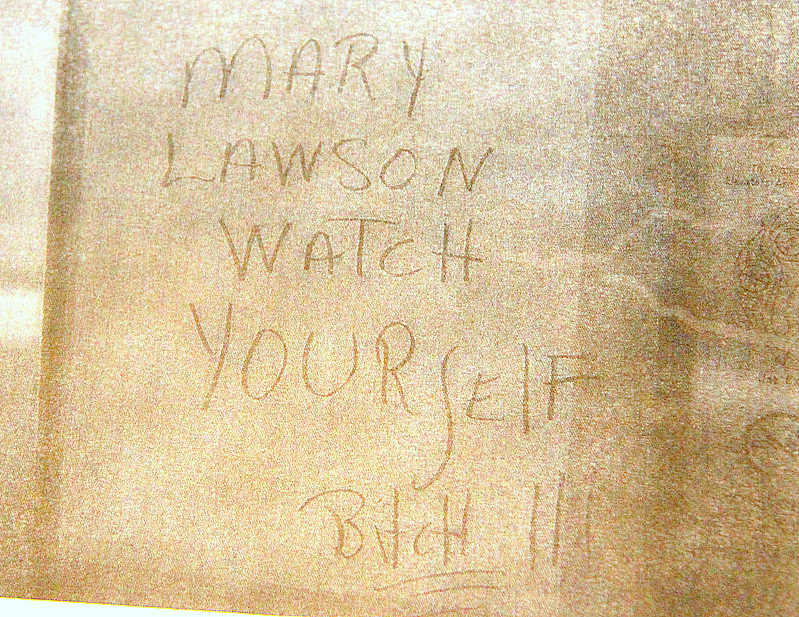 Mary Lawson has pictures of the threatening messages about her scrawled on Bel-Park’s elevators.

Lawson says the true definition is a little broader: “We got more drug addicts in here than rehabs.”

Longtime tenants at Bel-Park have said the new crowd props open side doors and intimidates the lone monitor in the glassed-in booth, so that loiterers wander the hallways at will – drinking, doing drugs, sleeping on mattresses in the halls and rattling apartment doors in the night.

At a recent meeting with more than 75 tenants, Housing Commissioner Paul Graziano and his top deputies assured residents they would improve building security.

Then-Captain Marc Partee (since promoted) of the Baltimore Police Department was there, and he and housing officials said they would help, but also urged residents to do their part.

“Not Even Close to Acceptable”

Speaking to The Brew by phone, state Delegate Jill P. Carter blasted the city for its failure to make changes since that meeting.

“I’m sure HABC officials are well intentioned but to date they have failed to provide the remedial measures promised,” Carter said. “It’s not even close to acceptable.”

Carter said her office solicited a security company, “which did a walk-through Wednesday and intends to submit a proposal on Monday.” She said they are also “working on getting a Baltimore Police Department substation at the building.” 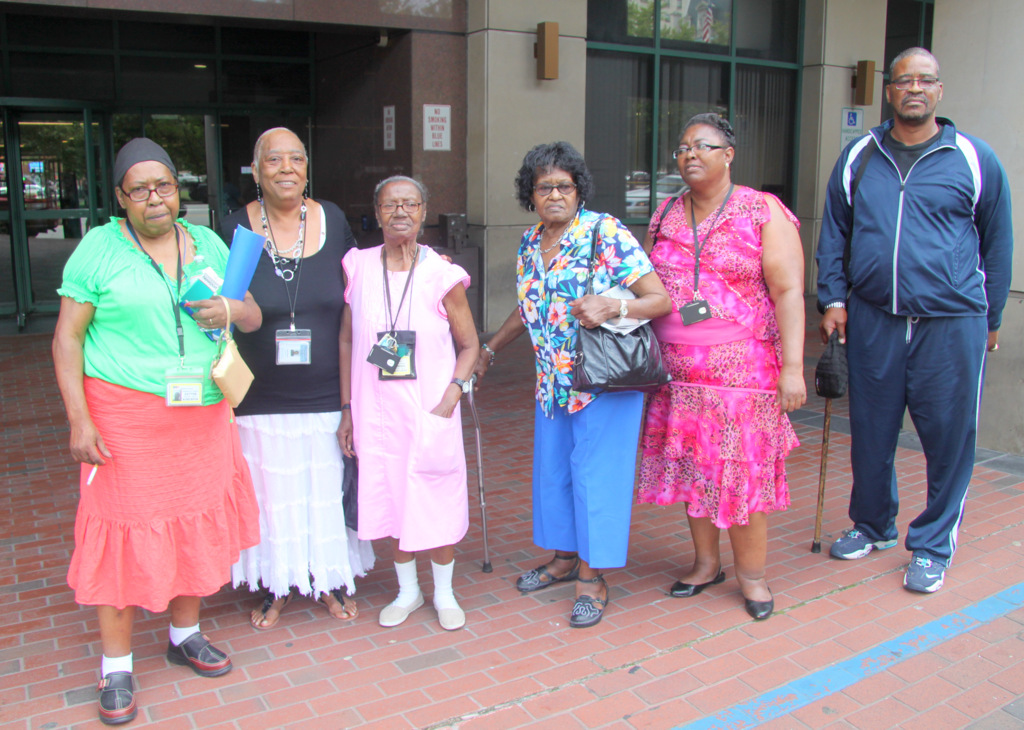 She also said she was “troubled” that the police department “did not make good on its promise to immediately remove trespassers through issuance of citations.”

Both Housing and police officials have pointed to the challenging neighborhood, not far from the mayhem that has been dominating headlines lately as Baltimore’s homicide count sees a shocking summer spike. But Carter says there’s no excuse for not protecting vulnerable adults.

“Failure to promptly address the security issues continues to put residents at risk, as well as HABC because they know of the urgency of the situation and as yet failed to provide immediate relief,” Carter said, apparently alluding to the agency’s potential liability.

(In 2010, a jury ruled the city of Charlotte, N.C., negligent in the strangling death of a 63-year-old woman by a fellow public housing tenant who was a convicted felon.)

Bel-Park tenant Walter Jackson said he fears such a tragedy in Baltimore. “Something bad happening to somebody – that’s the only way they’re going to change anything here,” he said.

Long-time Bel-Park resident Lawson, 73, said “this used to be a wonderful place” but that problems have evolved over time. 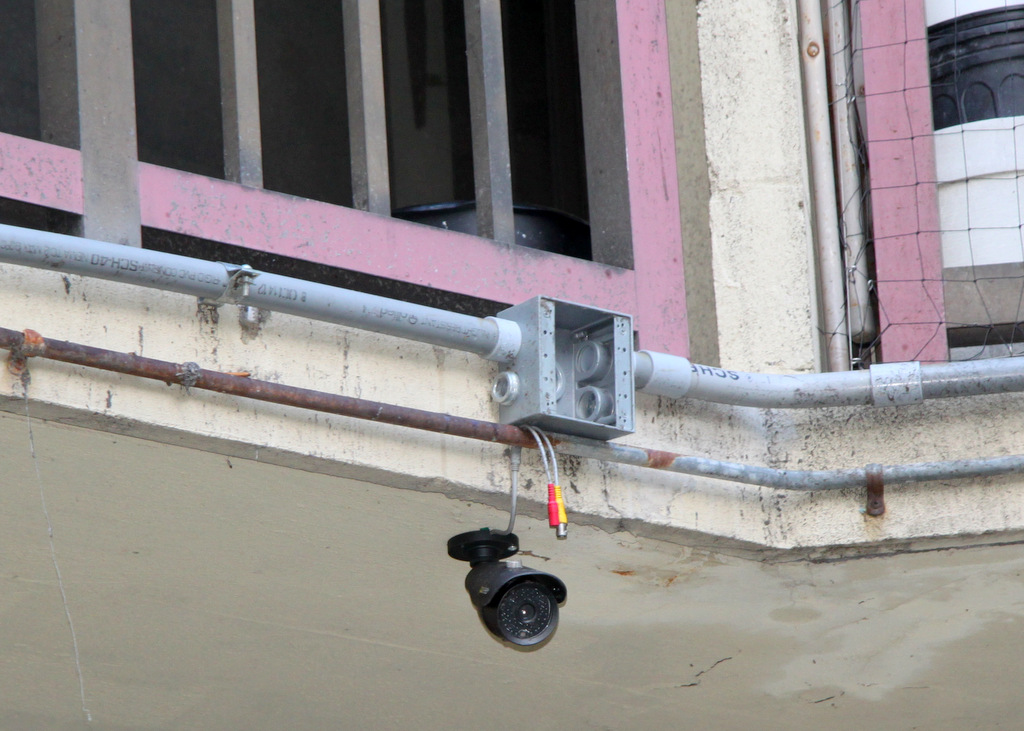 Security cameras on the outside of Bel-Park Tower don’t appear to be hooked up. (Photo by Fern Shen)

On a recent afternoon, she gave a reporter a tour, pointing to the crowd composed mostly of young and middle-aged men congregating at a nearby liquor store and in front of the apartment towers.

She pointed to the high metal fence around the building installed (at her urging) by the city to replace a low wall where she says people loitered – drinking and conducting drug deals.

On the outside of the building, she noted, there are security cameras that were installed a few months ago. But for some reason, they were not hooked up. A sign that weeks earlier had been taped to the front entrance warning tenants not to let a banned person inside was no longer there.

A group of tenants outside complained to Lawson about the building’s community room not being open. It has been closed for the last three years in the wake of problems that Lawson said were caused by a tenant who has since left.

Before then, the room had been open 24 hours a day, many residents recalled wistfully, with chairs where people could watch television, drink coffee, read magazines and socialize.

“How long do you suffer for something somebody else did?” said Eunice Bustion, 84, speaking to Lawson.

“It’s not fair! Give us something to do!” said Dorothy Washington. “They listen to you!”

Lawson was adamant, though, that the community room could not be opened and even doubted that better security could make it possible. She said in the final days before it was closed, it was a nightmare.

“We had people coming in and doing drugs and drinking and in the morning the maintenance man had to clean it up,” she said. “Liquor bottles, all kinds of needles.” 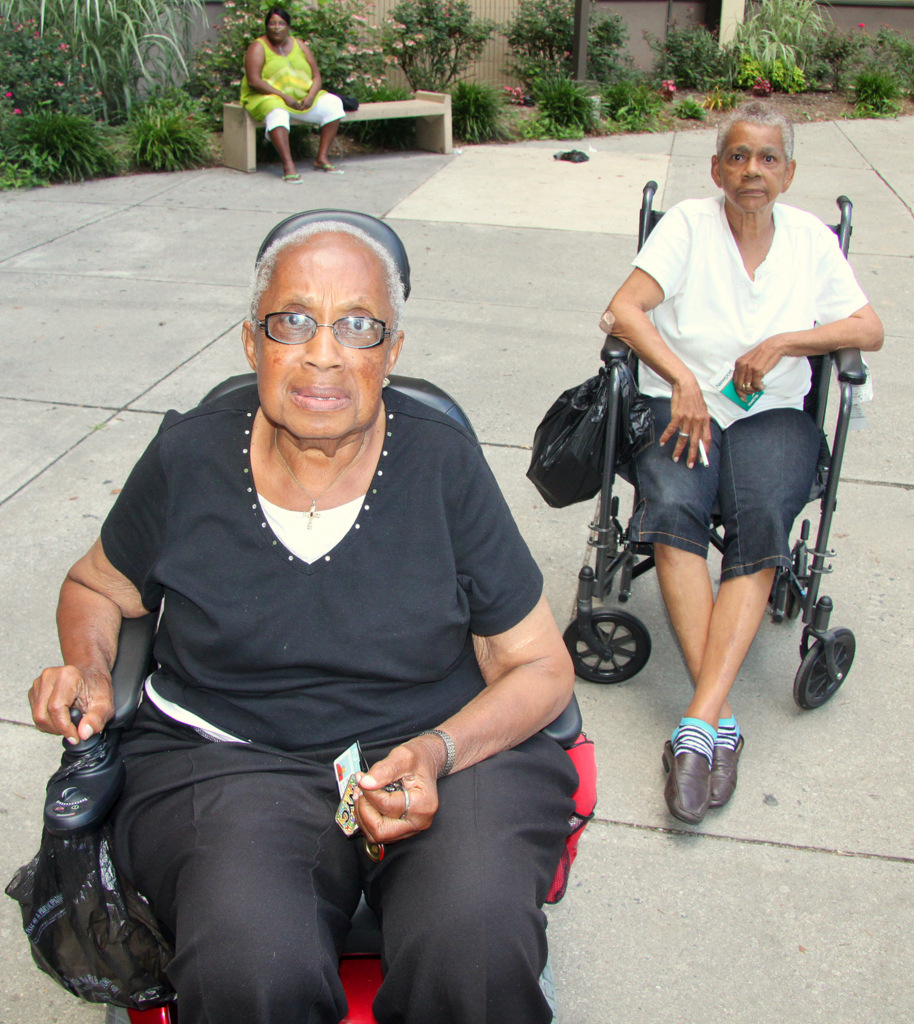 A small room with a pool table and the laundry room, both of which she now locks at 8 p.m., had similar problems, she said. “They were in there doing drugs, having sex.”

Lawson showed a reporter photos she had taken of the graffiti scrawled on the elevators threatening her and others who try to keep order in the building. “MARY LAWSON WATCH YOURSELF BITCH!!!” and another one says, referring to the housing manager, “Worsley Will Die N 5 DAYS!”

In the meantime, she said she just wants the city to provide some guards or police protection and, at the very least, mirrors in the hallways “so you can see if someone is waiting for you around the corner.” 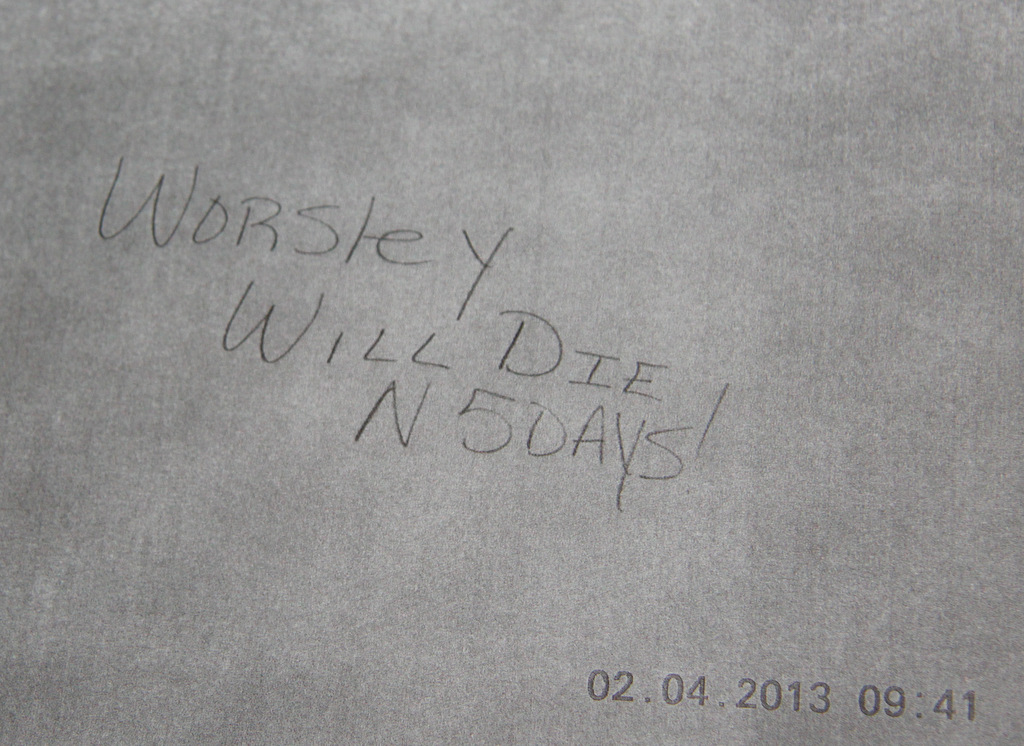