Public meetings about controversial projects have a familiar narrative arc, but the one in Morrell Park this week moved quickly past the first stage (quiet listening) to the second (audible groans and oaths).

It happened after a CSX Transportation official described the number of trucks that would be rumbling through this stable blue-collar community in southwest Baltimore after the company’s proposed “Baltimore-Washington Intermodal Rail Facility” was up and running.

Every hour, between 30 and 40 trucks would enter and exit the Bernard Drive entrance, he said.

“30 to 40!” several people grumbled, while others simply repeated the number around the American Legion Hall on Desoto Road, which was filled to capacity with about 175 people on Wednesday.

When someone rose to ask a question about the truck volume, CSX’s Richard Hisrich pointed him toward one of the poster boards set up around the room’s perimeter.

“You can take that question to one of the stations after we finish the presentation,” Hisrich said. (Each board had graphics and talking points about terminal operations or safety and security and was staffed by a city, state or CSX official.)

The murmuring erupted into heated protests as people realized there was to be no opportunity to stand up before the group and speak. “We don’t want stations, we want answers!” “I think this was a done deal before we even came in here!” “They’re trying to split us up!”

Robert Tivvis, a 51-year Morrell Park resident, drew loud applause when he bluntly told the half-dozen train company officials and government bureaucrats: “This is a community meeting. Talk to us together like we’re a community!”

Another telling moment was a silent one. A speaker asked for “anyone who is in favor of this” to stand up. No one did.

Sought by residents for months, this was the first community-wide meeting about the $90 million expansion of the existing Mount Clare railyard into a 24-hour container transfer facility.

The 70-acre parcel (located between Wilkens and Washington avenues, bisected by Interstate 95) is only the latest site where CSX has tried to locate such a facility in Maryland. Several suburban sites were floated and rejected amid community opposition, which was particularly strong in Howard County’s Elkridge area.

The project calls for tractor trailers from the Port of Baltimore to bring sealed containers to the facility, where they would be “double-stacked” on freight trains. The transfer is necessary because CSX’s 118-year-old Howard Street tunnel is too low for double-stack trains to pass through.

State officials say the project would essentially relocate the current CSX transfer depot at the Seagirt Marine Terminal, clearing out space for the Port of Baltimore to accommodate increased traffic from the widened Panama Canal.

Maryland Gov. Martin O’Malley and Baltimore Mayor Stephanie Rawlings-Blake support the project as a way to enhance the port and boost the local economy.

As for CSX, it’s a part of their National Gateway Project aimed at moving freight more efficiently from East Coast ports to inland destinations.

Some information has been made public. There would be 324 tractor trailer trucks a day at the site, according to the city’s traffic impact study. CSX has said there would be as many as five intermodal freight trains a day, two large cranes and lighting on poles as high as 80 feet.

But residents said they had many more questions, including a list of dozens that CSX officials have ignored, according to Paul DeNoble, who spoke on behalf of the Morrell Park Community Association and Morrell Park and St. Paul’s Improvement Association. 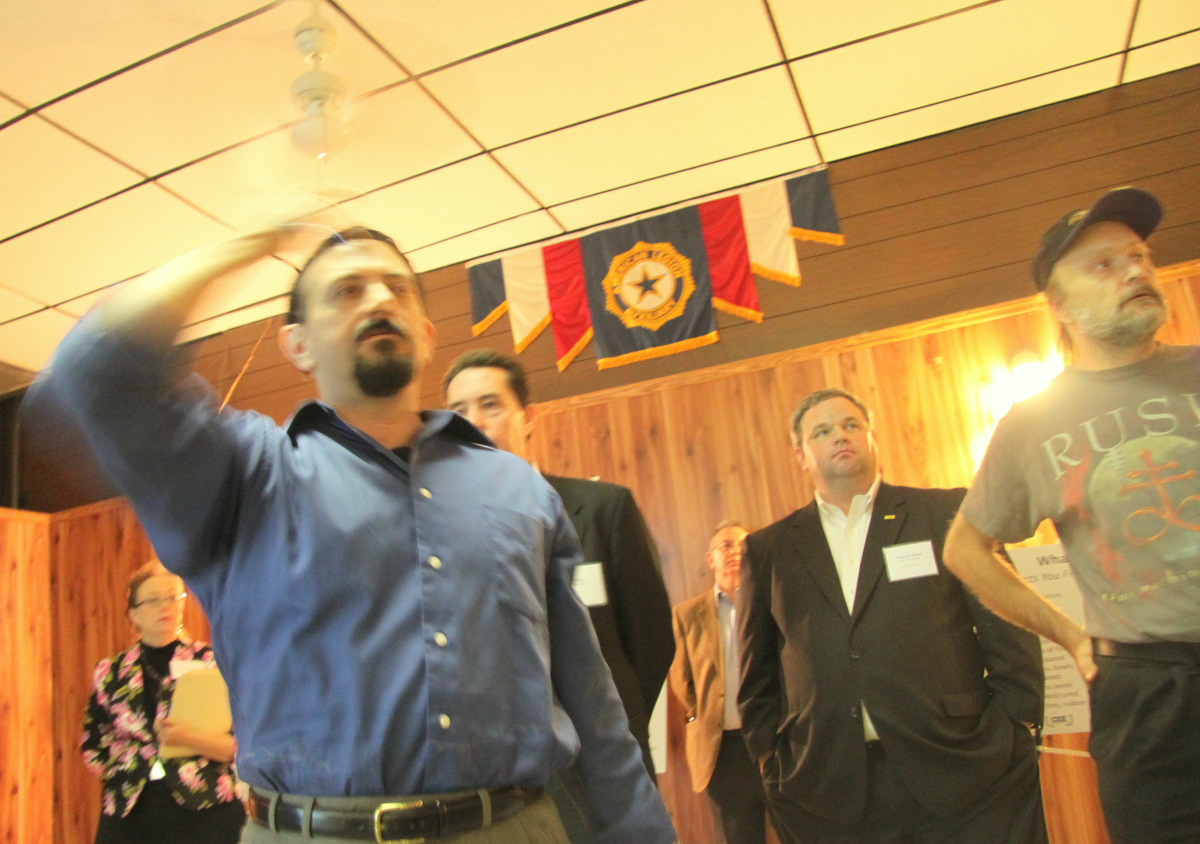 Paul DeNoble speaks, and CSX and city officials listen behind him. (Photo by Fern Shen)

“They kept putting us off and telling us our questions would be answered at the meeting,” DeNoble said, explaining why resident were so angry about state, city and company officials assuming control of it. “This is our meeting!”

The executive director of the non-profit National Center for Healthy Housing, Rebecca L. Morley, said the CSX staffers signing people in at the door wouldn’t allow her to set up a table with fliers.

The center has published a 132-page study, funded by foundations including the Robert Wood Johnson Foundation and the Pew Charitable Trusts, on the public health impacts of the facility.

Morley said she was told she could set her fliers (summarizing their findings) near the stack of sanctioned information sheets (marked with logos representing the state, city and rail company).

But every time she returned to check her stack, she said, it was gone: “They keep disappearing – and not from people taking them one by one.”

At Wednesday’s night meeting, people with homes in the two residential neighborhoods abutting the project scrutinized the aerial photos to see how close the intermodal terminal would be. Patty Michel, who has lived on Spence Street for 12 years, already knew.

“I’m three streets from where the main tracks will be. I think this is going to be devastating,” said Michel, speaking to The Brew before the meeting got underway. She said she is dreading the prospect of truck and train noise,  exhaust fumes and bright lights.

“We like our quality of life. Will we be able to sit in the yard and look at the stars in the sky?” Michel asked.

Others noted the proximity of schools and raised the specter of hazardous waste spills and increased respiratory illness from truck exhaust, noting that residents are already affected by a nearby industrial parks and citing a recent study that found Baltimore to have the highest rate of air pollution-related deaths in the country.

“I don’t want to live in a health sacrifice zone,” said Heather Moyer, of Grinnalds Ave.

Many said the traffic congestion from trucks on roads surrounding the project would be intolerable. Mary Bush’s face fell as she listened to Valorie LaCour, of the Baltimore City Department of Transportation, explain plans to mitigate the traffic impacts.

“We’ll be making minor modifications, such as increasing the radius so that trucks aren’t jumping the curbs and hitting poles,” LaCour said, as she ran through her presentation.

Bush assailed CSX for not offering to buy her house or to compensate her, asserting that its value would plummet if the rail facility is built next door.

“I step outside my door and there’s the tracks,” she said.

Among the questions the residents pressed on proponents of the project was how it would benefit residents of Morrell Park and surrounding communities.

Several audience members asked what percentage of total jobs would go to local residents. CSX officials’ answer: about 50 permanent jobs will transfer from Seagirt to the new facility. Beyond that, they spoke of “200 indirect jobs,” as well as hundreds of construction jobs as the facility is built.

They said they had been working with state and city officials to explain these employment benefits. As talk turned to politicians, the crowd called for City Councilman Ed Reisinger to come to the microphone.

Reisinger, who hails from Morrell Park, is the mayor’s point man on the City Council and has publicly praised CSX in the press.

“You can shoot all the scud missiles you want and throw tomatoes,” said Reisinger, facing the crowd. He assured them that “nothing is carved in stone” and promised to go back to the mayor and “tell her there are a lot of problems, a lot of issues and concerns.”

“Tell her we don’t want it!” several shouted. “I got it,” Reisinger replied. 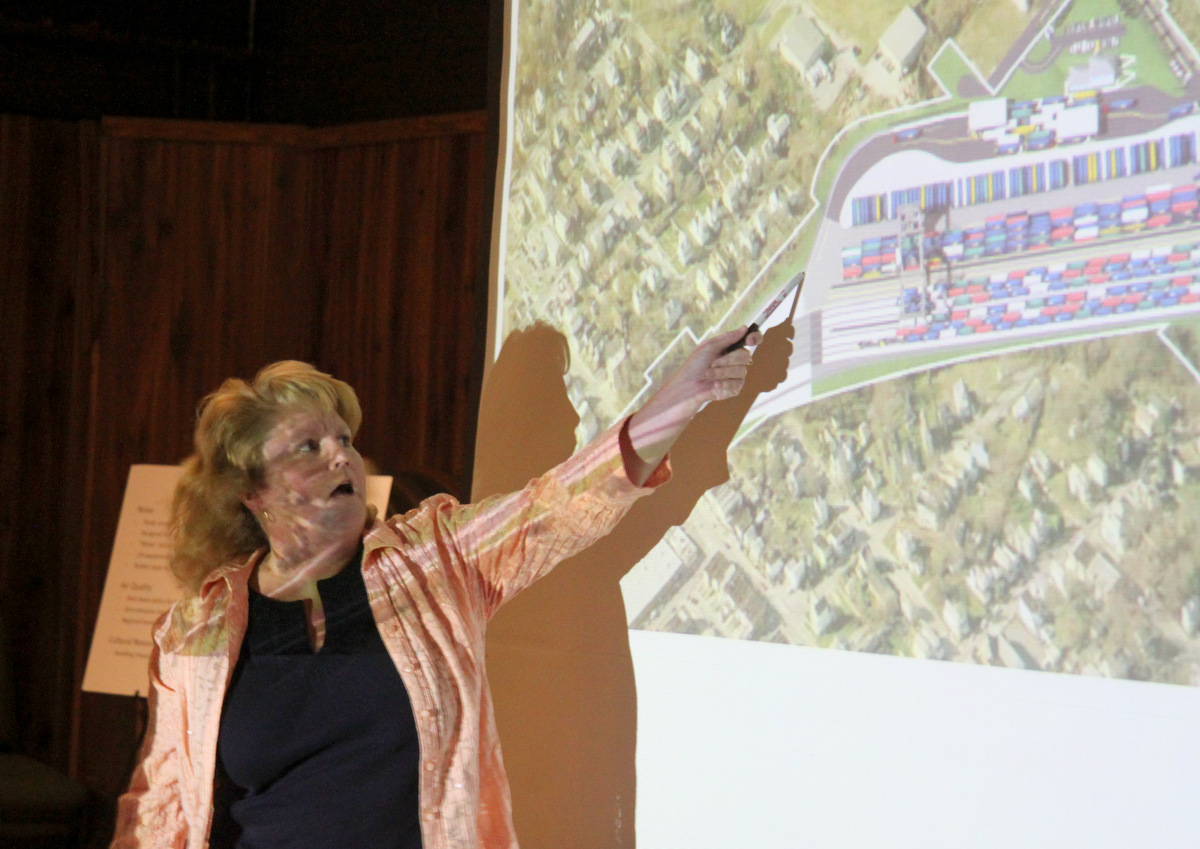 Morrell Park resident Laurie Weishorn points out the proximity of the project to residential areas. (Photo by Fern Shen)

But he also signaled some skepticism about complaining residents. “With all due respect, when you bought your homes, you saw railroad tracks.”

Asked about that remark later, DeNoble called it “shameful and deceptive” and said the proposed facility would go significantly beyond what’s at the railyard now.

“It just has a couple of tracks running through it,” he said. “CSX currently has no right of way to access the tracks. There’s no truck traffic. It’s the same as the thousands of other tracks that run quietly through the country.”
__________________________________
UPDATE:
This came in after publication: A statement from Melanie Cost of CSX Corporate Communications

“We heard and appreciate the community’s concerns and comments. They will help us as we continue planning for the facility. As we mentioned at the meeting, we have been working with the state, city, and the Morrell Park community throughout the planning process to develop a facility that best fits the needs of everyone involved. That work included hosting and participating in dozens of meetings over the past ten months, sharing information about preliminary options with business leaders and the broader community about this evolving project. With all terminal siting projects, we comply with all local, state and federal regulations designed to govern the development process, safeguard public health and protect the environment.”