How safe will citizens be when workers start piercing a five-foot-deep cap above 2 million tons of contaminated waste – and trucking some of the spoils through city streets?

Amid lingering questions about the work planned on the Exelon Tower, Councilman James B. Kraft is holding a public hearing next month to look more closely at contamination issues at the Harbor Point project.

Kraft said that dissatisfaction expressed by several Fells Point residents with the information provided at a recent open house led to his decision to call for a meeting on October 7, from 7-9 p.m., at the Morgan Stanley Building, 1300 Thames St.

The meeting will include presentations by the Beatty Group, developer of the $1 billion project on the west side of Fells Point, and Honeywell International, owner of the former Allied Chemical factory whose estimated 2 million tons of wastes are buried at the site.

Those wastes include unknown amounts of hexavalent chromium, a known carcinogen whose impact on a California town was depicted in the film “Erin Brockovich.”

Officials from the Environmental Protection Agency (EPA) and Maryland Department of the Environment (MDE), parties to a 1989 consent decree to contain the chromium wastes, will be on hand to answer questions.

Useful Information or “a Sham”?

“I want everybody’s questions answered,” Kraft said after the September 11 open house. The 1st district councilman, who represents Fells Point and voted to approve the Exelon project, added that he doesn’t expect everybody to be satisfied by the answers. 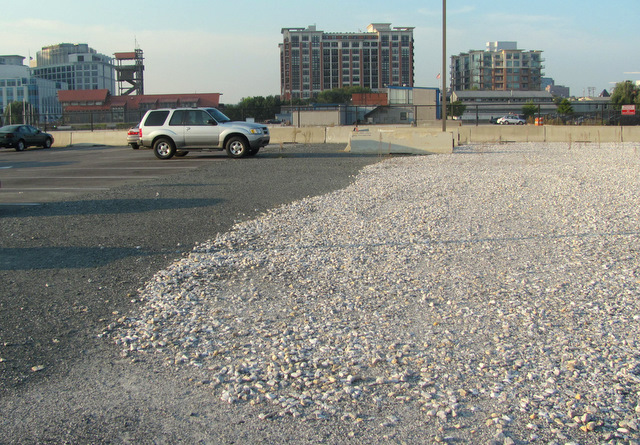 The surface portion of the cap consists of crushed gravel and clay, which doubles as parking for some Morgan Stanley employees. (Photo by Mark Reutter)

Stelios Spiliadis, owner of the Inn of the Black Olive that borders the site on Caroline Street, called the meeting “a sham” because, he said, it will be controlled by the Beatty Group and other “self-interested” parties.

“At the previous meeting they offered us cookies and lies but no chairs. The only difference with this meeting is that we’ll get to sit down in chairs,” he said today.

Spiliadis and about a dozen other Fells Point residents are demanding an independent assessment of the health risks at Harbor Point.

They point out that hexavalent chromium deposited at a similar waste dump in Jersey City, N.J., is being removed by Honeywell after high levels of the chemical were found in nearby residences and businesses.

News that Beatty plans to pierce the geomembrane cap containing the chromium with more than 1,000 steel and concrete pilings to build the Exelon Tower has stirred concern that the construction could release contaminants into the air.

The consent decree between Honeywell and the EPA-MDE calls for the close monitoring of the site to prevent any chemical releases into the air or groundwater.

The agencies are currently reviewing the “Detailed Development Plan” submitted by Mueser Rutledge, Beatty’s geotechnical engineers, to insure that construction will not increase “risks to health or the environment from the conditions at the site,” which is a legal requirement of the consent decree. 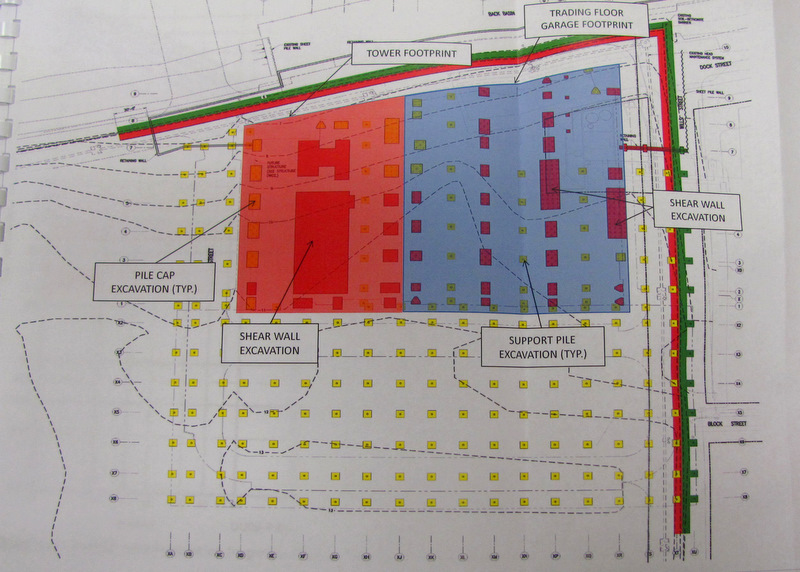 This diagram shows, in yellow and red, where more than 1,000 pilings are expected to be hammered through the cap for the foundation of the Exelon Tower and a central plaza. (“Detailed Development Plan,” Beatty Development Group)

Among the steps to be taken by the developer are a drainage net above the cap to collect and convey rainwater to the harbor and waterproof seals (also known as “boots”) fitted securely around the pilings.

The plan notes that up to 800-square-foot holes will be dug through the cap to secure the footings of the 23-story office tower and that the spoils from the excavations will be “direct loaded into sealed containers” and trucked offsite for disposal at unnamed locations.

A steady stream of trucks would enter and leave the site – and rumble through East Baltimore’s narrow streets – during several phases of construction.

In addition, the developer intends to install seven air monitoring stations on site, as well as three offsite stations at the Maryland Science Center, Baltimore Aquarium and Broadway Recreation Pier, to sample air quality during construction.

Elevated amounts of chromium detected at the stations will result in a planned response, including the temporary shutdown of construction, the developer promises.

EPA and MDE are in the process of reviewing the plans, which were submitted on August 1. The agencies expect to complete their review about a week before the October 7 meeting.

Bob Greaves, remedial project manager for the EPA Region 3, told The Brew that he does not believe the Harbor Point project presents any unique disposal problems or health risks despite its size and complexity. He said a joint EPA-MDE committee of experts is poring over the plans, and the Army Corps of Engineers was called in for assistance. 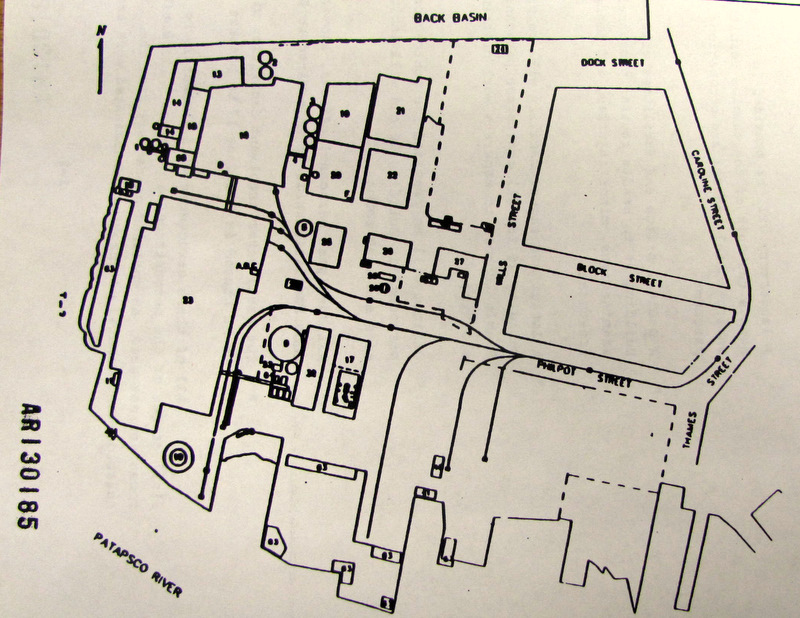 Diagram of the Allied Chemical plant on the western side of Fells Point. It was the biggest chromium processing factory in the world during its 1920s-50s heyday. It was shut down in 1985. (Maryland Department of the Environment)

One area to be closely reviewed by the group is how the weight of the Exelon Tower might affect the settlement of the subsurface soil and waste.

General subsistence does not typically result in excessive strains on a containment cap, and it may even improve its stability.

But differential settlement can produce excessive strains that result in breaks and tears in the cap.

Because the Harbor Point cap will be obscured by the pilings and the basement of the Exelon Tower, excessive caution must be exercised to make sure that the cap does not deteriorate over time, thereby letting the wastes seep up into the building or leak into the atmosphere.

The Harbor Point footprint intensified greatly after Exelon’s decision last year to locate its 656,000-square-foot regional headquarters at the site. Prior to that decision, the developer had asked for permission to build 1.8 million square feet of office, retail, hotel and apartment space.

In June, the city approved a bill calling for 3 million square feet of development, plus an additional 1,238,675 square feet for parking.

Earlier this month, the City Council approved a $107 million financing agreement, which Beatty said was essential to get the project underway. The bond money, to be paid out of future property tax revenues, means that the city effectively pays for Harbor Point’s roadways, sidewalks, parks and harborfront promenade.

FOR MORE BACKGROUND AND NEWS ON HARBOR POINT:
Harbor Point saga was tailor-made for Brew coverage