Pity poor Wal-Mart. The attempt by the world’s biggest retailer to win quick approval of its big-box store in North Baltimore was thwarted last week when a city design board criticized both the aesthetics and layout of the plan.

But don’t get too broken up. The retailer has ample political clout to roll past – or over – the objections of the Urban Design and Architecture Review Panel (UDARP) about the “Super Wal-Mart” proposed on West 25th Street in Remington.

With a corporate strategy to move aggressively into urban areas, Wal-Mart has the support of most big-city politicians, including Baltimore’s Mayor Stephanie Rawlings-Blake. The lure of jobs (if not well-paying ones) trumps any deficiencies in design.

So expect plans for more Wal-Marts elsewhere in the city. For some time, for example, the company has been eyeing the closed Pemco enamel factory, across from Johns Hopkins Bayview Medical Center, on Eastern Avenue.

And Wal-Mart is not alone. Next Tuesday (Oct. 8), Target plans the grand opening of its 135,000-square-foot store at The Shops at Canton Crossing.

The 31-acre site, on former industrial property along Boston Street, constitutes the largest retail development in the city in years and will include chain restaurants, national retailers and a Harris Teeter grocery store. Expect a slew of city and state politicians on hand, basking in the media limelight.

In Remington, residents and area shop owners – several of whom battled the retail giant in court and lost – have mostly reconciled themselves to the coming of Wal-Mart. They are now trying to wrest some concessions over green space, parking and the location of the truck loading ramps.

The only serious threat to Wal-Mart’s plans is the passage of local legislation that would raise the minimum wage currently set at $7.25 an hour in Maryland.

Earlier this month, Washington Mayor Vincent Gray vetoed a bill aimed establishing a wage floor for mega-retailers operating in the District. Wal-Mart said it would not locate new stores in Washington if the bill, requiring $12.50 an hour in combined wages and benefits, passed. Gray cited the loss of jobs for his veto.

In 2010, a living wage bill before the Baltimore City Council was soundly defeated by Wal-Mart financed and allied business groups. Councilwoman Mary Pat Clarke remains the lone champion of the legislation, without support from fellow Council members or Mayor Rawlings-Blake.

What Wal-Mart sought last Thursday was UDARP’s sign-off of what was described as a “minor” amendment to the Planned Urban Development (PUD) approved by the City Council for the 25th Street Station project in November 2010. 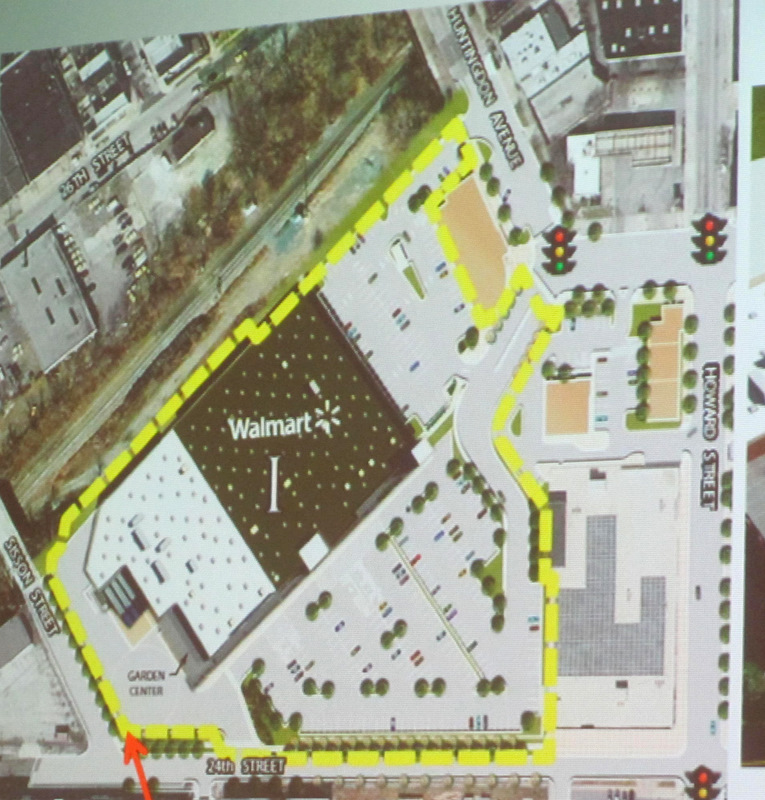 Yellow dotted line shows the land that Wal-Mart wants to buy for its Superstore. (Wal-Mart presentation to UDARP)

The retailer disclosed that it planned to reach an agreement with developer Rick Walker to purchase 7.2 acres of the site west of Howard Street, leaving Walker’s WV Urban Development group to stake out the square block to the east (to Maryland Avenue and 25th) for proposed townhouses and specialty shops.

Judith Kunst, president of the Greater Remington Improvement Association, said she didn’t receive the new plans until shortly before the meeting began.

Among the changes in the new plan: the size of the store would increase from 94,000 to 104,000 square feet (with inclusion of a new garden section), the loading dock would be accessed by trucks on 24th Street instead of Huntingdon Avenue (thereby bordering a block of residential houses instead of CSX rail tracks), and a parking garage would be replaced by surface parking.

Overall, the footprint of the development would shrink by more than 100,000 square feet because the main building would not include a Lowe’s Home Improvement Store.

Design Described as “Fake” and “Bleak”

When Condatore interjected that the windowless brick walls flanking the store’s entrance were meant to reflect and celebrate the historic Baltimore rowhouse, Bowden dismissed the effort as “fake” and “an artificial gesture.”

“You went backwards on the building,” he chided a downcast-looking Condatore, citing a previous design where Wal-Mart was going to share the building with Lowe’s.

When the City Council approved the PUD in 2010, Walker promised an “environmentally sound and sensitive project,” including “one of the largest regulatory green roofs in the region.” 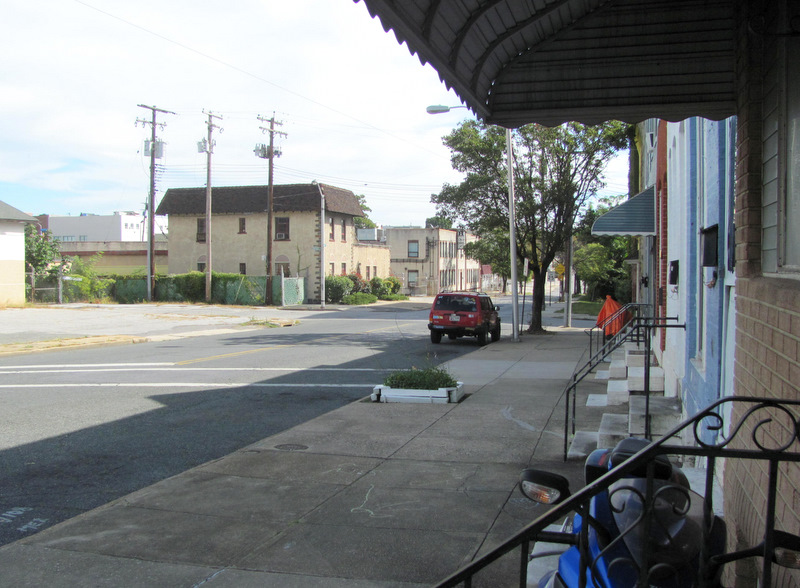 (Above) 24th Street today and (below) the wall separating the street from Wal-Mart’s truck turnaround. (Mark Reutter and Wal-Mart) 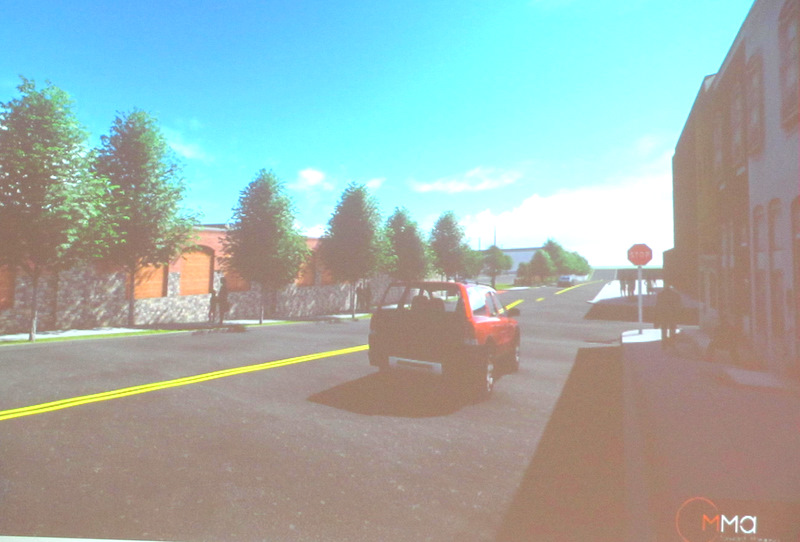 The roof over the rejiggered Wal-Mart building was still described as “green” by Condatore, but nobody was buying it.

UDARP panelist David Haresign castigated the design for lacking relief from the asphalt paving, “gigantic” parking lot and blank walls, while Thomas Stosur, the normally mild-manned chief of the planning department, simply said: “I’m overpowered by the amount of brick.”

Residents from the Remington and Old Goucher communities weren’t much happier.

“This could have been plucked out of any suburban shopping mall in the country,” Bruce Willen of the Old Goucher Business Alliance, complained. He emphasized that the store is located a residential area, but the plan was “very hostile to pedestrians.”

Those driving to the store will be asked to take a “designated” route – north on Howard Street and south on Maryland Avenue – and to use the North Avenue ramps to enter and exit from the Jones Falls Expressway. Several residents called this wishful thinking.

The Fawcett community, located south of 24th Street, could be severely impacted by the influx of cars and delivery trucks, community representative and resident Megan Hamilton said.

Joan Floyd, president of the Remington Neighborhood Alliance, called on the city to preserve the truck loading dock originally approved near Huntington Avenue. Several speakers criticized the disappearance of an entrance on 24th Street closer to Howard Street.

To the surprise of the petitioner, UDARP refused to rubber stamp the plans and called on Wal-Mart to resubmit its building designs and parking layout at a future meeting. Panelist Bowden went so far as to suggest that the retailer  might be served better by a new site plan.”

Based on past actions, however, UDARP is likely to relent on any major reworking of the Remington proposal. Last year, for example, the panel was highly critical of CBAC Gaming’s massive parking garage at the Horseshoe Casino, only to approve a more streamlined garage on Warner Street a few months later.

Wal-Mart can also take heart that it won approval from the same design panel for its only other store in Baltimore at Port Covington.

Compared to that dreary fake-stone edifice at the dead end of a remote parking lot, Wal-Mart’s take on the historic Baltimore rowhouse looks almost sophisticated. 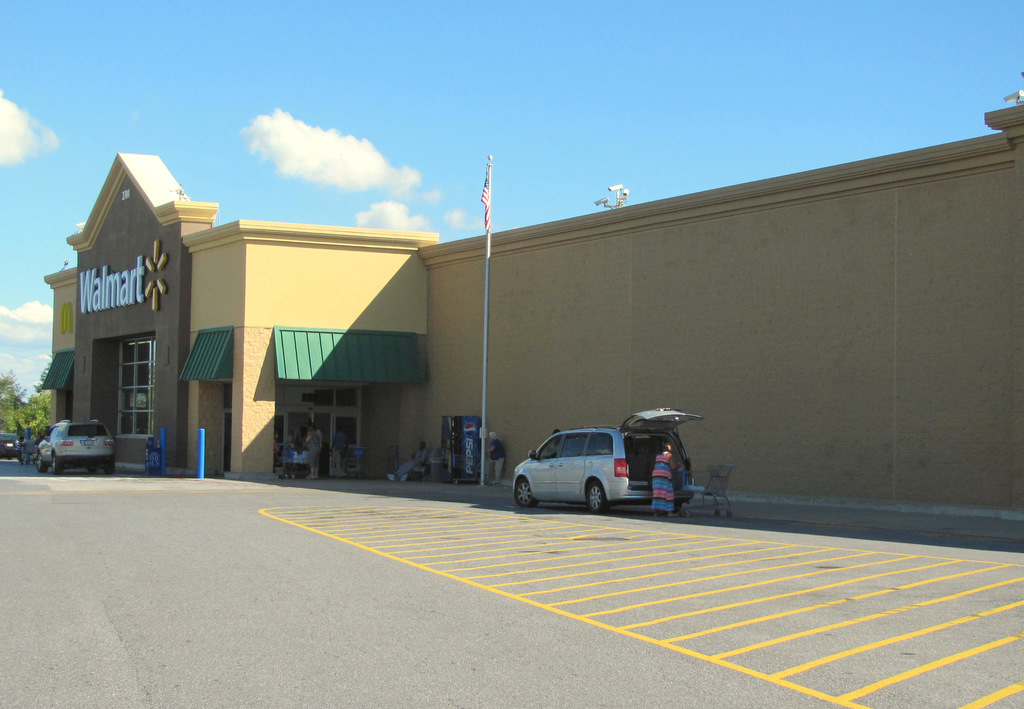 Wal-Mart’s only store in Baltimore is isolated at the foot of Port Covington in South Baltimore. (Photo by Mark Reutter)