Remington residents blasted the new design for a Wal-Mart store off of 25th Street, saying it has “changed dramatically” since its original approval in 2010, becoming a suburban-style big box store with a street layout that is not pedestrian-friendly.

“Wal-Mart, this is ugly! This is completely inconsiderate of our neighborhood!” said Kelly Cross, who lives at 23rd Street and Maryland Avenue.

Before a gathering of more than 100 residents last night, Willen and Philip Lacombe showed before-and-after design drawings of the 25 Street Station project and a video animation of a more urban-style Wal-Mart being built in Northwest D.C.

“That? Compared to this!?” said Dana Peters Moore, a Charles Village resident, after watching the video showing the Wal-Mart on Georgia Avenue with “green” water features, tree-lined sidewalks, bike racks, bus shelters and less asphalt. “It feels like you’re playing us cheap!” 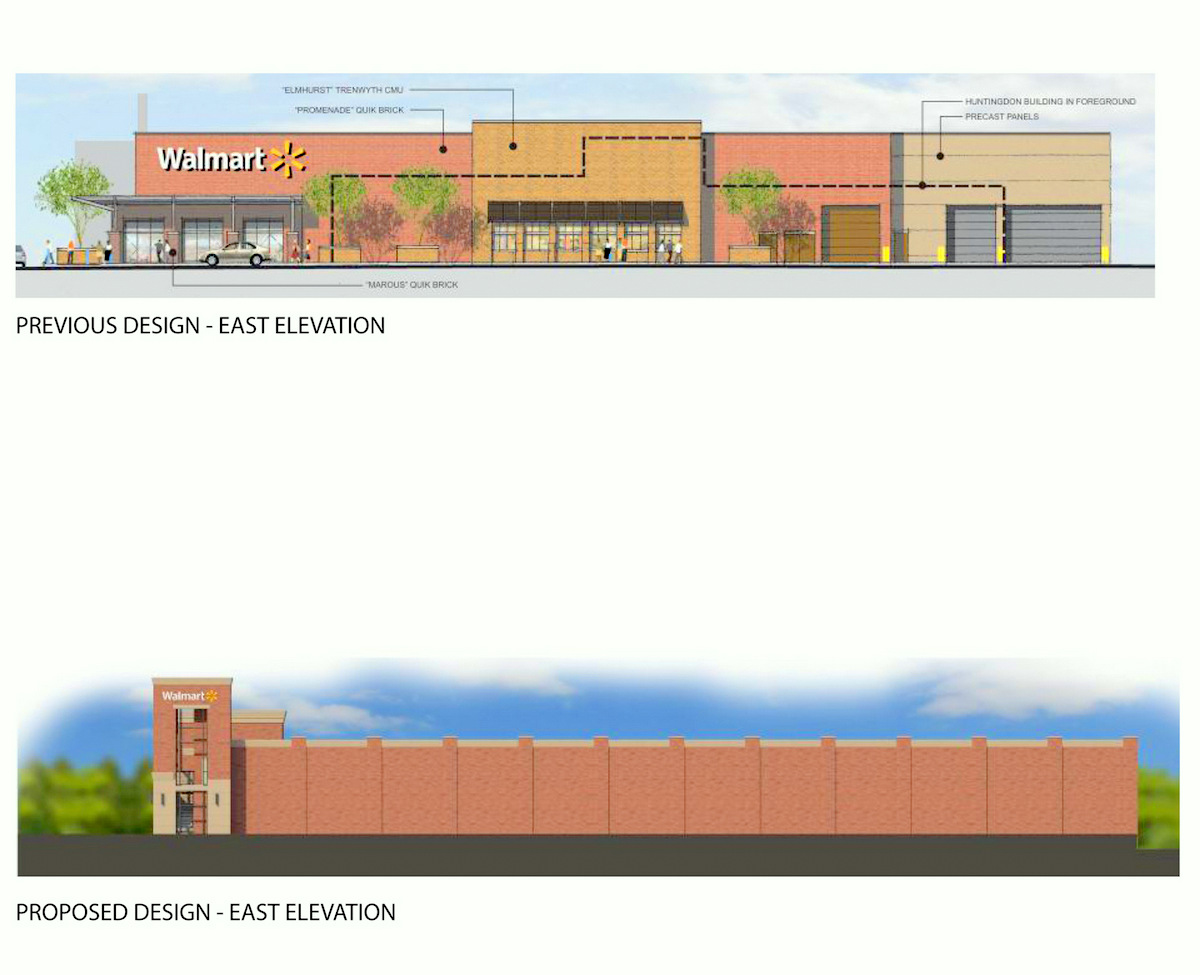 The previous (above) and current (below) design of the east side of the Remington Wal-Mart. Source: architects PDFs

There were no Wal-Mart executives present at the meeting held in the basement of Saints Phillip and James Church on Charles Street.

But the company’s architect, Dan Condatore listened to the residents’ angry critique. What put Condatore more on the spot was an irony Willen pointed out – the urban-style Wal-Mart in the video that drew appreciative “ooh’s” and “aah’s” from the crowd had been designed by his firm.

“It’s driven more, not by site design but by economics. . . by what they [Wal-Mart] will spend,” Condatore said, looking glumly at the crowd. “We’ll go back to our client.”

City officials kicked off the two-hour meeting by laying out ground rules for the public process and what looks like a pre-set clock ticking toward final approval.

Councilman Carl Stokes warned the audience not to question the project as a whole. Because of the Council’s 2010 vote approving the site as a Planned Unit Development (PUD), Stokes said, “It’s not on the table per se tonight.”

Then Laurie Feinberg, assistant director of the planning department, addressed the question of whether the changes are great enough to be considered as a “major amendment” to the PUD – a lengthier process requiring Planning Commission and, ultimately, City Council approval.

She said the city’s Site Plan Review Committee will review the project again next week. Stokes has tentatively scheduled another community meeting for October 24. The Planning Commission will likely vote on it at one of their two November meetings, Feinberg said.

Who has final say on the matter? The Planning Commission, Feinberg replied. Can it be appealed, someone else asked. “No,” said Feinberg.

Another entity involved is the Urban Design and Architecture Review Panel, (UDARP), which panned the new design as “bleak” at its September 26 meeting.

Feinberg told the crowd that UDARP operates “on contract” and serves only in an advisory role to Thomas Stosur, director of planning (who also criticized the design at the last UDARP meeting.)

Many community members took issue with Feinberg’s assertions and said the project had changed significantly, qualifying it as a major amendment.

Originally planned as two-story combined Wal-Mart and Lowe’s – with additional small retail and residential units and a three-story parking deck – the project has re-emerged as just a Wal-Mart, a change that more than halved the total retail space. The parking structure has been dropped and replaced with a surface parking lot. 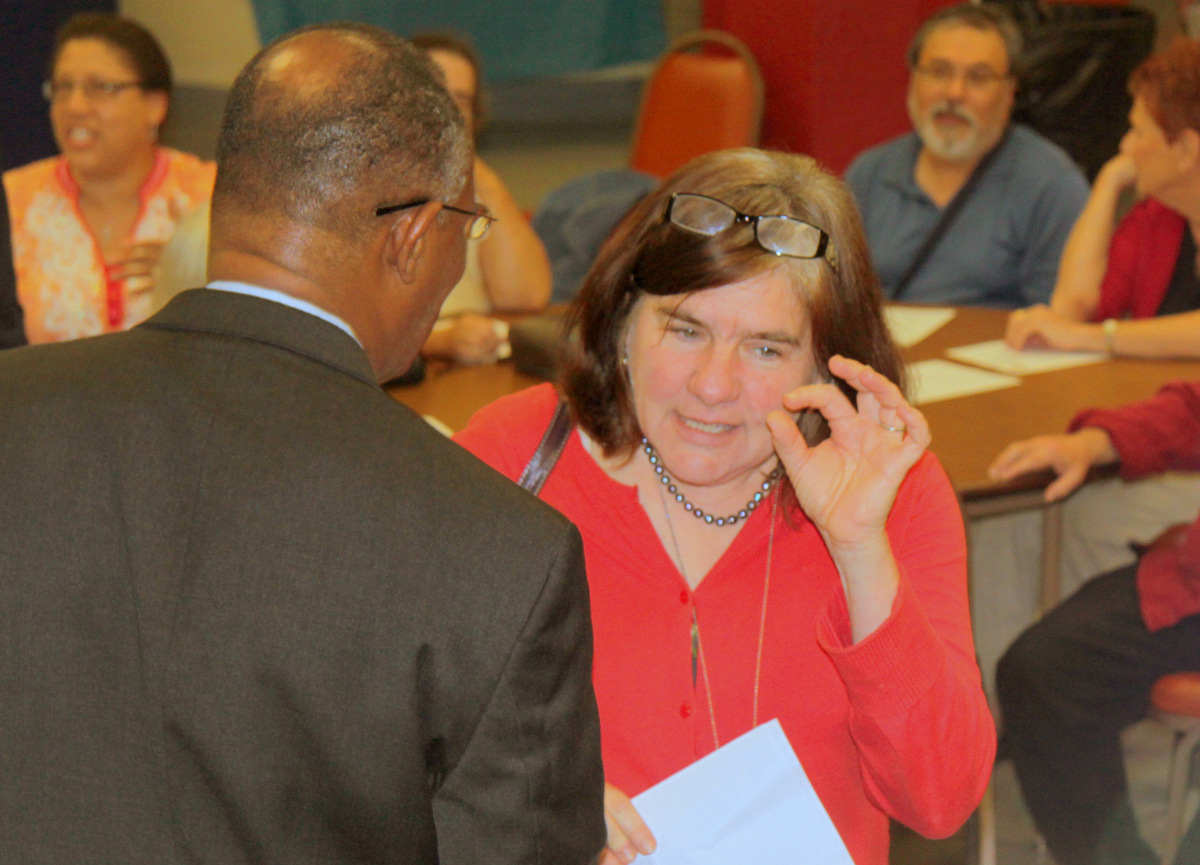 “It’s extremely different,” Willen said, pointing to the large swath of brick on the facade that faces a residential block. He and other speakers had a number of suggested changes to the configuration of entrances to the project, which they said had been better for the neighborhood in the original plan.

The Remington Neighborhood Alliance (RNA) has proposed four specific changes, including channeling traffic away from residential 24th Street and onto Sisson Street.

“That is only a small roadbed away from somebody’s house,” said the RNA’s John Viles, pointing to the path of truck traffic on 24th Street. Old Goucher also has a critique of the new design.

Both Old Goucher and the RNA called the new site plan a major amendment and floated alternative layouts. “This should be an opportunity to do something great,” Willen said.

Sharon Guida, who chairs the land use committee of the Charles Village Civic Association, said the group is seeking input from members in advance of a board vote.

Greater Remington Improvement Association President Judith Kunst said she had been informed about the meeting late and was not prepared to make a statement on the issue.  No one from the Historic Fawcett community addressed the meeting. 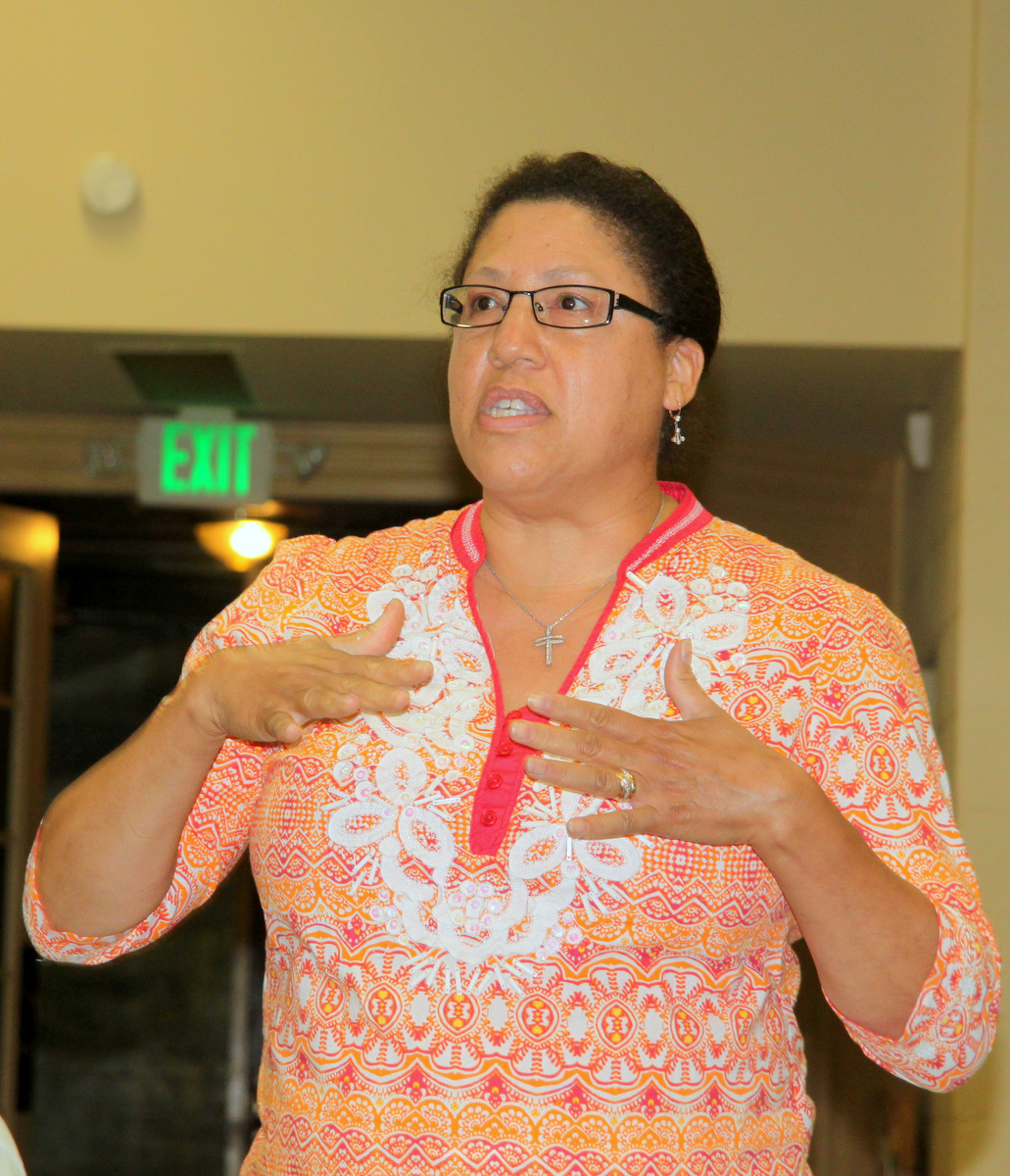 Dana Moore: “You said you wanted to do something creative and innovative? That’s not it.” (Photo by Fern Shen)

As for Stokes, asked before the meeting whether he considers the changes a major amendment to the original PUD, he said he was waiting to hear from community leaders.

Later, after Councilwoman Mary Part Clarke joined the meeting, Stokes said “there has to be a stronger consideration” for community input, and added that the two of them “will come out for a major amendment,” if necessary.

“We appreciate the community’s involvement in this process and look forward to presenting changes at Thursday’s UDARP meeting that respond to both the community’s and the Urban Design and Review Panel’s input.  This project represents a great opportunity to create jobs and help people save money and live better with convenient access to essential products such as fresh produce and affordable pharmacy items.  We look forward to continuing to work with WV Urban and the communities surrounding the project as we seek to finalize the planning and approval process and get construction on the store underway.”