Before the Baltimore City Council voted unanimously last night to table a sweeping panhandling ban backed by downtown business groups – and at one point endorsed by some city officials – strong opposition to it was on display outside and inside City Hall.

Chanting “Homes not Handcuffs” and “Stop Criminalizing Poverty,” about 15 advocates for people experiencing homelessness in Baltimore (organized by the group Housing Our Neighbors) protested outside the building.

Inside City Hall, the advocates even had a place in the media gallery. “I got into the press box!” crowed recently-credentialed writer Bonnie Lane from Word on the Street (WOTS), the local newspaper focusing on homelessness.

Standing along with network affiliate television crews beside the dais, Lane watched as advocates unfurled a banner from the balcony and protester Tony Simmons (a fellow WOTS staffer and resident counselor who lives at the city shelter) spoke loudly from his seat condemning the bill.

“City Council, stop calling this a bill! This is a warning that we are no longer welcome in Baltimore!” Simmons shouted.

He was escorted from the packed Council chamber by police.

Offering a gentler, but still-pointed, reproof, the invocation at the beginning of the proceedings even referenced City Council bill 13-0186.

“Let us remember the panhandler and those who have been displaced,” intoned the Reverend William Chaney, West Baltimore United Methodist Church.

Councilwoman Rochelle “Rikki” Spector, the bill’s sponsor, has said legislation is needed to safeguard panhandlers and the public. The Downtown Partnership, the non-profit group which represents business owners and other downtown stakeholders, has said the sight of street people asking for a handout on roadsides and near restaurants and other attractions is hurting city tourism.

But at Spector’s request last night the council delayed consideration of the bill until their next meeting, on Nov. 18. Asked later why she made the request, she said “the amendments introduced by the Downtown Partnership aren’t ready to go.”

She was referring to amendments they drafted broadening the bill  to bar soliciting within 10 feet of anyone paying for goods and services with cash or credit cards. 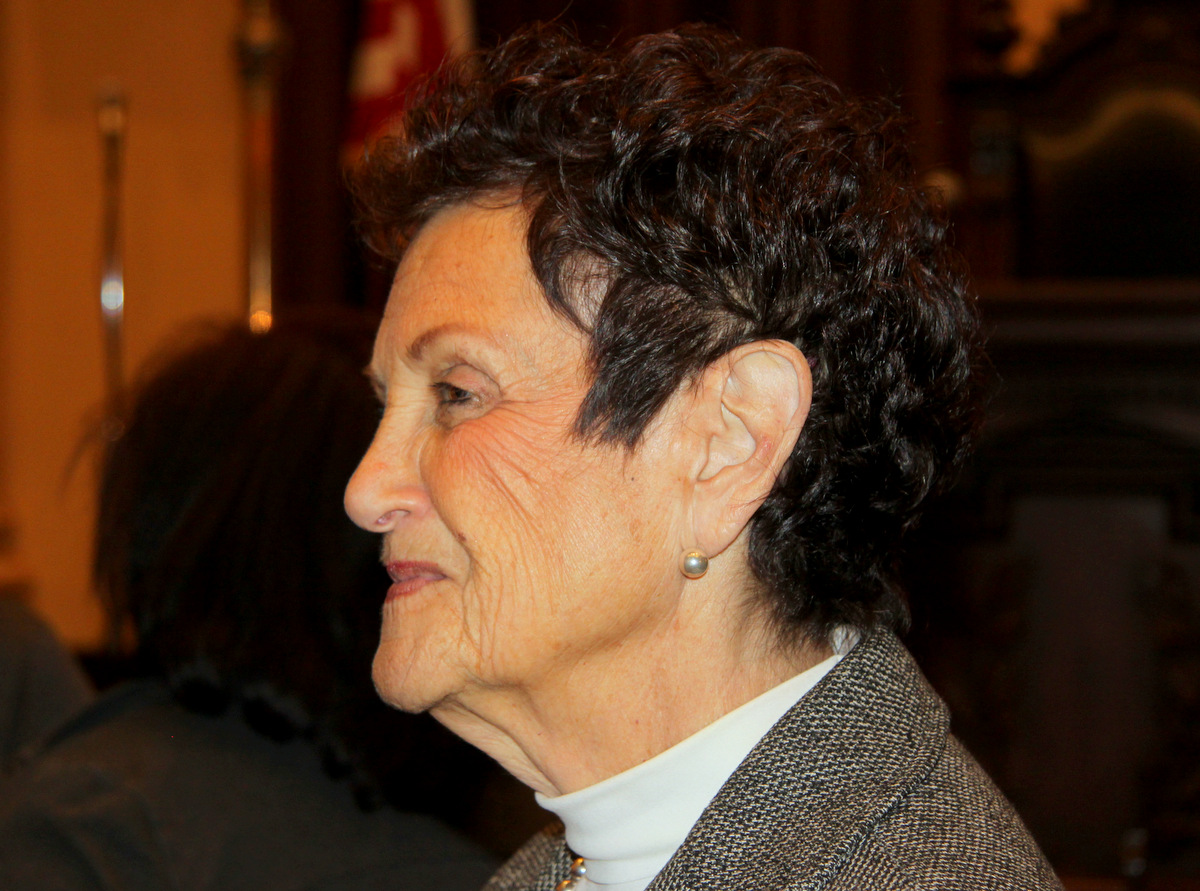 Councwoman Rochelle “Rikki” Spector asked for the bill to be held over for two weeks. (Photo by Fern Shen)

“People said the way it was written it would cover the whole city – and it’s true,” Spector said.

Now the bill is being re-worked to ban soliciting within 10 feet of outdoor dining and within five feet of a parking meter or kiosk. Panhandling would also be illegal on pedestrian bridges and at the entrance to stairwells. Spector said “the whole thing is being reviewed” by the staff and lawyers.

Legal questions aside, Councilman Robert W. Curran had a more practical explanation for why the bill was tabled.

In its current form, “It doesn’t have the votes!” said Curran, as he exited the chamber.

Talk of a scaled-back bill didn’t impress David Rocah,  senior staff attorney for the American Civil Liberties Union of Maryland who has already decried the ban. Removing the measure’s broadest provision “doesn’t make the other ones constitutional,” he said.

In a letter to the Council signed also by Antonia K. Fasanelli, of the Homeless Persons Representation Project, Rocah noted that the U.S. Court of Appeals for the 9th Circuit “held the exact same provisions to violate the First Amendment,” he said. In that case, as with the Baltimore legislation, “they are relying on this ‘captive audience’ argument that doesn’t hold up.”

(The city’s own attorneys, he added, have said the measure has significant constitutional flaws.)

Unless the city were to impose a “truly draconian and clearly unconstitutional” ban on begging, no state effort to regulate it could be effective, Rocah said, “there are unfortunately too many poor and desperate people in Baltimore who need to rely on begging to get by.”

He urged the city to reject “this mean-spirited and deeply misguided legislation, and channel its efforts to more productive solutions.”

Other signs the Council was going to have to pull back were building in recent weeks. An Oct. 24th memo from the city’s homeless services program director, Kate Briddell, reversed her previous position in support of the measure.

“The amended version of the bill changes the intent of the original Bill – increased safety – and further marginalizes the population we are designed to serve,” Briddell wrote.

That was the point the protesters sought to make last night, during their demonstration outside City Hall.

“They’re just trying to criminalize the homeless and keep the homeless away from the Inner Harbor – they want us not to be seen,” said Simmons.

He said the poor people who end up at the shelter, “quite a few of whom work,” need help in the form of affordable housing and better paying jobs.

“With so many jobs paying like $7.25 an hour, and with the average two-bedroom apartment in Baltimore at, like $1,250 a month, what do you expect?” he said, adding that the bill “will hurt, not help.”

“Once we start getting ticketed and arrested, it’s going to make it harder for us to get jobs.” 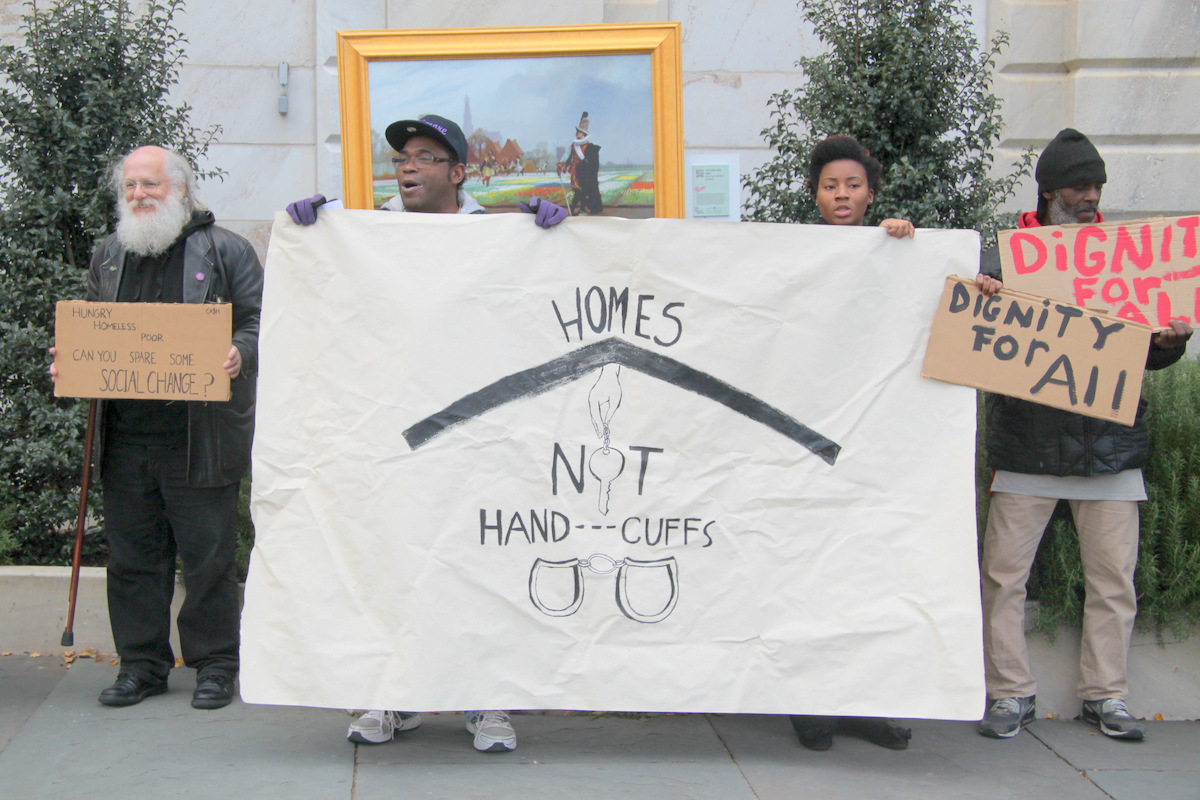 Part of a group of about 15 people who came to protest Baltimore’s proposed panhandling ban. (Photo by Fern Shen) 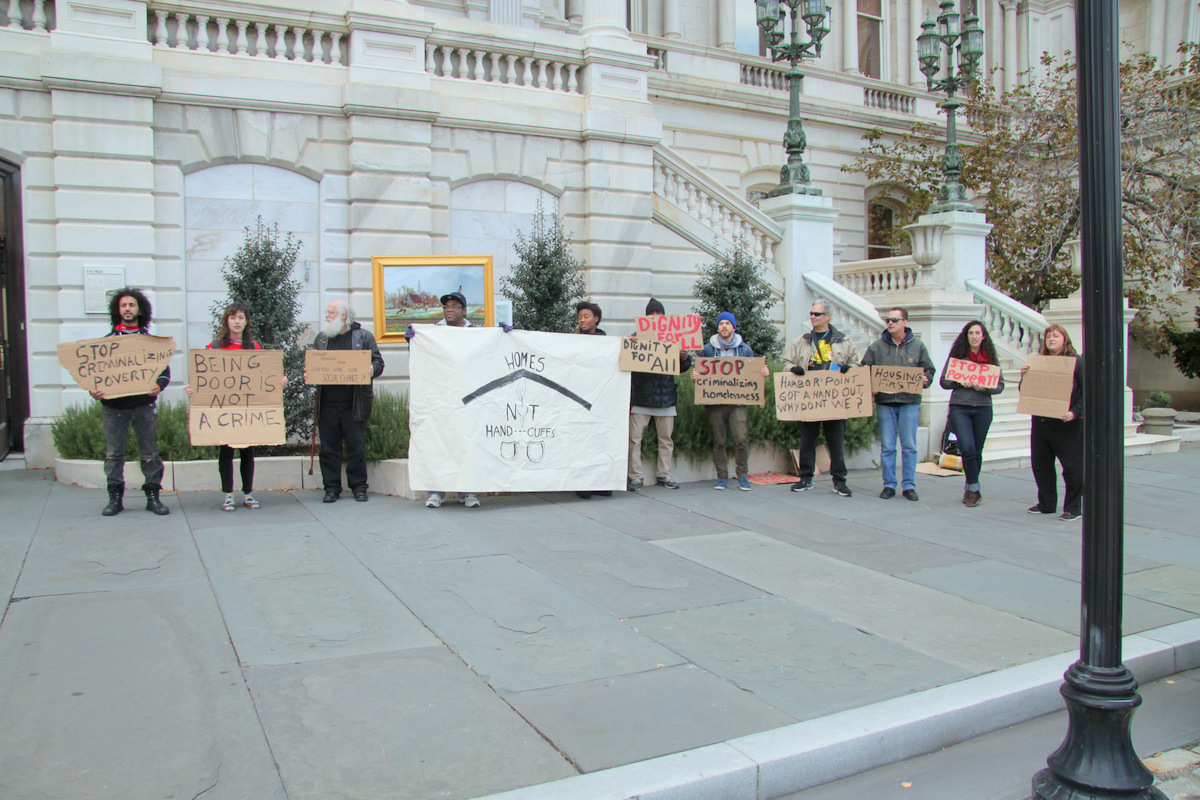