Driving or biking around town, we brake for natural and man-made phenomena.

The Brew tries to keep a trusty camera close-at-hand, and so do our readers – they kindly send us photos from their neighborhoods or throw crazy footage up on YouTube.

Teresa Asereta emailed us the shot shown above of the sun setting last November with the notation, “Mysterious double streaks in the cloud patterns.”

A less savory image – of pumpkin-orange effluent staining the Jones Falls at Woodberrry – caught the eye of Teresa Duggan.

Still another reader was irked about the water burbling up from a spot along Key Highway in South Baltimore.

He’d seen it day after day on his drives to-and-from work, never with any city workers around. A fellow reader responded to our call and shot a picture of that situation. 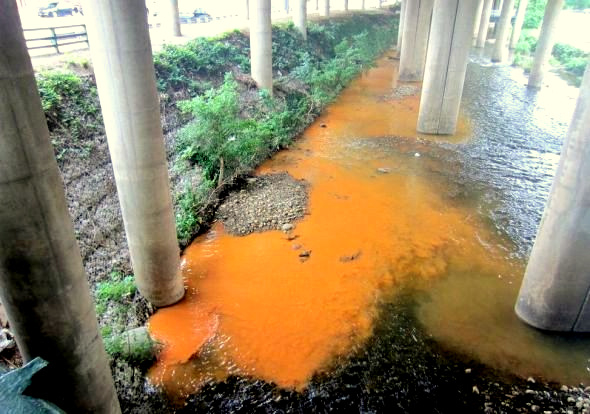 Last July 2, Teresa Duggan saw something very orange flowing out of the pipe just southeast of the Union Avenue bridge over the Jones Falls.

Other images we published in 2013:

In short, we encountered many disturbing signs of dilapidated infrastructure and, after getting some photos, zipped back to the office with plenty of questions for city officials. Was the city aware of the problem? What were they doing about it?

Their answers came back and crews (generally) arrived on the scene, but the chronic nature of these breaks and overflows reinforced our bigger questions about the state of Baltimore’s infrastructure.

Why does this keep happening? Are the tens of millions of dollars diverted yearly to deal with immediate infrastructure crises wisely spent? 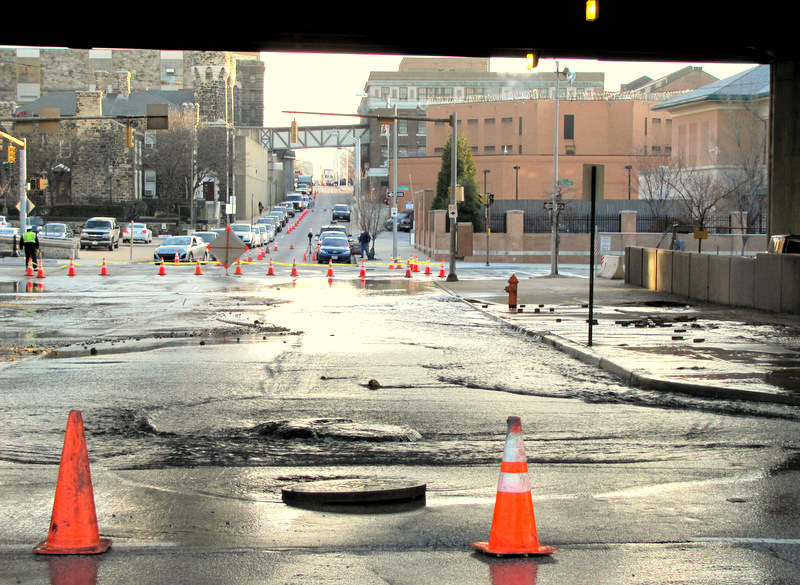 Under the Jones Falls Expressway, water gushes from a broken main on Madison Street. (Photo by Mark Reutter)

Below Us, Crumbling Sewers

The poor condition of the city’s sanitary system has been known for decades; a 2002 federal consent decree was supposed to put the city on a path to repairing it in order to keep raw sewage flowing into the harbor (and the Chesapeake Bay).

But after more than a decade, as the environmental watchdog group, Blue Water Baltimore noted this year in a legal filing, there is still “ongoing egregious sewage contamination.” They asked to be a party to the consent decree, a move the city has resisted. 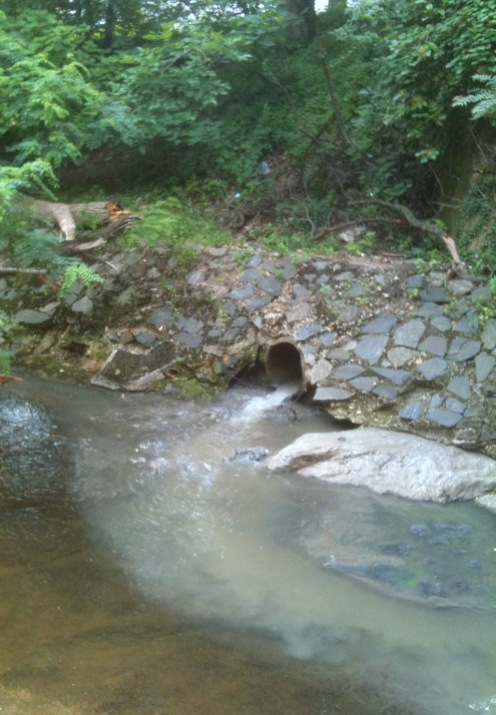 The city’s response to its critics is that it has spent $500 million so far and is (more or less) on track to come into compliance with the terms of the agreement.

But as The Brew was first to report, they also propose to extend the deadline for fixing the sewage lines from 2016 to 2019.

And the city is asking the Environmental Protection Agency (EPA) to change the model by which the new sewers will be built to incorporate a less “over-designed” system, according to our May 30 story quoting the water bureau chief .

No surprise that Blue Water wants a seat at the consent decree table.

Above Us, Breathtaking Sky

So, yes, our spur-of-the-moment photo-journalism informs all kinds of hard news stories. (Mark Reutter last October ran into some folks cultivating Swiss chard near Franklin Square and came away with some telling photos for our piece on the city’s draft Urban Agriculture Policy.)

But fairly often, thank goodness, we find great photos (e.g., the Male/Female statue) with no policy-wonk edge or dark side.

Like that crisp day in November when the dome of blue sky over Baltimore was just crackling from horizon to horizon with cirrocumulus clouds. The whole Brew family discovered later they’d been staring at it slack-jawed for long minutes. Later, via email and on Facebook, we compared notes and traded photos. 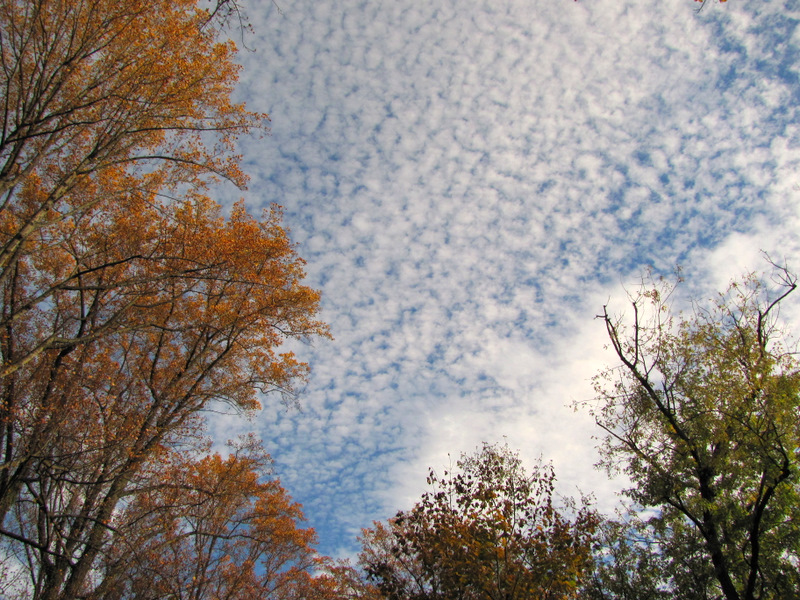 Gazing at the cirrocumulus “mackerel sky” above Mt. Washington. (Photo by Mark Reutter)

We learned that such a fish-scale cloud cover is sometimes called a “mackerel sky.” The whole thing inspired The Brew’s unofficial poet laureate, Usha Nellore, to write a great poem – and she hadn’t even seen the sky that day.

Here are links to our trove of stories in 2013 about the environment, infrastructure and natural beauty of this city:

The city is asking the EPA to change the model by which the city’s new sewers will be built to incorporate a less “overdesigned” system, according to Rudolph S. Chow, chief of the water bureau. At the same time, the city wants to extend the deadline of the consent decree from 2016 to 2019 for Phase 1, Chow said, with additional time for a yet-to-be determined Phase 2.

Duggan’s been keeping her eye on the spot because it’s not the first time she’s noticed the water looking bad there.She sent us some photos from July 2 that are even more alarming – with the water around the pipe stained in an “sickly orange-brown,” as she put it. “The effluent was going strong at 8:20 a.m. and I took a photo. And it was still the same when I returned at 5 p.m. that day,” Duggan wrote.

It was a full-throated mackerel sky, famous in legend for its purity and relative rarity. Row after row of small, high, rounded puffs of white set against a backdrop of lustrous blue. . . Such a sky is a sign of winter and indicates fair but colder weather coming. “Mackerel in the sky, three days dry,” goes the saying.

Watergazers on a picture-perfect day

Herman Melville maybe told it best: “Circumambulate the city of a dreamy Sabbath afternoon,” he wrote in his legendary sea-saga Moby Dick. “Go from Corlears Hook to Coenties Slip, and from thence, by Whitehall, northward. What do you see? Posted like silent sentinels all around the town, stand thousands upon thousands of mortal men fixed in ocean reveries.”

Change the venue from Manhattan to Baltimore and move time forward by 160 years or so, and there you have it: three men pulled to the Canton waterfront on this Sabbath afternoon like metal filings to a magnet. 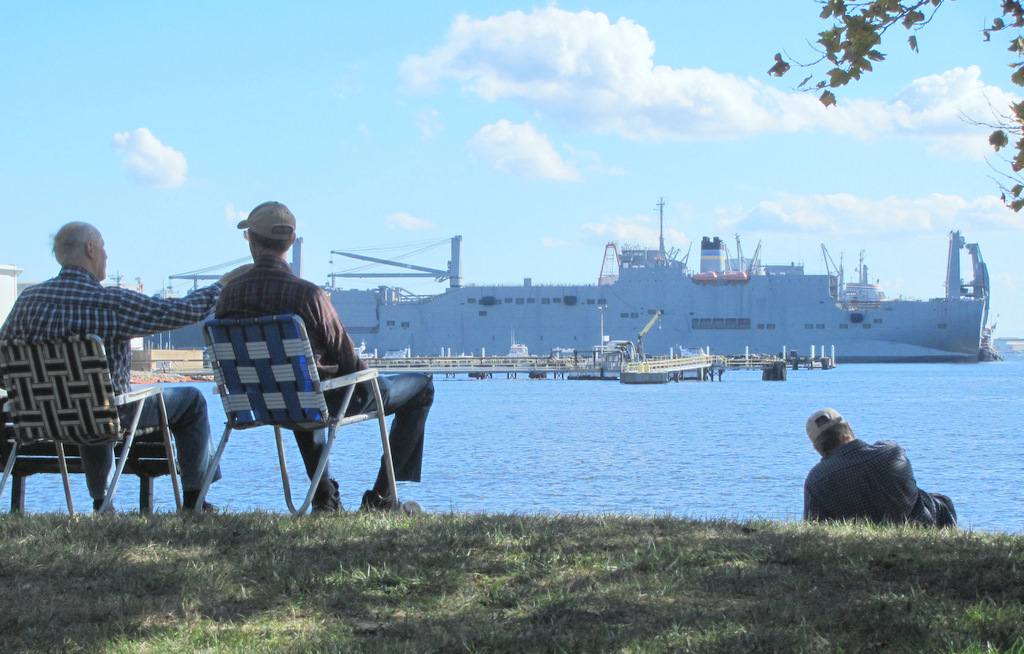 Sun and breeze and lapping waters on a Sunday afternoon in Canton. (Photo by Mark Reutter)

A sewage overflow – first reported on Sunday (May 26) at 7 p.m. but not stopped until 9:30 a.m. on Monday – sent approximately 21,775 gallons of sewage into the Jones Falls, according to the Department of Public Works. The sanitary sewer overflow “was caused by buildup of grease in a sewer main in the 4700 block of Falls Road” and was “stopped by the use of a pressure jet,” according to a press release emailed late yesterday.

My close encounter with a Baltimore water pipe

Jagged mounds of metal protruded from all sides of the pipe’s interior. Liver red and gooey brown, with purple highlights and dirty yellow streaks. It made me think of those angiogram images of the sclerotic arteries of people on the verge of a fatal heart attack.

This is “tuberculation,” the formation of corrosion on the inside of cast-iron pipes that’s been a known hazard in old water systems since the 1950s, when scientists at the University of Illinois exploded the myth that cast iron doesn’t easily corrode. 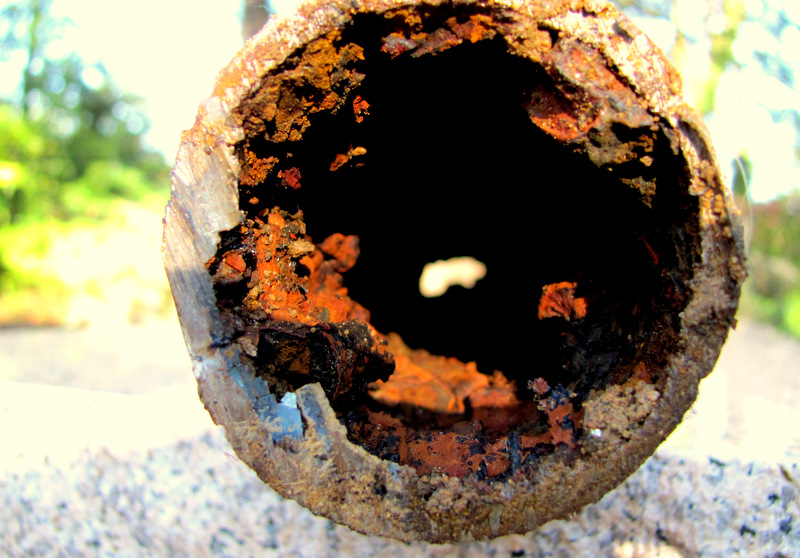 Up from the deep: Cross-section of a water main dug up near my house. (Photo by Mark Reutter)

Last night’s break caused pressurized water to spurt out of manholes and cracked pavement and quickly filled Madison Street with up to three feet of water, according to an eyewitness interviewed by The Brew.

“We asked the students in one class how many had asthma and everyone’s hand went up!” said Destiny Watford, 18, a Towson University student who lives in the community, where rowhouses are just blocks away from heavy industry.

The Department of Public Works said replacement of the 30-inch cast-iron main running underneath Madison Street – which a supervisor told The Brew was originally installed in 1861 (“That’s the year Lincoln became president and the Civil War started!”) – is considered a high priority and is already in design. Construction of a new main, running about one mile from the JFX to Martin Luther King Jr. Blvd., is scheduled to begin in 2016. 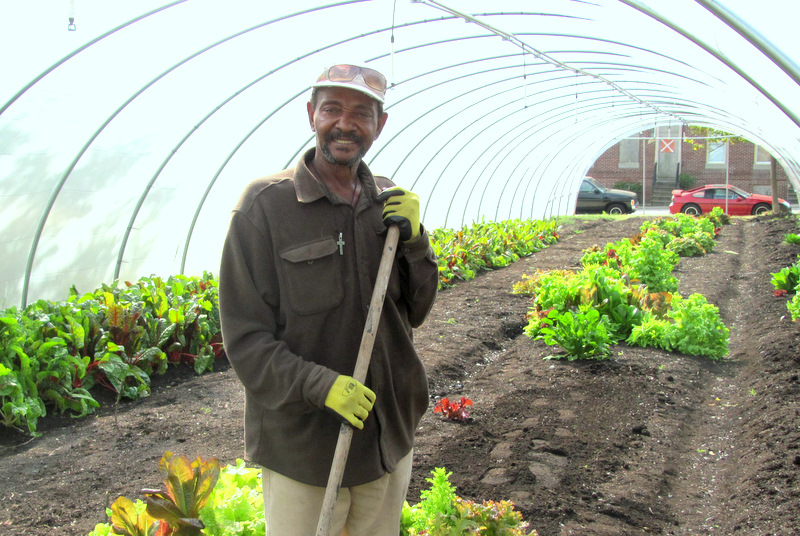 Those already familiar with the local ecosystem of food producers and distributors will be interested in the suggested strategies to support urban agriculture and solve some of the problems that have arisen.

One recommendation, for instance, is to strengthen the tenure of the Adopt-a-Lot program through which residents get leases to farm city land. Currently, the city has the right to give notice and terminate a lease in 30 days. The draft plan proposes to guarantee that the land could be farmed for the full time period specified on the lease.

They also recommend more approvals “where appropriate,” of  direct land purchasing  and streamlining the process for adopted lots to be considered for Community Managed Open Space status – and thus be removed from the Vacants to Value “For Sale” list.