With the stroke of a pen tomorrow, the turnaround of a historic city community will officially be set into motion.

That’s the center of a plan by the newly formed Mt. Royal Community Development Corp. as its top officials shepherd the settlement of a restored 150-year-old rowhouse in the 2400 block of Madison Avenue.

Once a blighted eyesore, the four-bedroom, four-bath dwelling was bought out of foreclosure by the community group for $70,000 and will sell tomorrow for $417,000.

It will be one of five rehabs the CDC hopes to restore and resell this year, said President Dale Terrill, as it works to establish new mojo in the city’s northwest core defined by grand Victorian homes, Druid Hill Lake and busy North and Mt. Royal avenues.

With millions of dollars in new development expected to break ground over the next decade in Mt. Royal, Reservoir Hill, Bolton Hill, Druid Hill and Marble Hill, residents and advocates say they hope the nonprofit CDC will be a way to steer the area’s own destiny.

Once among the city’s most prestigious addresses, sporting stylish rowhouses on Eutaw Place and Park Avenue, the area – especially north of North Avenue – has struggled for years with crime, deteriorated housing and a paucity of retail outlets, restaurants and other amenities. 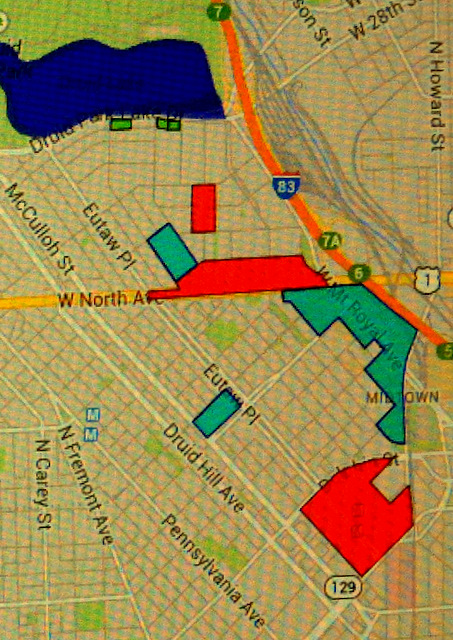 “The basic overview is to try to market, plan and develop the entire Mt. Royal district – it is a name that has kind of fallen out of popularity and we’re trying to revive it. It’s inexcusable that this area has declined as it has,” Terrill said.

“What we are talking about is what we can do to make this the place what it deserves to be. This is not a national marketing study, an enforced plan or outside consulting plan. It is very much from the ground up.”

The CDC has a 13-member board and was formed in late December. Since then, it has reached out to residents and local businesses with a personal appeal, with mentorship from other city community groups like the Greater Homeland Community Association and the Central Baltimore Partnership.

The group is seeking contributions through memberships. On April 25, it will hold an evening street fair at the St. Francis Neighborhood Center at Linden Avenue and Whitelock Street to raise community awareness.

Using social media, the CDC also hopes to keep a growing Listserv of 600 residents and businesses plugged into nagging concerns the community faces such as development and quality of life issues.

Veteran neighborhood ace Mark Tough has started working with the CDC. He has served as executive director of the former Neighborhoods of Greater Lauraville group and the Patterson Park CDC.

The CDC is meeting with a local bank to attempt to line up new financing options and is using its own focus on residential development to help drive the message, Terrill said.

“It started with a group of people who lived in the Reservoir Hill neighborhood and we realized that we had so much talent and capability. We wanted to know what is it that we can try to do to try to make a diff?” he said.

“We were kind of out to prove that this neighborhood is worth investing in and that you can do quality investment and get a return, it has to be done in a certain way.”

The Madison Avenue property, he said, was a perfect place to start. 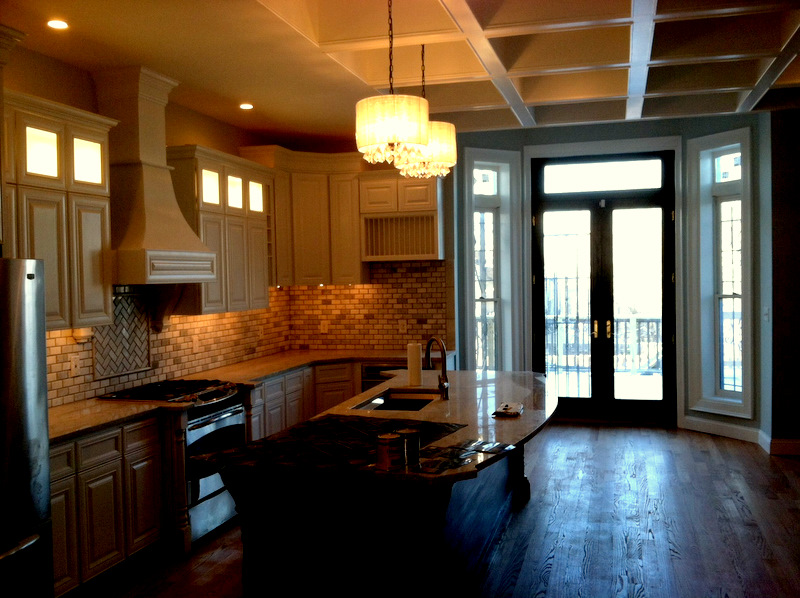 The kitchen of a Civil War rowhouse restored by the Mt. Royal CDC in Reservoir Hill. (Photo by Mark Reutter)

The property was built in 1864 and has a dramatic entry, a grand stairway and a light well, a unique Baltimore rowhouse feature that is a column built into the middle of the home capped by a glass dome on the roof to let in light.

Terrill, a three-year Reservoir Hill resident who describes himself as a wayward historic preservation buff who hails from Ft. Worth, Texas, said he personally guided much of the preservation work in the rowhouse.

“The property is a combination of historic and modern amenities,” he said. “A lot of people have come into this area, bought houses, gutted them and started over and it often looks like an Owings Mills townhouse. It’s very bland. That doesn’t seem to sell around here. On the flip side, nobody wants to live in a home where the bathrooms don’t work. So we try to put both together a high-quality product that would reflect what a high-quality version of these houses when they were first built.”

Lauren Haney, who will buy the house with her husband Graham Provost, said she is looking forward to moving into the community from Parkville.

“I’m from Atlanta, and everything there is new – from 1920 or newer,” Haney said. “For me and my husband, we both love the architecture of Mt. Royal, the old historical homes, the community of artists, mixed families – generationally and racially – so the neighborhood has a nice mix.”