It’s hard to imagine how relations between Baltimore Mayor Stephanie Rawlings-Blake and the faith and community group BUILD could have deteriorated more dramatically.

Last summer, BUILD had been working with staffers from the mayor’s office at City Hall to develop a proposal to put 50 residents of the Oliver community to work – a pilot transitional program aimed at keeping people out of jails and off the street with construction and other jobs.

But last night, BUILD members were blasting the mayor before a crowd of about 200 in an East Baltimore church, saying she reneged on her promise to help fund the program in the Oliver neighborhood and has now refused to meet with them. 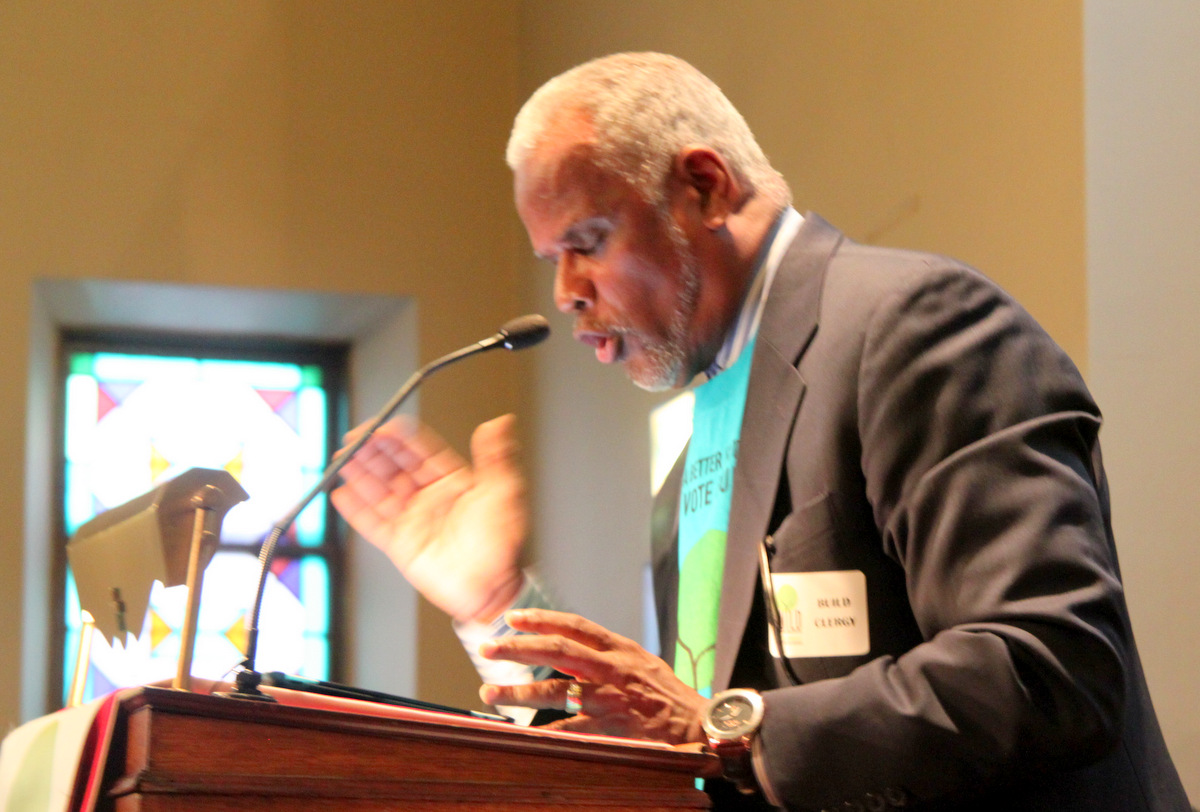 “I believe she set us up,” Dr. Marshall F. Prentice, pastor of Zion Baptist Church, said.

“Where you go, we will show up,” Prentice said. “When she sleeps at night, wake her up, God! And remind her that BUILD is calling her!”

“She can find money for Harbor Point, but what about Oliver?” BUILD jobs team coordinator Melvin Wilson thundered, as the crowd chanted, “Let our people work!”

“Don’t Destroy me, Employ me”

Rawlings-Blake’s press office did not respond to The Brew’s email and phone call seeking comment on the accusations.

Press secretary Caron Brace said she was “too busy” to talk about the issue and would get back with a response after conferring with Communications Director Kevin Harris.

In contrast, members of BUILD (Baltimoreans United in Leadership Development) were ready yesterday with media releases and time lines to lay out the narrative and explain the program they have been proposing.

They said BUILD leaders had committed $1.2 million to fund the majority of the program, but were asking the city to invest an additional $594,000 over three years to fully fund it.

The pilot program would serve 50 adults from Oliver and local neighborhoods over three years. After a brief orientation, participants would get trained on job sites, receiving tools, uniforms, $10.69 an hour pay and a variety of social supports to help them succeed. The one-year training program leads directly to apprenticeships with the International Painter’s Union.

The Reinvestment Fund (TRF), the Philadelphia-based community investment group BUILD has worked with for the past decade in Oliver, would be a partner.

BUILD leaders said their public safety working group met more than a dozen times in the community and also at City Hall, at one point in February lowering their ask to the city, after finding additional funds.

But, according to BUILD organizer Jimmy Stuart,  things turned frosty about five weeks ago, with no response from the Mayor and staffers saying she was not available anytime between March 25 and April 8 to meet with them. 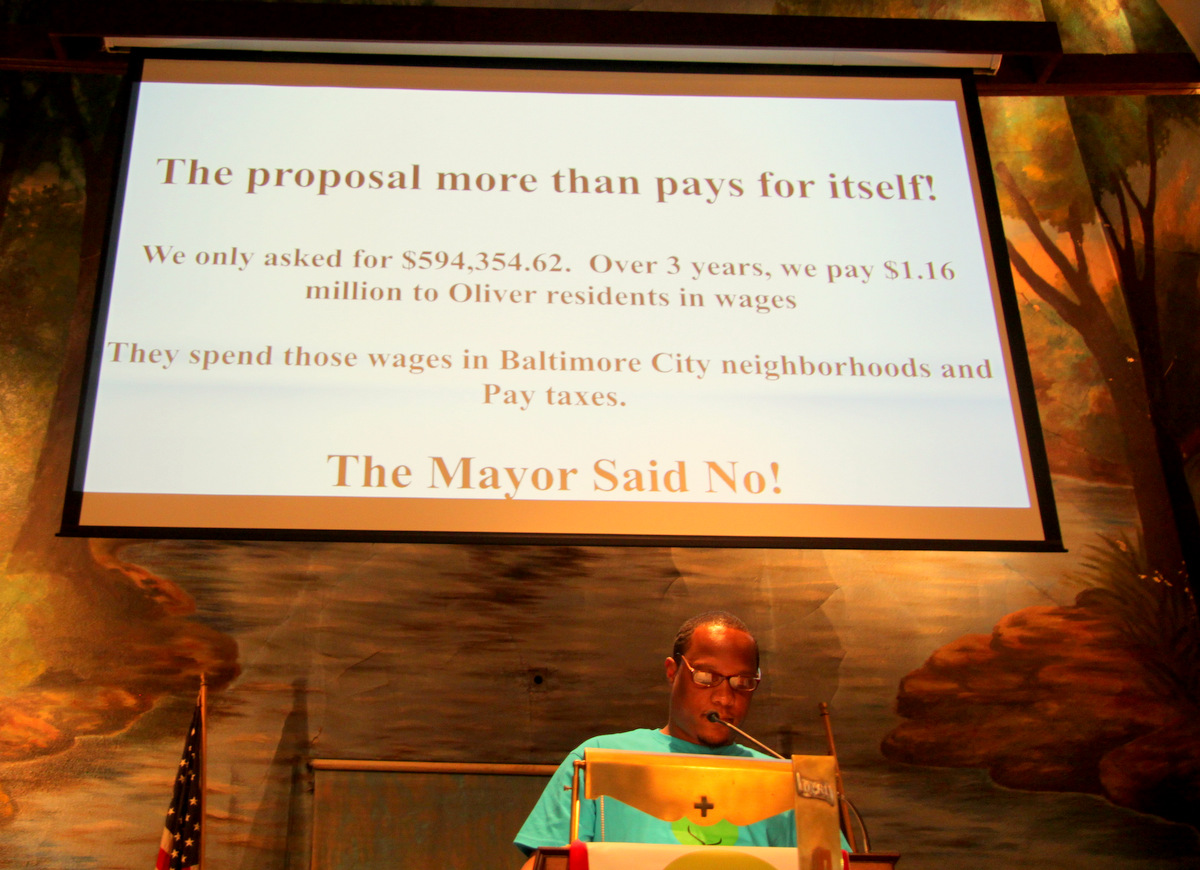 The crowd booed as speakers accused Rawlings-Blake of forsaking the jobs program. (Photo by Fern Shen)

“Then we got a letter from them yesterday [Monday] saying the city doesn’t have the funds,” he said.

Asked how the dialogue broke down, Prentice said a mayoral  staffer “who spoke from the heart” made promises to BUILD, “but it turns out he spoke without her approval, he did not have that authority.”

Prentice said he thinks Rawlings-Blake needs to shift her priorities to jobs and prepare better to make sure city residents are lined up to get construction opening up soon for the massive school construction program, the Red Line and other projects in the pipeline.

One aspect of the BUILD program, organizers said, is that a criminal record is not a barrier to participation. At Prentice’s church up the street, a program called Turnaround Tuesdays is already attracting people struggling to find jobs despite having a rap sheet. Several were on hand last night to tell their stories and lend their support to the BUILD program.

Dominic Rabey, who served four years in prison for a handgun charge, said he turned to the street because “I felt like I had no other opportunities.” The 30-year-old said he has been going to Turnaround Tuesdays for a month and a half and is committed to finding a job.

“I’m willing to learn, to train, to do anything to keep out of the streets,” he said.

Bernadette Buckson, 51, said she has been looking for work for 18  months. She said she was in and out of jail for selling drugs, but has been out of the system since December 2011 and lost a job as prep cook when the establishment ran out of money. When the people from BUILD gave her a flier about the program in February, “I was on the corner.” 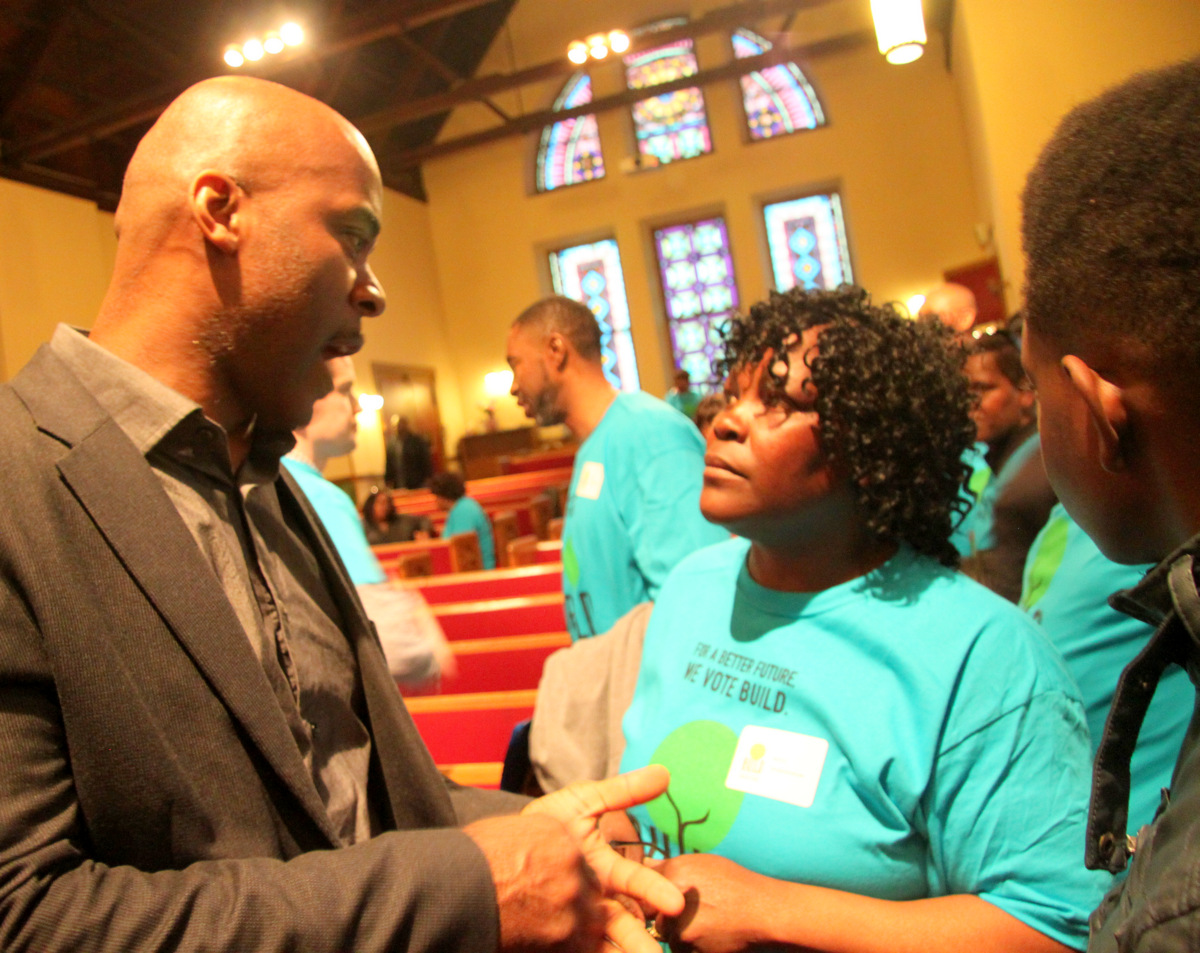 Lloyd A. Williams tells Bernadette Buckson about a possible opening at his mother’s daycare business. (Photo by Fern Shen)

She says she has a lot of work experience – as an educational assistant, daycare worker, in warehouses and at a laundromat. Since coming to Turnaround Tuesdays, she said, she’s received help with “writing a resume, interview skills, how to dress, everything step by step.”

Now she just needs some employer to look past her criminal record and giver her a chance. “I’ll take anything that comes my way,” she said. “And I’m going to be the best of the best at whatever it is.”

Meanwhile, Buckson plans to join the BUILD group at the Board of Estimates meeting on April 23 where they plan to ask the Mayor to change her mind and fund the program. (“I’ll be there with bells on.”)

If she had a chance to address Rawlings-Blake personally, Buckson said she would ask her: “Why not us?”

“Anything downtown or at the Harbor, you can find money for. But what about us?” 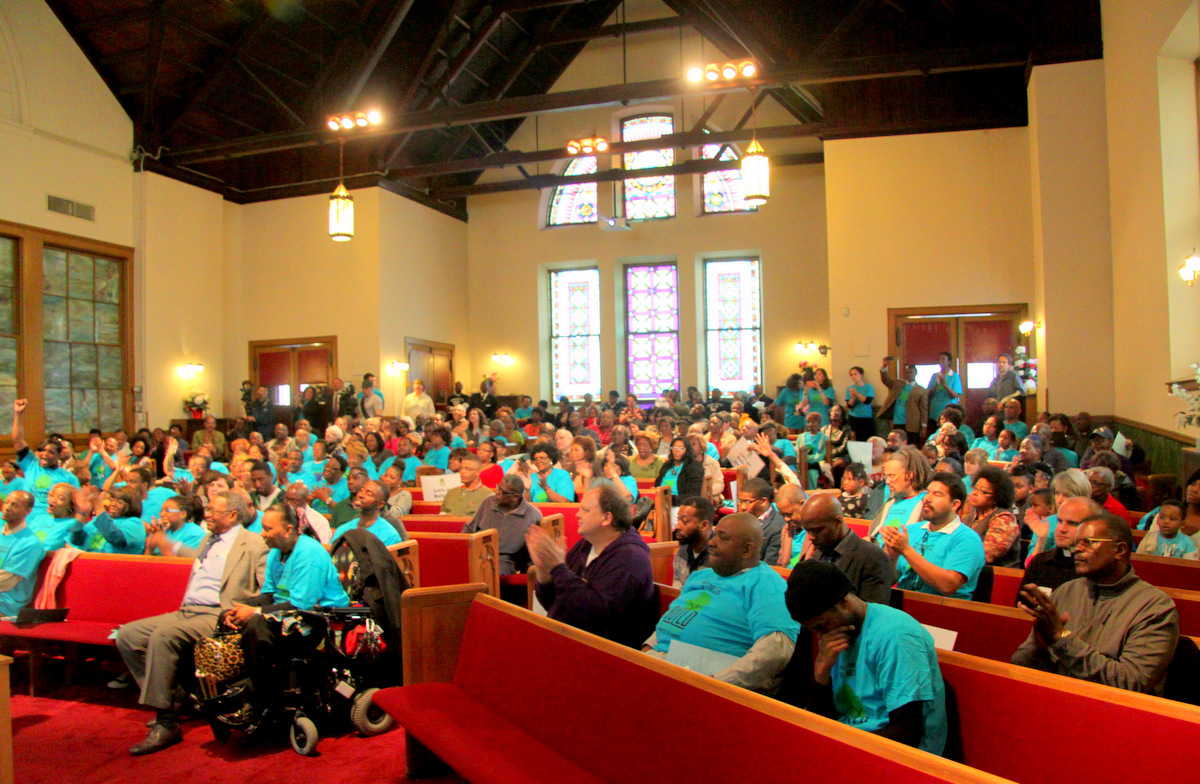 Crowd at Memorial Baptist Church called on the Mayor to fund a jobs program. (Photo by Fern Shen)