Picture your basic scene from The Wire, a long stretch of dilapidated rowhouses slated for demolition, emblazoned with two-story-tall purple-and-white letters spelling out the words “FOREVER TOGETHER.”

Daylight is visible through the fallen-in roofs. A black plastic bag blows down the street like tumbleweed in an Old West ghost town.

Turn the corner onto North Milton Street and the towering memo continues: “I am here because its HOME.”

In recent days, these buildings have been a canvas for the celebrated New York graffiti-writer-turned-gallery-artist Steve Powers, who is is quietly putting the finishing touches on the city’s newest splash of public art.

Powers – encountered onsite up on a lift truck Monday – declined to talk to a reporter about the project.

But Tracy Baskerville, communication director for the Baltimore Office of Promotion & the Arts (BOPA), confirmed that the mural is a “pop-up teaser” for Powers’ city-sponsored “Love Letter to Baltimore” project.

FOREVER TOGETHER is “meant to get everybody excited” about the Love Letter project, that will include as many as 10 murals at locations to be determined around the city, Baskerville said. 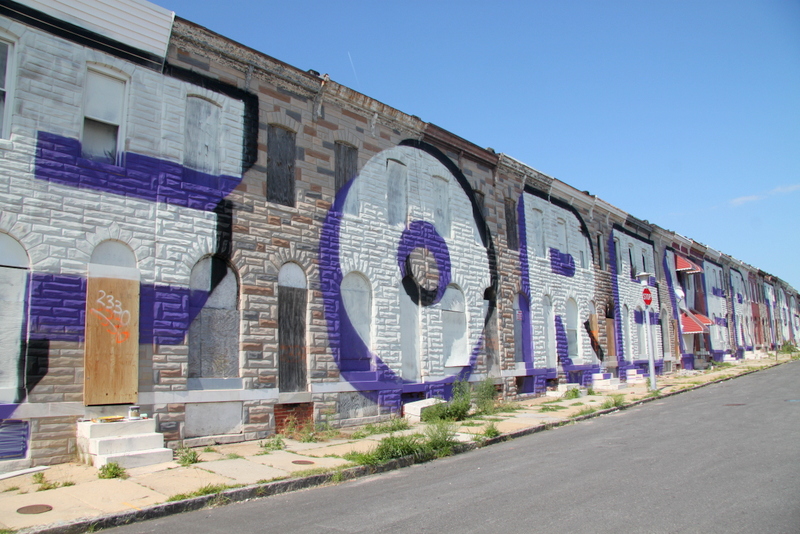 FOREVER TOGETHER now stretches across the 2300 and 2400 blocks of East Eager St. On Saturday, police found a dead body in the alley behind 2410 East Eager. (Photo by Fern Shen)

Baltimore is the latest recipient of a “Love Letter” by the prolific Powers, whose tag is ESPO. He did one for Philadelphia in 2009, for Syracuse in 2010, for Brooklyn in August. He’s done them in Europe as well as the U.S.

There’s even a book about the project, a Tumblr page and now, going up on Powers’ Instagram page, are photos of the mural-sized mash note he’s making for Baltimore.

As for the project’s cost, Baskerville said there’s a $50,000 budget to be paid for by the city’s Department of Housing and the Baltimore Development Corporation (BDC). After publication, the artist said in a comment on the story that his fee “was 1k, which I’m donating to the non-profit organization that is responsible for securing the funding for tearing down these houses and building a park in this place.”

How does Powers explain the message of FOREVER TOGETHER on this once-thriving, now-ruined patch of Baltimore, where the buildings will soon be gone forever, and the residents who lived in them are no longer together?

“Temporary is permanent and together can be forever,”Powers posted on Instagram earlier this week.

“We’re in Baltimore doing what is colloquially known as a ‘blockbuster.’” (That’s graffiti-writer lingo for big square letters stretching across a block of buildings or a whole train.)

Residents Moved Out, Block Slated to Be Razed

Picking through the irony for facts has been tricky, since Powers and city housing officials have not responded to several queries by The Brew.

Residents of the FOREVER TOGETHER blocks were required to move over the past year by the city because the block is listed as part of a “community development cluster” under the city Vacants to Value program.

The entire block was identified for demolition under that program earlier this year, using funds from a national attorney’s general settlement on mortgage fraud that were awarded to Baltimore. 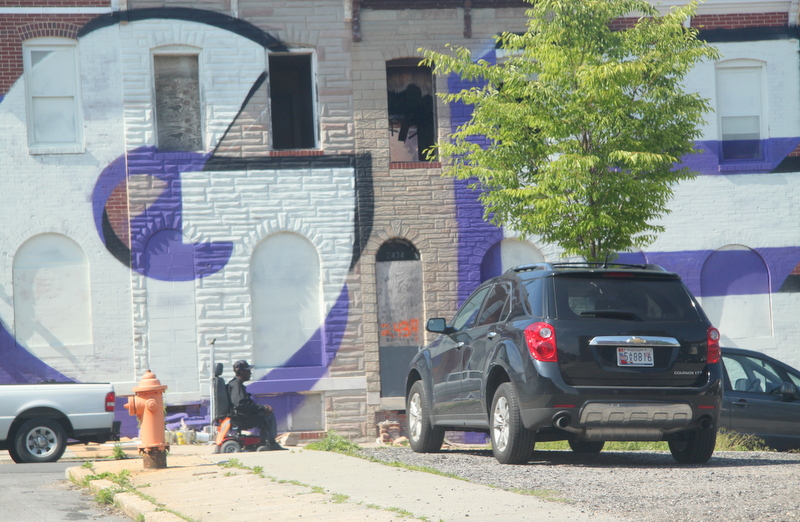 Residents have been co-existing with Powers, some of them not happily. (Photo by Fern Shen)

Some nearby neighbors said they had been told the blocks would be demolished as soon as next month.

In there too along with the irony is plain sadness.

On Saturday, police found the body of an apparent drug overdose victim in the alley at 2410 East Eager Street behind the FOREVER TOGETHER mural – once again proving that life has a strange way of imitating (and mocking) art in Charm City.

Not All Feeling the Love

Neighbors say they have stood speechless in front of the mural as it has shaped up, scratching their heads trying to make sense of the message.

“It does make it look nice, I guess,” said Tony Stumps, sitting on his stoop on Montford Avenue Monday.

The project has angered as well as baffled the people who live in the blocks closest to the project, who said no one from the city had approached them to discuss it.

When Powers showed up one Sunday afternoon in mid-May to begin sketching an outline of the letters atop scaffolding he had assembled, he was run off by hostile residents of the Montford Avenue corridor.

In interviews with The Brew, they said Powers was verbally blasted for attempting to, in effect, vandalize properties. “We wanted to know why he was painting the houses that were going to come down,” said Janice Jacobs-Hudson*, a community leader.

Jacobs-Hudson said she confronted Powers on whether he was being paid to paint the vacant, blighted houses scheduled to be demolished when the funds could be better spent on much-needed things, such as hiring youth for summer jobs.

Powers returned a couple of days later and told them that the work is part of a “love letter to Baltimore.” 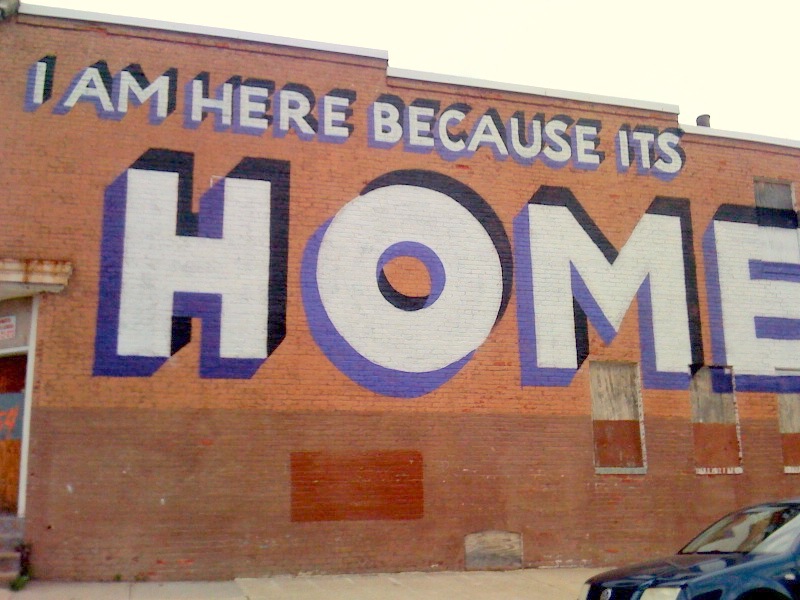 Around the corner from FOREVER TOGETHER is another Powers mural. (Photo by Melody Simmons)

“If it Lasts a Day, it Will Last Forever”

On Instagram yesterday, he posted about this sort of confrontation explicitly:

Love Letter Baltimore starts here. Miss Johnson couldnt fathom why we’d paint this block of rowhomes that are slated for demolition this month. I told her if it lasts a day it will last forever. She then told us about Tanya, who set a fire in her house that killed her 6 kids and herself. That house happens to be the T in Together. So, sad as it is, what we painted works for this community on at least 2 levels. And for once I cant wait until my work is taken down. Then this place will be a park where the OTM youth are cooling out. You dont know OTM? Anybody thats OUT THE MUD knows, so we know and maybe you know too. Thank you BOPA thank you Baltimore, thank you Miss Hudson, Thank You Mr Johnson, Thank you Mike Matthew Merrell Ryan Ryan Jeff Maggie and Ed!

On Tuesday, the mural stood completed, with much of the message punctuated by broken windows, cracked front steps, roofless dwellings and overgrown weeds.

A crew from a private company in White Marsh sat on the front steps in the 2300 block of E. Eager St. in the midst of a project to disconnect the gas lines on the block.

Another worker said he was probing some of the vacants on the block for asbestos.

“I can’t describe this – can’t put it into words,” a bystander said.

* EDITOR’S NOTE: An earlier version of this story misspelled the name of the president of the Ashland Avenue Association, Janice Jacobs-Hudson. The Brew regrets the error.