The Baltimore Arena will be rebranded “Royal Farms Arena” under a deal to be inked on Wednesday by Mayor Stephanie Rawlings-Blake and the Board of Estimates.

The convenience store chain will receive naming rights to the complex in return for paying the city $250,000 a year for the next five years ($1.25 million total). Only time will tell whether the giant venue will get the same hipster hashtag as the ubiquitous fried chicken and breaded fries dispensaries – “RoFo.”

Royal Farms will also get first rights to negotiate with the city for naming rights for a new downtown arena that’s been talked about for a dozen years.

Stretching a full block between Baltimore and Lombard streets and Hopkins Place and Howard Street, the arena has been the scene of thousands of shows and games entertaining millions of fans.

On September 14, 1964, the center famously hosted two sold-out shows of the Beatles. Other musical acts that have performed on its stage include The Rolling Stones, Bob Dylan, Frank Sinatra, Luciano Pavarotti, Bruce Springsteen, Jay-Z, Pharell and Rihanna.

During the William Donald Schaefer era, the Civil Center was renovated and redubbed the Baltimore Arena. In 2003, it was named the 1st Mariner Arena after Edwin Hale’s 1st Mariner Bank purchased naming rights. The bank paid $75,000 a year to keep its name shining inside and outside the building. 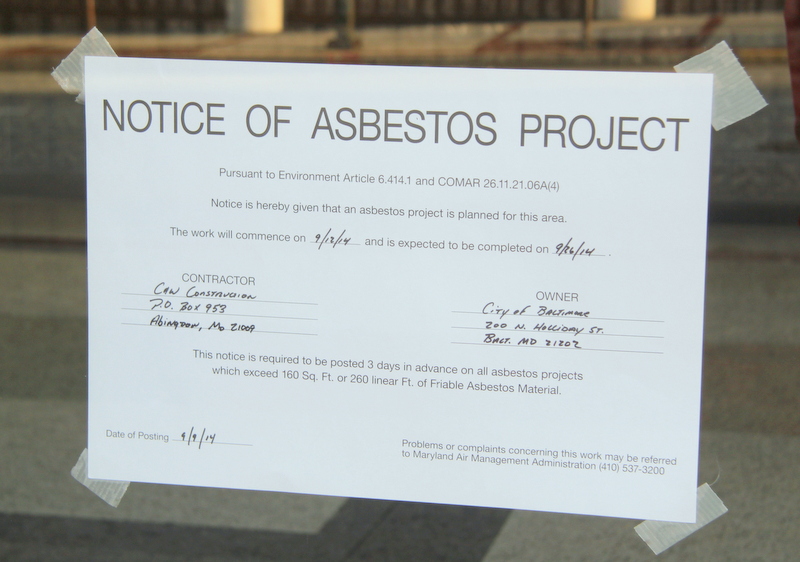 A notice taped today on the windows of the Arena warns that an asbestos removal project is underway. (Photo by Fern Shen)

That agreement ended last year after Hale and the city could not come to new terms.

The manager of the facility, SMG Holdings, was charged with identifying a new title sponsor.

SMG will receive a $50,000 finder’s fee from the city. In addition, the city will pay SMG $150,000 to design, install and maintain Royal Farm’s signage on the building, according to the Board of Estimates agenda.

It has grown rapidly in recent years, making its first foray into downtown Baltimore in 2012 when it turned Burke’s Restaurant, an institution at Light and Lombard streets, into an outlet.

More recently, the chain has been locked in a legal battle with a coalition of community associations in Northeast Baltimore opposed to its plans to build a 24-hour, 12-gas-pump convenience store at Harford Road and Glenmore Avenue.

Next month, the Court of Special Appeals in Annapolis is scheduled to hear the residents’ appeal of a decision by the city Zoning Board to approve a conditional use for the new store.