Unlike the Rawlings-Blake administration, which signed a two-year contract with a Connecticut company to sell insurance to homeowners against possible water pipe breaks, Baltimore County Executive Kevin Kamenetz says “additional insurance is not necessary.”

Kamenetz has warned county residents to beware of unscrupulous companies who pitch warranty plans by telling homeowners they may be on the hook for thousands of dollars in repairs.

“As the Baltimore City Department of Public Works prepares to install new electronic water meters in Baltimore County this fall, the County is reminding citizens to be wary of solicitations from insurance companies telling homeowners that they are not protected against damage during the installation.”

This September 9 release quotes Kamenetz as saying, “I am very disappointed that some companies are trying to scare people into purchasing insurance plans that they do not need. These solicitations have even been sent to homeowners who are on well and septic, and therefore will not be subject to installation of electronic water meters.”

The Baltimore Department of Public Works (DPW) is preparing this fall to start the lengthy process of installing “smart,” or electronic, water meters to improve chronically poor meter-reading practices and erroneous water bills. In Baltimore County, the first meters will be installed in Bowleys Quarters. Another trial run of meters is slated for downtown properties in the city.
____________________________________
PART 1: Concern and confusion as city promotes water pipe warranties from one company
____________________________________
While the Rawlings-Blake administration is pushing a private warranty program from HomeServe – DPW director Rudolph Chow signed a letter emblazoned with the municipal seal encouraging residents to buy the service – the county says such repairs should not be needed unless the contractor causes the damage.

“We believe it will be an extremely rare occasion when there might be minimal damage during the installation of these new meters,” Kamenetz said.

Instead of using a private vendor to insure against meter mishaps, the county has set up its own financing plan to help its residents pay unforeseen repair bills.

Under the plan, property owners can select their own plumbing contractor and provide the county with the cost for the repair. The cost estimate would be reviewed and approved by the county prior to any offer of financing. Then the county would pay for the repair and the cost, added to the property owner’s annual property tax bill and amortized over 40 years at a 5% interest rate.

Asked if HomeServe approached his office seeking to set up an insurance plan in the county, Kamenetz has not responded.

HomeServe USA Repair Management Corp., a division of HomeServe PLC based in Britain, has been cited for its aggressive sales tactics. 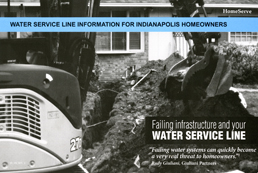 A recent solicitation by HomeServe to homeowners in Indianapolis, Ind., was illustrated by an ominous black-and-white picture of a backhoe tearing up a front yard. (ibj.com)

In 2010, the U.S. company was fined $7,500 by the Attorney General of Kentucky and $10,000 by the Ohio Attorney General because the agencies found the company’s solicitation was misleading and implied that the service was mandatory.

The Better Business Bureau of North Alabama issued an advisory about a HomeServe solicitation in 2011, calling it misleading to consumers. That same year, the Massachusetts Attorney General reached a $75,000 settlement with HomeServe for allegedly deceptive advertising.

In February 2014, the parent company  was handed a record £30.6m fine in England for mis-selling insurance policies and mishandling customer complaints.

Britain’s Financial Conduct Authority said staff at HomeServe had focused on the “quantity not quality” of sales to the detriment of customers – many of whom were vulnerable older people.

HomeServe was faulted by regulators for “serious, systemic and long-running failings extending across many key aspects of its business.”

The fine was the largest ever imposed in Britain for mis-selling to retail customers, beating a £28m penalty against Lloyds Banking Group last year, according to The Guardian.

On its website, HomeServe says it only uses local, licensed and insured technicians and guarantees all repairs.

UPDATE: Sari Martin, a public relations spokeswoman for HomeServe, said the company’s past issues have been resolved and that it is currently well regarded.

“On the BBB issue, that is an old issue from 2011,” Marin said in an email. “HomeServe’s current BBB rating [in Connecticut] is an A-. We strive to provide our 1.6 million customers holding 2.5 million service plans with the highest quality service and continue to earn extremely high customer satisfaction ratings.”

Jody Thomas, vice president of communications for the Baltimore BBB, said the agency has been monitoring HomeServe after receiving inquiries from Baltimore property owners.

“Residents need to do their homework. This is one company. One option. There are other avenues. What they need to find out is what’s excluded. Read the fine print,” Thomas said.

Before enrolling in any warranty service, residents should check with a local, trusted plumber about what types of problems could occur to their outside pipe lines and how likely they might occur.

Consumer Reports, which has specifically warned readers to be wary of HomeServe, offers this advice: “Putting money in a fund for a rainy day is smarter than paying for a service-line repair plan.”

BBB’s Thomas said HomeServe had been soliciting on its own in Baltimore for years before it won an exclusive contract to co-market its warranty plan with DPW.

HomeServe was one of four companies to respond to Baltimore City’s Request For Proposals (RFP) for a residential water and sewer line protection program. The other companies were American Water Resources, Utility Service Partners Private Label, and Dominion Products.

The city said that HomeServe would provide, at lowest cost, services that were important to residents living in neighborhoods with an aging infrastructure.

At a May 28 press conference, Mayor Stephanie Rawlings-Blake characterized HomeServe’s rate of under $9 a month – with a special $5.99 a month introductory rate for the first year of enrollment– as “very affordable.”

She explained: “If the problem is on the residents’ property, it’s their responsibility. How many people would be able to pay for that if they got hit with a $4,000 bill?”

In a mailer to city residents signed by DPW chief Rudolph Chow, HomeServe describes how much a homeowner might have to cough up to fix a utility line leak. (Brew photo of mailer)

On June 5, the mayor joined with HomeServe Chief Commercial Officer Deb Dulsky and DPW chief Chow in calling on residents to update their sewer and water lines. A press release quoted Rawlings-Blake as saying:

“As we accelerate the replacement of our water mains and sewer lines, we need to remind our residents that their private lines are also getting old and will need to be addressed – which can be costly for the homeowner. Our goal is to ensure that there are other low-cost options available.”

In promoting the program, the city has been using HomeServe’s estimates of how much a line replacement could cost.

Any replacement involves the “exterior” pipes that go from the outside wall of your house to where the pipes connect to the city system. (Plumbing problems inside your house, such as broken pipes, clogged pipes and flooded basements, are NOT covered by the HomeServe warranty.)

The city says replacing a water service pipe averages $2,223 and replacing a sewer line is $3,697. The figures are based on HomeServe’s “national average repair costs as of April 2013.”

Because most Baltimore City rowhouses are just feet away from public mains, the national average – which includes suburban homes with typically longer utility lines – may not be reflective of the cost to city residents.

During the RFP process, a prospective bidder asked DPW: “How much does a repair typically cost?”

DPW’s answer was “Unknown as city does not contract for private repairs.”

Another question was “How many leaks or breaks occur on customer-owned water lines each year?”

The city’s answer: “Unknown as they occur on private property.”