Overtime costs are rising sharply as Baltimore City Police have more than doubled the number of budgeted officers to watch over and patrol near the Horseshoe Casino since its August 26 opening.

Under the original security plan approved by the mayor’s office, seven officers, one lieutenant and three sergeants were assigned to a “casino mini-district” established around the privately owned and operated casino. (Caesars Entertainment provides its own security inside the facility).

“Community impact funds” generated by casino revenues were supposed to pay for staffing the mini-district, which was established because response times from the Southern Police District, the closest station to the casino, were believed to be too slow to ensure the safety of the facility and its patrons.

But after reviewing security at the Horseshoe Casino in Cincinnati, Police Commissioner Anthony Batts decided to “staff up” the Baltimore casino to make a stronger police presence. He assigned 11 more officers to the mini-district, for a total of 18 officers, Lt. Col. Melissa Hyatt told the Casino Local Development Council (LDC) last week. 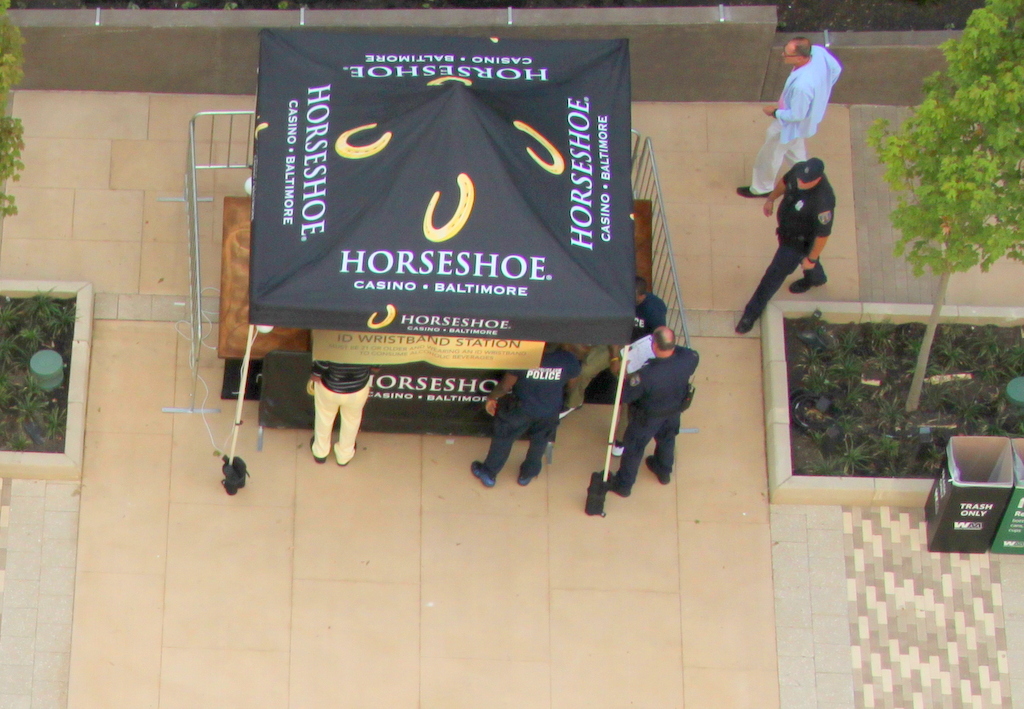 Baltimore police at the Warner Street plaza of Horseshoe Casino on its opening weekend in September. (Photo by Fern Shen)

Without sufficient funds in this year’s LDC budget ($1.5 million through June 30, 2015), Batts is “donating” officers to the casino zone – and paying for their overtime, shift differential and vehicle costs through other departmental funds, Hyatt said.

As a result, city taxpayers are likely to pay between $1 million and $1.5 million more for Horseshoe-related police security than predicted by the Rawlings-Blake administration, based on information presented to the LDC.

These higher costs come at a time when casino impact funds are expected to be significantly lower than originally projected, The Brew reported last week.

So far, no major crime incidents have been reported at the casino mini-district, although “they are definitely making arrests,” one police official told the LDC, for loitering near the casino and other misdemeanor charges.

The department’s concerns about possible crime and violence near the casino centers on Horseshoe’s 24-hour liquor license, the only such license in the city. A “spending plan narrative” of casino funds provided this commentary:

One of the Police’s primary concerns is that the 24-hour liquor license will draw some of the unfavorable gang-affiliated crowds after the clubs/bars close at 02:00 AM. These individuals will be driving in vehicles and have been known to be armed. BPD needs to increase enforcement in the area surrounding the casino in order to ensure safety within the actual property of the casino.

BPD is uncertain as to how its calls for service will be impacted. However, based on lessons learned elsewhere, BPD is certain that call volume will increase in the radius surrounding the casino. Although the casino will be hiring officers on the inside of the establishment, the officers in the mini-district will need to be capable of providing a rapid response in order to assist those officers during a large scale issue or incident of violence.

Expenses related to the casino are increasing in areas other than direct police protection. Lt. Sam Hood, chief of CitiWatch, told the LDC that additional wages will be needed to monitor and maintain the new surveillance cameras and fiber optic network installed around the casino earlier this year at a cost of $1,024,000.

CitiWatch wants to add cameras to the casino garage and the Mayor’s Office of Information Technology (MOIT) wants to hire a consultant to survey broadband services for the district, but there is no funding available in the LDC budget.

Total runs by the fire department have increased by 400%, mostly for Emergency Medical Services related to the casino, according to Mark Wagner, assistant chief of operations for the Baltimore Fire Department.

He said the department has responded to 83 calls so far this year– up from 18 calls in 2013 for the casino district. Among the emergencies handled by city medics have been three attempted suicides and three people hit by automobiles.

The Fire Department has requested $850,000 for renovations to Engine Co. 55 on Bush Street and elsewhere for Horseshoe’s needs, plus $1.2 million to staff a full-time medic unit within the casino impact area.

Traffic enforcement is also above budget. The cost of TEOs (traffic enforcement officers) stationed at Russell and Warner Streets during evening hours – and for eight TEOs assigned to “casino deployment” during Orioles baseball and Raven football games – was budgeted at $25,000 a month.

But during the first five weeks of casino operations, the city spent $79,990 in traffic enforcement, mostly in overtime costs. 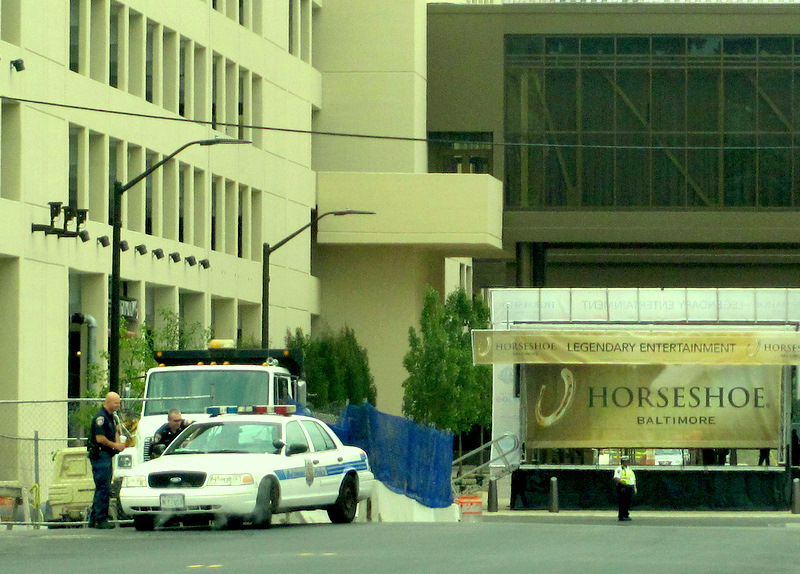 Officers confer on Warner Street next to the casino parking garage a few days before Horseshoe opened. In the background is a city traffic enforcement officer. (Photo by Mark Reutter)

Other expenses are more in line with the budget. The cost of providing city trash and sanitation services amounted to $148,478 in the first five week of Horseshoe’s operations.

The biggest expense ($93,307) was for the purchase of a new load packer, expected to be installed near the casino next month.

In August, the Bureau of Solid Waste created a three-person crew exclusively to perform street cleaning and trash collection around the casino. The agency also spent $37,307 on eight “BigBelly” solar-powered trash receptacles, which have been placed around the casino area.

Looming on the horizon is a permanent home for the BPD’s casino mini-district. Currently, police are using a trailer owned by the Whiting Turner Contracting Co. north of the casino. The trailer has been donated free of charge through January 2015, but after that, the expected monthly rent will be $2,000.

The fire department has lobbied for construction of a public security building to house the police mini-district, medics and fire apparatus. There are no estimates yet of the cost of such a facility.