More than a hundred people came to Baltimore school headquarters last night to tell the board the decisions they are making about school closures and relocations will impact students’ lives in more ways than they know.

Jamal Jones, a leader of the Baltimore Algebra Project, came to protest the closure of Heritage High School in Northeast Baltimore.

The facility, located in the Lake Clifton Complex, is being closed primarily for poor performance. Some speakers said students would be losing more than a nearby source of classroom instruction.

“The school system needs a way to sustainably phase out students so those supports are maintained,” he added, noting that the Algebra Project, an educational advocacy group, still has testimony to give and will be attending the December 17 meeting where the school board votes on school closings. 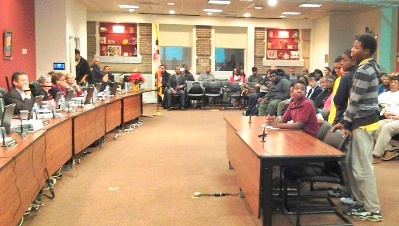 Students testify against school closures before the city school board. (Photo by Danielle Sweeney)

Another 12 schools are slated to undergo various changes as part of a “portfolio review,” including five school relocations, five grade reconfigurations, one non-renewal of an operator contract, and one expansion of a special-ed program.

The message from many who testified last night: don’t overlook the positive impact that even poorer performing schools have on students and communities.

Some talked about how transportation will become an obstacle for families faced with the loss of their neighborhood school, while others spoke about how schools provide health care and other social supports that many Baltimore students can’t get elsewhere.

Too Fast, Too Soon

Lillian Hunt said she is frustrated at the speed with which the school system is making decisions about her and her family’s life.

Her son attends Maritime Industries Academy High School, now located on Sinclair Lane in Northeast Baltimore, which is recommended for relocation to Cherry Hill in far South Baltimore to be closer to the waterfront. 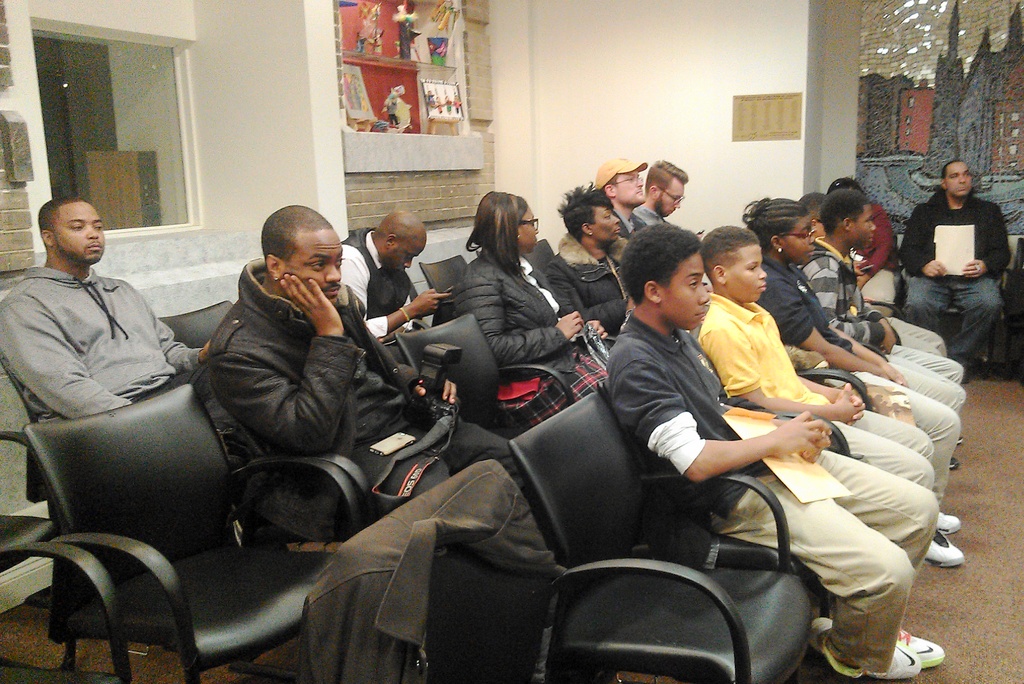 “My son has been here for three years. He wants to go into the navy or maritime school. Now the school is moving to the other side of town,” she said.

At a single meeting held about the relocation, she continued, school officials provided one-sentence answers to parents’ questions about the move. She acknowledged that she is worried about her child’s safety in Cherry Hill.

Councilwoman Sharon Green Middleton, who represents Northwest’s 6th District, pleaded for Langston Hughes Elementary not to be closed. The former teacher reiterated her concerns about safety, and said the schools that Langston Hughes students would be forced to attend would be more than a mile away.

“The students are safe there, safe from serious problems in the community,” she said.

Langston Hughes has experienced significant drops in enrollment since the announcement of its pending closure. (The closure was originally planned for 2017, but recently moved up.)

Clezel Farmer, a grandparent of a Vanguard Collegiate Middle School student, told The Brew that she understands the need for change in the school system, but resents the “haphazard” decision-making she feels the school system has made.

Vanguard was originally slated to be renovated in year six of the 21st Century Schools plan, but is now recommended for building closure and its program to be relocated to Northeast Middle School, whose academic program is set to shut down.

Vanguard student Solomon Williams said taking away a school takes away part of a kid’s identity. “Vanguard is a big part of who we are,” he told The Brew after the hearing. “We respect it.”

Second District Councilman Brandon Scott and community leaders have recommended co-locating the schools at the current location of Vanguard and immediately renovating the Northeast Middle building.

“Northeast is a school that is in need of massive renovation that no student should be subjected to,” Scott said, in an emailed statement. “If the purpose of the construction plan is to place students in a better building, then renovating Northeast before any students learn there again goes without saying.”

Farmer put the issue another way: “[School Superintendent Gregory E.] Thornton works on information presented to him. He needs to visit Northeast Middle,” she said.

Farmer believes closing the Vanguard building will impact student’s lives in ways the School Board isn’t unaware of. “It has a fully operational health suite. We have a licensed RN and a physician assistant who comes in. This is the only place some of our kids get medical care. You are taking that away from them.”

How to be a Better Steward

The board asked few questions last night. Instead they yielded the floor to the dozens of parents, community leaders and students who signed up to speak.

Taking in the often critical testimony, David Stone, board vice president, at one point responded to a comment about the school system’s lack of professionalism in communicating the proposed closures and changes.

“Part of being a professional is understanding the money we have,” he said, underscoring the school system’s awkward position. “How can we be better stewards of the money we have? Who should I take the money from?” he asked.