From struggling neighborhoods on the west side to rowhomes in South Baltimore,  unsolicited advertisers and fliers have generated complaints in town for years.

And the worst offender, some say, is the city’s newspaper of record, The Baltimore Sun, and specifically its ad supplement, SUNplus.

Every Wednesday and Thursday, quite reliably in some neighborhoods, the paper can be seen strewn around doorsteps and sidewalks.

Chris Moore, who lives on Marshall Street in South Baltimore, has been trying for weeks to get SUNplus deliveries stopped and says, since he travels out of town frequently, the problem is both annoying and worrisome.

The supermarket and drug store ads, wrapped in one broadsheet of newspaper and stuffed into a plastic bag, pile up whenever he’s away and he fears they are a telltale sign for thieves.

“I’ve had my car vandalized and I worry about break-ins,” says Moore, who lives a few blocks from the Cross Street Market.

Despite several attempts, Moore can’t convince the Sun to stop barraging him with these, essentially, dumped-off clumps of paper and plastic. 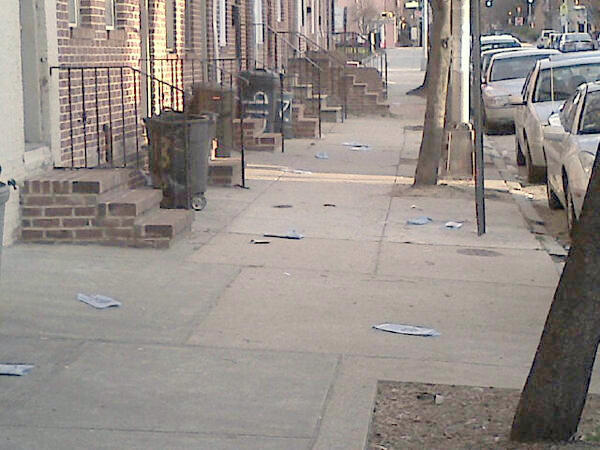 “I can stop mail delivery. I can stop newspaper delivery, but I can’t stop this, and I never even asked for SUNplus,” he says.

Over in West Baltimore, Marvin L. “Doc” Cheatham has been experiencing the same troubles with the SUNplus as Moore. He regards SUNplus as a major source of trash in his already challenged community.

Cheatham says he understands that the Sun is just trying to do business and admits that some neighbors do look at the ads and coupons. But he says the company delivers SUNplus in a way that makes it more like litter.

“The bags are tossed on the sidewalk and not on steps or into yards. It trashes up the community. Honestly, we have enough problems here,” he says of his Easterwood neighborhood west of Sandtown.

If Cheatham and his neighbors don’t pick the SUNplus bags up every Wednesday, the bags eventually end up as a wet, pulpy, plastic mess in the city’s storm drains, he says.

“And when they get in the drains, that’s another problem for us,” he adds.“The worst part, though, has to be the Sun delivering to vacants.”

The Easterwood area, Cheatham says, has about 900 homes, and 200 are boarded up. “Obviously, no one lives in them. So no one is going to pick up that advertisement,” Cheatham says. “It makes no sense.”

She promised to follow-up on any specific complaints in the story.

Getting Around the Law

The Sun has produced and distributed the SUNplus supplement for years. It goes out to 662,402 area non-subscribers each week, according to 2013 figures posted on their website .

The Baltimore Sun Media Group web page describes the paper as “a weekly product with feature stories and fun puzzles” (this week’s feature is about cooking Cornish game hens) that allows advertisers to “reach a population” not “captured by the Sun.”

The “puzzle” in this week’s edition is the paper’s regular crossword puzzle. There are also reviews of gluten-free stuffing and instant potato pancake mix. The ads are from Safeway, Michael’s, Shoppers, ALDI, and Ride Aid. There are also lots of coupons.

Even though the “product” is 95% ads, SUNplus is technically a newspaper because of its feature story. And that’s apparently how the company circumvents Article 19, Subtitle 1, of the Baltimore City Code.

Daily papers elsewhere have sought to boost sagging revenues with similar unsolicited ad drop-offs – and have likewise rankled some of those on the receiving end. In San Francisco, Chicago, Philadelphia and Atlanta, recipients have battled them with stickers in the windows, consumer complaints, lawsuits and ordinances.

Cheatham and Moore both have experienced temporary success in stopping SUNplus delivery. Moore got his name taken off the delivery list, only to have it inexplicably put back on a few months later.

“I can’t seem to make this stop permanently,” he said.

Cheatham, former director of the Baltimore chapter of the NAACP, said repeated phone calls to the Sun did him little good. “I was told that I would have to speak to the delivery person directly,” he said.

When that didn’t work, Cheatham took a more radical approach. He called the company and told them he was making his own delivery of SUNplus – to the Sun’s loading dock. 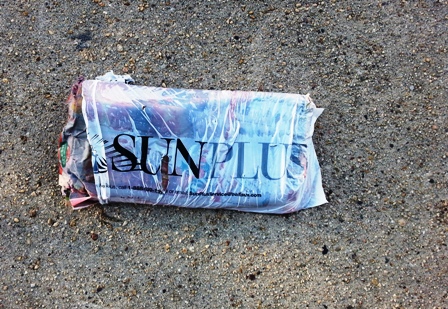 To some, perhaps a source of interesting ads and recipes. To others an un-killable zombie trash phenomenon. (Photo by Carol Ott)

“My neighbors and I got a truck, gathered up about 500 of them from around the community and dropped the papers off,” he said. “They were soaked and had been sitting in the bags for a while. It was a real mess.”

No one acknowledged the delivery, but Cheatham says delivery of SUNplus to vacants stopped. Until a few months ago, that is.

Now he’s back on the phone with the company. “It sounds like someone may have witnessed a delivery error which at times may occur,” Mutchnik said, when asked about the vacants. “SUNPlus carriers usually provide us with information on undeliverable addresses.”

Moore says he doesn’t have the time for Cheatham’s tactics, but has filed a complaint with the Better Business Bureau.

In Baltimore, SUNplus has been in the crosshairs of anti-litter groups, neighborhood associations and the City Council for years.

Resentment over SUNplus deliveries cuts across racial and class lines, though the circulars do not seem to turn up in some higher-income city neighborhoods.

A quick Google search shows at least one local Facebook group called “Stop Throwing the SUNplus at Us.”

On the Sun’s own web page, one reader pleads, “My God, what does it take to stop this?”

Jody Thomas, vice president of communications at the Maryland Better Business Bureau, is familiar with consumers’ frustration with SUNplus.

“Typically, we take complaints about transactions, but you could file a SUNplus complaint with us,” she says. “Calling the local TV stations with your complaint is not a bad idea, either.”

There are even multiple angry tweets from former 11th District Councilman William H. Cole IV – now director of the Baltimore Development Corporation – begging the Sun to stop its delivery.

“This has to stop. Pretty Please?” Cole Tweeted.

In another Tweet, posting a photo of a SUNplus-littered block, he wrote: “This is shameful!”

Asked about the issue this week, Cole replied with an email that suggests he’s still pretty steamed about it:

“It is a sore subject for me because I never figured out a way to fix it. Just like you described below, it would improve for a while and then it would get sloppy again. I’ve opted out myself and yet every couple of weeks I get one. My neighbor opted out and he’s never stopped getting them. It’s just completely hit and miss. It was a regular topic at community meetings and, in a few cases, the Sun sent somebody out to talk about it. There would be improvement and then it would get out of control again.

“You should talk to Councilman Kraft as he was the driving force behind the initial flyer ban. Sun Plus doesn’t count, apparently, because they have an article . . . surrounded by a ton of advertisements. To me, it’s just litter.” 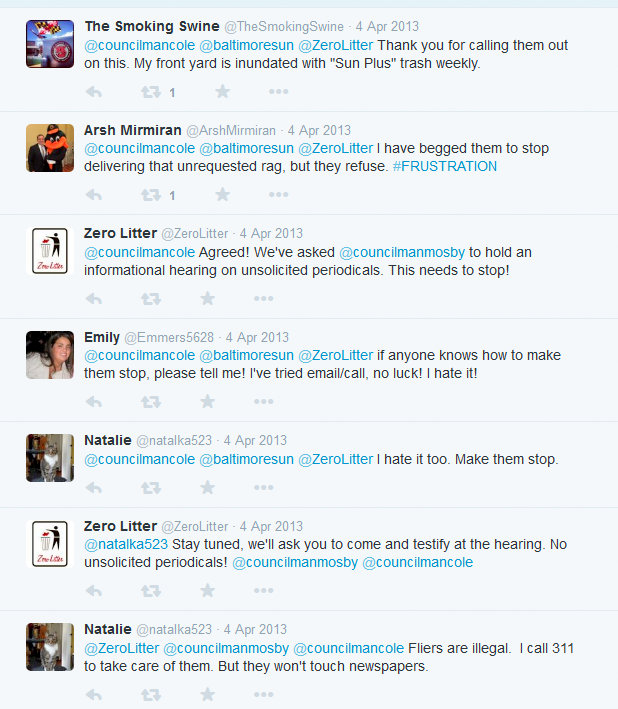