The mound of household junk and VHS tapes brazenly dumped near the Carroll Park Golf Course this week was so impressive and disturbing it made local TV news.

Flores, whose group monitors the health of  the city’s waterways, says the spot along the Gwynns Falls Trail is a well-known site for illegal dumpers.

Two years ago, Flores himself reported a dumping incident at the same location, just off of Washington Boulevard in Southwest Baltimore.

The culprits, he said, were Baltimore City employees.

“I saw a city dump truck unloading construction debris and then driving away,” Flores recalled. “Other city workers were riding in the cab of the truck.”

“When I drove up to the location to conduct our sampling fieldwork, [a worker] threw the last of the debris on the pile and took off down the road,” he said.

Flores took photos and reported the incident to the city. 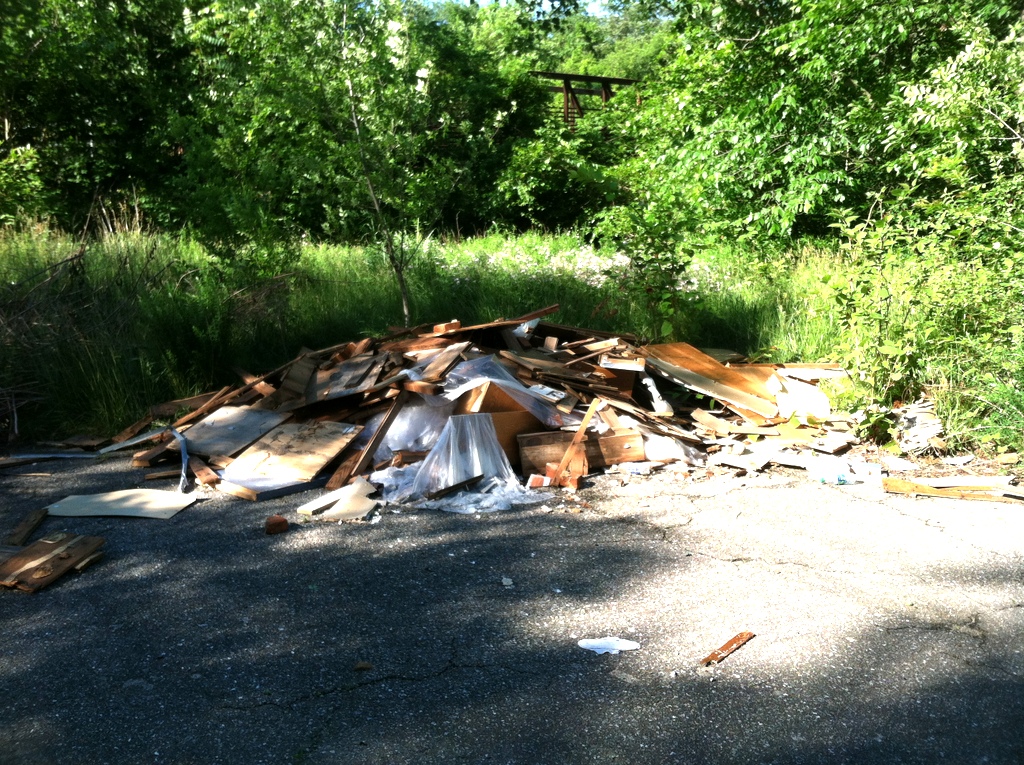 Construction debris, pictured here in 2013, was found at the very same location as the latest incident. (Photo by Blue Water Baltimore)

The report was acknowledged but Flores said, but he never was informed if the city workers were cited or even reprimanded.

“I never found out the outcome,” he said.

$16 Million to Clean Up Illegal Dumping

Jeffrey Raymond, spokesman for DPW, when asked about the 2013 incident yesterday, said, “Offhand, I don’t know the outcome of David’s report, but there is simply no way that activity would be acceptable.”

He added that such behavior was especially disappointing in light of the fact that city agencies had a multi-week clean up of the area around the same time.

If DPW has any additional response to Blue Water’s report, The Brew will post it. According to the agency, the city spent $16 million last year to clean up dumping outside of normal trash and bulk trash pickup. 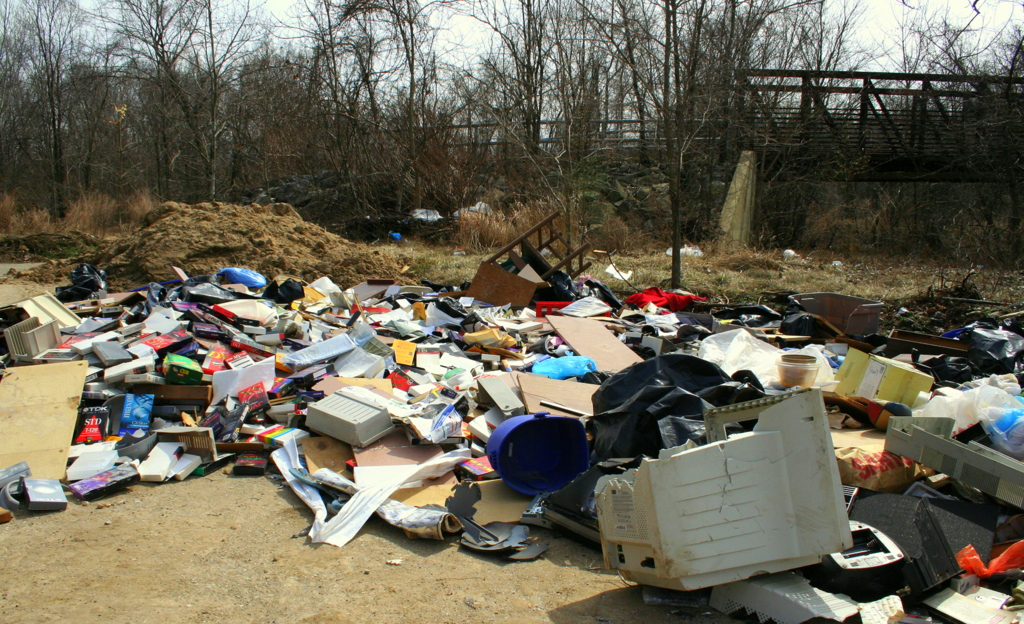 A view of this week’s dump heap with the same bridge shown in the Blue Water Baltimore photo visible in the rear. (Photo by Danielle Sweeney)

The latest Gwynns Falls deposit included a mountain of old VHS recordings, small furniture items, paint buckets, plastic bins, boxes, consumer electronics, computers and grocery bags from a defunct supermarket on the opposite side of town.

All were apparently discards from someone’s home office and TV room. “It looked like someone emptied out a house and dumped the contents here,” said Cheron Porter, spokeswoman for the housing department. “It’s unfortunate.”

Porter told The Brew that, to her knowledge, this is the first time illegal dumping has been reported at that location.

Code enforcement found out about the dump on Wednesday and responded immediately, Porter said. “We think it happened over the weekend. We have a few leads, but it’s too early to say if someone will be charged and with what crime.”

“Another pile, possibly from the same house, was found a little further deeper in the park,” Porter added.

Code Enforcement has not yet commented on the Blue Water’s assertion that dumping has occurred at the site before. 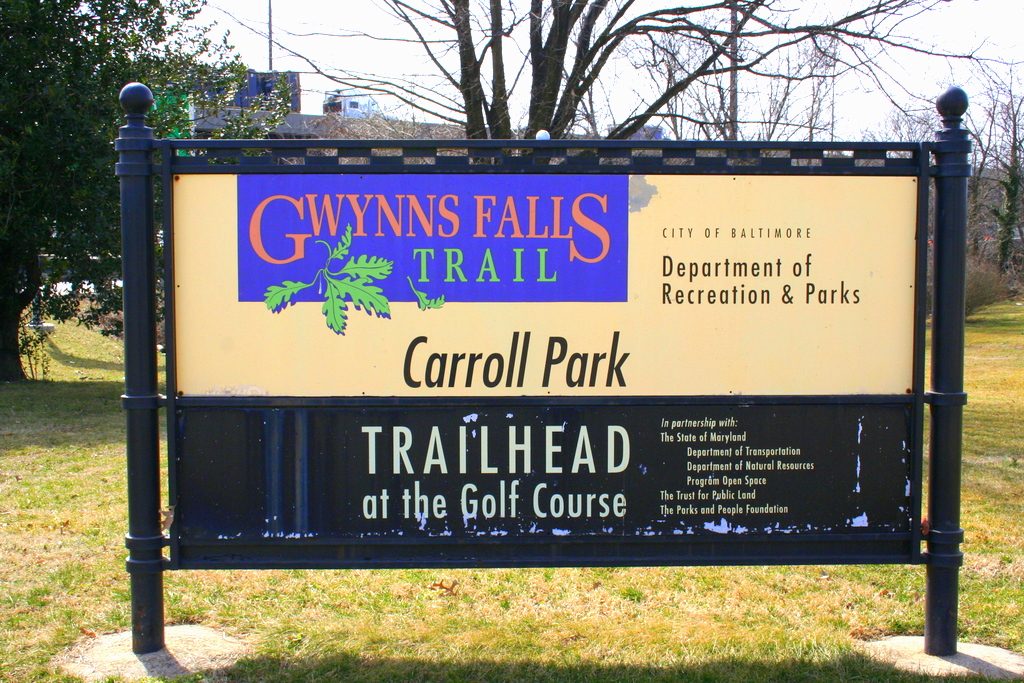 Sign for the Gwynns Falls Trailhead. (Photo by Danielle Sweeney)

Flores, who monitors dumping and environmental pollution around the city, wondered why the area hasn’t been cut off to private vehicles.

Specifically, he’d like to see a locked gate at the trailhead “as they have [done] throughout the rest of the Gwynns Falls Park and elsewhere throughout the city.”

He also wants to know why surveillance cameras haven’t been posted to deter illegal dumping. Code Enforcement posts cameras at other dumping “hot spots” and monitors the footage regularly.

Raymond, from DPW, promised that his agency would work with Recreation and Parks and Code Enforcement to control vehicle access to this part of the park.

“I really don’t understand why this hasn’t been done already,” Flores said.