Saying they are being asked to inspect too many establishments and fear for their safety going into dangerous neighborhoods, eight inspectors have signed a letter of complaint to the Baltimore Liquor Board’s executive secretary, Michelle Bailey-Hedgepeth.

“We believe that you fail to appreciate that we are liquor inspectors and not police and do not carry firearms,” the inspectors wrote in a letter dated March 13, which sources said was delivered to Bailey-Hedgepeth this week.

“We are constantly in fear for our safety at these late hours, as we are required to visit areas with well-documented high crime rates and without the ability to defend ourselves from physical harm as we attempt to carry out our duties as inspectors.”

One of the inspectors, who asked not to be identified by name, said the number of routine inspections they have been required to conduct has crept up over time to the point where completing them along with answering 311 complaints is not possible.

“It’s a personnel matter. I just can’t make any comment on it,” she said.

Chief Inspector Shelton Jones, however, told The Brew today that the letter represents disgruntled inspectors resisting efforts by him, Bailey Hedgepeth and Chairman Thomas Ward to reform the long-criticized agency.

“They want to go back to the old way,” Jones said. “They’re used to working lazy hours and not really doing anything about it when we say we want to make things better.”

Jones said he and Bailey-Hedgepeth have been working for weeks to address the issues raised by the inspectors.

He said that certain inspectors started complaining about problems in February and put the letter together in March. Jones attributed the letter being leaked on Twitter to “a troublemaker who does not want me, Michelle and the chairman to succeed.”

The liquor office has been under pressure since a harsh 2013 audit identified serious problems among the inspection staff, including poor record-keeping and inspectors failing to perform the required number of inspections – sometimes reporting that establishments were inspected when they had not been.

In their letter, the inspectors make the case that the current work schedule essentially overcorrects the problem.

“The current schedule Fridays and Saturdays, from 7 p.m. to 3 a.m. and Sunday – Thursday 3 p.m. to 11 p.m., violates the 2013 binding Letter of Understanding by and between the Director of Human Resources, the Labor Commissioner and the BLCC [Board of Liquor License Commissioners].”

Night-time inspections are difficult, one inspector told The Brew, and take longer because the staff has to deal with customers while inspecting the premises. 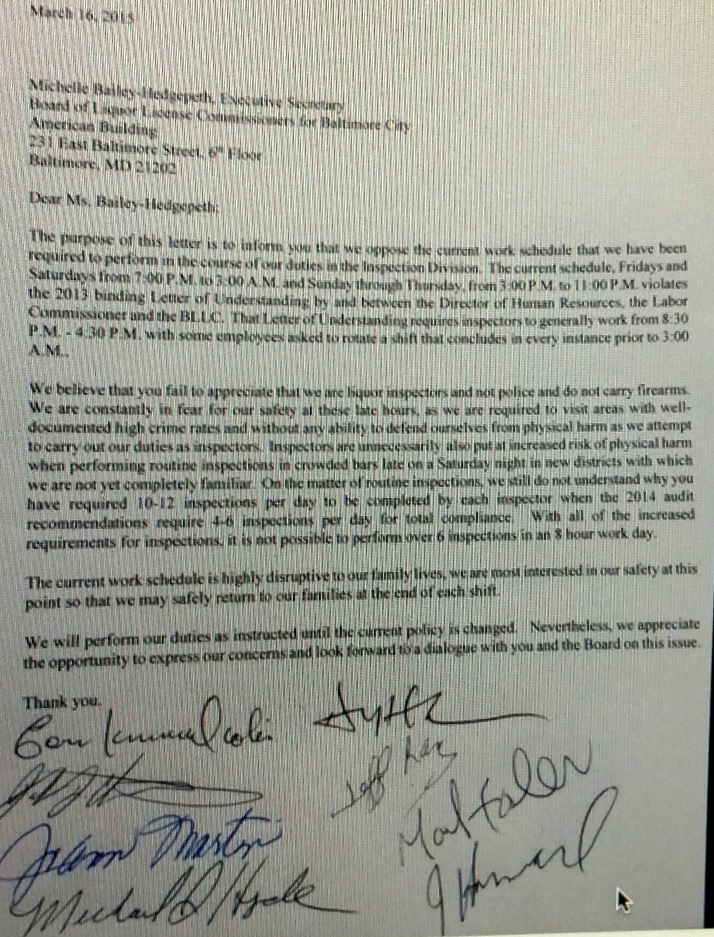 Copy of letter by liquor board inspectors posted anonymously. Several inspectors today confirmed the authenticity of the document.

The inspector said the office has also been deluged with 311 complaints, which he said were often “bogus complaints” about establishments that community members are targeting for closure.

“With 311s, inspectors are required to inspect each and every one within two hours.

“About 95% of the complaints are bogus,” he claimed. “We get there, and nothing’s going on.”

On the subject of too many night shifts, Jones said he is generally not sympathetic.

On the subject of late-night inspections to dangerous neighborhoods, Jones said he told inspectors not to go alone if they feel uncomfortable: “I told them go with someone else or in a group.”

He said “bogus” 311 complaints are not a serious problem. There are times when inspectors are called for bar fights that should instead be handled by police. There is one particular bar, he said, that has generated a lot of the complaints, adding, “We are working with 311 operators to see if there’s a way we can screen out those calls.”

Jones said he has offered to give the inspectors police radios and “quick contacts” for district police commanders to get any needed back-up, but “they didn’t want that.”

Asked if under-staffing is a problem, Jones said it was not, noting that two part-time inspectors are due to start work next month.

“I could run the office with what I have,” he said, “if they were cooperative.”

Rebecca Lundberg Witt, the watchdog liquor board blogger for the Community Law Center, said her first reaction to the letter of complaint was that it’s “kind of bold since some of them really weren’t doing anything.”

Witt said she does sympathize with the inspectors’ concern about schedules, but argued that evening inspections are essential.

“I would be crabby as well if my schedule changed from day to night,” she said. “But doing an inspection in the day will not give you the results you want if everything’s happening at night.

“Typically what’s happening is a noise complaint comes in at 10 at night and the inspector comes out at 11 the next morning. That’s just not right.”

The inspectors’ complaints about safety, she said, “says something about what these places are like for anyone.”