Explaining why management appointments are so late, Lisa Grillo, chief human capital officer, said “most of the turnovers were due to retirements or natural attrition.”

She said school officials did not get notice about some of the departures until this summer.

But school officials also sought to put some context on the announcement that the list of city schools without principals in mid-August numbered 10.

“Some years we’ve had [the list] bigger than this,” said Edie House-Foster, school system spokeswoman. “I can remember one year under [prior schools CEO Andres A.] Alonso when it was about 40.”

Current schools CEO Gregory E. Thornton, meanwhile, struck a similar note on the subject of teacher retention and schools without principals, saying, “We’ve done a great job of mitigating the challenge that we’ve had over the years dealing with a great number of vacancies.”

He touched on the issue at the end of upbeat remarks about the start of a new school year. 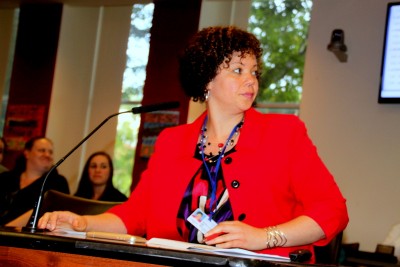 “Dr. Grillo and I hopefully will be able to bring back a final [list of appointments] somewhere around August 25 that would allow us the opportunity to really be positioned well so that we’ll have principals in our schools when our kids actually return.”

Grillo said finding a principal for each school requires following a “community engagement process,” which lasts anywhere from a few weeks to a month and the process doesn’t work if it’s done too quickly.

Most of the appointments were of principals or teachers already working in the school system.

Grillo said she did not have a list of the eight schools that were still without principals.

She noted that some of the recommended appointees are currently principals at other schools in the district, so these appointments will cause vacancies to open at the current school.

Grillo introduced the new principals last night, asking each to stand and be acknowledged:

• John Snowdy, Baltimore Collegiate School for Boys, a new charter school located near Govans. He comes from Friendship Public Charter in Washington, D.C., where he was middle school academy principal.

* Brandon Pinkney was previously approved by the Board to serve as managing assistant principal and since obtained certification to be principal at Southwest. It wasn’t deemed necessary to include him in last night’s Board action, schools officials said.

George Mitchell, president of the Langston Hughes Community Action Association, said that he will not appeal the administrative judge’s decision. But he said the community was sad to learn that its appeal to the State Board of Education had failed.

“They are disappointed about the closure and also frustrated that the kids will be moving around from school to school.” Mitchell said, speaking by phone this morning.

Transportation will be provided for students to the new schools they will attend – Pimlico and Arlington elementary schools – but the number of stops has not been determined, Mitchell said.

He noted that both schools are scheduled to relocate to Garrison Elementary in 2017 while the schools are renovated or rebuilt, and then return to Pimlico and Arlington for the 2018-19 school year.

“Why we couldn’t have kept Langston Hughes open for a few more years while the construction is done is beyond me,” he said.

Mitchell says he is lobbying for the Langston Hughes building to be used as a rec center, senior center, library or some other kind of community space.

“We are still having a back to school event at Langston Hughes,” he said. “Even though our school is closed. We’ll be giving out supplies and book bags on August 22.”