It’s been almost three years since voters approved a charter amendment requiring audits of 13 principal city agencies that haven’t had their books checked in decades.

How many audits have been released so far? If you guessed zero, you win a pair of green eyeshade visors.

According to the city charter, the Rawlings-Blake administration will be in violation of the law if it does not complete the 13 audits within the next 15 months when the current term of the mayor and City Council expires.

But has that looming deadline lit any fires under City Hall?

Councilman Carl Stokes, who pushed through the original audit bill, says he hasn’t heard a thing about audits since he held a hearing on the matter last year. “No one has debriefed me,” he says.

A June 2015 deadline was set for the first batch of audits.

After that date came and went, Raymond’s office downsized its promise from five to three audits completed by September 3.

With the latest calendar marker passing, Raymond told The Brew last week that two audits (Recreation and Parks and Transportation) were in draft form and are being reviewed by his office prior to being publicly released.

HJR: We have the final draft and it’s under review.

Brew: When will you release the audits to the Board of Estimates and general public?

HJR: When the review is complete and not a draft, and we will immediately be going to the board because that’s part of the process.

Brew: How long will that take?

HJR: Ah, I’m not sure. I’m in the process of reviewing the draft now. So as soon as I’m through with it. But it’s not an issue that we will review it and not issue it to the board.

Brew: Do you expect the review to be finished in a month or two weeks or somewhat sooner?

HJR: I would say in less than a month.

Regarding the third audit (of Raymond’s own Finance Department), that examination has been preliminarily wrapped up, according to Robert L. McCarty, the city auditor. 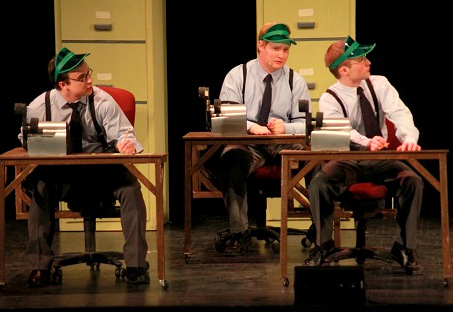 Actors as accountants at a performance of The Marques Playhouse in San Francisco. (themasquers.org)

McCarty’s office, which is is under the authority of Comptroller Joan M. Pratt, was handed $114,210 by the Board of Estimates to conduct the Finance audit last January.

Two other audits scheduled to be finished this year have not gotten underway.

A Police audit is scheduled to be completed by November 30, but the parameters of the audit are listed as “TBD” (to be determined), and the spending board has not yet authorized any funding for the audit.

The Public Works audit, first scheduled to start last spring and then rescheduled for last month, has not yet begun, according to on-line records.

In Councilman Stokes’ words, “We are supposed to be doing the second batch of audits, and obviously we don’t have the first batch done.”

At tonight’s City Council meeting, Eric T. Costello introduced a resolution calling for a public hearing on the tardy reviews.

Councilman Costello says he wants “a comprehensive update about the city’s progress towards meeting the charter requirement” with Raymond and McCarty, among others, providing testimony.

One aspect of the proposed hearing is to call on the Law Department to tell the Council if there will be consequences for the city violating the charter requirement.

If the answer is “no consequences,” it’s a safe bet that quite a few agencies will be audit-free when the term of Mayor Stephanie Rawlings-Blake is over.