City residents will be asked to approve $130 million in capital expenditures, from school construction to affordable housing to upgrades at the Maryland Zoo in Druid Hill Park, when they go to the polls next year.

Baltimore’s Planning Commission yesterday approved a request to place four loan questions on the ballot to fund a wide range of construction projects in fiscal years 2018 and 2019.

The loan package, called the 2016 Loan Authorization Program, is important because it would provide needed funds for housing and neighborhood revitalization, schools, parks, economic development and cultural attractions, among other uses.

In many ways, the package sets the city’s priorities for coming years – and limits the voters’ ability to veto specific items.

Yesterday’s meeting was the first look at the projects city officials want to support, starting in July 2017. The loan package still must be approved by the Board of Finance and other panels before it goes before voters, but such approvals are typically a formality.

The latest list marks a continuation of a change in the way the city asks voters to support capital improvement loans.

Until recently, the city often had a dozen or so loan questions and many of them were for single cultural projects, such as the Baltimore Museum of Art or the Maryland Science Center.

Starting with the 2011 election, the city had fewer loan questions and most of them supported a group of similar projects, such as “parks and public facilities,” rather than one individual project.

That trend will continue with the next election. There are no loan questions for single “marquee” cultural projects. Instead, 14 “cultural and entertainment” projects have been identified for funding if city voters approve a larger loan for community and economic development.

What’s more, no cultural institution would receive more than $250,000 under the proposed spending plan.

According to Sara Paranilam, division chief for comprehensive planning, the city wants non-profit institutions to raise the bulk of their funds for major capital projects from the private sector and other sources.

She said the city wants voter-approved bond funds to be used as a way to show the city’s support and help leverage those larger contributions from others, rather than pay for most of a given project as the city used to do.

Having fewer loan questions – the same amount of eggs but in fewer baskets – also gives the city more flexibility in the way it allocates capital funds, planners say, because funds aren’t  necessarily restricted to any one project.

“The idea was to consolidate the number of loan questions,” Thomas Stosur, director of the Planning Department, told The Brew. “Our reasoning is, we have a lot of different needs and. . . this gives us more flexibility, still within the confines of a category.”

In 2013, the Board of Finance adopted a debt policy authorizing the city to issue new debt for capital projects up to a level of $65 million per year. The current two-year plan adheres to those limits.

Each loan question must be approved by a majority of city voters before funds can be appropriated.

Such approvals rarely stir controversy. City voters have not rejected a loan question in more than 30 years, Stosur said.

The four loan questions are:

• $45 million over two years for “Parks and Public Facilities.” According to Paranilam, the last major wave of investment in public facilities was under Mayor William Donald Schaefer in the 1970s, and many of these facilities are now physically decayed and in need of major renovations or replacements.

This loan is intended to be used to renovate or replace existing public facilities and build new facilities as needed.

• $45 million over two years for “Community and Economic Development.” 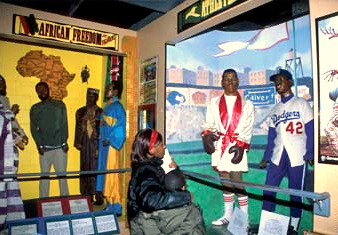 The Planning Commission approved $200,000 in bond funds for the National Great Blacks in Wax Museum. (magazineusa.com)

Money would be used for projects that support and promote efforts to revitalize and stabilize neighborhoods and support investment that retains and attracts jobs in the city and increases tax revenues.

The projects are typically proposed either by the Housing Department or the Baltimore Development Corp.

According to information presented to the planning commission, examples of projects in this category include fixing up Lexington Market, renovating the Inner Harbor, improving BDC’s business facade program, and tearing down city-owned properties.

The city would also sprinkle around $2.1 million of the above funds to 14 cultural and entertainment projects.

• $34 million over two years for “Schools.” This loan authorization is intended to supplement the 21st Century Schools Initiative, in which the Baltimore City Public Schools, City of Baltimore, State of Maryland and Maryland Stadium Authority are spending nearly $1 billion to renovate or replace 23 to 28 schools through other funding sources.

The bond money could be used for improvements to school roofs, windows, doors and mechanical systems, and to renovate or raze surplus school buildings.

• $6 million over two years for “Affordable Housing.” An Affordable Housing Fund would be set up to provide gap financing for development costs related to “the production and preservation of affordable housing.”