The Maryland Stadium Authority helped solve a big problem for Baltimore by providing a place to dump 60,000 tons of snow after the record-setting winter storm on January 23, but now it has a problem of its own.

When the snow finally disappeared, state officials discovered that one of the Camden Yards lots used to deposit snow was damaged so heavily by the city’s contractors that it is no longer usable as a parking lot.

Now, with the Orioles April 4 Opening Day game less than a month away, the city is scrambling to repair that lot and one next to it and has agreed to pay for the work to be completed – work that could cost up to $500,000.

“They have to be done by Opening Day,” said Philip B. Hutson, the stadium authority’s associate vice president for capital projects and planning.

Hutson and stadium authority executive director Michael Frenz said that the Baltimore Department of Transportation (DOT) has taken responsibility for making repairs and understands the urgency with the baseball season about to start. 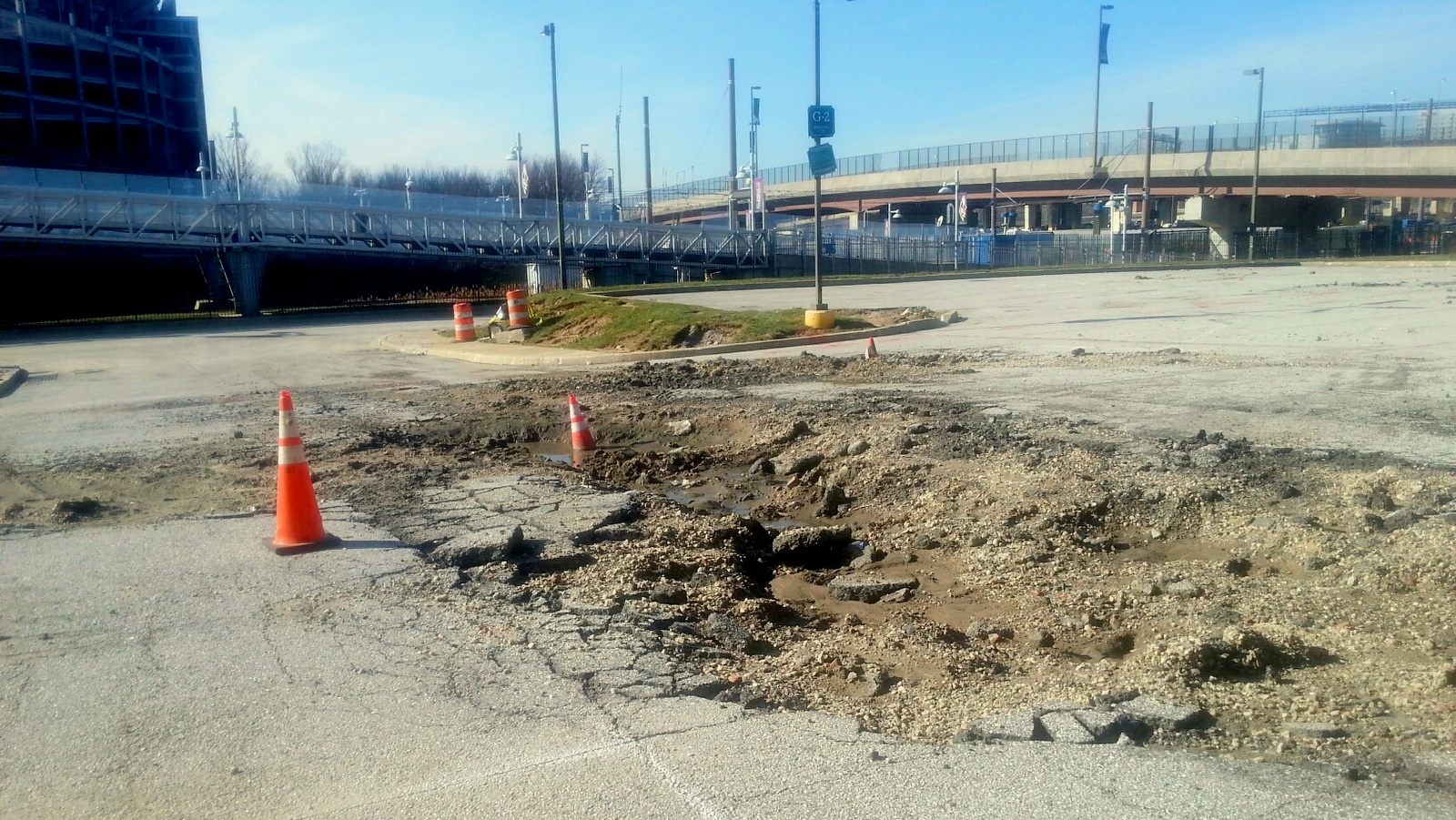 Craters left behind at the Camden Yards parking lot after snow from Baltimore’s record-setting January snowfall was dumped there. (Ed Gunts.)

DOT decided to use an on-call contractor, P. Flanigan & Sons, to do the repair work, so it wouldn’t have to spend time seeking bids, Hutson said, adding that the anticipated completion date is March 25.

Hutson said he does not have a figure for the cost of the work but he understands the city may seek reimbursement from FEMA, the Federal Emergency Management Agency, for the cost of repairs.

“They’ve committed and they’re working on it,” Hutson said. “The contractor started Monday. “

The state-owned parking lots that were damaged after the storm are Lots G and H. They are east of M & T Bank Stadium and partially under I-395, an easy walk to Oriole Park. 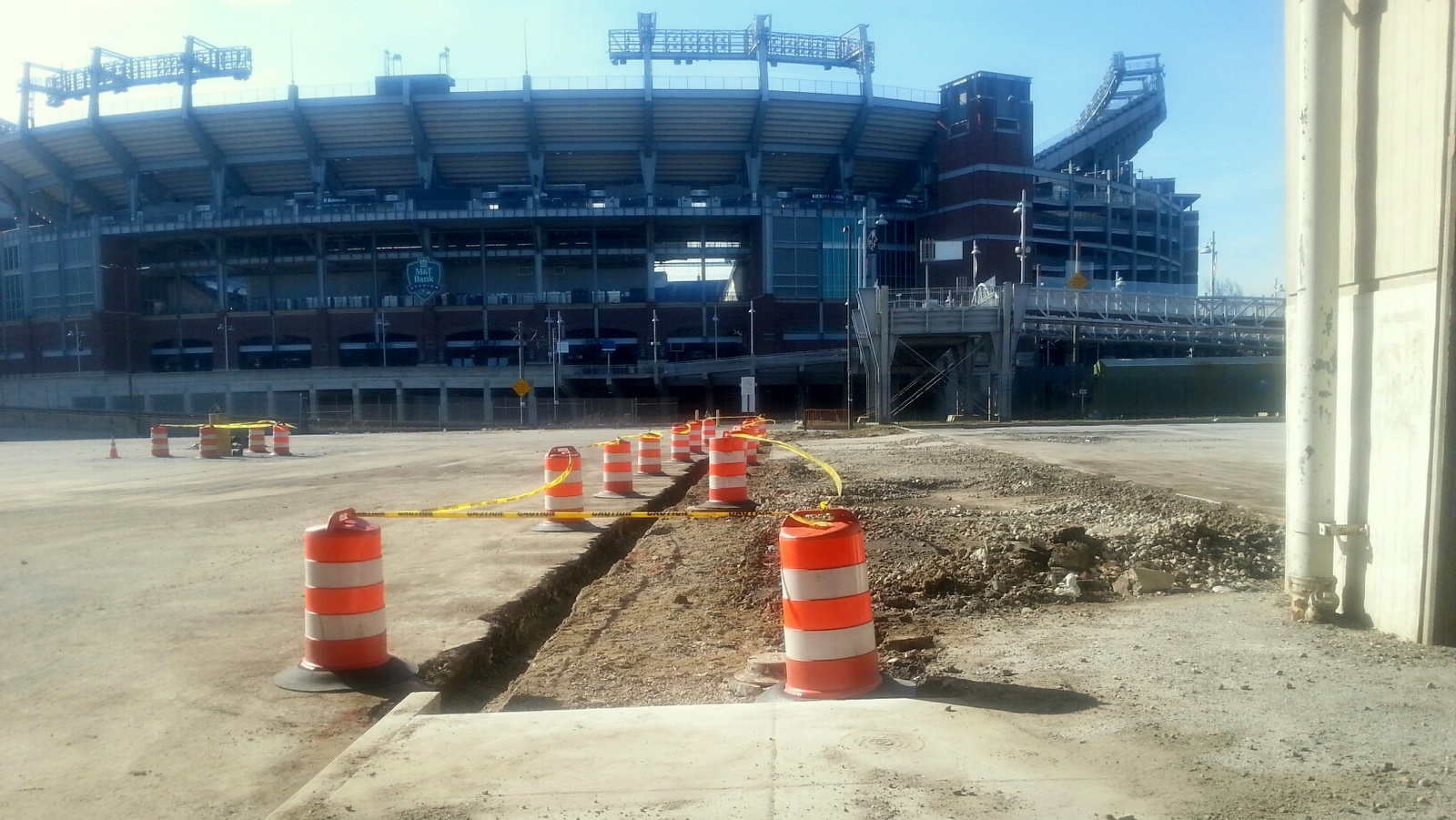 With Opening Day less than a month away, workers are repairing asphalt damage caused by snow dumped there following a severe storm. (Ed Gunts)

The state-owned lots are part of the 85-acre Camden Yards sports complex, managed by the stadium authority.

Lot G, which is out of commission, has 277 marked spaces. Lot H, which received less extensive damage, has 998 spaces. The entire sports complex has 4,600 parking spaces.

When the snow melted around March 1, state officials said, they could see that Lot G is unusable because of large craters in the surface and other imperfections that make the area unsafe to drive on.

One of the craters is more than a foot deep, enough to nearly swallow an orange traffic cone.

In addition, there are gouges and ruts in the pavement, broken curbs and damaged light poles. In other areas, the top surface of the parking lot was torn or ripped up by heavy equipment. Parts of Lots G and H have been blocked off with yellow caution tape.

Cost estimates for repairs have ranged up to $500,000, according to industry sources .

Next Time, a Written Agreement

The damaged parking lots see significant use throughout the year, according to state officials.  They are used for fans and employees during Ravens games, as recently as December, and for the baseball season.

And in January they were made available in the wake of the historic storm, which dumped more than 29 inches of snow in some areas.

Photos of the clean-up effort show a convoy of trucks on Ostend Street, bringing snow from city streets. At times, there were two or three truckloads per hour, officials say. 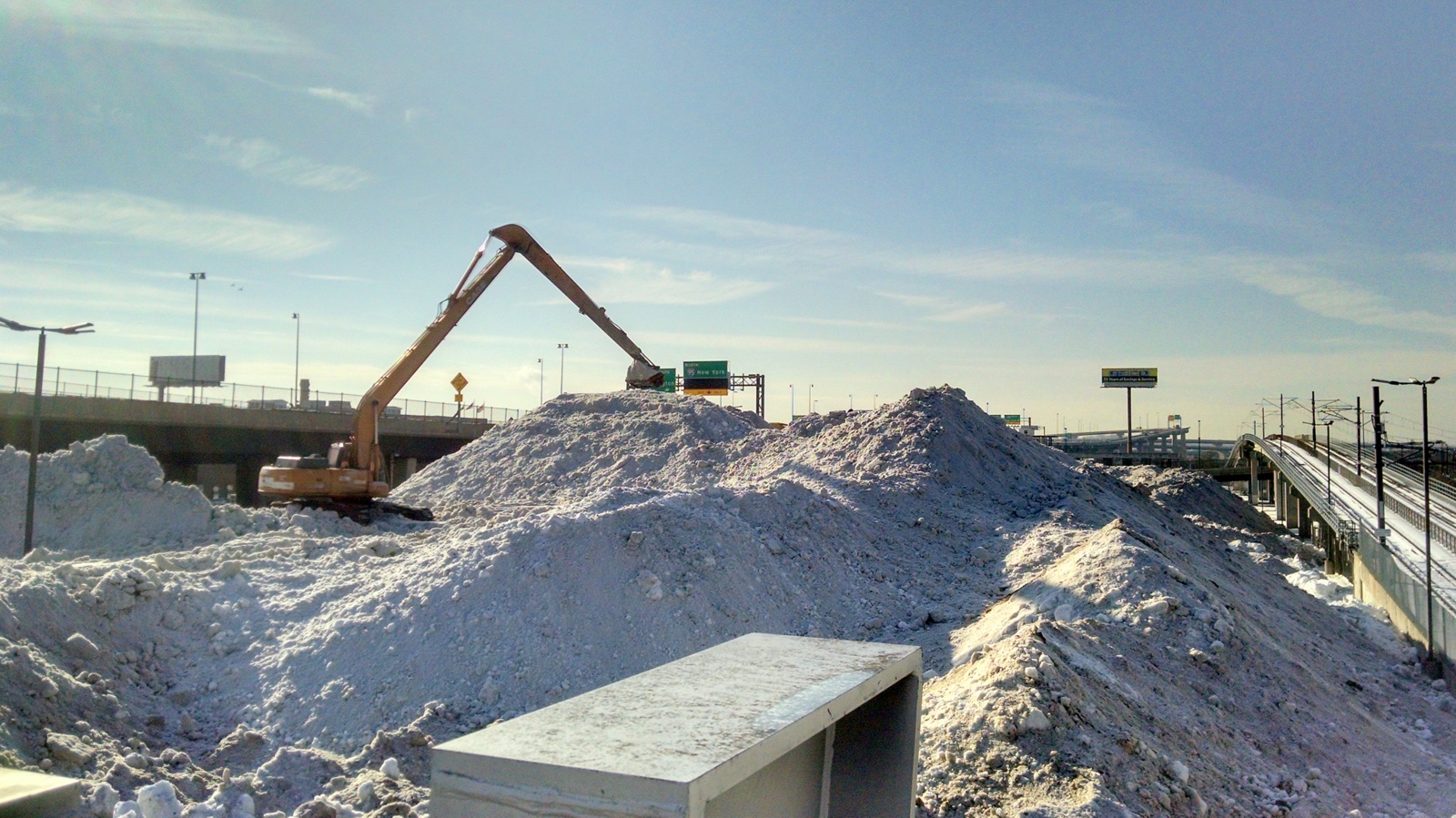 Snow piled between the stadium and I-395, visible behind the snow to the left. The Light Rail line is to the right. (Maryland Stadium Authority)

Officials attribute the damage to the intense use of the area by snow removal contractors who couldn’t see areas to avoid once the snow reached a certain height.

In an emailed response, William Johnson, city DOT director, provided The Brew with information on the repair plan and schedule, but did not say how much the work will cost.

The stadium authority has made Camden Yards parking lots available for snow removal in the past, during the 2010 “Snowmagedden” storm, for instance. But the city didn’t cause as much damage then as they did this year, state officials said.

Lot J used to be made available for city snow dumping, but that parcel is now controlled by the Horseshoe Casino.

Despite the damage and the rush to make repairs, Frenz said the authority likely would make its lots available for snow removal again. But next time, he said, “we’d probably want to have more of a written agreement in place.”

City officials reviewing Baltimore’s overall response to the storm at a City Council committee hearing yesterday said that any storm becomes more of a problem once the snow gets above 12 inches.

“Twelve inches is the threshold – it slows the city down enormously,” said Robert Maloney, director of the Mayor’s Office of Emergency Management.

Council member Bill Henry said the city should be candid with residents about clean up efforts.

“My concern is that …we were giving people false hope,” he said. “People were going online and seeing . . . that a snow plow had gone by three times. But then they would look out the window that see that their street hadn’t been touched.”

Another concern discussed was poor performance by snow removal contractors.

City emergency operations officials should meet with contractors in the summer for “training in and agreement to certain principles of positive plowing,” council member Mary Pat Clarke said.

She said contractors need to “avoid blocking entrances to adjoining streets and alleys when plowing a given street.”

Clarke also said they should “honor their contracts with the city by avoiding the recruitment of un-vetted vendor associates to operate as substitute contractors.”