If state and city election officials had really wanted to allow the public to watch their precinct-by-precinct review of the problem-plagued 2016 Baltimore primary, there would have been plenty of room.

The 88-year-old West Baltimore building where the review began yesterday behind closed doors, is practically the size of a city block, with metal cabinets standing in wide rows stretching seemingly to the horizon.

But today when reporters and a handful of candidates and their representatives were briefly permitted inside – following objections about locked doors yesterday – the gaggle was corralled into a tiny space at one end of the building.

All the  observers could really “see” was people at a distance seated at tables reviewing pieces of paper and election officials standing just inside the media-barrier answering questions and  looking grim.

“It’s a slow process. You’ll see a team to my left working through one of the precincts,” said Nikki Charlson, deputy administrator for the State Election Board, promising that the process would be completed by the end of the week.

Asked why the public was being given such limited access at the Voting Machine Warehouse at 301 North Franklintown Road, Charlson said there was “personal information on voters” in the material being reviewed. 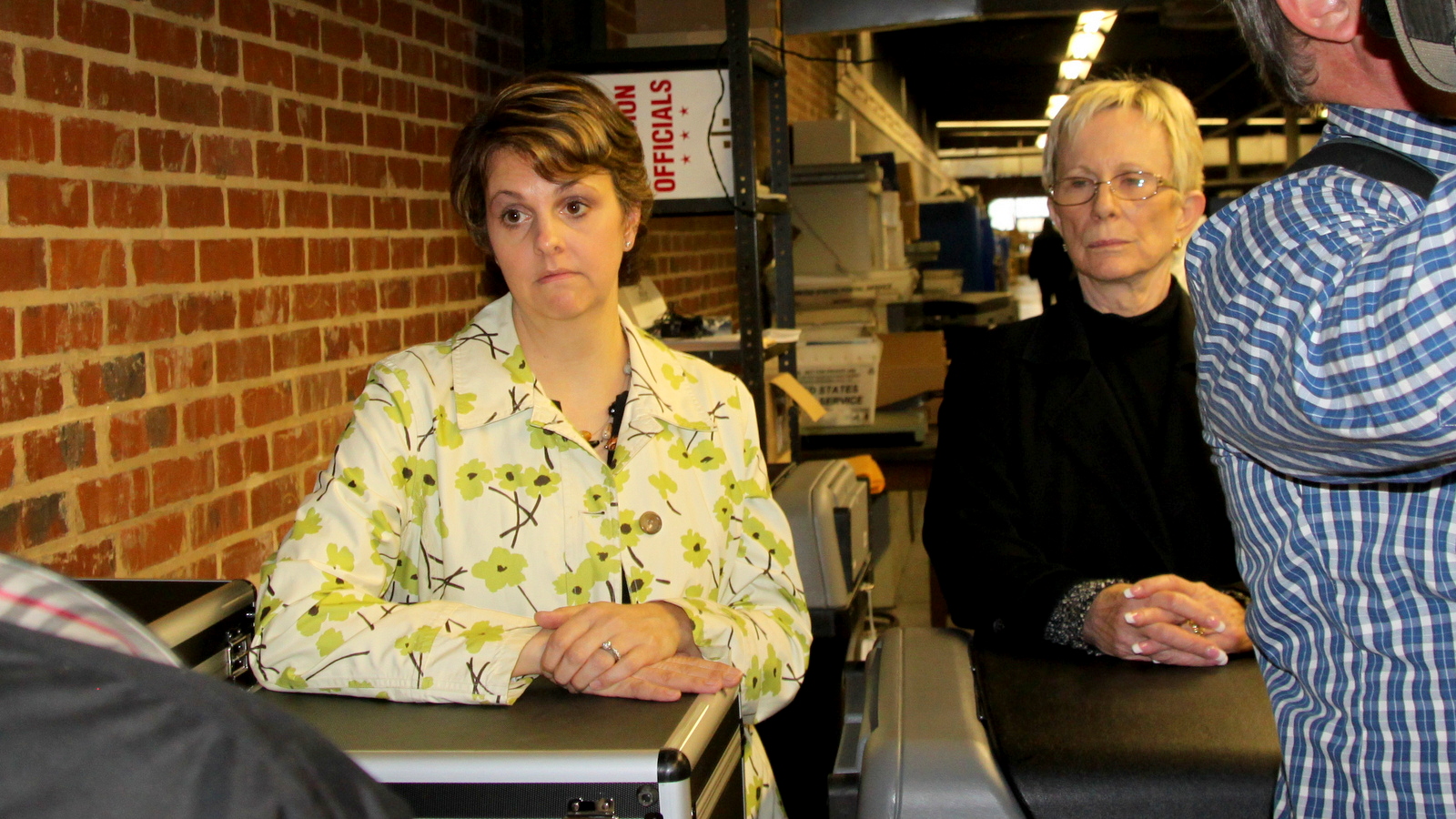 Nikki Charlson and Linda Lamone, of the Maryland State Board of Elections, field questions about the 2016 primary. (Fern Shen)

“We wanted to balance the need for transparency with the process of preparing and performing the reconciliation in this warehouse with all this material out here,” she said.

“No Scanned Votes to be Stricken”

State election officials last week ordered the city to rescind its certification of the vote citing multiple irregularities, including 80 provisional ballots that had not been counted and an unusually high discrepancy between the number of voters who checked in and the number of ballots scanned.

Much of Charlson’s time today was spent adjusting expectations and correcting terminology as the “reconciliation” process goes forward.

“There’s no ‘counting’ going on,” she said, noting also that the documents being reviewed include “pretty much everything but ballots.”

Charlson said they are focusing on about 60 problem precincts where the number of votes cast did not match with the number of Voter Authority Cards (VACs) that voters sign when they check in.

Today about two dozen workers from Howard, Harford, Anne Arundel and Baltimore counties, as well as Baltimore city, could be seen flipping through those “cards,” actually pieces of paper.

In addiction to the VACs, they are looking at provisional ballot applications, judges’ logs and printouts from the voting system, Charlson said.

Charlson was asked, what if there are scanned votes that don’t seem to correspond to voter cards or other data: would they be stricken?

Charlson said no, because “it’s a secret vote.”

“You can’t get the ballot out,” she said. “No votes scanned will be taken out.”

Asked if mistakes weren’t made by city election officials in the conduct of the April 26 primary, Charlson demurred.

“Afterwards we’ll work with the Baltimore Board of Elections to determine where some efficiencies can be found in the future,” she said.

Charlson was also asked if the reconciliation process will change the results of any races.

“It might change the results, but it is not likely to change the winners,”  she replied, noting that the roughly 2,400-vote gap between winner Catherine E. Pugh and 2nd place finisher Sheila Dixon would be a difficult gap to close. 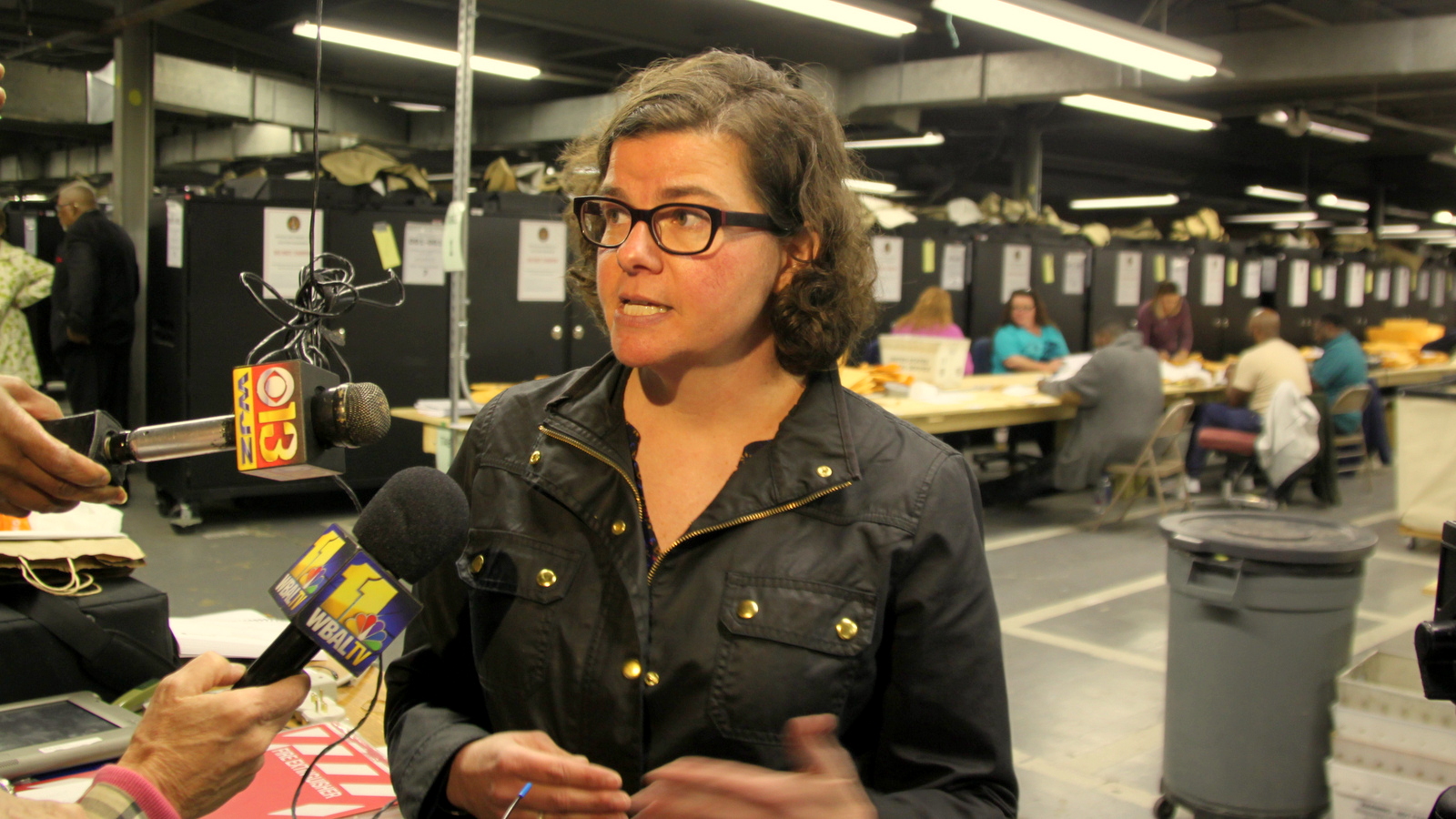 But Dixon spokeswoman Martha McKenna said her camp is gathering information and had not made a decision about what action to take.

McKenna said they were “frustrated” by the lack of information and disclosed that yesterday the Dixon camp filed a Freedom of Information request to get precinct-level data.

Once the results are re-certified, all the candidates have three days to file a request for a recount.

Other candidates who came to the Franklintown Road warehouse today noted that some City Council races were lost by a couple hundred votes or less and could have been affected by irregularities.

He said voters “were turned away all day” from the Langston Hughes Elementary School and told, incorrectly, that it was not a 5th District precinct.”

Fugett, a first time candidate, said he also encountered irregularities, including biased election judges and ballots “spilled out onto the street.” He said he had doubts about whether provisional ballots were handled properly in his district, especially for ex-felons permitted to vote under new legislation approved in Annapolis this year.

“I don’t think the city was really prepared for that,” he said.

“As for the review of the voting here today, I’m glad the state is getting involved,” Fugett said. “It’s not so much about a recount as whether we can have a reliable process in time for the General Election and in the future.”