Declaring “we’re going to up the protest ante,” longtime civil rights leader Helena Hicks and other residents of Northwest Baltimore met in a church last night to spell out just what they want from the city to address chronic basement sewage back-ups.

After years in which their area was neglected as the city spent $700 million to comply with a 2002 federal consent decree to fix its aging sewer system, residents want some assurances that the renegotiated decree will finally help them.

“If they can give millions to Harbor Point to build an infrastructure, they can certainly give some money to do the infrastructure that’s needed out here,” she said to about 30 people at Concord Baptist Church. “The city has the ability and the money.”

A separate fund, Hicks said, should be established to comply with the consent decree and be managed by the city comptroller who “doesn’t answer to the mayor,” Hicks added.

Derrick Lennon, a resident of the Glen neighborhood whose basement was flooded with waste from a city sewage line, said a separate fund would solve another problem.

“There’s been no transparency” about city spending for sewer upgrades so far, Lennon complained.

A compensation fund should also be established for damages incurred by sewage back-up victims, including retroactive payments for damages dating back to 2002, the group said.

Hicks said she and other residents drew up the list of recommendations knowing that the deadline for comments is approaching on the draft revised consent decree between Baltimore and the U.S. Environmental Protection Agency (EPA) and Maryland Department of the Environment (MDE).

The group wants not just funding earmarked from the new decree, but a more specific and sped-up timetable.

Residents – “most of them senior citizens on a fixed income,” Hicks said – have been faced with sewage-fouled basements and have replaced ruined furniture and appliances on their own with no help from the city.

Hicks and many members of the audience said they felt their concerns were dismissed by city officials at a hearing on the consent decree held earlier this month at MDE headquarters. 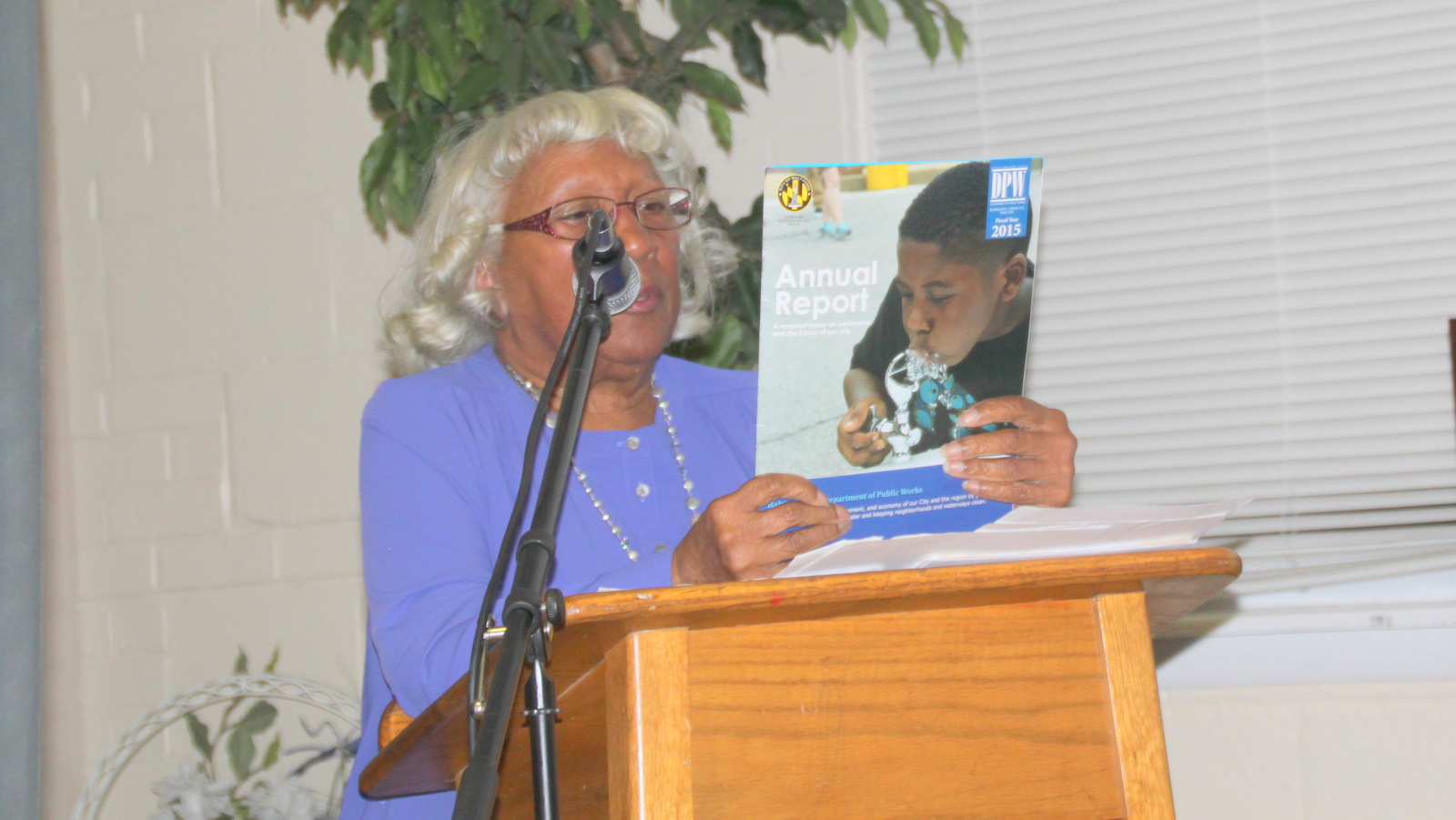 “They have the money,” Dr. Helena Hicks says, at a meeting of homeowners seeking more help from the revised sewage repair consent decree. (Fern Shen)

Hicks reviewed the history of flooding and sewage back-ups in communities like Grove Park, Glen, West Arlington, Forest Park and Howard Park, saying the problem dated back years, but has spiked recently.

In addition to not upgrading sewer lines in their area (“We have the same old terra cotta pipes!”), Hicks said the city has not compensated most of the homeowners hit with basement back-ups.

According to a December report by the Environmental Integrity Project, the city received 413 claims for damage caused by backed-up sewers between 2012 and 2015, but only 38 of them, or 9%, have been settled by the law department.

Last night, MDE Secretary Benjamin Grumbles came to the residents’ turf, sitting in the audience and, at one point, acknowledging their grievances.

Of the revised consent decree, he said, “We’ve put in some improvements, but obviously from your perspective there needs to be a whole lot more.”

Of the past administration of the decree, he said, “There has been some injustice and some inexcusable slippage.”

(Missing its January 2016 deadline, the city spent $700 million and tripled water and swer rates but completed less than half the work promised in the agreement it signed in 2002 with state and federal officials.) 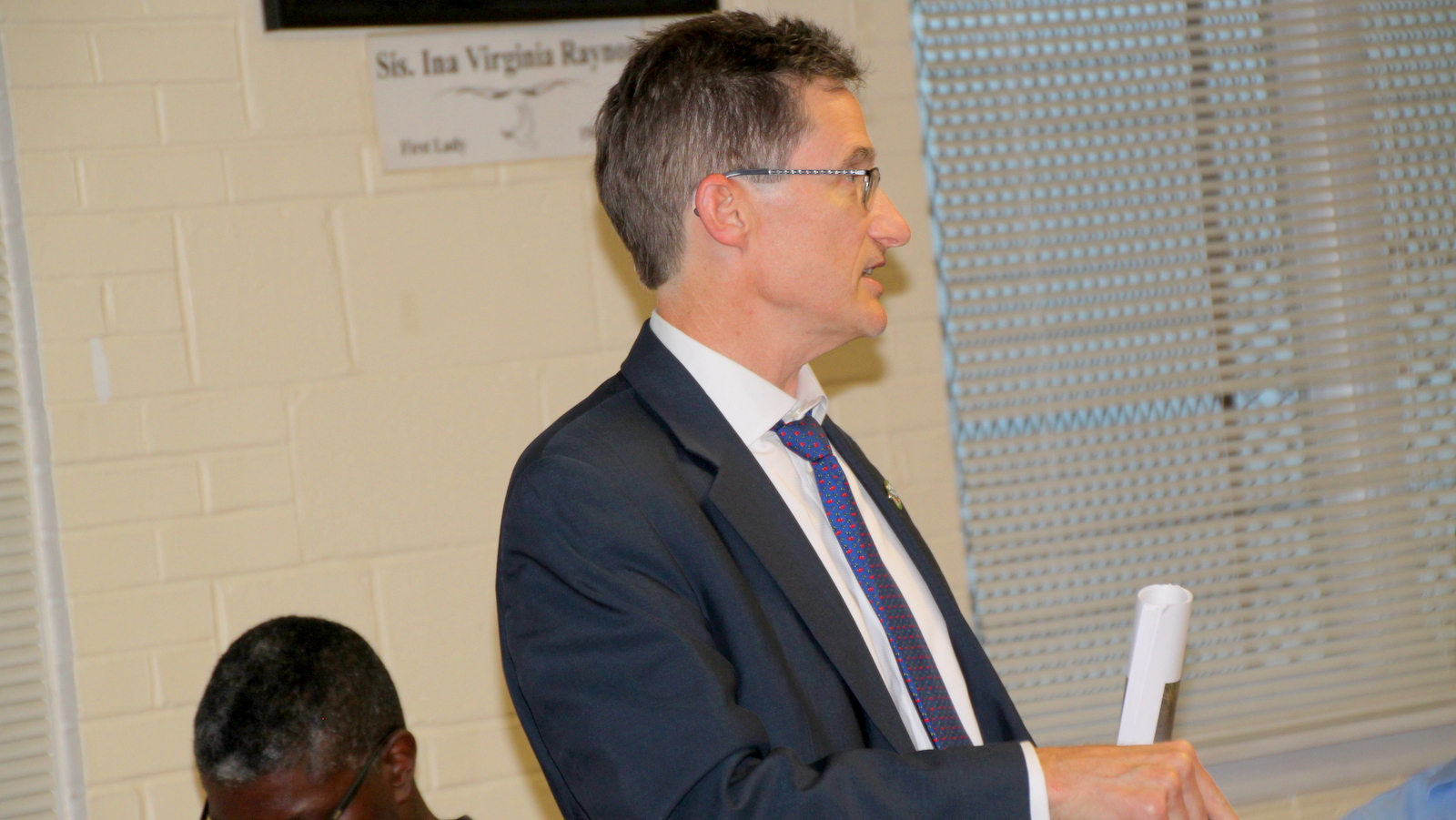 “This is a crisis,” Flores said. “We’re talking about sewage which is not just fecal contamination but also toxic chemicals in peoples’ homes. It’s been going on for years. It’s an issue where people don’t trust that the city’s even listening to them.”

Reading through the 91-page draft decree, Flores said it leaves unclear exactly when work will be done that would fix the area’s problems.

Flores, Hicks and activist Kim Trueheart told Grumbles they want to meet with the state and city and discuss their response to the comments before the court deadline to approve the decree is reached.

Flores and others last night agreed to be part of a residents’ advisory committee to negotiate improvements to the decree. Joyce Smith, of the Howard Park Civic Association, said Health Commissioner Leana Wen should be included, along with other city and state officials.

Another addition to the decree that the group is seeking is a better response by city agencies to sewage overflow incidents. Hicks described the response to one of them as “disgusting.”

“Here was the city Law Department out on a Sunday, knocking on the neighbors’ doors asking if they have bills to show how much they had spent for cleanup and also offering them the chance to sign a waiver that they would not sue them,” she said.

“City Admitted They Messed up”

Tom Pelton, author of an Environmental Integrity Project report on the city’s sewage system, offered another reason why residents should demand more help from the city – because the city has admitted to helping cause the back-up problems.

Pelton said a Department of Public Works official admitted to him that, by closing off known sewage overflow pipes, the city triggered more backups in private basements than would have ordinarily occurred.

“We didn’t really know the right order to do things in, necessarily,” Dana Cooper, DPW’s general counsel, told Pelton during an interview in her office last November.

“And so when we closed those other 60 overflows, that actually increased the number of basement backups that we saw in the city. Again, because the sewage has to go somewhere,” Cooper said, according to Pelton.

“They admitted they  messed up,” he said.

DPW had earlier reported that it closed 60 of 62 sewage outfalls as part of the 2002 consent decree.

In a story broadcast on WYPR, Pelton said that the department has since discovered another 13 outfalls “that it plans to keep open for sewage dumping for up to another six years.”