Asked today, on the eve of her departure as Baltimore’s mayor, what she might have done differently during last year’s civic disturbances, Stephanie Rawlings-Blake grimaced for a second, then replied crisply:

“Life isn’t fair. So fairly or unfairly, that is life. And I really don’t concern myself with what people’s opinion is. I was raised by someone who had a strong sense of self. My dad [the late Del. Howard Peters “Pete” Rawlings] didn’t care what anybody thought as long as he thought he was doing the right thing. I think some people are obsessed with this woulda, coulda, shoulda. That’s not how I live.”

To the reporter’s follow-up question – did her perceived failures during the disturbances lead to her decision not to seek re-election “as a lot of people said is what happened” – she flashed an even sterner look.

“A lot of people say a lot of things,” she answered before her press spokesman cut in and asked for a new line of questioning.

But Rawlings-Blake – who will be leaving office next Tuesday after assuming the reins of City Hall in 2010 after the forced resignation of Mayor Sheila Dixon – returned to the question herself a minute later.

She asked point-blank: “Anyone else want to ask me about my life’s regrets?”

A month ago, WYPR’s City Hall reporter R. Kenneth Burns got himself banned from the Wednesday press conferences after asking – as best anyone can determine – a follow-up question that the mayor deemed impertinent. (She sent a letter, embossed with the city’s golden seal, telling Burns that she “has declined her discretionary access” to him to attend the Q&A session.)

Nobody took the bait today to delve into the mayor’s regrets. Instead, WBAL-TV reporter Jayne Miller lobbed what would seem to be a pretty easy-to-answer query:

“Is there a definitive thing you can say about what you will be doing come December 7 other than taking a long-deserved vacation?”

“I don’t think so,” said Rawlings-Blake, other than relishing the prospect of vacationing “on Wednesdays” when the press conferences take place. (“If I were to say that I was going to miss getting up early to deal with the Board of Estimates” – also held on Wednesdays – “I would be lying,” she told her colleagues on the board earlier in the day.) 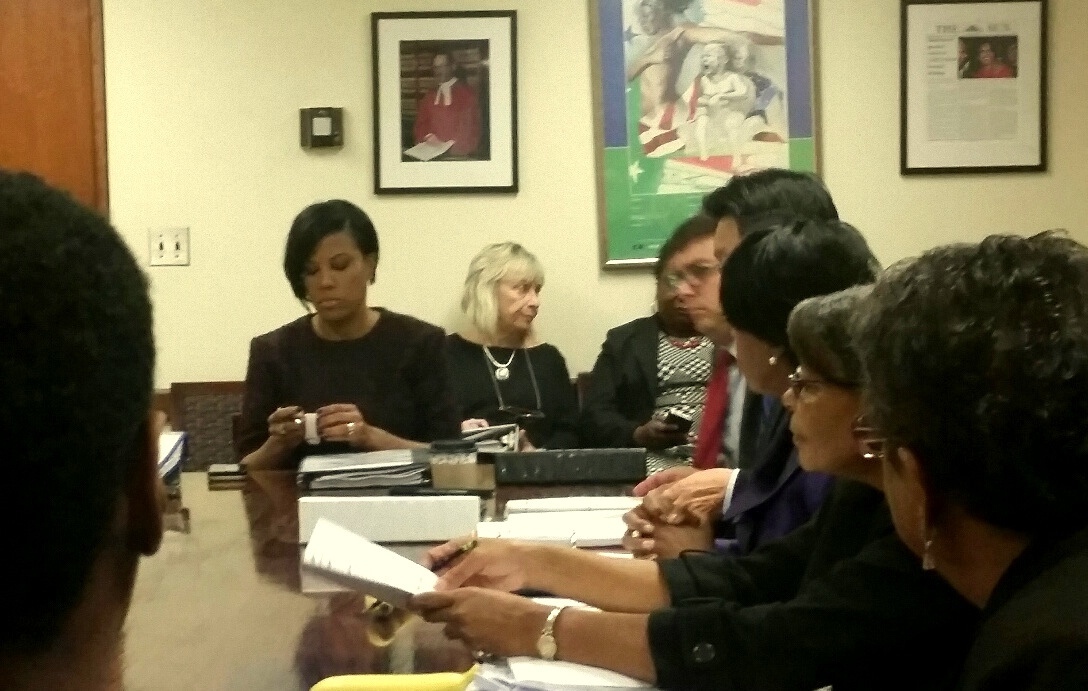 The mayor this morning at the Board of Estimates pre-meeting. (Mark Reutter)

“So what piece of advice do you have for Mayor-Elect Catherine Pugh?” asked another reporter.

“I have tons of advice,” Rawlings-Blake replied after a pause.

“What advice would you give her?”

“The good thing about Mayor-Elect Pugh is that I don’t have to give that advice publicly because we have a great relationship. . . I’m looking forward to her using the foundation that I laid in my administration and the momentum, the clear momentum, we have created to take the city to new heights.”

The next question offered was:

“What issue is there in the city that hasn’t gotten as much attention as maybe it should have that concerns you, that you’re worried about, when you think about Baltimore’s future?”

“Oh, I think you guys pretty much give a lot of attention to the problems,” she said. “Anyone else?”

With no further questions on the tips of anyone’s tongue, it was time for WBAL reporter Miller to speak.

“I’ve been covering mayors for a long time, and I just want to say that I think you’ve been professional and fair. I have seen you get really disrespected. To the extent I can apologize for that, for my industry, I do.

“I wish you well,” Miller continued, as the mayor solemnly peered down from the podium.

“I think you’ve been accessible. Don’t always like our questions, but–

“And you don’t always like my answers,” Rawlings-Blake injected.

The remark drew laughter from the room – and then a hint of a grin from the departing mayor.