Liquor licenses are renewed annually in Baltimore and citizens who feel an establishment has become a neighborhood nuisance can file what’s known as a “protest of renewal.”

Typically, a hearing is held, the licensee appears, usually with legal counsel. Those who filed the protest can, along with anyone else in the community, show up and testify.

In the end, the three-member Liquor Board almost always refrains from killing the license, instead perhaps shaking a finger at the licensee, very occasionally suspending a license or even chiding the protestants for failing to adequately document their complaints.

Now the board is supporting a bill giving it the authority – before the renewal hearing occurs – to order the licensee and the protestants to enter into mediation. It also empowers the agency to specify a particular mediator.

“The board views this as a tool created for increased communication and decreased confrontation,” said Thomas Akras, Liquor Board executive secretary, at a hearing in Annapolis Tuesday.

Commissioner Dana Petersen Moore, noting the Board’s current practice of holding meetings in various neighborhoods, said this bill and two others it supports “are informed by our many conversations with community and business associations from across the city.”

But community leaders and their advocates are calling on the bill’s sponsor, Sen. Joan Carter Conway, to withdraw it, saying it could have the effect of discouraging citizens from coming to the board for help with nuisance establishments.

“Mediators can cost $100-an-hour or more – a lot of people and associations can’t afford that,” said Becky Lundberg Witt, staff attorney at the Community Law Center, who writes the watchdog blog “Booze News.”

Karen DeCamp, who has worked on liquor issues for a decade as a leader of the York Road Partnership, says community groups already meet with licensees in hopes of working things out.

“We do talk to the owners – all the time! I think all the associations do,” she said, citing her community’s long-standing struggles with the Stadium Lounge tavern. “It’s not that the licensee for the Stadium Lounge didn’t meet with us – he did. The problem was he met with us in bad faith.”

“I think this bill may be a solution in search of a problem,” said DeCamp, director of neighborhood programs at the non-profit umbrella community organization, Strong City Baltimore.

One Day Warning for Hearing

DeCamp, Witt and others who follow Liquor Board issues closely said they were blindsided by the last-minute notice the communities got from the agency about the existence of SB-1087 and two other bills it is pushing in Annapolis.

Liquor Board executive secretary Thomas Akras sent emails about the legislation out on Monday – the night before the hearings on them were to be held.

“He has a huge email list. He could have sent that out a month ago!’” DeCamp said.

Video of the hearing, conducted on a day when the State of Maryland was under a state of emergency because of a severe snowstorm, shows a nearly empty room.

“I will share that we dropped the ball in broader engagement re the legislative package,” she said. “We will address that going forward.”

In addition to the protest-of-renewal bill, Conway also introduced SB-1122,  which allows those requesting a transfer of ownership the ability to apply for a single 180-day hardship extension.

A third bill, SB-1086, would remove any residency or voter registration requirement for almost all liquor license applicants. Current law requires at least one applicant to be a resident of Baltimore city.

That bill favors liquor interests and hurts residents, Joanne Masopust, president of the Fells Point Community Association, said on Facebook. “Residency increases the likelihood that they will be committed to the City and be concerned about the impact of their businesses on our communities,” she said.

DeCamp is “agnostic” about the measure, acknowledging the requirement is routinely circumvented anyway.

“It’s a bit of a ruse, a bit of a scam, in practice, and everyone knows it,” DeCamp said.

Out-of-town bar or restaurant owners typically find a local city resident, often with no ownership or real ties to the project, to lend their name as a co-licensee.

(In the video above, at about the 11:50 mark, one of the commissioners asks the silent woman in the sweatshirt who she is and attorney Stanley Fine explains that she is “the Baltimore City taxpayer resident on the license.” She acknowledges that her name is on two other licenses. “We see your name a lot,” then-chairman Stephan W. Fogleman says, with a grin.)

The mediation bill has stirred up an online firestorm, drawing support from among those who see community associations as obstructionists or worse.

“The tactics used to combat egregiously bad liquor establishments before the Liquor Board are just as easily used against any venue that neighbors don’t like,” said LGBT activist Brian Gaither. “I’ve seen it happen with two gay bars, The Eagle and The Drinkery.”

Gaither said he thinks the outcome in those cases would have been different under SB-1087 and SB-1122.

DeCamp said online threads that have spiraled into broad attacks on community associations go too far: “I don’t like to have my motives impugned.”

Conway, speaking about the bill in committee Tuesday, said her aim was to give the agency the authority to order mediation that could persuade protestants to drop their protest and agree to an MOU.

“They might initially come in opposing renewal but by the time that all of the parties get together they will come up with an agreement that you can’t sell ‘shorties’ and you can’t sell miniatures and you have to close at a certain time,” she said.

DeCamp said giving the Liquor Board the power to dictate mediation may seem reasonable to the current commissioners, but “has the potential for abuse by future boards.” 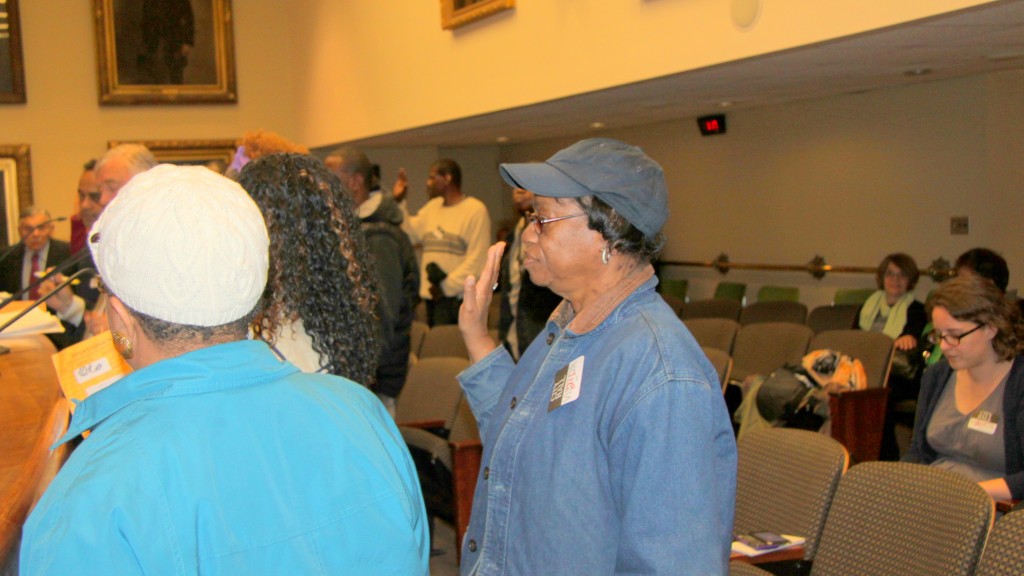 A liquor store in their neighborhood was a chronic source of loitering, drug-dealing, trash, the sale of loose cigarettes to minors and other problems, these women from Douglas Homes told the Liquor Board at an April 2014 hearing. The commissioners ultimately allowed the license to be renewed. (Fern Shen)

Witt said the bill represents a fundamental misunderstanding of the purpose of renewal hearings.

In a Community Law Center statement opposing the measure, she said under state law the filing of a protest triggers an investigation by the Liquor Board through a hearing, not a legal battle between two parties.

The filing of a protest, she said, “does not confer any special standing upon the protestants.”

“What they’re doing with this bill is abdicating their responsibility and putting it all on the communities,” “she said. “It forces citizens to undertake this time-consuming, expensive process that they then have to monitor and enforce themselves.”