Strewn in streets and alleys. Dumped in a landfill. Burned in an incinerator and, ultimately, inhaled by residents.

About 20% of Baltimore’s residential trash is recycled. That’s extremely low compared to the 35% national average for cities. Some jurisdictions have achieved 50% and 60%. West Coast cities including Portland, San Francisco and Los Angeles have reached even higher levels.

In Charm City, what doesn’t get recycled ends up in some not-too-charming places, including the aging Wheelabrator Baltimore waste-to-energy incinerator, locally known as BRESCO.

But a decision point is looming: the city’s contract to send trash to BRESCO is set to expire in four years. Continuing to use the incinerator means expanding the Quarantine Road Landfill, which is approaching capacity and accepts the incinerator’s ash, as well as residents’ solid waste.

Could Baltimore choose not to renew its contract with Wheelabrator? And could it find other ways to make its refuse go away so citizens aren’t submerged in an ocean of their own garbage?

The answer to those questions is “yes.” Cities across the country – and not just San Francisco! – are steering away from incineration and landfills and a throwaway culture.

They have invested in recycling and composting, subsidized operations that refurbish furniture or old computers for re-use and passed laws to dis-incentivize chucking everything including recyclables into the garbage can or roadside.

When Worcester, Mass., for example, began its “pay as you throw” program in 1993, the recycling rate increased from 2% to 38% in the first week. It has continued to increase and now sits at 43%

Could Baltimore be poised to move in this direction? The City Council recently approved a resolution to begin the process of discussing formal adoption of a Zero Waste goal, a promising but very preliminary step.

What Other Cities do

My organization, the Institute for Local Self Reliance, has been working with the Baltimore Office of Sustainability to prepare a plan for city-wide composting which would keep food and other organic material out of the waste stream. 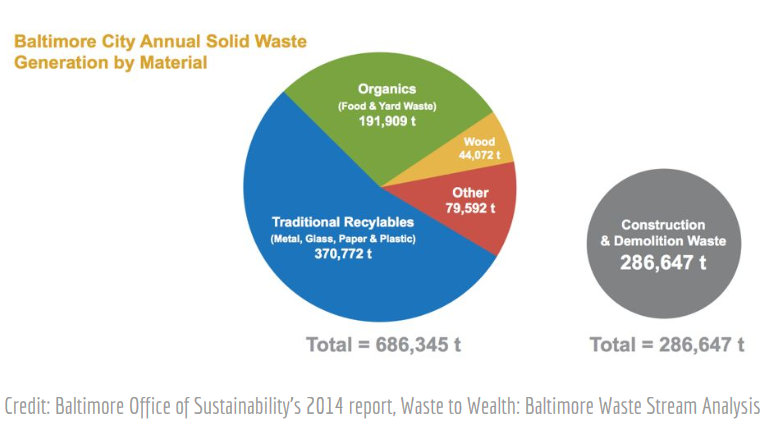 We believe this city could institute a program that includes backyard and community-scale composting plus two facilities scaled for commercial and household food discards and yard debris.

Baltimore could, for example, emulate Toronto which has co-collection of garbage, recyclables and food discards with one truck a week. Or look to New York City which now has over 250 community scale compost sites.

CERO, based in Dorchester, MA. collects food waste from restaurants and grocery stores and turns it into compost. In Baltimore, some community scale composting is already taking place at places like Real Food Farms and the Filbert Street Garden.

Here are some other examples of alternative, more sustainable strategies for dealing with Baltimore’s solid waste (from our report, “Why Baltimore Should Recycle More.”)

• Begin charging households for collection based on the amount of garbage set out each week. Under this “unit pricing” garbage collection system, offer recycling collection for free and provides free wheeled recycling carts to households.

• Pass an ordinance that requires a bond from the demolition and construction companies for permits. The bond is returned to the company when it proves that it deliver 50% of the materials to a processor that recycles it. Some jurisdictions require 75% diversion of C&D materials.

• Require in-city processing of recyclables and compost-ables to keep jobs in the city and get better market prices for these materials once processed. Alachua County in Florida (where the city of Gainesville is located) has built its materials processing facility adjacent to a resource recovery park that will include companies that want the raw materials for new product manufacturing.

• Develop a reuse hub for refurbishing consumer products such as cars, appliances, furniture, mattresses, computers, books and textiles. The reuse hub set up in Lane County in Oregon by the Society of Saint Vincent De Paul has created over 500 jobs. In Upper Marlboro in Maryland, eWorks operates an electronic scrap refurbishing joint venture with Melwood, providing job opportunities for people with disabilities.

• Ban products that cannot be recycled easily such as polystyrene food containers,  and plastic bags, as Los Angeles, Seattle, Portland and other cities have. (State and city efforts to enact restrictions have so far failed in City Hall and the Statehouse.)

• Phase out use of the BRESCO incinerator for non-recyclable materials. The city should, at the same time, prepare a plan for long term rail haul to regional landfills including western Pennsylvania and eastern Ohio and southern Virginia.

• Support and replicate social enterprises already operating in the city. These include deconstruction and resale operations such as the Loading Dock, Second Chance and Humanim, which are models for reuse and employment of hundreds of Baltimore residents.

Saving the Planet – and a Buck

So while these moves towards Zero Waste may help the environment and improve public health, do they make economic sense? I would argue they do.

Incineration in Baltimore currently costs $50-$55 per ton. With tightening federal pollution control requirements, Wheelabrator may have to invest up to $70 million in air control equipment, potentially increasing the costs passed on to the city.

The city’s current costs for recycling, meanwhile, are about $20 per ton, leaving plenty of room to grow these savings. The relatively simple measures we have outlined can double the recycling rate and more within to years.

There’s an employment benefit as well.

In combination, these state-of-the-art steps could, we estimate, create 500 jobs within a two-year time frame.

Saving tax dollars, generating jobs, diverting trash from the landfills and smog from the air — the benefits of investing in these strategies are vast.

There’s no reason why Baltimore can’t follow the lead of cities like Los Angeles, Portland, OR. or Worcester, MA. The only difference between those places and Baltimore is that they had a mobilized citizenry that demanded new rules that favor recycling and composting over wasting.

It remains to be seen if the stimulus from the Curtis Bay residents who stopped a proposed 4,000 ton-per-day incinerator is the spark to galvanize Baltimoreans.

I hope it will be. This is a moment when Baltimore could wake up and smell the opportunity it has been, literally, throwing away.

Neil Seldman is co-founder of the Institute for Local Self Reliance and director of its Recycling and Economic Growth Initiative, which has been working for several years in Baltimore with community organizations and city agencies. He specializes in helping cities recover more materials from the waste stream and add value to the local economy by processing them. manufacturing new products.