More than 30 workers abruptly left their jobs at a southeast Baltimore restaurant, BoatHouse Canton, yesterday after management informed them that federal immigration officials had requested employment files, according to an announcement by co-owner Gene Singleton.

“Late Thursday, the Immigration Division of Homeland Security delivered a request requiring all employment files be turned over in order to review I-9 immigration documentation,” Singleton wrote in an announcement posted on Facebook.

Singleton said the restaurant was in compliance with the law but that workers were afraid.

“Based on our government’s current practices of targeting the Hispanic Community, properly documented and potentially less than properly documented [people] are all fearful of being separated from their families, many with small children,” the announcement said.

“Many went home to pack up and leave,” Singleton wrote. “This was a sad, emotional, tragic event.”

Homeland Security officials could not be reached today for comment.

Following the departure of the “back of the house” staff, the popular waterfront eatery closed for several hours yesterday.

“The other 90+ of our employees and managers rallied,” Singleton wrote.

Today the restaurant and bar, the Waterfront Grille, were open with a limited menu, accepting reservations but turning away walk-ins.

General Manager Christopher Golder, pulling double duty in the kitchen, said the staff and management were doing their best under trying circumstances.

Golder said the management has followed employment law (“We’ve been doing things on the up and up”), but that workers were understandably frightened.

“When you have people who see a government they’re not trusting, they’re going to do what they think they need to do,” he said in a phone interview. “I hope after the dust settles they can come back.”

Meanwhile, the Boathouse has established a fund called “Heart of House” to support the displaced workers.

“A portion of Boathouse sales and all donations” will go to the fund, the restaurant said on its Facebook page.

Golder said management and staff are happy to do it. “We support them. They’re good people,” he said. 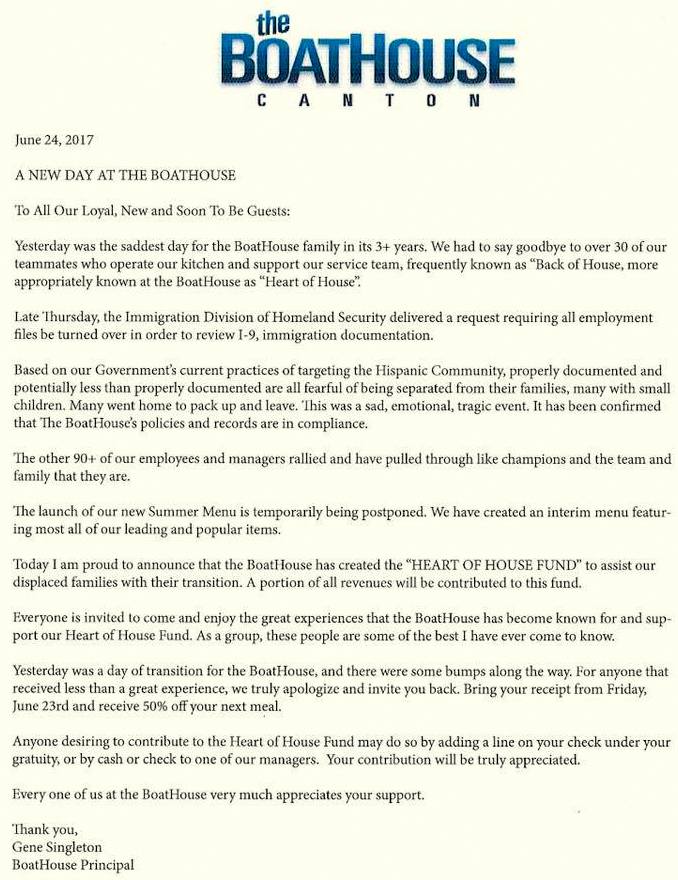 Meanwhile, the announcement has blown up on the restaurant’s Facebook page into a mini-debate on the immigration issue.

“Enforcing the law is not hate. I will never patronize your establishment again,” one person wrote. Several said they were skeptical that the establishment was following the law.

Others, meanwhile, praised Singleton (“Class act, Gene!”), with some calling his critics cruel and several describing them as unrealistic.

“For those who ‘aren’t patronizing this restaurant again’ because of their hiring of undocumented workers,” he wrote, “have fun finding a restaurant in Baltimore who doesn’t do it. Have fun at McDonald’s.”