Amid the passionate debates and demonstrations over Confederate monuments in Baltimore, Mayor Catherine Pugh kept it simple today: “If the mayor wants to protect public safety and keep her community safe, she has the right to do so,” Pugh told reporters hours after she removed the four monuments unannounced.

“I don’t know why they [the monuments] were put there – I wasn’t here at the time – but I do know they’re offensive to many people in this nation,” she said, facing local and national reporters at City Hall.

The monuments are now at an undisclosed storage location, their pedestals left standing in four locations (see below).

Her advice to other mayors considering moving their Confederate monuments: “Do it quietly and quickly.”

For deeper thoughts on the place of such monuments in America’s history, Pugh pointed to New Orleans Mayor Mitch Landrieu’s well-regarded speech earlier this year when that city removed its Confederate monuments.

“I felt there’s been enough grandstanding, enough speeches that have been made. Get it done,” Pugh told reporters.

Brandon Scott: “We Thank the Mayor”

Pugh had been under fire for appearing to move too slowly on the issue, which erupted into an international story on Saturday after Confederate sympathizers and neo-Nazis clashed with counter-protestors over a statue of Robert E. Lee in Charlottesville, Va.

On Monday morning, Pugh pledged to remove Baltimore’s statues, but said it would “take time” as her administration examined legal requirements, public funding, private funding and other matters.

On Monday evening, the City Council defied her wishes and unanimously passed a resolution calling for “the immediate deconstruction of all Confederate monuments in Baltimore.”

“The Council acted as we thought we should to move the issue along,” he told The Brew, “and we thank the mayor for her swift action and great leadership in removing the monuments.”

Asked what propelled her shift to action since Monday, she responded, “I didn’t start yesterday,” pointing out that she had been in  conversations with Mayor Landrieu at the U.S. Conference of Mayors meeting in June.

She deflected questions about whether citizens’ threats on the web and elsewhere to take down the statues played into her decision.

Only marble pedestals remain at:

• The Confederate Soldiers and Sailors Monument at Mt. Royal Avenue near Mosher Street.

• The Roger B. Taney Monument at north end of Mt. Vernon Place.

• The Lee and Jackson Monument at Art Museum Drive and Wyman Park Drive opposite the Baltimore Museum of Art.
_______________________________
And when reporters pressed her on when she decided to remove the statues, she at first expressed uncertainty.

“Monday or Tuesday. I’ve been up since 5 o’clock yesterday morning,” she noted. The spokesman later confirmed that the decision was made Tuesday morning.

Many other questions remained unanswered today.

On the cost of removing the statues, Pugh said that she had “no idea.” On Monday, the mayor noted that removal and storage of the four statues in New Orleans had cost $2.1 million, a large portion of which came from police overtime. 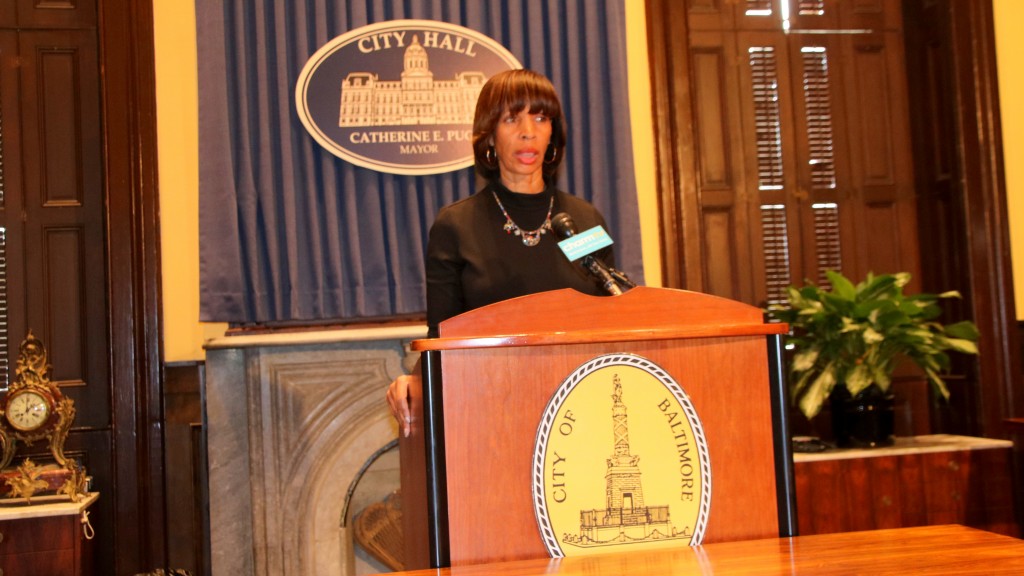 Mayoral advice to other cities considering moving their Confederate monuments: “Do it quietly and quickly.” (Fern Shen)

Whiting-Turner was the contractor hired to do the work. Using cranes, they placed the statues on trucks and drove them off, with police escort.

As for where the monuments have been taken, Pugh declined to say, citing fears that they might be defaced or vandalized.

“The monuments are stored in a city-owned secure location and are not slated to be destroyed,” said Eric Holcomb, executive director of the Commission for Historical and Architectural Preservation (CHAP).

Holcomb’s remarks came in an email today to members of the commission, which had been scheduled to hold a special hearing on the matter in September.

Asked what will happen to the monuments next, the mayor said the city is looking for someone to take them.

“There are a lot of Confederate cemeteries here and across the nation,” she said.

Reporters trying to understand Pugh’s decision to whisk the statues away got a clue when one of them asked her again when she made it.

“As soon as I knew they were easy to move,” she said.