Unbeknownst to most Marylanders, many industrial facilities are polluting state waters and the Chesapeake Bay with their stormwater runoff, while also threatening the health of neighboring communities, says a new report by a pair of environmental groups.

More than one-third of the Maryland facilities that reported their stormwater discharges from 2014 to March of this year exceeded pollution limits for potentially harmful chemicals, according to records reviewed by the Center for Progressive Reform and the Environmental Integrity Project, both Washington-based nonprofits.

Most public attention in the Bay region is focused on municipal stormwater from streets, roofs and parking lots, which is the fastest growing source of nutrient pollution to the Chesapeake. But industrial operations — those making all manner of products, from asphalt and chemicals to paper and even food, plus power plants, transportation terminals, sewage treatment plants and waste handling and recycling facilities — are required to have their own stormwater permits that regulate the harmful, and often toxic, runoff from their operations.

“Industrial stormwater in some ways has been ignored,” said David Flores, a policy analyst with the Center for Progressive Reform and co-author of the report. “It’s deserving of more attention.”

Until last year, Flores was the Baltimore Harbor Waterkeeper. While he lived there, in his individual capacity, he said he unofficially visited a number of supposedly regulated facilities in the city, and saw “piles of waste running off the site or piles of hazardous materials sitting uncovered, exposed to the elements.”

Among the toxic contaminants reported in stormwater discharges were excessive levels of copper, aluminum, zinc and lead, along with other pollutants that can be harmful if exposed to fish, or people.

A scrap recycling business in Salisbury reported copper in its runoff that was more than 15 times the permitted level, the report notes, while a similar business in East Baltimore had levels more than seven times the maximum.

“It’s really bad stuff,” said Rena Steinzor, a University of Maryland law professor and member scholar at the center. But because the state doesn’t require more tracking of discharges, she said, “Who knows what the exposure is?”

One in seven of the facilities required by the state to report their discharges failed to do so, the groups’ analysis found, and 40 percent of those that did submitted incomplete or partial data. What’s more, the vast majority of facilities weren’t even required to report about their stormwater discharges into local waters.

“You can’t tell how much of an impact it’s having because you’re not requiring measurement of the flow,” said Sylvia Lam, an attorney with the Environmental Integrity Project and another co-author.

The groups blame the “general permit” that the Maryland Department of the Environment (MDE) issues to more than 900 industrial facilities statewide.

As the name suggests, its requirements are less specific and often less stringent than what facilities would have to do if they were covered by an individual pollution discharge permit. In fact, only 228 of those facilities were required to conduct and report on quarterly monitoring of their discharges. 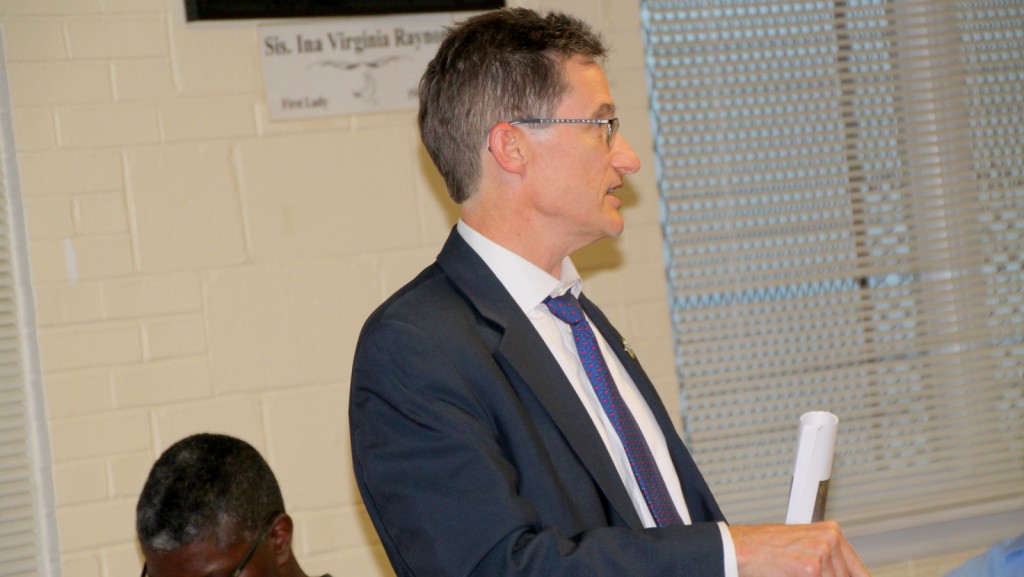 Maryland Environment Secretary Ben Grumbles addresses a a 2016 meeting in Northwest Baltimore on the sewage consent decree. (Fern Shen) BELOW: See statement from Grumbles on the industrial run-off report.

The Environmental Integrity Project and other groups had filed a legal challenge several years ago, alleging that Maryland’s general permit did not require enough action by the facilities. They lost in court. Now, Flores and Lam say, a review of information freely available on government databases and gleaned from state public-records requests bears out their concerns.

Some of the worst sites are auto salvage yards, scrap metal recycling facilities, and landfills, according to the report.

“By their nature, these operations have many toxic materials on-site,” it says, such as leaking car batteries, deteriorating metal parts, and eroding trash incineration ash waste, a condition that state inspectors discovered at Baltimore’s Quarantine Road Landfill.

The situation raises concerns for the health of residents in nearby communities. By mapping the regulated facilities, the groups found that low-income neighborhoods in eastern and south Baltimore, northern Anne Arundel County, Prince George’s County along the border with the District of Columbia, and Salisbury on the Eastern Shore, among others, are surrounded by the densest concentration of industrial stormwater sites.

Records indicate the state failed to take prompt action when violations occurred, the report says. From 2014 until this year, MDE inspectors visited only 54 percent of the 65 facilities that reported discharges exceeding permitted pollution levels. They inspected just 13 of the 31 facilities that had violated the state’s requirements by not filing reports.

In the 12 months ending in June, records show the MDE did inspect 292 of the more than 900 industrial sites with general stormwater permits, and found violations or noncompliance in 70 percent of the visits, the report says.

Yet it’s unclear what if anything was done about many of those violations. According to federal and state records, MDE and the state attorney general’s office have taken enforcement action against a total of 13 facilities covered by the industrial stormwater permit since 2014, the report said.

Among the facilities listed in the report for having excessive stormwater pollution levels is Baltimore Scrap Corp., a metal recycling business in the Curtis Bay area of the city that has been the subject of a 19-month enforcement action by the MDE since environmental groups tipped regulators to problems there in March 2016.

The Bay Journal reported on the case in October, as it raised questions about the state’s oversight of such facilities. State officials have been negotiating with the company for months, as have representatives of Blue Water Baltimore and the Environmental Integrity Project. Lam, the project’s lawyer, declined to comment on the case.

Two of them, the former Cambridge Iron & Metal Co. (renamed Canton Metal Recycling) in East Baltimore and North Point Recycling in Dundalk, also reported excessive discharges of metals and other pollutants, according to the report. 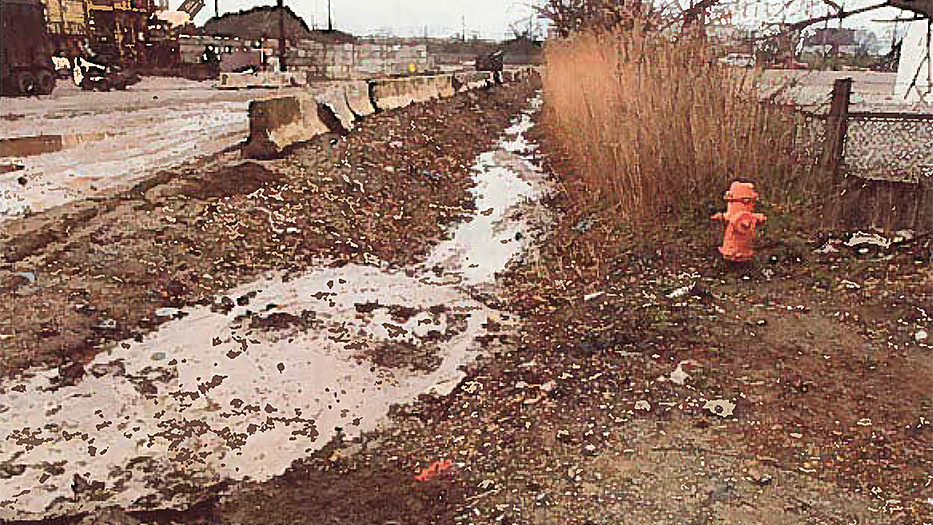 “There are a lot of big questions marks out there about compliance and levels of pollution discharging from these sites,” Flores said. Complete data aren’t readily available to the public, he said, but based on what the groups could dig up, “it’s not looking very good . . . unacceptable numbers of facilities are discharging excess levels of pollutants.”

The groups call for the Hogan administration and the General Assembly to increase funding for the MDE so it can hire and train more inspectors.

Over the years, the MDE’s water and science administration had lost 30 percent of its field staff, the report said. Lawmakers did provide $200,000 this year for the hiring of more inspectors, though it’s unclear if the recent staffing cuts have been fully restored.

The report urges the MDE to pursue “deterrence-based enforcement,” targeting its resources in neighborhoods with a concentration of such facilities. Enforcement has been a chronic problem with the MDE for years, contends Steinzor, through both Democratic and Republican administrations.

Part of it stems from staff and funding shortages, but she suggested if regulators took prompt public action against a few bad actors, others would take notice and get into compliance more quickly.

To improve compliance and enforcement, the report calls for regulators to strengthen the permit requirements. It recommends establishing fixed deadlines by which polluting facilities must take corrective actions when existing control measures aren’t working. Washington state and California, it notes, spell out an escalating series of steps facilities must take within a short time frame if excessive pollutant discharges continue.

Only six of 29 categories of industries covered by the general permit must do so now. In California and Washington, for example, the report says that all facilities must test their discharged stormwater for a baseline of pollutants and conditions, such as sediment, oil and grease, while specific sectors have to monitor for other pollutants.

Facilities in Washington must do additional testing for certain pollutants if they discharge into waters already impaired by those pollutants.

“Lead is a huge issue at landfills,” said Lam, “yet the [Maryland] general permit doesn’t require the landfill sector to even conduct benchmark monitoring for lead.”

Finally, the report calls for Maryland regulators to establish a publicly available reporting database for industrial facilities and require them to electronically submit updated pollution prevention plans and compliance reports on a quarterly basis. It also requests the MDE to join other states in posting inspection, enforcement and settlement data on an open website.

MDE Secretary Ben Grumbles issued a statement in response to the report, saying that his department is “committed to enforcing regulations that protect the environment and public health, including the management of stormwater runoff from industrial sites.”

Grumbles explained that the general permit sets numeric “benchmarks” to determine pollutant concentrations in runoff at the edge of a site, but that exceeding those benchmarks is not in itself a violation of the permit or necessarily show how much pollution will reach the Bay.

Rather, he said, the benchmarks are indicators of how well stormwater control measures are working, and they let the MDE staff focus on those sites where pollutant levels exceed the benchmarks, to ensure that they are taking steps to control runoff. He did not address why many sites reporting exceedances had not been inspected.

Regarding sites that have not conducted monitoring, Grumbles said the permit, which took effect in 2014, gave facilities up to three years to apply for coverage and to do benchmark sampling.