“She’s getting it done!” said one from Sunday on Facebook, which included photos of Pugh touring Baltimore schools where workers were trying to restore heat.

An earlier post by Tucker, also on the Baltimore City Voters Facebook page, shows the mayor with department heads at one of her daily violence reduction meetings.

“Addressing violence at its root causes and in real time,” Tucker proclaimed.

An item on today’s Board of Estimates agenda helps explain Tucker’s enthusiasm:

The spending board approved a three-month contract paying Tucker’s company as much as $40,000 for marketing and communication services for the mayor, with an option to re-up for another three months. 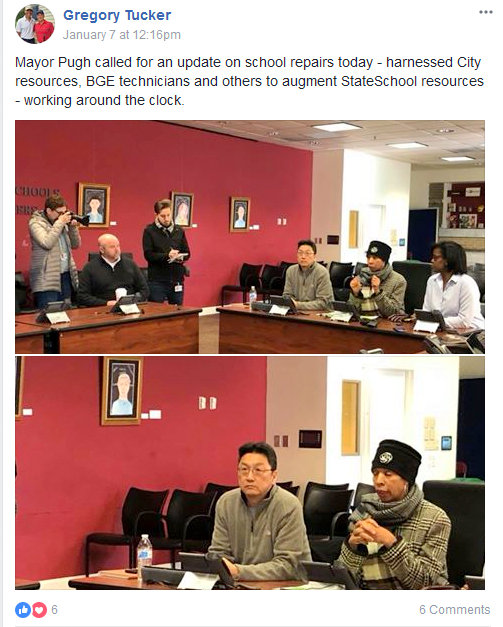 The Tucker Group LLC would provide “strategic consultation and tactical services for communications and the media” for Pugh under the agreement that took effect on January 1, 2018 – more than a week before the spending board’s approved it.

The item was approved without comment as part of the board’s routine agenda by Pugh and the other sitting members.

Asked today about his role in the Pugh administration, Tucker said he is helping steer communications in the wake of the departure last month of the mayor’s director of public affairs, Anthony W. McCarthy.

“As you know, Anthony left and that created an opportunity for the mayor to reconsider and determine what’s needed,” Tucker said.

“The city faces a lot of critical issues, and the idea is to make sure people have clarity about what the mayor’s office has been doing to address them.” 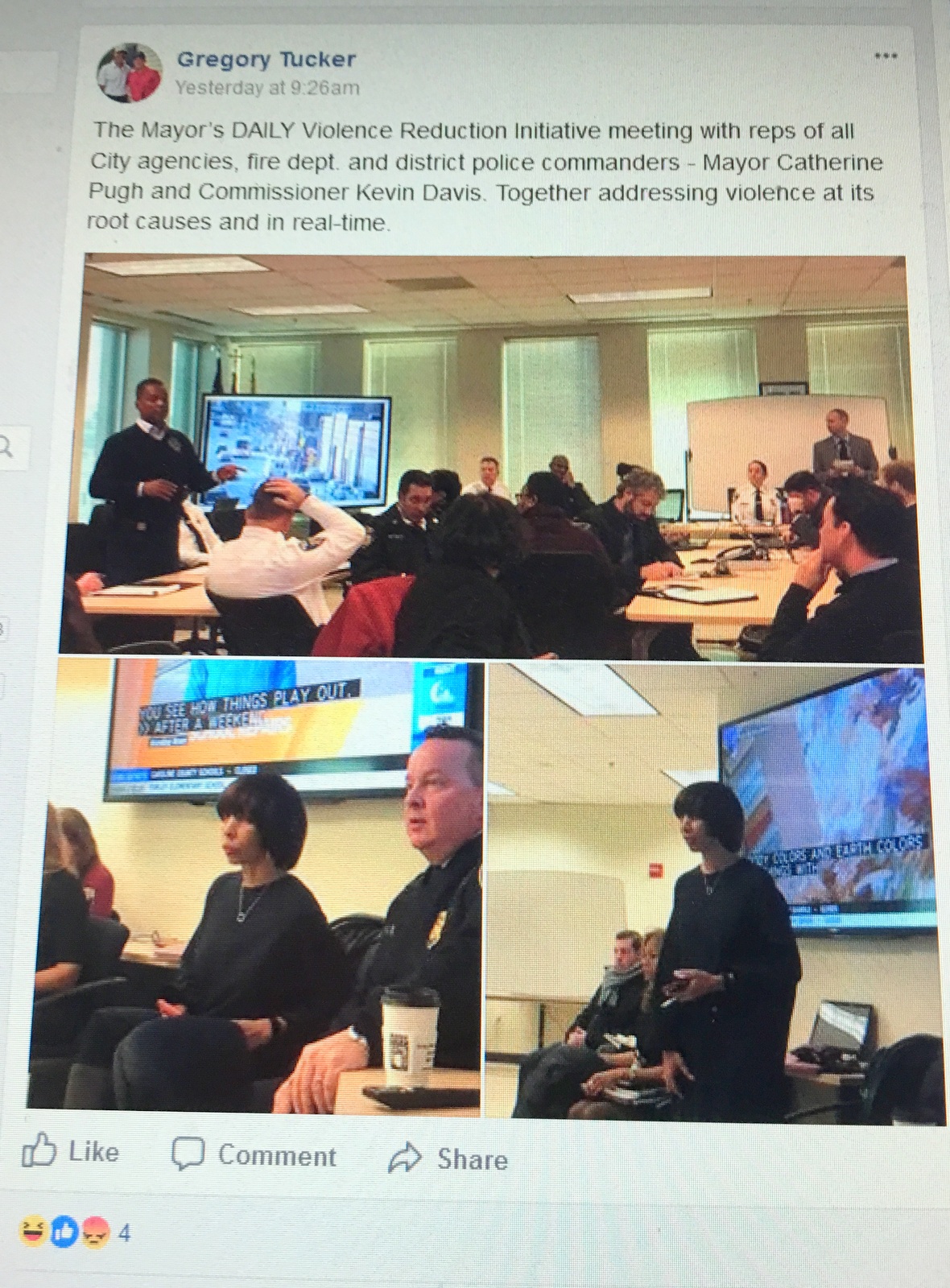 Asked when he began the work, Tucker said, “I’ve been doing that since January 1.”

So was Tucker on the clock when he joined the mayor for the morning meeting at City Hall? And the weekend school tour? He was reminded that those posting came before his contract approval today.

“I did that as a private citizen,” said Tucker, until recently a senior vice president at Transamerica, the retirement insurance and asset management company.

“I wanted to see what was going on with the schools myself – that’s an important issue – just to get oriented.”

Records on file with the state show that Tucker formed The Tucker Group LLC on January 1, 2018 – the same day that he was hired by the mayor’s office.

The LLC’s purpose, according to its incorporation records, is to provide “services related to strategic planning and reputational brand positioning.”

Tucker: No Connection to Campaign

Tucker, who lives in Guilford, said he first moved to the city in 1997 to be the head of communications for the Baltimore Symphony Orchestra.

As the voice of a sponsored content spot on WYPR-FM, Tucker may already be familiar to Baltimore area radio listeners.

“Glad to be back with you on Clear Path, your roadmap to health and wealth, brought to you by the Transamerica Institute” is how he begins each segment.

According to his LinkedIn bio, Tucker is on the BSO’s board of directors and is also a member of the board of trustees of the Living Classrooms Foundation.

Tucker said he came to know Pugh because “we sit on some of the same boards.”

Tucker said his work was not paid for by the committee to Elect Catherine E. Pugh, the mayor’s political fundraising organization, and that he has no connection to her re-election efforts.

“This has no connection to the campaign,” he said. “Why would you think that?”

Asked how his role meshes with that of Pugh’s existing Office of Communications, headed by interim director Amanda Rodrigues-Smith, Tucker said he wasn’t sure.

“We’ll figure that out,” he said, noting that he will not be a city government employee.

Tucker said he brings a 30-year career in marketing and communications to the job.