The original suit, filed last month in U.S. District Court, charges that county and university officials fail to take sexual assault reports seriously and that they “conspired” in some cases to cover them up.

Authorities humiliated, intimidated and deceived women as part of an intentional effort to “cover up justifiable complaints of sexual assault,” the complaint alleges.

The claims of the three former UMBC students, in addition to those of two initial plaintiffs, expand on that theme.

Plaintiff Marcella Fegler said she was incapacitated after drinking alcoholic beverages at a 2014 party and woke up with no memory of what happened.

She said she learned two months later that four members of the UMBC basketball team had sexually assaulted her while she was unconscious.

She was told the men had “run a train on her and pass[ed] her around,” according to the complaint.

UMBC expelled two of the men “who had admitted to Ms. Fegler, in an attempt to avoid an investigation, that they had taken advantage of  her,” the complaint said.

(The expulsions were the result of a breach of the campus code of conduct, UMBC said at the time, refusing to elaborate.)

None of the assailants was criminally charged.

Despite the men’s admissions, Baltimore County Police “conducted little to no investigation,” the suit says.

The lawsuit faults UMBC  for refusing to hold accountable the assailants who did not admit they raped Fegler.

“Even with [the two men’s] admissions, defendant BCPD conducted little to no investigation,” the suit alleges, and police interviewed only three of the four assailants.

A detective “dismissed Ms. Fegler’s assault, informing her that ‘in order for some of the sex acts,’ which Ms. Fegler could not recall, ‘to be performed, she would have had to be conscious to participate.’”

That detective, according to the complaint, “offered to testify on behalf of the assailants, that the assailants were ‘not involved as alleged.’”

UMBC officials today declined to discuss the specific allegations, citing “the privacy of our students.”

“It is the practice of the campus in all cases to handle the matter diligently, equitably, and consistent with university, state, and federal policies and procedures,” spokeswoman Dinah Winnick said in an emailed statement.

“Cases are managed by expert investigators and we receive assistance from the Office of the Attorney General of Maryland,”  the statement continued. “Findings made through the university’s adjudication process have resulted in serious disciplinary actions, including the suspension and expulsion of students.” 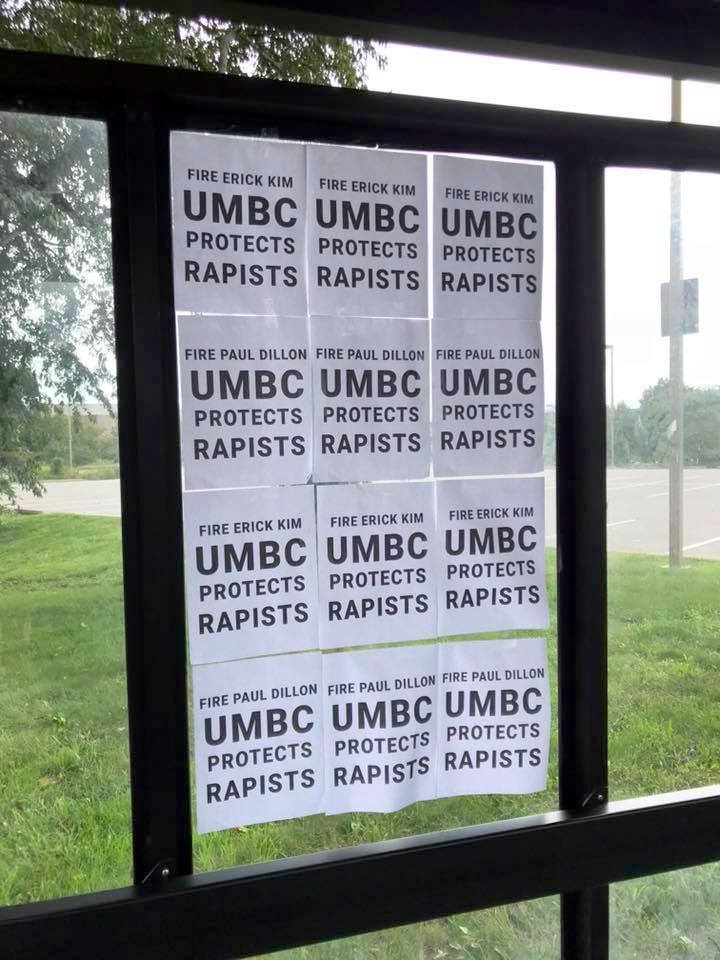 The new allegations are the latest development in a case that has roiled the campus since news of the original complaint broke in September. Students put up protest signs on campus and held demonstrations, charging that the issue has been mishandled by UMBC for years.

After students marched to his office, University President Freeman A. Hrabowski III apologized and said the school would “do better.”

A “listening session” with Hrabowski was held that drew about 1,000 students to a campus theater and overflow space. A committee composed of faculty, students and administrators was formed to guide the school’s response.

Despite student calls that he be fired, UMBC police chief Paul Dillon remains on the job and recently sought dismissal of the lawsuit’s claim against him.

Baltimore County police and prosecutors have declined to comment on the lawsuit.

Another new plaintiff in the case was allegedly sexually assaulted by her graduate student lab partner in 2016.

According to the complaint, the woman told her assailant “wait” and “we shouldn’t be doing this,” but he responded, “You know you want it” and proceeded to sexually assault her.

UMBC retained an attorney who specializes in defending universities in such cases. The attorney concluded that the woman had been sexually assaulted based on the alleged assailant’s own words.

The lawyer, however, counseled the university not to expel the assailant, but to instead ask him to undergo a single counseling session.

The attorney “essentially reduced the victim’s sexual assault to a ‘learning experience’ for her assailant,” the lawsuit argues.

Neither the attorney nor UMBC reported the assault to Baltimore County, the suit added.

Annemarie Hendler and fellow Towson University classmate Anna Borkowski (one of the original plaintiffs in the case) allege they were sexually assaulted by three members of UMBC’s baseball team in the early hours of October 20, 2017.

Heavily intoxicated, unconscious or semi-consicous during the assault, the women experienced pain later that day and told campus police that they had been sexually assaulted, the complaint says.

Less than 24 hours after the assault, the case was “inexplicably closed for ‘exceptional circumstances.’”

Subsequent actions by county police and prosecutors, the complaint alleges, were an attempt to pressure Borkowsi into dropping efforts to pursue charges and to cover-up a botched investigation.

Among the allegations – that an assistant state’s attorney who maintained “constant communication” with UMBC’s attorney “short-circuited the legal process” in Borkowski’s case “because the assailants’ (and therefore UMBC’s) baseball schedule was adversely affected by the criminal charges.”

Lawsuit: prosecutor worked with UMBC to “short-circuit” the legal process because “the baseball schedule was adversely affected by criminal charges.”

The other original plaintiff in the lawsuit, Katelyn Frank, said she was raped by another student on campus in 2015.

A nurse at GBMC found “extensive bruising” and reported the assault to BCPD, which then recorded it as a “suspicious circumstance,” not as rape, and failed to create an incident report.

The suit alleges that Dillon “improperly persuaded” Frank not to report the assault to county police.

Dillon allegedly convinced Frank and her mother “that ‘the administrative method’ was ‘faster,’ ‘easier,’  ‘more victim-friendly’ and was ‘easier to prove.’”

Dillon, in his motion to dismiss the lawsuit, disputes that account.

Months later, university officials cleared the suspect of wrongdoing. When Frank re-reported to rape to county police, they found no record of the rape allegation in the university’s records because it had been reported as a “suspicious condition.”

Also because of the way her attack was classified, evidence from the rape kit was destroyed after 30 days.

The reported but unrecorded sexual assault, the complaint notes, did not appear in UMBC’s reports to comply with the Clery Act, which requires universities that receive federal funding to disclose crime statistics on or adjacent to their campuses.