“We believe this was a random act of violence,” interim Police Commissioner Gary Tuggle said, speaking to reporters at Baltimore Police headquarters.

Tuggle said seven cars were set on fire and that the flames spread to two vehicles.

For neighborhood residents, the fires and explosions that sent a shower of window glass onto sidewalks at about 3 a.m. turned their relatively quiet neighborhood into something resembling a war zone. 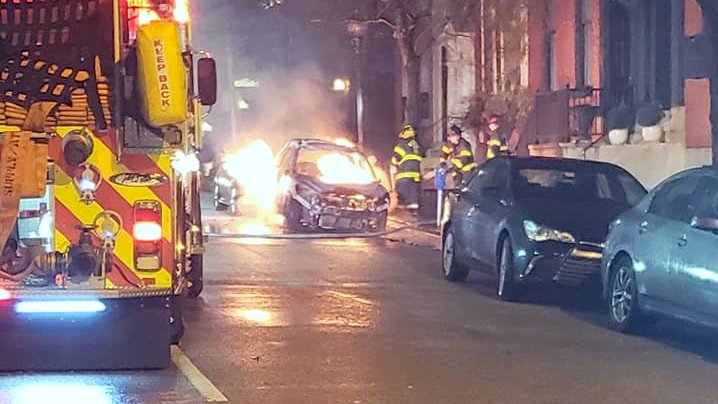 Residents were awakened to the sight – and explosive sound – of multiple cars burning in Mt. Vernon. (Billy Henderson Facebook)

Across Baltimore, news of the explosions were one more grim reminder of another violent week in which the city officially passed the 300 homicide benchmark for the fourth year in a row.

The bloodshed continued last night in the busy Fells Point bar district when a man was fatally shot just after midnight inside the Blarney Stone Pub in the 700 block of South Broadway.

The fires and explosions turned a relatively quiet neighborhood into something resembling a war zone.

Asked about the persistent violence, Tuggle said all murders are treated by BLD with “urgency,” but asked the public for patience.

“Crime in Baltimore didn’t come to this level overnight, and it’s not going to be fixed overnight,” he said.

He noted that homicide is down by 10% in Baltimore compared to 2017. “I am encouraged by these incremental steps we’re taking,” he said.

Responding to the firebombed cars in his district, Councilman Eric T. Costello posted updates on social media with details that differed slightly from those provided by Baltimore police.

“Early this morning around 3 am in Mount Vernon, there were 6 vehicles lit on fire, centering around the North Charles St. corridor, near Eager Street,” he wrote. “This led to 3 other vehicles catching fire.”

According to Costello, the first “event” involved a vehicle on “North Charles Street @ Penn Station – 1 vehicle.

The remaining events, he said, were as follows:

Along with photos of the burned out vehicles, now charred shells, the Mount Vernon-Belvedere Association took to social media to encourage residents to contact police with any information or security camera footage.

“These criminal acts of vandalism are unacceptable and horrendous,” association leaders said on Facebook.

Tuggle said BPD is reviewing surveillance camera footage and working with the Bureau of Alcohol, Tobacco, Firearms and Explosives to investigate the incident.

He told reporters that police have no suspect so far and, asked to describe exactly what happened, replied with a simple summation:

“Somebody took an accelerant and put it on a number of cars.”